Although penile cancer (PC) is a rare cancer in North America and Western Europe, its incidence is much higher in some regions of South America, Asia, and Africa [1]. Despite recent progress in multimodal therapies, the clinical outcome of PC still remains unsatisfactory, as the survival of PC patient has not improved during the last two decades [2]. Serum-based tests have already been developed for cancer, which has been proven to be a promising noninvasive tool that aids in cancer diagnosis, disease monitoring and prognosis assessment. Serum cancer biomarkers including CEA, AFP, CA125, CA19-9 and CA15-3 have been very useful to assist cancer diagnosis and disease monitoring in various cancers [3-5]. However, these serum cancer biomarkers are not very useful in PC. Although Squamous Cell Carcinoma antigen (SCCa) levels were found to be correlated with tumor burden of PC, it could not predict the clinical outcome [6]. Recently, serum LAMC2 was shown to play a critical role for aggressive tumor behavior and might predict poor survival in PC [7].

In addition to their physiological roles, CCLs have also been implicated in cancer development. Aberrant expression of CCLs has been documented in many cancers. CCL2 is overexpressed in liver, breast, gastric, and thyroid cancer [11]; CCL5 is overexpressed in gastric, pancreatic, breast, colorectal, prostate, liver, and thyroid cancer [12]; CCL7 is markedly upregulated in lung, gastric, colorectal, and uroepithelial cancer [13]. Recently, increased CCL19 expression is associated with malignant progression of prostate, colorectal, lung, and cervical cancer [14, 15]. However, there is a paucity of information on the expression and clinical significance of CCLs in PC. Herein, we aimed to examine the expression of CCLs in PC tissues, and evaluate the usefulness of serum CCLs as a potential cancer biomarker for PC.

The patients (n=76) included in this retrospective study were performed surgery and diagnosed with PC (2016-2018) at Xiangya Hospital, Central South University. Patients with prior chemotherapy or brachytherapy history were not qualified for the study. Blood samples were collected 1 day prior to surgery (preoperative) or at day 28 after surgery (postoperative). Serum samples were separated and stored at -80 ºC for later analysis. Serum samples of healthy male donors (n=46) were obtained from Health Examination Center (Xiangya hospital, Central South University) with informed consent. This study was approved by the Research Ethics Committee of Xiangya Hospital Central South University (Rev.No. 201805847). Written informed consent was obtained from the patients and participants. The clinical parameters of PC patients included age, stage, nodal status/distant metastasis, histological subtype, pathological grade, and body mass index (BMI) as well as phimosis, etc. TNM staging was assigned with reference to the American Join Committee on Cancer, 8th edition [16]. All patients were prescribed a follow-up regimen based on the National Comprehensive Cancer Network guidelines, with physical examination every 3-6 months depending on nodal stage [17].

Fresh PC and matched adjacent penile tissues (AT) (n=23) were obtained from Department of Urology, Xiangya Hospital Central South University with informed consent. The mRNA levels of CCL20 in PC and AT were analyzed using real-time PCR as we described previously [19]. Briefly, total RNA was extracted from tissues using TRIzol reagent and further purified using the QIAGEN RNeasy kit (Germantown, MD, USA). Total RNA (1µg) was used to generate cDNA, which was then used for the quantitative PCR using Invitrogen SYBRGreen PCR assays (Carlsbad, CA, USA). Relative gene expression was determined based on the threshold cycles (Ct values) of the CCL20 and of the internal reference gene β-Actin. PCR Primers for CCL20 and β-Actin are listed as follows:

The relative gene expression (RE) was calculated as the fold change relative to internal reference, which was based on the following equation:

The serum CCL20 levels of the aforementioned PC patients (n=76) and healthy male subjects (n=46) were measured using Abcam CCL20 ELISA kit (Cambridge, MA, USA) according to the manufacturer's manual. The secretions of CCL20, MMP2 and MMP9 into the media collected from cell cultures were also determined by ELISA.

Cell apoptosis was determined by Caspase-3 Colorimetric Assay [22]. Briefly, PC cells (5×105 cells) were lysed and centrifuged, followed by enzyme reactions with chromogen. The absorbance was measured at 405 nm wavelength.

Clonogenesis assay was conducted to measure the clonogenic potential of PC cells as we described previously [23]. Briefly, PC cells were seeded in 6 cm culture dishes, and grown for 12 days. The number of colonies (contains >50 cells) was counted.

Cell migration ability was measured by wound healing assay as we described previously [19]. Briefly, after PC cells were grown fully confluent, a uniform scratch was made for each experiment group. The distance between the wound sides was measured immediately after the scratch or after 24 hours.

Cell invasion ability was measured by transwell chamber as we described previously [20]. The invaded cells on the bottom surface of the 8 µm pore membrane were stained by 0.2% crystal violet. The stained cells were eluted by acetic acid and measured with a MK3 microplate reader (Thermo Scientific, USA) at 570 nm.

GEO dataset GSE57955 could be downloaded from NCBI GEO website (https://www.ncbi.nlm.nih.gov/geo/query/acc.cgi?acc=GSE57955). Gene expression data were processed and analyzed as described previously [24]. Genes with a mean log2 signal ratio (penile cancer/normal glans pool) of ≥ 1.0 and ≤ -1.0 within a 99% confidence interval were considered differentially expressed.

A total of 76 men diagnosed with PC were enrolled in this study. Detailed summary of patient and tumor characteristics including treatment plan, TNM stage, histological subtype and pathological grade was shown in Table 1. Serum CCL20 levels were measured in healthy control (male) and PC patients. Preoperative serum CCL20 level was significantly higher in PC cohort (70.4 ± 69.3 pg/ml) than those from healthy male subjects (16.6 ± 11.8 pg/ml) (P < 0.001, Fig. 2A). The area under the curve (AUC) was 0.855 with the sensitivity of 72.4%, and specificity of 93.5% to distinguish penile cancer (Cutoff =28.8 pg/ml, Fig. 2B). Moreover, Serum CCL20 levels were significantly decreased after PC surgery (P = 0.004, Fig. 2C). 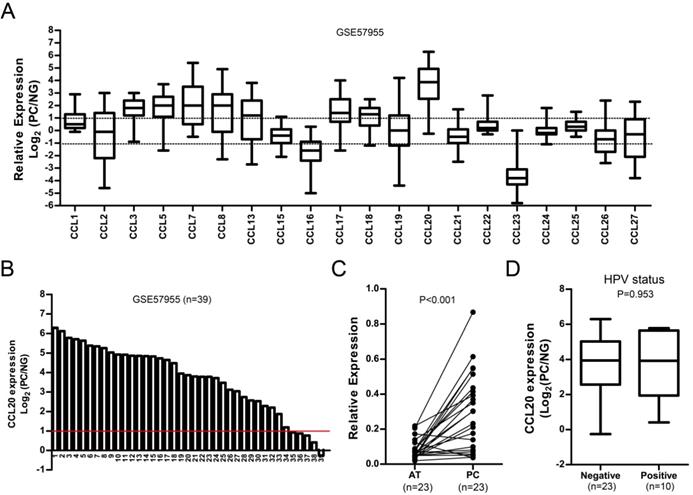 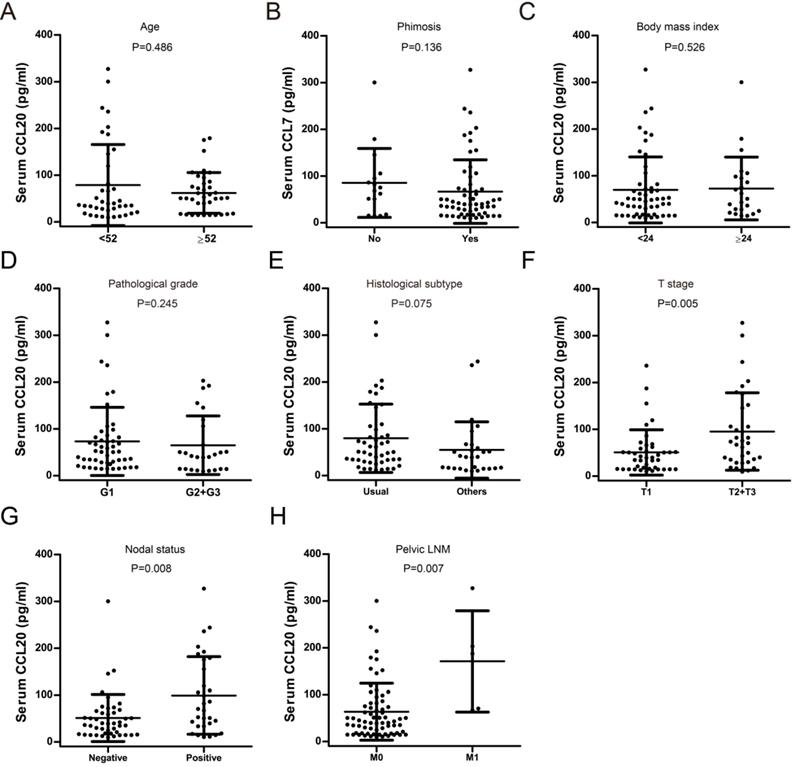 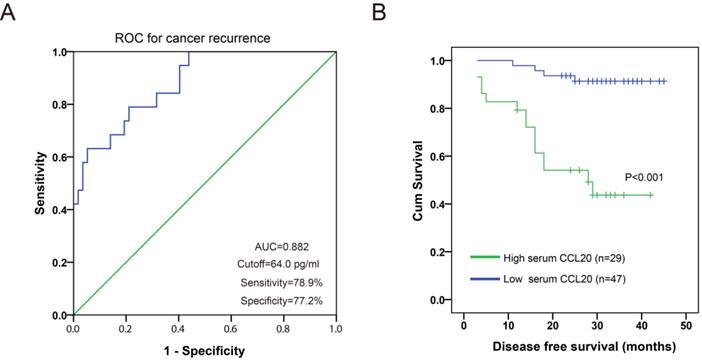 Expression of CCL20 in normal penile tissues and PC tissues 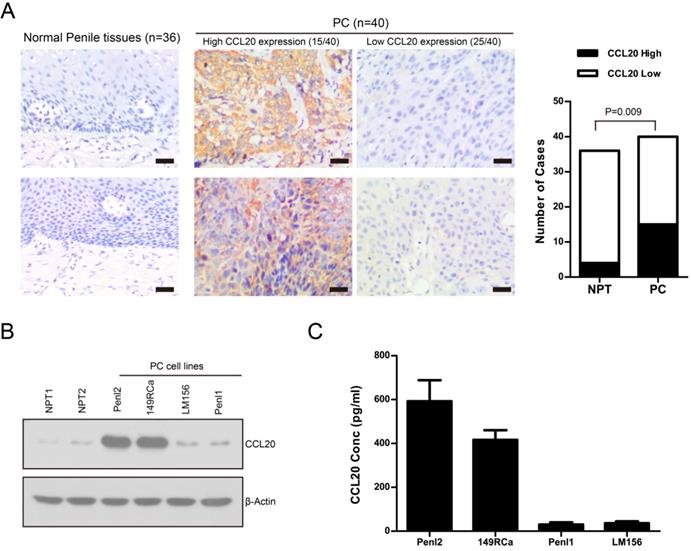 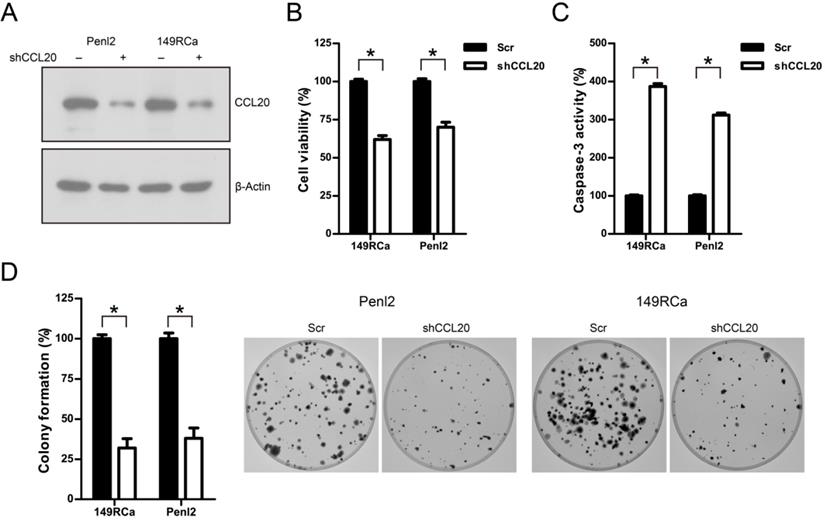 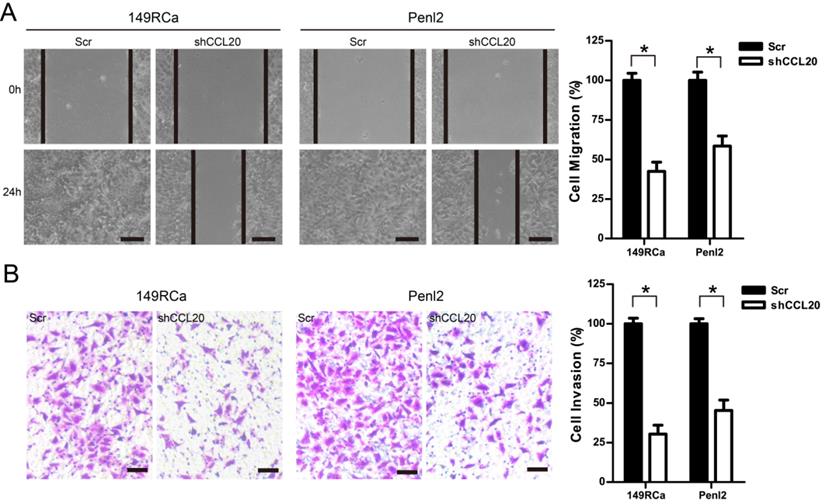 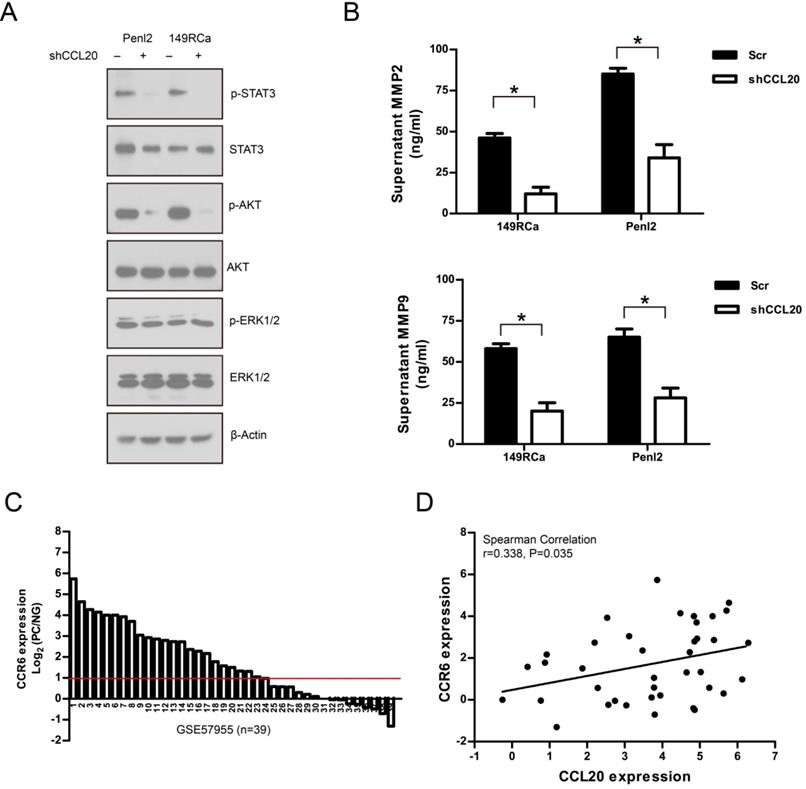 Chronic inflammation contributes to proliferation and survival of tumor cells, angiogenesis and metastasis via multiple mechanisms [25]. Understanding inflammation -related mechanisms may help to identify potential target for therapeutic intervention. Chemokine CCL/CCR signaling within the tumor microenvironment of many cancers is known to enhance tumor progression via activation of signaling pathways promoting proliferation, angiogenesis, migration, invasion and cell survival [26]. However, the expression patterns as well as functions of these CCLs still remain poorly understood in PC. To our knowledge, our study may be the first to analyze the expression patterns of CCLs in PC. Our analysis showed that several CCLs (CCL3, CCL5, CCL7, CCL8, CCL13, CCL17, CCL18 and CCL20) were remarkably upregulated in PC, suggesting these CCLs might play an important role in PC carcinogenesis. Further study would be necessary to investigate the possible oncogenic function of these CCLs in PC.

CCL20, also known as macrophage inflammatory protein 3 Alpha (MIP-3α), is a chemotactic factor and attractant for lymphocytes and neutrophils [27]. Recently, the expression and clinical relevancy of CCL20 in human cancers has been documented by a number of studies [28-30]. Serum CCL20 was identified as independent prognostic markers for colorectal cancer, which also exhibited a good performance in the diagnosis of early stage disease [31]. Serum CCL20 level was also shown to be increased markedly in patients with esophageal cancer, and was associated with cancer occurrence and metastasis [32]. In nasopharyngeal carcinoma, serum CCL20 level was significantly higher in untreated patients, recurrent patients and patients with distant metastases [33]. Serum CCL20 may also be used for the detection of hepatocellular carcinoma in HCV-infected patients with comparable specificity and higher sensitivity than Alpha fetoprotein (AFP) [34]. Herein, we identified CCL20 as top CCL highly expressed in PC in GSE57955 dataset. HPV is an important contributing factor for about 30~40% of PC [35]. However, our findings did not reveal the association between CCL20 expression and HPV status, suggesting aberrant CCL20 expression in PC might not be caused by HPV infection. Some studies on other cancers suggested that CCL20 expression might be driven by cancer-related signaling including nuclear factor-κB and RANK/RANKL [36, 37]. However, how CCL20 is upregulated in PC still awaits further investigation.

CCL20 has been recently correlated with malignant phenotypes (uncontrolled cell proliferation, invasion, metastasis, etc.) in many cancers. In endometrial cancer, CCL20 mediates RANK/RANKL-induced epithelial-mesenchymal transition (EMT) and tumor metastasis [36]. In ovarian cancer, CCL20 could promote tumor progression in the peritoneal cavity [37]. CCL20 could also promote cell proliferation and metastasis in laryngeal cancer [38]. In this study, we showed that CCL20 expression could be detected in PC tissues, cell lines and culture supernatants, suggesting CCL20 might act in an autocrine manner in PC. Further, we showed that knockdown of CCL20 suppressed cell proliferation, apoptosis escape, clonogenesis, migration and invasion in PC cell lines, suggesting CCL20 might be crucial to regulate tumor progression in PC.

Multiple oncogenic signaling pathways including STAT3, PI3K/AKT, and metaloproteinases MMP2/9 contribute to PC carcinogenesis. Stankiewicz and Chaux et al. showed that AKT expression positively correlated with tumor grade and prognosis of PC [39, 40]. Yang et al identified STAT3 as one of the top oncogenic pathways upregulated in PC [41]. Campos et al indicated that high MMP-9 expression was an independent risk factor for disease recurrence in PC [42]. Our present findings reveal that knockdown of CCL20 attenuated AKT and STAT3 signaling and reduced MMP2/9 secretion, suggesting the effect of CCL20 might result from its function in activating oncogenic signaling pathways (STAT3, AKT) and enhancing the expression of metastasis-related MMP2/9, thus promoting the tumor progression of PC. Nevertheless, CCL20 expression was significantly correlated with its receptor CCR6 in PC, suggesting CCL20/CCR6 signaling might play a crucial role in PC carcinogenesis. Although CCL20 is known to induce ERK1/2 signaling in lung cancer cells [43], we did not observed the attenuation of ERK1/2 signaling following knockdown of CCL20 in PC cell lines, suggesting that CCL20 signaling might activate differential downstream signaling dependent in specific cancer types.

In conclusion, we have shown that serum CCL20 is closely associated with tumor progression and might serve as diagnostic and prognostic biomarker for PC. Further, CCL20 might activate multiple downstream oncogenic signaling (STAT3, AKT, MMP2/9) to promote malignant phenotypes in PC. New discoveries in the CCL20 signaling would also aid clinical decision-making for PC patients, bringing us closer to the promise of translational precision medicine.