Objective: To evaluate the prognostic value of conversion of high-risk human papillomavirus (HR-HPV) status after treatment for cervical cancer.

Methods: A total of 112 cervical cancer patients with HR-HPV positivity without distant metastasis treated with surgery or radical concurrent radiochemotherapy were enrolled. HR-HPV status was analyzed before and after treatment and at the time point of recurrence or metastasis. Log-rank tests and Cox proportional hazard models were used to evaluate the association between conversion of HR-HPV status after treatment and survival.

Conclusion: ncHR-HPV after treatment in cervical cancer patients indicated better PFS and OS, while ppHR-HPV indicated worse prognosis and high risk of recurrence or metastasis. For patients with ncHR-HPV after treatment, continued HPV screening may not predict recurrence or metastasis. This study suggested that HR-HPV monitoring is necessary for ppHR-HPV patients after treatment but may not be for ncHR-HPV patients. However, further large and multi-center prospective studies should be performed to confirm these findings.

Cervical cancer is one of the most common gynecologic cancers worldwide and causes thousands of cancer-related deaths in women, and there are about 500,000 new cases of cervical cancer in the world each year [1]. China accounts for about one-third of the world's total annual new cases [2]. Despite advances in treatment development during the past decade, 20% to 40% of cervical cancer patients will still have local recurrence or distant metastases, especially during the initial two years after treatment [3-4]. As it is well known, the International Federation of Gynecology and Obstetrics stage (FIGO stage) is a prognostic factor of cervical cancer, but significant differences in prognosis are often observed for the same stage. Therefore, it is necessary to seek additional biomarkers with significant clinical prognostic value for cervical cancer.

Infection with human papillomavirus (HPV), especially with high-risk HPV(HR-HPV), including HPV16, 18, 31, 33, 35, 39, 45, 51, 52, 56, 58, 59, 68, 73 and 82, is the most important risk factor associated with cervical cancer [5-7]. It has been reported that more than 90% of patients with invasive cervical carcinoma were infected with HPV [8]. In the past years, a large number of studies focused on the correlation between HPV status before treatment and prognosis in patients with cervical cancer [9-13]. Though some studies have shown that cervical cancer patients with HR-HPV positive could become negative after treatment (negative conversion), few studies were concerned with HR-HPV status after treatment. Intharaburan et al. reported that HPV positive after treatment was associated with persistent and recurrent disease and this oncogenic virus may be was a biomarker for pelvic recurrence [14]. However, the prognostic value of the negative conversion HR-HPV (ncHR-HPV) is yet to be reported. Therefore, we assessed the association of the ncHR-HPV with overall survival (OS) and progression free survival (PFS) in cervical cancer patients. Additionally, the association between persistent positive HR-HPV (ppHR-HPV) after treatment and recurrence or metastasis in cervical cancer was evaluated.

For this retrospective study, we collected data of cervical cancer patients who had been diagnosed with HR-HPV positive before treatment in The Affiliated Suzhou Hospital of Nanjing Medical University. Inclusion conditions: (1) Cervical cancer was confirmed by pathology. Patients received surgery or radiotherapy or chemotherapy according to the National Comprehensive Cancer Network (NCCN) Cervical Cancer guidelines. (2) HPV of the patients was positive and the classification was clear before treatment. (3) There is no history of HPV vaccination. (4) No distant metastasis was confirmed by imaging examination. Exclusion criteria: (1) Patients with no pathology. (2) HR-HPV was negative or unclear before treatment. (3) Patients without HPV test after treatment. (4) Patients who lost follow-up and did not follow up regularly. (5) Patients have suffered from other malignant tumors in the past. All patients were confirmed in accordance with the pathologic evidence and had the Karnofsky Performance Status (KPS) of more than 70. Staging was based on the criteria of FIGO 2009. The basic information of these patients was collected, including age, clinical stage, pathological classification, and treatment regimen. Patients were divided into two groups with ncHR-HPV and ppHR-HPV respectively depending on conversion of their HPV status before and after treatment.

All procedures performed were in accordance with the ethical standards of the responsible committee on human experimentation (institutional and national) and with the Helsinki Declaration of 1964 and later versions. This study was approved by the Institutional Review Board of The Affiliated Suzhou Hospital of Nanjing Medical University (No. KL901060). Informed consent was obtained from all individual participants included in the study or their family.

Patients with early-stage cervical cancer (FIGO stage IB1-IIA) underwent radical hysterectomy and pelvic lymph node dissection. Postoperative pelvic radiotherapy ± concurrent chemotherapy was administered to patients at high risk for recurrence. Patients with locally advanced cervical cancer (FIGO stage IIB-IV) underwent concurrent radiochemotherapy (CCRT). External beam radiotherapy (EBRT) was delivered to the whole pelvis with 45-50Gy in 25 fractions for the postoperative patients. In the definitive setting, HDR ICR was delivered twice a week in 5 fractions, with a total dose of 30Gy. The prescription of dose was given to point A. The cisplatin with 75mg/m2 was administered for two courses during radiotherapy.

Association between ncHR-HPV and clinicopathologic features

OS and PFS according to the HR-HPV conversion status

Kaplan-Meier analysis shows the PFS for patients with cervical cancer. 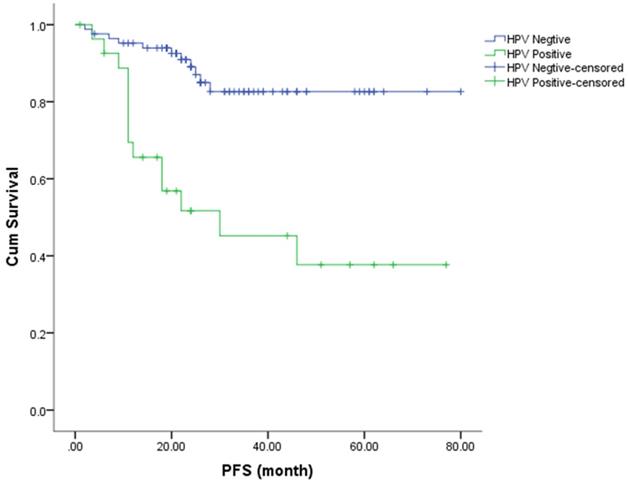 Kaplan-Meier analysis shows the OS for patients with cervical cancer. 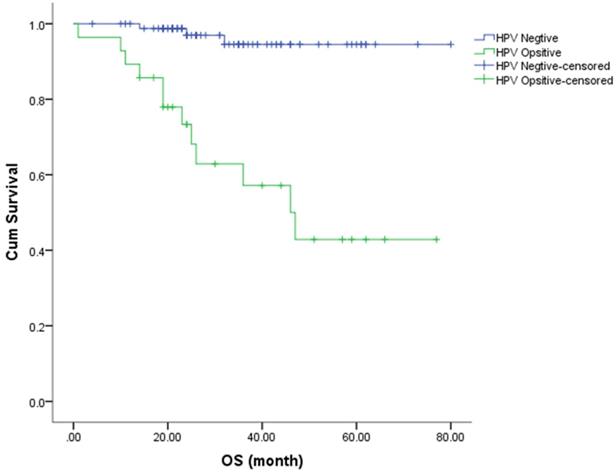 HR-HPV status after treatment and recurrence or metastasis

However, few studies focus on the relationship between conversion of HR-HPV status after treatment and prognosis in patients with cervical cancers. Only four studies with good quality assessment involved HPV status before and after treatment. However, vast variation in the HPV detection rate was observed in these studies [21]. Methods of HPV detection and radiotherapy may be attributed to the disparities, because three of the four studies were performed 10 years ago. Only one study by Mahantshetty et al. was conducted in the last 3 years, however HPV16/18 was defected but not all the HR-HPV and the follow-up was only 2 years [22]. In our research, we found that ncHR-HPV was associated with better OS and PFS for cervical cancer. The patients with ppHR-HPV demonstrated worse outcome. We speculated that patients with persistent HPV infection may be insensitive to treatment or already have micrometastases. Besides, patients with persistent HPV infection may have increased risk of developing disease recurrence. Nagai et al. reported that persistence of HPV infection was an alarm for disease recurrence after therapeutic conization for CIN 3 [23]. This may be because persistent HPV infection can up-regulate the expression of HPV E6/E7 oncogene and thereby initiate carcinogenesis [24]. HPV E6/E7 oncogene can degrade p53 and inactivate pRb, which maintain the growth of tumors.

Since patients whose HR-HPV status was changed to negative had a better prognosis, would that mean that we should need to take interventions for patients with persistent HP-HPV infection? HR-HPV persistence has the ability to effectively downmodulate innate immune response and can delay the development of adaptive immunity. Then, delayed immune response to HR-HPV increases the probability to transform epithelial cells. At this stage, elimination of the virus can never prevent cancer development [25-26]. This indicates not only the preventive HPV vaccination, but also therapeutic HPV vaccines, which can induce cellular immune response against HPV oncoproteins and eliminate malignant cells expressing HPV proteins are urgently needed. Currently, several therapeutic vaccines, including recombinant protein vaccines, peptide vaccines, chimeric vaccines, nucleic acid vaccines are being studied for efficacy and safety [27-29]. We look forward to the early clinical use of these vaccines.

There were some limitations in this study. Firstly, this study was a retrospective study with a small sample size, so a prospective study with a larger sample size should be needed to further validate the current conclusions. Another limitation of this study was that we did not analyze the impact of different HPV genotype and multiple genotypes of HPV. Chennai et al. reported that infection with multiple genotypes was associated with poor prognosis and early recurrences in comparison to a single genotype [30]. However, this study indicated that molecular detection of HR-HPV conversion status may facilitate early diagnosis of residual and early recurrent cancers after radiotherapy.

In conclusion, this study demonstrated that ncHR-HPV after treatment in cervical cancer patients indicated better PFS and OS, while ppHR-HPV indicated worse prognosis and high risk of recurrence or metastasis. Therefore, we suggest that HR-HPV monitoring is necessary for ppHR-HPV patients after treatment but may not be for ncHR-HPV patients. However, further large and multi-center prospective studies should be performed to confirm these findings.

All procedures performed were in accordance with the ethical standards of the responsible committee on human experimentation (institutional and national) and with the Helsinki Declaration of 1964 and later versions. This study was approved by the Institutional Review Board of The Affiliated Suzhou Hospital of Nanjing Medical University (No. KL901060).