Objectives: This study investigated plasma exosomal miRNA-139-3p as a blood-based biomarker for the early diagnosis and metastasis monitoring of colorectal cancer (CRC).

Patients and Methods: Exosome-rich fractions were isolated from the plasma of 80 CRC patients, and 23 controls using a kit method. We then used real-time polymerase chain reaction (RT-qPCR) to detect miR-139-3p levels in all subjects to evaluate expression levels and the predictive value of plasma exosomal miR-139-3p in CRC. We also collected clinicopathological data to explore correlations between abnormal miR-139-3p expression and clinicopathological parameters.

Conclusion: Our findings show that decreased exosomal miR-139-3p expression levels in CRC patient plasma may act as a novel biomarker for the early diagnosis and metastasis monitoring in CRC.

Globally, CRC is a major factor in cancer mortality and morbidity [1]. When initially diagnosed, approximately 21% of patients will have metastatic disease, and over 50% will develop metastases in the course of the disease [2]. These factors make CRC one of the deadliest classes of cancer. Therefore, screening procedures are essential in reducing CRC morbidity and mortality. Currently, several CRC screening method exist: stool testing, carcinoembryonic antigen (CEA), colonoscopy, colonography, computed tomography (CT), and double-contrast barium enemas for detecting cancer and precancerous lesions [3]. However, some of these methods are invasive, or have limited sensitivity and specificity. To address these clinical challenges, reliable and non-invasive diagnostic biomarker discovery is paramount.

Exosomes are nano-sized vesicles (30-150 nm in diameter), released into the extracellular environment by the fusion of multivesicular bodies with plasma membrane, in the blood [4]. They are surrounded by a lipid bilayer, which carries a variety of biomolecules including, glycans, proteins, metabolites, lipids, DNA and RNA [5]. Several studies have shown that exosomes express high levels of miRNAs, and that they contribute to chemo-resistance, immunomodulation and metastasis in various tumor types [6]. Similarly, previous studies have indicated that cells actively secrete miRNAs into the extracellular environment via exosomes, and that these molecules function as biological messengers, communicating between cells [7-9]. It is believed that exosomal miRNAs reflect some of the physiological changes and disease progression mechanisms in the human body. Moreover, the exosomal outer membrane prevents RNA degradation during in vivo circulation. Therefore, the discovery of effective biomarkers in exosome cargoes for early detection of cancer has aroused widespread interest in the scientific community.

In this study, we selected the plasma exosomal miRNA (miRNA-139-3p), identified by RNA sequencing. We investigated and validated this marker in 80 CRC patients, and 23 healthy controls, and evaluated its diagnostic potential by comparing clinical and pathological characteristics in these patients. Our data suggests that plasma exosomal miRNA-139-3p can be used as a complement to existing biomarker predictors to advance the differential diagnosis of CRC.

We collected peripheral blood samples from patients with CRC who underwent surgical resection at Tongji Hospital of Tongji University, from July 2016 to April 2018. All patients were confirmed by pathologist after operation. The ethics committee at Tongji Hospital approved this study, allowing us to obtain informed consent from each patient, prior to study commencement. All patients signed consent sheets. We finally recruited 80 colorectal cancer patients, and 23 healthy controls. Each blood sample was processed within 30 min of collection. All samples were centrifuged for 15 min at 3000×g at 4 °C, and then pumped and stored at -80 °C. Following the AJCC Cancer Staging Manual, (7th edition, 2009) [10], patients were classified into groups with or without metastasis. In addition, we collected relevant clinical data from patients including age, gender, depth of invasion, tumor location and lymph node metastasis.

Plasma exosomes were extracted by ExoQuick-TCTM (SBI, Palo Alto, CA) kit method. After frozen plasma samples were equilibrated to room temperature, samples were centrifuged at 3000×g for 15 min to remove residual cells and cell debris. 250 µl supernatant was removed into a new tube, to which 63 µl ExoQuick reagent was added. The tube was thoroughly mixed and incubated at room temperature for 30 min. This was followed by centrifugation at 1500×g for 30 min, after which the supernatant was discarded. This step was repeated for another 5 min, after which the supernatant was discarded again. Finally, the remaining pellet was deemed as the exosome fraction.

A 20 µl exosome aliquot suspension was placed onto a 200-mesh carbon coated copper grid for 2 min. After excess liquid was removed using filter paper, the grid was negatively stained with a 3% tungsten phosphate solution at room temperature for 3 min. The copper mesh was washed five times in double distilled water, and allowed to dry naturally at room temperature. The sample was observed and photographed under the transmission electron microscope (Thermo-Fischer, Waltham, MA, USA).

Clinical characteristic of the patients

Characterization of exosomes isolated from plasma

Diagnostic value of each marker for colorectal cancer

As a clinical challenge, the early diagnosis and metastasis monitoring of cancer has received much attention. In recent years, small extracellular vesicles have provided the potential to act as minimally invasive diagnostic tools for asymptomatic cancer patients. Exosomes isolated from the blood contain multiple proteins and nucleic acid moieties, of which miRNA has become topical in biomarker research, due to its therapeutic potential and stability [11-13]. miRNAs are protected from RNase activity thanks to several mechanisms: they are wrapped in membrane vesicles (microparticles, exosomes, and apoptotic bodies) and they are enclosed in lipoprotein complexes or associated with proteins [14-15]. Recent studies have demonstrated that exosomal miRNAs may act as novel biomarkers for cancer diagnosis, e.g. exosomal miRNA-21 and miRNA-1246 in CRC [16-18]. To date, this is the first study to examine the potential of plasma exosomal miRNA-139-3p in CRC diagnosis. 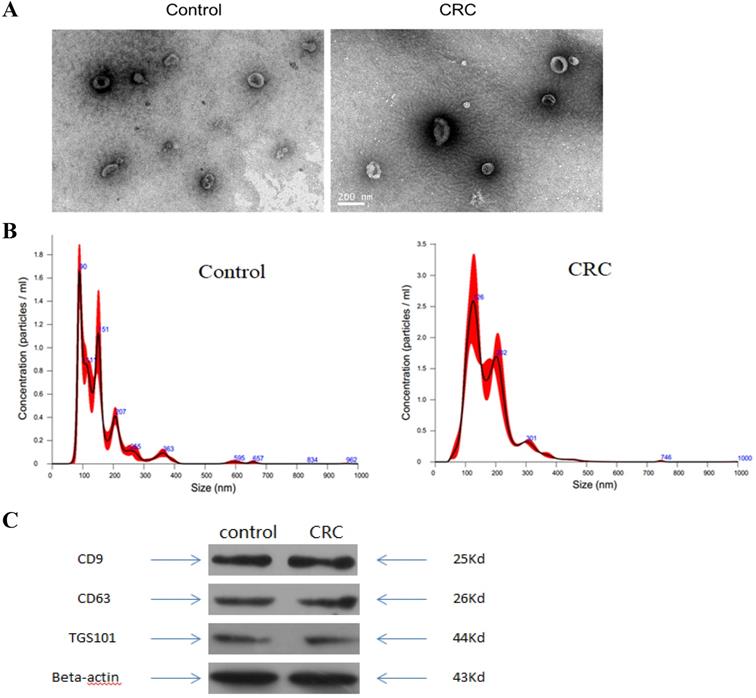 There were several limitations to this study. Firstly, there were no long-term clinical follow-up data for each CRC patient, thereby limiting the long term prognostic value of exosomal miR-139-3p. Secondly, due to the limited number of patients, the results must be confirmed with larger prospective studies in future. Thirdly, we did not explore the mechanism of exosomal miR-139-3p expression in CRC, however this is anticipated in future work. 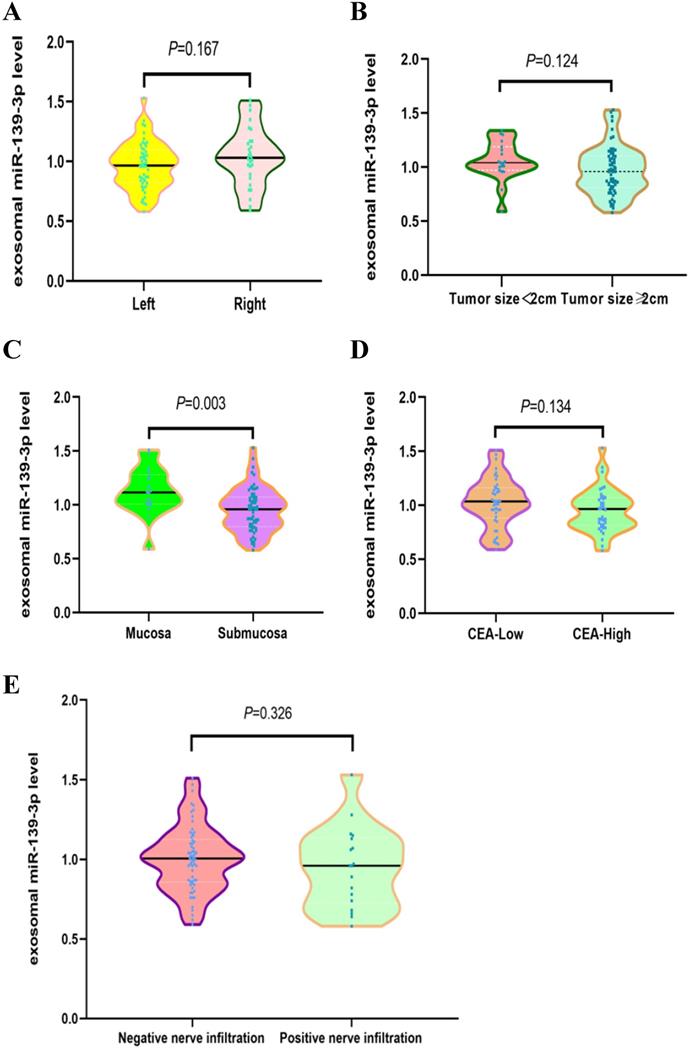 Plasma exosomal miR-139-3p was significantly down-regulated in CRC patients, and was associated with disease progression. Our study clearly indicated that exosomal miR-139-3p may be a promising blood-based biomarker for the early diagnosis and metastasis monitoring of CRC. As a non-invasive biomarker, this molecule has great potential as an auxiliary biomarker in the diagnosis of CRC.