Objectives: The association between prostate cancer (PC) and chronic periodontal disease (PD) has been evaluated in previous studies, but results have been inconsistent. This study aimed to determine whether the presence of chronic PD in old age increases the risk of PC using data in the large-scale elderly cohort.

Conclusion: Our results suggest that chronic PD is significantly and positively associated with PC. Larger and better-controlled studies are needed to strengthen this evidence of association and explain the underlying biological mechanisms.

Prostate cancer (PC) is one of the most common age-related malignancies in men worldwide and accounts for 20% of new male cancers in the United States in 2019 [1]. The rate of deaths from PC is decreasing annually but accounts for 9.8% of deaths from male cancer since 2018 and PC is still a common and significant cause of morbidity and mortality in elderly men [1,2]. In contrast, in 2016, PC was the fourth most common cancer in South Korea after stomach, lung, and colon cancers, with a total of 11,800 cases, accounting for 9.8% of all male cancers [3]. Especially, recently in South Korea, PC has increased incidence by a greater margin than any other male cancer [3].

Although PC is an extremely popular cancer in elderly men, various factors are intricately intertwined with each other, so the primary cause is still controversial [4,5]. Congenital factors, such as genetic abnormalities, are closely related to PC, but acquired environments, such as old age and obesity, are also considered important risk factors [6]. Additionally, chronic inflammation is also known to play a decisive role in the initiation, promotion, malignant conversion, invasion, and metastasis of cancer, and the evidence that chronic inflammation is the cause of PC has been reported by epidemiological or pathological studies [7-10].

Chronic periodontal disease (PD) is a representative and typical bacterial and inflammatory disease developing within the oral cavity that results in alveolar bone loss and subsequent loss of teeth for a relatively long period [11,12]. Several risk factors might be responsible for chronic PD, especially smoking, obesity, and diabetes mellitus, which are also major risk factors or risk indicators for chronic PC [13].

Recently, several studies have carefully reported that PC and chronic PD are closely related and correlated with underlying chronic inflammatory processes [14-16]. It is clear that the risk of PC and chronic PD increases with age, and it is considered that patients with chronic PD are more likely to develop PC, but studies are limited. Therefore, this study aimed to determine whether the presence of chronic PD in old age increases the risk of PC using the large-scale elderly cohort database in South Korea.

The study analyses used the National Health Insurance Service-Elderly Cohort (NHIS-EC) database in South Korea, which was established by the NHIS (NHIS sharing service, https://nhiss.nhis.or.kr) to assess the risk and prognostic factors of geriatric disease. In this database, 10% of elderly participants, who were selected from approximately 5.5 million of elderly individuals aged ≥ 60 years who are eligible for national health insurance and medical benefits, are included. Data from 2002 to 2015 (14 years), including sociodemographic information, records of medical history and health examination, and information on nursing institutions and long-term care services, were entered in a retrospective cohort form that does not contain personally identifiable or sensitive medical information.

This study conformed to the Strengthening the Reporting of Observational Studies in Epidemiology (STROBE) guidelines for reporting observational cohort studies (www.strobe-statement.org) and was approved by the Institutional Review Board of Daejeon Dental Hospital, Wonkwang University (approval no. W2003/001-001). The requirement for written informed consent was waived by the NHIS (REQ0000034029).

The chronic PD diagnosis was based on the K052-K056 codes of the Korean Classification of Disease 7th revision (KCD-7), corresponding to codes of the International Classification of Disease 10th revision (ICD-10), according to criteria of the Centers for Disease Control and Prevention/American Academy of Periodontology [17,18]. During the oral health examination, chronic PD was assessed and scored based on measurements of clinical periodontal parameters, including bleeding on probing, probing depth, clinical attachment level, and periodontal tooth loss [19]. Moreover, to confirm chronic PD, the participants were limited to those diagnosed with chronic PD at least twice during the oral health examination between 2002 and 2005. The primary endpoint was the newly diagnosed PC in 10 years from 2006 to 2015, which was defined using the KCD-7 code C61, corresponding to ICD-10 code C61, by medical oncologists or urologists. 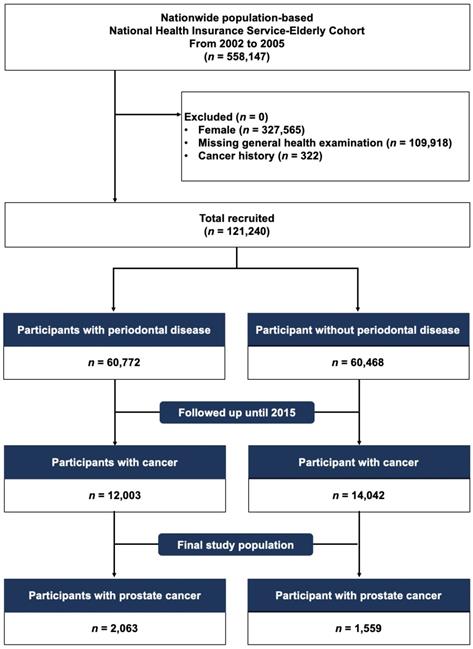 bDivided into five quintiles based on the insurance fee imposed on each household, with the MAP group classified into the first quintile.

Table 1 shows the baseline characteristics of the study population according to the presence and absence of chronic PD. Participants with chronic PD were more likely to have comorbidities, such as hypertension (66.9%), diabetes mellitus (37.5%), angina pectoris (4.2%), myocardial infarction (20.3%), and prostatitis (11.8%), and less likely to smoke (29.5%) and perform regular physical activity (53.4%) compared with those without chronic PD.

Association of PD with incidence of PC

In this study, the proportion of PCs among cancers in elderly men was 13.9%, which is similar to that in the World Health Organization GLOBOCAN database that reported 15% of PCs among all male cancers, and these results are also highly consistent with the increase in PC incidence and prevalence at older ages.[6] Our study, which was conducted on 121,240 men aged ≥ 60 years, showed that the incidence of PC with chronic PD in 10 years was 3.0%, and adjusted HR for developing a new PC was 1.24 (95% CI 1.16-1.32, P < 0.001) [15].

Despite the growing interest in oral health and improvement of oral hygiene and dental services, the incidence and prevalence of chronic PD have been consistently increasing as society ages [20]. In 2018, PD was the second most common disease in the outpatient hospital care in South Korea, and about 30.1% (15.6 million individuals) of its current population has already received treatment. Previously, chronic PD was defined as a localized and chronic inflammatory response caused by specific anaerobic bacteria in the periodontal pocket, such as Porphyromonas gingivalis, Tannerella forsythia, Treponema denticola, and Aggregatibacter actinomycetemcomitans. However, recently, clinical and pathological evidence that chronic PD is closely related to chronic and progressive systemic inflammatory diseases, including cardiovascular disease, diabetes mellitus, rheumatoid arthritis, and osteoporosis, has steadily emerged [21-23]. 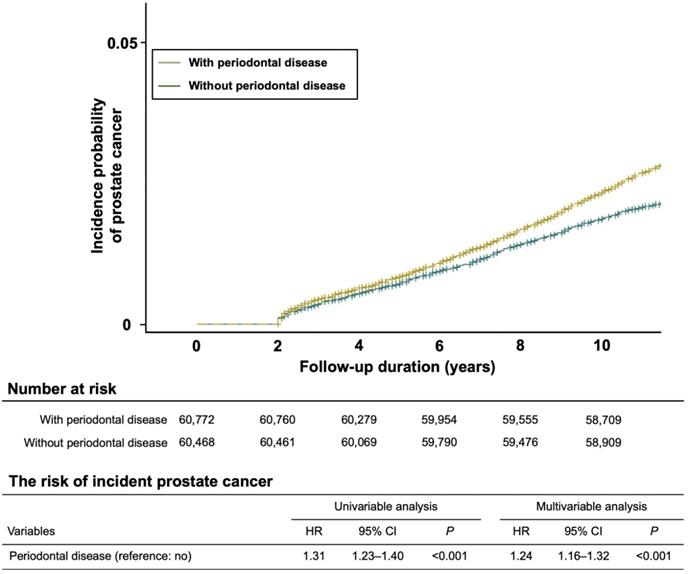 Dysbiosis of the oral microbiota, bacteria-induced immune evasion and dysregulation, modulation of various signaling pathways, and subsequent inhibition of apoptosis and activation of cell proliferation in patients with chronic PD have all been proposed as pro-tumorigenic mechanisms [29-31]. Moreover, some genes (particularly CDKN2B) that are significantly and consistently related with cancer are also associated with PD, which suggests shared genetic susceptibility between the two diseases [28].

Activated inflammatory cells, including neutrophils, macrophages, and dendritic cells, secrete pro-inflammatory and pro-growth substances, such as tumor necrosis factor (TNF)-α, cytokines, chemokines, matrix metalloproteases, and pro-angiogenic molecules. These cells also produce reactive oxygen and nitrogen species, which can induce DNA damage in epithelial cells and produce an environment for both initiation and promotion of carcinogenesis at local and distant sites [32-34]. Periodontal pathogens might promote cancer development through invasion of blood vessels, bacteremia, and subclinical infection in distant sites [28].

Among the comorbidities investigated in this study, prostatitis was found to have the closest relationship with PC (crude HR 2.07, 95% CI 1.91-2.25, P < 0.001; adjusted HR 1.92, 95% CI 1.77-2.08, P < 0.001). Patients with moderate-to-severe prostatitis and chronic PD were found to have higher prostate-specific antigen levels, which are used to track response to androgen deprivation therapy (ADT) for PC [35]. Famili et al. found that men with PC undergoing ADT were more likely to have PD than men not undergoing ADT [36]. Both PD and prostatitis result in cytokine imbalance toward increased pro-inflammatory cytokines, such as interleukine (IL)-6, IL-8, IL-18, TNF-α, and C-reactive protein, and decreased anti-inflammatory cytokines [37]. Additionally, major clinical parameters of PD, especially clinical attachment level, were significantly worse in patients with moderate-to-severe prostatitis [35,37]. Considering the similarity in the etiopathogenesis of prostatitis and PD, it is possible that there is a pathological link between them; however, further studies are necessary to draw a conclusion.

The present study has several limitations. First, since all patients with cancer are required to register in the National Cancer Registration and Statistics system, the diagnostic accuracy of PC is highly reliable, while it is difficult to guarantee the diagnostic accuracy of chronic PD due to the nature of this study. Therefore, to increase the diagnostic reliability of chronic PD, diagnosis should be made twice using clinical parameters of the oral health examination, and all participants who did not undergo oral health examination were excluded. Second, because the current NHIS-EC database does not provide information on the stage and grade of PC, it is difficult to confirm the association between the progression or severity of PC and chronic PD. Third, due to the study design, it is hard to distinguish whether PD and PC have a causative relationship or they share the same susceptibility. Finally, since this study has been analyzed retrospectively only for those who have undergone general and oral health examinations, selection bias could occur fundamentally.

Despite the abovementioned limitations, this is the first study that used NHIS-based elderly cohort data from South Korea, and the results demonstrated a positive and significant association between PC and chronic PD. The retrospective nature of this study limits the conclusiveness of our findings. Therefore, large better controlled studies are warranted to strengthen this evidence of association and help elucidate the underlying biological mechanisms.

The used NHIS-HEALS data (NHIS-2020-2-082) were supplied by the NHIS. The authors declare that they have no potential conflicts of interest with the NHIS or financial disclosures to report. This work was supported by a National Research Foundation of Korea (NRF) grant funded by the Korean government (MSIT) (No. 2019R1A2C1083978) and Wonkwang University in 2020.