Background: Dual-phenotype hepatocellular carcinoma (DPHCC) is associated with high rate of post-operative recurrence and low rate of survival, which may reflect the post-operative persistence of cancer stem cells (CSCs). Here we explored the potential correlation between DPHCC and expression of CSCs markers.

Methods: In this retrospective study, we included 19 patients with DPHCC and 61 patients with non-DPHCC treated in 2015 by liver resection. Paraffin-embedded tumor tissue specimens were analyzed using immunohistochemistry as well as immunofluorescence double-staining. Rates of recurrence-free survival and overall survival were compared between the two groups using the Kaplan-Meier method, and expression of the CSC markers CD133, CD90, and EpCAM were compared using real-time quantitative PCR and western blotting.

Conclusions: These results suggest that DPHCC is associated with significantly lower overall survival than non-DPHCC, and that the poor prognosis among DPHCC patients may be related to the presence of CSCs expressing CD133 and EpCAM.

Hepatocellular carcinoma (HCC) is one of the most common malignancies in the world and is the third most frequent cause of cancer mortality1. Surgical resection is the most effective way to treat HCC2,3. However, the 5-year recurrence rate is up to 70% after hepatectomy, indicating the need for further work to understand this cancer better 4. HCC occurs as various pathological subtypes, which may differ in prognosis5,6. Dual-phenotype HCC (DPHCC) is a newly described HCC subtype characterized by the expression of biomarkers for HCC and intrahepatic cholangiocarcinoma. DPHCC accounts for approximately 10% of all cases of HCC7, and it shows greater malignancy and invasiveness than non- DPHCC subtypes8. The mechanisms behind DPHCC onset are poorly understood.

Positive expression of cytokeratin 19 (CK19) is one of the typical characteristics of DPHCC. CK19 is believed to be a a marker of cancer stem cells (CSCs)9,10, which show strong proliferation and self-renewal in tumor tissues and can differentiate along several pathways. Moreover, CSCs appear to contribute greatly to tumor formation, development and maintenance11. CSCs have been identified in liver cancer tissues and cell lines12-14, raising the question of how such cells contribute to initial HCC and recurrence. The particularly poor prognosis associated with DPHCC may indicate that, even after resection, sufficient CSCs remain to cause recurrence.

This study compared the prognosis of patients with DPHCC or non-DPHCC after curative hepatectomy. We also examined whether expression of CSCs markers correlated with poor prognosis of DPHCC patients.

The study protocol was approved by the Research Ethics Review Board of the Guangxi Medical University Cancer Hospital. Prior to hepatic resection, all patients gave written informed consent for their anonymized data to be analyzed and published for research purposes.

This retrospective study analyzed medical records of patients with HCC, all of whom underwent curative hepatic resection as initial treatment at the Guangxi Medical University Cancer Hospital between January 2015 and November 2015. Tumor stage was determined according to the guidelines of the American Association for the Study of Liver Diseases(AASLD)15. Patients were included if they met the following criteria: (1) HCC was diagnosed by standardized pathological parameters; (2) Child-Pugh functional liver status was A or B; and (3) initial treatment was curative resection, which was defined as removal of all tumor lesions based on macroscopic inspection and negative histology resection margin, absence of residual tumor or portal tumor thromboses in postoperative imaging, and decrease of alpha-fetoprotein levels to normal within 2 months after surgery. Patients were excluded if they had any other malignancies, distant metastasis, lymph node involvement, or macrovascular invasion. They were also excluded if no paraffin-embedded tissues from them had been archived. A total of 80 patients met the inclusion criteria.

Either paraffin-embedded or frozen tissues were available for 47 of these 80 patients (13 with DPHCC, 34 with non-DPHCC) for western blotting and PCR analyses as described below. The specimens had been archived in the Biobank of the Guangxi Medical University Cancer Hospital.

All patients were followed up at 1 month after surgery, then every 3 months for the rest of the first year, and every 6 months thereafter. Follow-up visits included physical examination, liver function tests, serum alpha-fetoprotein measurement, abdominal ultrasonography and computed tomography or magnetic resonance imaging. Recurrence-free survival and overall survival were calculated as the time from the date of surgery until detection of recurrent tumors or until the date of the last follow-up. Follow-up was conducted until April 2019.

During the study period, 298 patients underwent curative liver resection for HCC. However, 218 patients (73.2%) were excluded because CK19 expression in histopathology sections was unknown or no paraffin tissue specimens were available (n = 152, 51.0%); because other procedures, such as local ablation therapy, ethanol injection or transarterial chemoembolization, had been applied prior to liver resection (n = 12, 4.0%); or because patients were lost to follow-up (n = 54, 18.1%). In the end, 80 patients were included in the study.

Clinicopathological characteristics of the included patients are summarized in Table 2. Although there were three times as many patients in the non-DPHCC group as in the DPHCC group (61 vs. 19), the two groups showed no significant differences in sociodemographic or clinical parameters.

aValues are n, unless otherwise indicated.

Expression of cancer stem cell markers. (A) Immunofluorescence double-staining of hepatic tumor tissues from patients with DPHCC or non-DPHCC for the cholangiocytic marker CK19 (red) and hepatocyte marker Hep Par-1 (green). Patients with non-DPHCC were subdivided into those negative or positive for CK19 expression. The cells in the white dotted box are dual-phenotype cells. (B) Immunohistochemical staining of DPHCC tumor tissue for Hep Par 1 and CK19 from patients with HCC. Panels a and c are consecutive slices shown at ×40 magnification, while b and d are zoomed-in views (×200 magnification) of the boxed areas. Cells indicated by red arrows fulfill the DPHCC diagnostic criteria. The cells indicated by the red arrow are dual-phenotype cells. (C) Western blot showing protein levels of CD90, CD133 and EpCAM. (D) Relative levels of mRNAs encoding CD133, EpCAM and CD90 (THY1) as detected by real-time quantitative PCR. Relative expression of mRNA was determined using the log (fold change). Positive values (relative expression of mRNA > 0) were taken to indicate up-regulation. 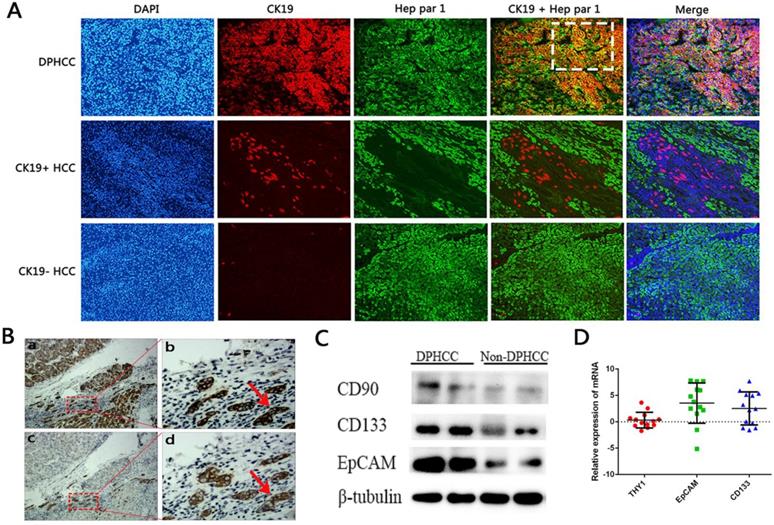 Uni- and multivariate analysis to identify predictors of poor recurrence-free survival and overall survival in HCC patients after hepatectomy (n=80).

The World Health Organization recognizes three types of primary liver cancer: HCC, intrahepatic cholangiocarcinoma, and a combination of hepatocellular carcinoma and cholangiocarcinoma16. Few studies have been performed on the combination form, DPHCC, and this research gap is important to address because of the relatively high recurrence rate associated with this subtype.

Our study confirms work by others showing that positive expression of CK19, considered a CSCs marker in HCC17, 18, is an independent risk factor for decreased overall survival in HCC patients following curative resection19-22. We further showed here that CK19 can predict poor recurrence-free survival after resection. DPHCC exhibits high invasiveness, which might be closely correlated with the expression of CK19, which mediates transforming growth factor beta (TGFβ)/Smad signaling23.

Patients with DPHCC in our cohort showed a lower rate of overall survival than those with non-DPHCC, which is consistent with previous studies7, 8 and which confirms that DPHCC is a more malignant HCC subtype, even after curative resection. Our study showed that CA19-9 levels > 37 ng/ml are predictors of overall survival in patients with HCC after resection. CA19-9 levels effectively predicted postoperative survival of intrahepatic cholangiocarcinoma patients expressing high levels of CK1924. Serum CA19-9 is also a marker of poor prognosis in pancreatic cancer and colorectal carcinoma25-27.

Although the difference in recurrence-free survival between DPHCC patients and non-DPHCC patients was not statistically significant, survival tended to be lower in patients with DPHCC (P=0.058). Multiple tumor nodules were an independent risk factor for recurrence-free survival in HCC patients, probably owing to the high incidence of microvascular invasion and intrahepatic metastasis in these patients28,29. Multiple nodules are often accompanied by microsatellite tumors that are invisible to the naked eye; they cannot be accurately removed during surgery, which affects the tumor recurrence rate in HCC patients after hepatectomy.

We found significantly higher levels of EPCAM and CD133 mRNA and protein in DPHCC tissues than in non-DPHCC tissues. Our results are consistent with reports that HCC patients positive for EpCAM or CD133 have poor prognosis, and that EPCAM and CD133 act synergistically in tumors30-32. EPCAM participates in a Wnt signaling pathway of tumorigenesis33,34, while CD133+ cancer cells up-regulate interleukin-8 (IL-8) and activate MAP kinase signaling pathways35, 36. One study showed that IL-8 promoted β-catenin phosphorylation in cancer cells and acted via the Wnt/β-catenin pathway to induce the epithelial-to-mesenchymal transition and migration37. Therefore we suspect that EPCAM and CD133 act via Wnt-related pathways to influence HCC, and further research should explore how.

Expression of a third CSCs marker, CD90, was similar between DPHCC and non-DPHCC tissues in our study. CD90 may be involved in HCC only under certain conditions. Although CD90 is a typical marker of CSCs in HCC and high CD90 expression has been linked to higher recurrence rate38, 39, one study reported that CD90+ CSCs-like cells in the liver may participate only in late-stage liver cancer associated with hepatitis B virus infection40.

The results of the present study should be interpreted with caution in light of several limitations, such as lack of long-term overall survival data, small sample and short follow-up. Despite these limitations, our data justify further work exploring the use of immunofluorescence double-staining as a reliable method for diagnosing DPHCC. Our data also suggest a link between high expression of two CSCs markers (EpCAM, CD133) and poor prognosis in DPHCC.