Introduction: The prognosis of adolescent and young adult (AYA) patients with colorectal cancer (CRC) is still unclear. The aim of this study was to investigate the clinical features and prognosis in AYA patients compared with middle- aged patients.

Results: A total of 502 patients were enrolled as the AYA group, and 7222 patients between 65 and 74 years of age were identified as the middle-aged group. The OS of colon cancer in stages II and III was significantly better in the AYA group (p = 0.033, 0.006, respectively) than in the middle-aged groups. There were no significant differences in the OS of rectal cancer in stages II and III between the two groups.

Conclusion: The prognosis of AYA patients with CRC was the same or better than that in middle-aged patients.

Several previous reports have suggested that a younger age is an independent predictor of a poor prognosis among patients with colorectal cancer (CRC) [1-4]. Generally speaking, few patients <50 years of age undergo periodic screening examinations, such as colonoscopy or fecal occult blood test, and are thus often diagnosed with advanced stage CRC with a severe symptomatic condition (e.g. obstructive colitis, anemia or bleeding) [5]. In addition, regarding the clinicopathological characteristics of CRC in adolescent and young adult (AYA) patients, previous reports have shown that the incidence is particularly common in men and in the left-side colon, frequently with a histologically poorly differentiated type. These findings are unfavorable for the oncological prognosis [5-7]. However, whether or not a young age is an independent risk factor for a poor prognosis remains controversial.

We focused on AYA patients with CRC in the present study to answer the clinical question of whether or not a standard therapeutic strategy could be applied in relatively young patients. Reflecting the rapid graying of society, the mean age of patients with CRC has been increasing in recent years. Although AYA patients might be disadvantaged to some degree oncologically, they retain some advantages with regard to treatment, as there are generally fewer comorbidities and patients have a higher tolerability for surgery or other aggressive multidisciplinary approaches than older patients. If younger patients truly have a poorer prognosis than older ones, they will require a more aggressive treatment strategy than the standard therapy according to clinical guidelines. The impact of a young age on the prognosis of CRC is therefore a relevant issue meriting investigation.

In the present study, we compared the survival outcomes of AYA patients with CRC with those of middle-age patients after adjusting for the TNM stage and other confounding factors. Our hypothesis was that the age was not an independent risk for the survival of patients with CRC, and we verified this theory using a multi-center large-scale database. Through this study, we hope to provide relevant information that can aid physicians in selecting suitable treatment strategies.

We identified AYA and middle-aged patients from the database established by the Japanese Study Group for Postoperative Follow-up of Colorectal Cancer (JFUP-CRC), consisting of 23 hospitals that are mainly university hospitals and cancer-specialized hospitals throughout Japan. During the 12-year period from 1997 to 2008, consecutive patients who underwent radical resection for CRC were isolated from this database. The inclusion criteria of this study were as follows: patients who underwent radical surgery with lymph node dissection for CRC, had histologically proven adenocarcinoma and were diagnosed with pathological stage 0 to III disease. Patients who have missing data on their diagnostic age and follow-up findings were excluded from the analyses.

The AYA group was defined as those <40 years of age, which is a cut-off commonly used in studies related to AYA patients with cancer [8-10]. Furthermore, the middle-aged group was defined as those with a median age of around 10 years. This study was approved by the institutional review boards or ethics committee at each hospital. The cancer staging was based on the seventh Union for International Cancer Control (UICC) TNM classification.

The primary outcome was the overall survival (OS), and the secondary outcomes were the recurrence-free survival (RFS), tumor characteristics, implementation of adjuvant chemotherapy, and patterns of recurrence. The survival time was evaluated by the stage-stratified analyses between the AYA and middle-aged group using the Kaplan-Meier method and Log-rank test. The hazard ratios (HRs) and 95% confidence intervals (CIs) were estimated using the Cox proportional hazards model as primary analyses. The descriptive statistics were evaluated in other secondary outcomes, and as necessary, continuous variables were compared using Student's t-test and categorical variables using Fisher's exact test. All statistical tests were two-sided, and P values of ≤0.05 were considered to indicate statistical significance. All analyses were performed with STATA version 14 (Texas, USA).

Table 1 shows the characteristics of the two groups. The median age in the AYA group is 35 (range 17-39) years. As patients with lymph node metastasis were more frequent in the AYA group, the proportion of stage III is significantly higher in the AYA group than in the middle-age group (42.8 vs. 36.2%, p<0.001).

Figure 1 shows the comparison of the survival curves between the AYA and middle-aged groups in colon and rectal cancer.

The proportion of patients who underwent adjuvant therapy

Table 2 shows the number of patients who underwent adjuvant therapy in stages II and III. Among both colon and rectal cancer patients with stage III disease, the proportions receiving adjuvant therapy were higher in the AYA group than in the middle-aged group.

Table 3 shows the patterns of recurrence during the follow-up period. There were no significant differences between the groups. 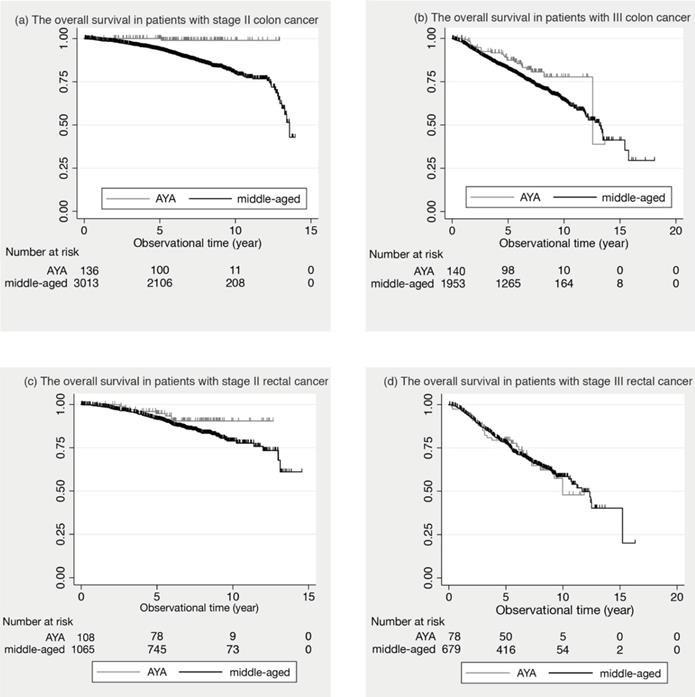 In the present study, we demonstrated that a young age is not an independent risk for the long-term outcomes in CRC patients. In terms of oncological outcomes stratified pathological stage, the AYA group had a better OS of colon cancer than the middle-aged group, while the survival results for rectal cancer were equivalent between the two groups. In addition, we found that several clinical features—namely the incidence of rectal cancer, histologically poorly differentiated type and lymph node metastasis—were more frequent in AYA patients than in middle-aged patients.

Previous reports have suggested that a screening effect in middle-aged patients confers upon them a better prognosis than that of younger patients, as CRC tends to be found at an earlier stage in middle-aged patients than in younger ones [5-7]. We therefore adjusted for the TNM stage and tumor location to ensure a proper comparison between the two groups. As a result, our findings implied that the AYA group had the same or a better prognosis than the older patients.

Based on the present results, we considered that a young age was not an independent risk factor for the long-term prognosis in CRC patients. However, we must bear in mind two important points when treating AYA patients: the increased incidence of lymph node metastasis and the greater proportion receiving adjuvant chemotherapy in the AYA group than in the middle-aged group. As poorly differentiated adenocarcinoma is more common in AYA patients than in older ones, the proportion with positive lymph nodes was higher in this group than in the middle-aged group. A similar situation has also been reported in young patients with gastric cancer [11]. Thus, during radical resection, more rigorous lymph node dissection might be needed for young population.

In addition, possible recurrence should be considered during the postoperative follow-up. However, as young patients tend to have a relatively low incidence of comorbidities or postoperative complications, they are able to tolerate adjuvant therapy well. Indeed, a higher proportion of AYA patients than middle-aged patients received adjuvant therapy in our study (57.6% vs. 42.4%). Consequently, the prognosis of colon cancer was superior in the AYA group to that in the middle-aged group. However, of note: the OS and RFS of rectal cancer were almost the same in both groups despite more AYA patients receiving adjuvant chemotherapy than middle-aged patients. To improve the oncological outcome in AYA patients with rectal cancer, we should perform R0 resection with sufficient lymphadenectomy and increase the proportion of adjuvant treatment according to the guideline [12,13]. In addition, a more aggressive regimen and concurrent radiotherapy might be required for high-risk patients. To answer our clinical question as to whether or not a standard therapeutic strategy could be applied for relatively young patients, adjuvant chemotherapy should be performed rigorously for stage III AYA patients, and a more aggressive regimen such as oxaliplatin-based chemotherapy might be considered for high risk stage II AYA patients [14].

A major limitation associated with the present study warrants mention. The lack of any data on a history of familial cancer, such as Lynch syndrome, which is known to be a good prognosis factor, is a weakness of this study. However, Myers et al. reported that CRC was common in young patients with no family history, as only 12% of patients in their cohort had a first-degree relative with CRC; this therefore likely had a limited influence on our results [5]. Despite this limitation, our study had a larger sample size than previous reports, so we were able to answer our clinical question. Additionally, as the observational period was 10 years previously, the impact of new strategies for CRC, such as oxaliplatin-based adjuvant chemotherapy, molecular targeting therapy, radical hepatectomy and lung resection were not reflected in this study.

We conclude that a young age is not an independent risk factor for the prognosis in patients with CRC.

This cohort project was conducted by the Japanese Study Group for Postoperative Follow-up of Colorectal Cancer in collaboration with 23 leading hospitals for cancer care across Japan, 15 university hospitals and 8 medical centers, and was approved by the Central Institutional Review Board (Tokyo Medical and Dental University). The study protocol was approved by the local ethical committee. All patients provided informed consent.

The datasets used and analyzed during the current study are available from the corresponding author on reasonable request.

10. Gondos A, Hiripi E, Holleczek B, Luttmann S, Eberle A, Brenner H. et al. Survival among adolescents and young adults with cancer in Germany and the United States: an international comparison. International journal of cancer. 2013;133:2207-15