Bladder cancer (BC) is one of the ten most common tumors in the whole body and the most common malignant tumors in urinary system [1]. In the West, the incidence of BC is second only to prostate cancer in urogenital tumors, while it occupies the first place in China [1-3]. Bladder urothelial carcinoma is the most common pathological type of BC, accounting for more than 90% of the total number of BC patients.

Chemotherapy is one of the most effective means to treat BC at present, which reduced significantly the risk of recurrence and metastasis, and improve evidently the prognosis of BC patients [4]. Nevertheless, the resistance of cancer cells to chemotherapy drugs often leads to chemotherapy failure.

Recently, circular RNA (circRNA) is a hotspot in the field of life science research, it is a special kind of non-coding RNA molecule. Because the closed ring structure is not affected by RNA exonuclease, circRNAs are more stable and difficult to degrade. CircRNA molecules are rich in microRNA binding sites and act as competitive endogenous RNA (ceRNA) to play the role of microRNA sponge in cells [5,6]. By interacting with tumor-associated microRNAs, circRNAs play important regulatory roles in tumorigenesis [7-10].

CircHIPK3 was low-expressed in BC, up-regulation of circHIPK3 suppressed the angiogenesis, invasion, and migration of BC cells, and inhibited the growth and metastasis of BC in vivo [19]. In our preliminary experiment, circRNA microarray screening found that circHIPK3 was also down-regulated in BC tissues, which suggested circHIPK3 might be involved in the genesis of BC. Nevertheless, it is not clear whether circHIPK3 is involved in the formation of chemotherapy resistance in BC and its role in chemotherapy resistance.

68 BC tissue and corresponding normal bladder urothelial tissue (NBUT) specimens were obtained Shengjing Hospital from August 2012 to April 2014. All tissue specimens were collected through cystoscopy and confirmed by pathological diagnosis. All patients received no chemotherapy, radiotherapy or other antineoplastic treatment before diagnosis. The inclusion criteria of patients was that all patients were diagnosed as BC, and they needed neoadjuvant chemotherapy with gemcitabine before operation or they chose gemcitabine chemotherapy if they could not be treated surgically. The exclusion criteria was the BC patient did not treat with gemcitabine chemotherapy.

The expression plasmid and negative control plasmid of circHIPK3 (pCD5-circHIPK3 and pCD5-NC) were constructed by GENESEED Company (Guangzhou, Guangdong, China). Lipofectamine™ 3000 (Thermo Fisher Scientific, USA) was applied to transfect plasmids into cells according to manufacturer's instructions.

Cell Counting Kit-8 (MedChemExpress, Monmouth Junction, NJ, USA) was used to examine cell viability. 5×103 cells were suspended with 100 µl culture medium and seed in a well of a 96-well plate; 10 μl CCK-8 solution was added to each well of the plate; the plate was incubated 1 h in the incubator and mix gently on an orbital shaker for 1min. The absorbance at 450 nm was measured using a microplate reader.

5×103 cells were suspended with 100 µl culture medium and seed in a well of a 96-well plate; new culture medium with gemcitabine (0.1 μg/ml, 0.5 μg/ml, 1 μg/ml, 5 μg/ml and 10 μg/ml respectively) (Sigma-Aldrich, St. Louis, MO, USA) was added to replace old culture medium 6 h later; after 24 h, cell viability was examined and the half maximal inhibitory concentration (IC50) was calculated according to our previous studies [20,21].

All data was analyzed using Graphpad prism 5 (GraphPad Software, San Diego, CA, USA). All BC patients were divided into two groups (high-expression and low-expression) according to the median value of relative circHIPK3 expression. The difference comparison was analyzed by one-way ANOVA, Student's t-test and Chi-square test. The survival rate was calculated with Kaplan-Meier method with the log-rank test for comparisons. Variables with a value of P<0.05 in the univariate analysis were included in the subsequent multivariate analysis based on the Cox proportional hazards model. A P value of less than 0.05 was considered to be statistically significant.

The expression of circHIPK3 was down-regulated in BC

Firstly, the circRNAs which differentially expressed between BC and NBUT were screened using circRNA microarray assay, screening results suggest that the expression of circHIPK3 had a prominent down-regulation in BC compared with NBUT (Figure 1A). Secondly, real-time quantitative PCR confirmed circHIPK3 was significantly low-expressed in BC in comparison to NBUT (Figure 1B, P<0.05). Thirdly, the circHIPK3 expression in T24, J82 and UMUC3 cells was much lower than that in CCC-HB-2 and SV-HUC-1 cells (Figure 1C, P<0.05).

As shown in Table 1, the circHIPK3 expression had a negative correlation with high pathological grade, lymph node metastasis and gemcitabine chemotherapy insensitivity of BC patients (P<0.05), but was not correlated with age, gender, smoking history and muscular invasion of BC patients (P>0.05). 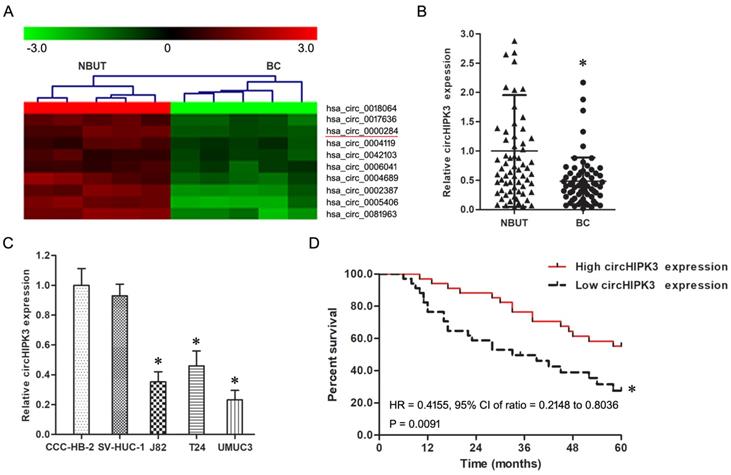 circHIPK3 was an independent prognostic biomarker for BC patients

Low-expression of circHIPK3 correlated to gemcitabine resistance in BC

The results showed the circHIPK3 expression in T24/gem and J82/gem cell lines was significantly down-regulated as compared to their parental cells in vitro (Figure 2, P<0.05). This data suggested that low-expression of circHIPK3 correlated to gemcitabine resistance in BC. 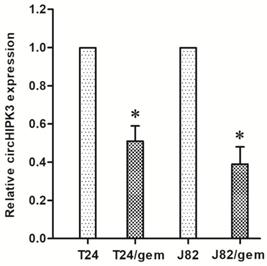 Increasing researches found some circRNAs was involved in the genesis and progress of BC. For instance, circMTO1 was down-regulated in BC, its expression level was negatively correlated with metastasis and poorer survival of BC patients [22]. Lu Q et al. reported that circSLC8A1 was low-expressed in BC, circSLC8A1 up-regulation suppressed proliferation, migration and invasion of BC cells [23]. Circ-0000285 was down-regulated significantly in BC tissues and serum, its expression as was associated with TNM stage, differentiation, tumor size, lymph node metastasis and distant metastasis, and the circ-0000285 expression was lower in cisplatin-resistant BC patients than in those who were cisplatin-sensitive, which suggested that circ-0000285 was an independent prognostic factor for the outcome of BC patient [24]. 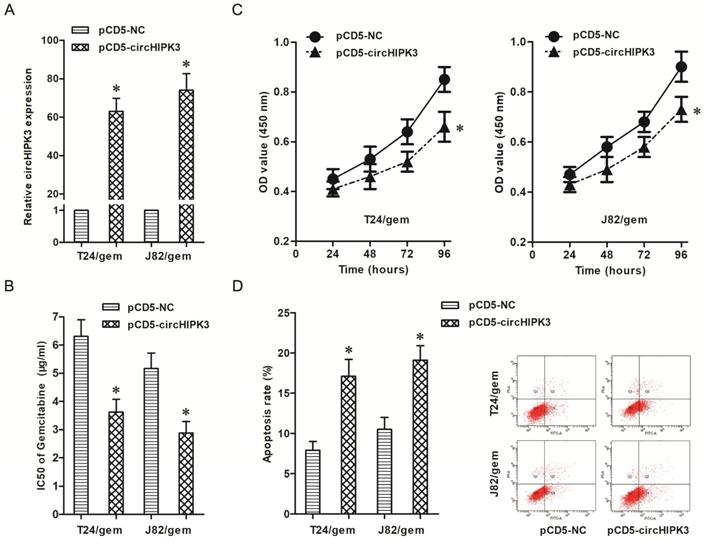 Firstly, real-time quantitative PCR and microarray assays found circHIPK3 was low-expressed in BC tissues and cell lines, and its expression was negatively related with pathological grade and lymph node metastasis of BC. Moreover, circHIPK3 was a independent prognostic biomarker for BC patients, patients with lower circHIPK3 expression showed a significantly worse prognosis. Thus, circHIPK3 played important roles in the genesis and progress of BC.

Li Y et al. reported circHIPK3 was low-expressed in BC, and negatively correlated with grades, invasion and lymph node metastasis of BC patients, which was consistent with our findings and further demonstrated the roles of circHIPK3 in the genesis and progression of BC [22]. However, circHIPK3 was found to be highly expressed in glioma and elevated level of circHIPK3 was linked to poor prognosis [25]. This suggested that our circHIPK3 played different roles in different malignant tumors.

It is well known that some circRNA molecules are rich in microRNA binding sites and can act as ceRNAs to adsorb microRNAs. For example, circAKT3 could up-regulate PIK3R1 through adsorbing miR-198, and then enhance cisplatin resistance in gastric cancer [26]; circPAN3 sponge miR-153-5p/miR-183-5p to mediate the doxorubicin chemoresistance in acute myeloid leukemia [27]. Recently, three literatures reported circHIPK3 could sponge miR-124 in lung cancer, gallbladder cancer and hepatocellular carcinoma [28-30]. In addition, miR-124 regulated the gemcitabine resistance in pancreatic cancer and enhanced gemcitabine-induced cell apoptosis [31]. These findings give us a nice enlightenment, accordingly, we hypothesize circHIPK3 act as ceRNA to sponges some microRNAs and then regulate their target genes, and this mechanism is involved in genesis of chemotherapy resistance in BC.

In conclusion, the circHIPK3 is low-expressed in BC and is an independent prognostic biomarker for BC patients. The low-expression of circHIPK3 is related with the gemcitabine insensitivity of BC patients, over-expression of circHIPK3 promotes gemcitabine sensitivity in BC. Our study helps to expound the mechanism of chemotherapy resistance in BC, and future study may provide a novel therapeutic target for BC. However, whether our hypothesis is correct or whether there are other possible regulatory mechanisms has not been studied in this study, which needs to be further explored.

FX, NZ and DX carried out the experiments and performed the statistical analysis. HZ and DX participated in the study design and drafted the manuscript. All authors read and approved the final manuscript.

This study were approved by the Medical Ethics Committee of Shengjing Hospital, and all patients were informed and signed informed consent.