A Study of the S-1 or Capecitabine as First-line Regimen in Patients with Metastatic Colorectal Cancer: A Real World Study

This is an open access article distributed under the terms of the Creative Commons Attribution License (https://creativecommons.org/licenses/by/4.0/). See http://ivyspring.com/terms for full terms and conditions.
Citation:
Guo Y, Zheng T, Zhang C, Zhang Y. A Study of the S-1 or Capecitabine as First-line Regimen in Patients with Metastatic Colorectal Cancer: A Real World Study. J Cancer 2020; 11(7):1839-1845. doi:10.7150/jca.36929. Available from https://www.jcancer.org/v11p1839.htm

Objectives: To compare the 2-year overall survival (OS) rate and safety between patients using S-1 and capecitabine in the first-treatment of metastatic colorectal cancer in the real clinical setting.

Methods: In this retrospective cohort study, patients satisfying the following criteria were identified from 10 centers in China. The 2-year OS rate and safety were assessed. The propensity score matching (PSM) was used to control basic characteristics of the two groups to balance the processing bias and confoundings.

Results: A total of 1367 patients were identified, 824 patients accepted capecitabine and 546 patients accepted S-1. After PSM, 533 eligible patients were included in each group without statistical significance in age, sex, BMI, KPS score and comorbidities. The 2-year OS rate between two groups was without significant statistical difference (61.9% vs. 62.9%, p=0.4295). The subgroup analysis showed that the 2-year OS rate had no significant difference between men and women, younger and older than 60 years old, different metastatic sites, different chemotherapy courses between S-1 and capecitabine groups. The hematological adverse events were all without statistical difference between two groups, but the incidence of diarrhea (16.4% vs. 23.6%, p=0.0018) and hand-foot syndrome (28.7% vs. 46.7%, p<0.001) in S-1 group were lower than those in the capecitabine group.

Conclusions: Compared to capecitabine, S-1 had a similar 2-year OS rate but had a lower incidence of adverse events in the real clinical setting. So, S-1 could be a good choice in the first-treatment of patients with metastatic colorectal cancer in China.

Colorectal cancer, as one of the most common types of malignant tumors, is often asymptomatic in early stage and up to 25% of patients have already developed metastatic colorectal cancer (mCRC) at the first diagnosis [1]. Double combination chemotherapy plus targeted agents remain as the mainstay treatment for mCRC, and oxaliplatin plus infusional fluorouracil and leucovorin (FOLFOX) has been considered the standard regimen [2-3]. In response to the need for new therapeutic options offering improved efficacy, tolerability and convenience for patients instead of intravenous 5-fluorouracil, the new oral fluoropyrimidines have been developed. The oral fluoropyrimidine capecitabine has been demonstrated that as first-line therapy for mCRC to be non-inferior to 5-Fu, which achieves significantly superior response rates, equivalent time to disease progression and equivalent survival [4-5]. However,reported rates of hand-foots syndrome (HFS) are higher with capecitabine [6]. S-1, is an oral fluoropyrimidine that is composed of tegafur with two modulators of 5-Fu metabolism, 5-chloro-2,4-dihydrogenase (CDHP), and oteracil potassium. Oteracil potassium decreases incorporation of 5-fluorouridine triphosphate into RNA in the gastrointestinal mucosa and reduces incidence of diarrhea. CDHP is a reversible inhibitor of dihydropyrimidine dehydrogenase(DPD). It has been suggested that HFS is elicited by 5-Fu catabolites. When DPD-inhibitors are added to fluoropyrimidines or patients with a DPD-deficiency, the incidence of HFS are lower. Therefore, S-1 may decrease the incidence of neurotoxicity and cardiotoxicity [7-9]. S-1 has comparable efficacy results compared to capecitabine in gastric cancer by several trials in Japan and Korea [10-12]. Some phase II/III trials demonstrated that S-1 was as efficacious as capecitabine with respect to overall survival (OS) and progression-free survival (PFS) in mCRC and reduced the frequency of adverse events [13-17] We intent to compare the efficacy and safety of S-1 (Tegafur Gimeracil and Oteracil Potassium Capsules, ShanDong Newtime Pharmaceutical Co.Ltd) or Capecitabine Tablets (Xeloda, F.Hoffmann-La Roche, Basel, Switzerland) monotherapy or doublet chemotherapy (including oxaliplatin, irinotecan, raltitrexed, elemene and others) as first-line treatment in mCRC patients in real world study in China.

This was a multi-center, retrospective observational study conducted at 10 centers including the Harbin Medical University Cancer Hospital, the First Affiliated Hospital of Harbin Medical University, the LiaoNing Cancer Hospital & Institute, the General Hospital of Shenyang Military, AnYang Tumor Hospital, Haikou People's Hospital, Hospital of HeBei Medical University, HeNan Cancer Hospital, JiangSu Cancer Hospital, and Affiliated Hospital of JiangSu University. It aims to compare the efficacy and safety between two groups as the first-line treatment in patients with mCRC in a real clinical setting. Patients were eligible for this study if they had metastatic colorectal cancer (the primary cancer) and had not received prior chemotherapy for metastatic disease. After screening to establish eligibility, patients were naturally divided into the S-1 group and Capecitabine group according to real clinical treatment. The electronic medical record should be collected over a continuous time to avoid the bias caused by confounding factors as much as possible. The primary objective is comparing the 2-year overall survival rate of S-1 or Capecitabine monotherapy or doublet chemotherapy as first-line treatment in patients with mCRC in a real clinical setting. Secondary endpoints included the safety including myelosuppression (blood-related indicators), liver and kidney toxicity (related indicators of liver and kidney function), cardiotoxicity (electrocardiogram), gastrointestinal side effects (Nausea and Vomiting, Diarrhea) and hand-foot syndrome, namely grade 3/4.

Patients were required to have the following criteria: 1) pathological diagnosis of metastatic colorectal cancer; 2) patients without prior chemotherapy or with S-1 or Capecitabine as first-line treatment for recurrence after adjuvant chemotherapy; 3) receive S-1or Capecitabine monotherapy or doublet chemotherapy at least 1 cycle of treatment; 4) not perform radiotherapy for target lesions during the treatment; 5) expected survival greater than 3 months. Exclusion criteria: 1) patients treated with immunotherapy or targeted therapy concurrent with chemotherapy; 2) patients with radical surgery or local treatment during chemotherapy; 3) patients accompanied by a second primary tumor. Based on the clinician's experiential suggestion, demographics, medical history, disease factors, chemotherapy cycle, as well as other critical factors influencing the prognosis of patients should be included as baseline characteristics. If there are systematic differences in the distribution of baseline characteristics between two groups, propensity score methods are an appropriate tool for the analysis of this study which can minimize the effect of confounding and reduce the bias.

According to different analytical purposes, the set of patients whose data are to be included in the final analyses. Patients who are diagnosed with mCRC between June 2013 and June 2016 in 10 centers above, treated by S-1 or Capecitabine monotherapy or doublet chemotherapy as first-line chemotherapy, eligible for the inclusion and exclusion criteria with at least one safety observation and have follow-up data should be included. Consider that the prevalence of missing data in a retrospective study, analysis would be performed on the non-missing data. For matching variables, missing data should be excluded. All the variables will be summarized using descriptive statistics by treatment group. For categorical variables, frequency and percentage for each category will be presented. For continuous variables, the number of observation, mean, standard deviation (SD), median, minimum and maximum will be presented. 95% confidence interval will be provided if necessary. All statistical hypothesis tests were performed at two-sided significance level 0.05. We used SAS (version 9.4) for all statical analyses. The OS in two groups will be presented graphically by the Kaplan-Meier curve.

According to the inclusion and exclusion criteria, 1367 patients were eligible, including 824 males and 543 females with a median age of 60 years. Among them, 546 cases were in the S-1 group, 315 males and 231 females, with a median age of 60 years; 821 cases of the Capecitabine group, 509 males and 312 females, with a median age of 60 years (Table 1). Patients, if adverse reactions occur such as myelosuppression, gastrointestinal side effects and hand- foot syndrome, should be treated immediately. There was no statistically significance in gender, age, BMI and KPS scores between the two groups. The male to female ratio is about 3: 2; consider the median age (60 years), the number of patients with age older than 60 and less than 60 is similar. The BMI of patients with colorectal cancer was mostly between 18.5 and 28, and the KPS score was the highest at 80 and 90. Before matching, all the observations with missing values of matching variables would be eliminated. 1:1 Nearest Matching should be appropriate for the sample ratio of two groups is close to 1:1 and would be implemented by R3.3.1 software (Figure 1,2). The final matching result was 533 people in each group (Table 2,3).

The Pre- and Post- matching patients in two groups.

The distribution of propensity score 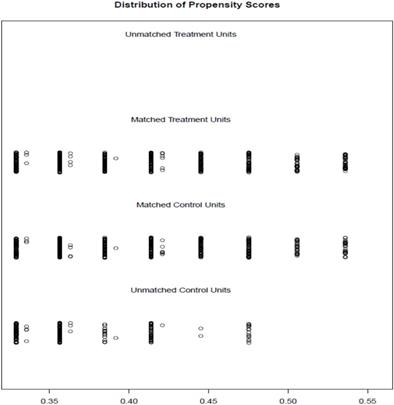 The histogram bar of propensity score 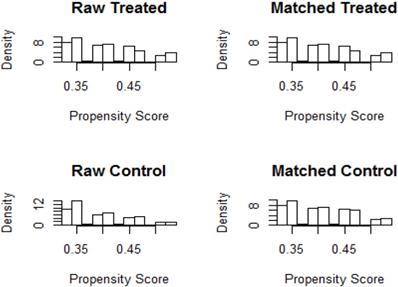 Overall survival in two groups. The 2-year survival rate in the S-1 group and capecitabine group were 61.91 and 62.85%, respectively, of which the difference was no statistically significant (p=0.9954). 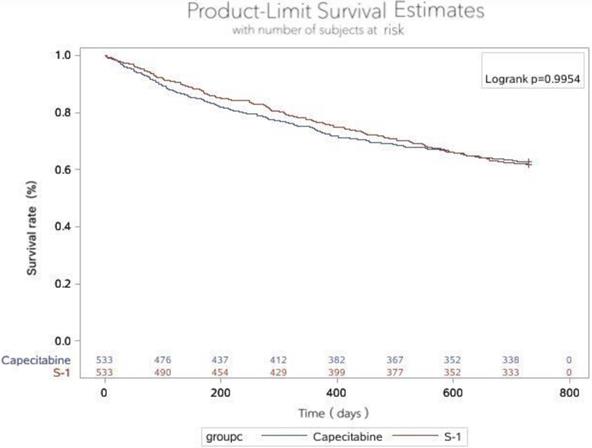 Compared to capecitabine, S-1 had a similar 2-year OS rate but had a lower incidence of adverse events in the real clinical setting. So, S-1 could be a good choice in the first-treatment of patients with metastatic colorectal cancer in real-world in China.

22. Schmiegel W, Reinacher-Schick A, Arnold D. et al. Capecitabine/irinotecan or capecitabine/oxaliplatin in combination with bevacizumab is effective and safe as first-line therapy for metastatic colorectal cancer: a randomized phase II study of the AIO colorectal study group. Annals of Oncology. 2013;24:1580-1587