Maternal and neonatal outcomes of cancer during pregnancy: a multi-center observational study

Cancer during pregnancy has increased because of the increased maternal age at the time of the first pregnancy and/or second child policy in China. The main purpose of the study is to report the existing data concerning the maternal and children's outcomes in pregnant women complicating cancer. In this multi-center, prospective cohort study, we compared women diagnosed with cancer during pregnancy and their children with matched women without cancer diagnoses. The primary outcomes were maternal and children's mortalities, as well as the Ages and Stages Questionnaires-3(ASQ) of children. A total of 80,524 pregnant women were screened. Of whom 83(0.1%) were diagnosed with cancer during pregnancy. Death occurs in 42.2% (35/83) women during follow-up. During pregnancy, 24 women terminated pregnancy before 28 weeks and among this 8(33.3%) died. Ten women received chemotherapy and 49 did not receive chemotherapy. Compared with the matched controls, there were less incidences of premature rupture of membrane (5.1% vs 35.6%, P=0.000) and more caesarean rates (84.7% vs 52.5%, P=0.001) and with higher pregnancy order (2.7±1.7 vs 2.0±1.0, P=0.007) in pregnant women with cancer. These women also had increased mortality compared with control group (45.8% vs 1.7%, P=0.000). Women who received chemotherapy had a statistically significant lower mortality rate when compared to the non-chemotherapy group (1:9 vs 26:23, P=0.016). However, there were no differences found in mortality of children and ASQ assessment between two groups. Chemotherapy may result in reduced mortality of women diagnosed with cancer during pregnancy, without affecting the mortality of children and ASQ-associated development.

However, pregnant women diagnosed with breast cancer who have received treatment compared to non-pregnant women lead to a similar survival[3]. In contrast, terminating pregnancy did not produce a survival benefit in pregnant women diagnosed with breast cancer, one of the most common malignancies[4]. Many chemotherapeutic drugs which are toxic can pass through the placenta, and influence cell division of fetus. This may inhibit fetal and subsequently neonatal development. However, the majority of children who were exposed to chemotherapy in utero did not demonstrate significant complications[3]. A multi-center study also showed that delayed termination of pregnancy or cancer treatment did not impair the cognitive, cardiac, or general development of children in early childhood[5].

This was a prospective, multi-center cohort study conducted in Daping Hospital, Xinqiao Hospital and Xinan Hospital of Third Military Medical University from Jan, 2012 to Jan, 2017. The study was approved by the Ethics Committee of Daping Hospital and research institute of surgery and registered at http://www.chictr.org.cn. (ID: CHiCTR-ERC-17012146). It was from a prospective protocol, and informed parental written consents were obtained prior to study. The trial was performed in accordance with the approved guidelines and regulations of the participating institutions.

Control children were matched in a 1:1 ratio and must meet four criteria simultaneously: (1) Born to pregnant women without cancer in the same hospital; (2) Mothers adjacent to the pregnant women with cancer among the mothers satisfied matched conditions; (3) Mothers with similar infants that are gestational age and less than three days and (4) Mothers with the similar other pregnancy complications at birth.

The clinical data of all enrolled pregnant women and their neonates were collected, including obstetrical care, neonatal, and oncologic data in standardized case report forms.

We also obtained the living conditions on women and their children. If the children were alive, the Ages and Stages Questionnaires-3(ASQ) scores of children were recorded either by face-to-face or telephone testing.

Evaluation of primary and secondary outcomes

The Ages and Stages Questionnaires (ASQ)

From Jan, 2012 to Dec, 2016, a total of 80,524 pregnant women were screened (32,263 came from Xinan Hospital, 23,692 came from Xinqiao Hospital and 24,569 came from Daping Hospital, respectively). Among these 83 were diagnosed with cancer during pregnancy, and the rate of cancer during pregnancy was 0.1% (83/80524). Thirty-five women died during the follow-up, and the rates of mortality were 42.2%(35/83). The main five cancers were leukemia, thyroid carcinoma, cervical carcinoma, ovarian cancer and breast cancer. During pregnancy, 10 women received chemotherapy, no women received radiotherapy, and 49 did not receive chemotherapy until delivery. Twenty-four pregnant women, with a mean age of 29.9±6.5 years, terminated the pregnancy before 28 weeks and received the cancer-associated treatment. Among these women, 8(33.3%) died with mean follow-up time of 37.0±20.0 months. Of them, 19 came from country area, and other 5 came from urban area. Finally, 59 pregnant women with cancer were included, with mean follow-up time of 29.7±17.8 months, and 59 neonates were matched as controls and finished the analysis (Fig. 1). The main clinical characteristics and outcomes of women diagnosed with cancer during pregnancy and the matched controls are shown in table 1.

The flow diagram of study design and recruitment 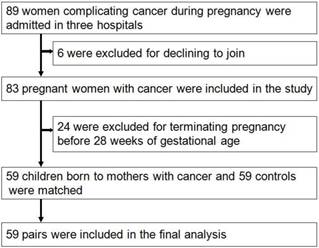 Of 59 pregnant women with cancer, the rates of preterm premature rupture of the membrane was 3.61%, pregnancy induced diabetes was 4.82%, and intrahepatic cholestasis of pregnancy was 1.20% respectively. Cesarean section rates were high with 21 (35.6%) infants born via urgent cesarean delivery, 29 (49.1%) born via elective cesarean delivery, and the 9 (15.3%) born via vaginal delivery.

The distribution of cancer in 83 pregnant women. the 5 main cancers was leukemia, thyroid carcinoma, cervical carcinoma, oophoroma and breast cancer. 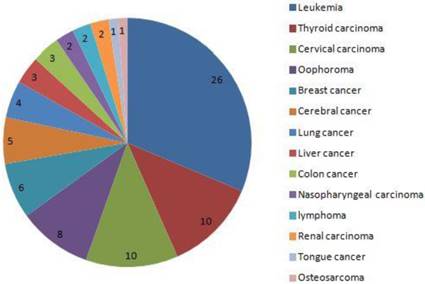 Clinical characteristics and outcomes of women diagnosed with cancer during pregnancy in 59 continuing pregnancy and the matched women without cancer.

The primary and secondary outcomes of women and their children in 59 continuing pregnancy.

The distribution of cancer in 35 dead women. the 5 main cancers was leukemia, thyroid carcinoma, cervical carcinoma, oophoroma and breast cancer. 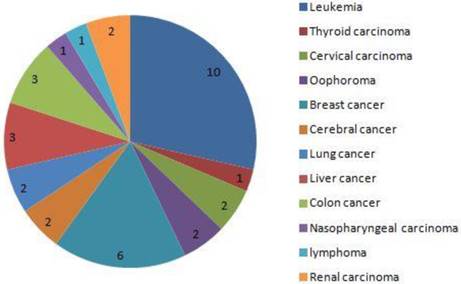 The average maternal ages of the five main cancers. 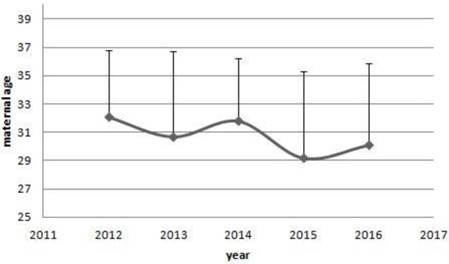 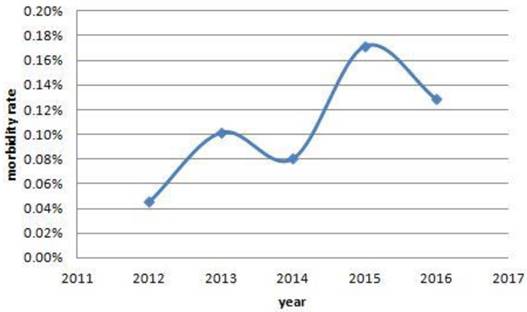 In this multi-center, prospective cohort study, we aimed to analyze the existing data regarding the maternal and children's outcomes, of mother with cancer diagnosis during pregnancy. Our observations suggest that chemotherapy may be feasible and safe during the second and third trimester pregnancy and improve the prognosis of women, and no adverse effects related to the chemotherapy were seen in both women and their children.

Previous several studies have compared the effects of cancer during pregnancy on the growth and development of children, and the results are inconsistent. Cardonick E et al.3 showed that the majority of children who were exposed to chemotherapy in utero did not demonstrate significant complications, and Murthy RK et al. [9] reported that, during the second and third trimesters, pregnant women with breast cancer can be treated with 5-fluorouracil, doxorubicin, and cyclophosphamide safely without concerns for serious complications or short-term health concerns for their offspring who were exposed to chemotherapy in utero. With regards to long-term outcomes, Amant F et al. reported that fetal exposure to chemotherapy was not associated with increased central nervous system, cardiac or auditory morbidity, or with impairments to general health and growth compared with the general population[10]. Similar result was reported by Abdel-Hady el-S, et al. [11]. Recently, the multi-centered study that compared children of mothers with cancer during the pregnancy with matched children of women without a cancer also showed that prenatal exposure to maternal cancer with or without treatment did not impair the cognitive, cardiac, or general development of children in early childhood[5]. Our data is consistent with the reports of Gwyn K. [12] and Hahn KM et al. [13]. Where cancer with and without chemotherapy administered during the second and third trimester does not seem to affect both short and long term development of children[14]. In contrast, previous studies demonstrated chemotherapy during embryogenesis increased risks of spontaneous abortions and major birth defects[15] and stillbirth, fetal growth restriction, premature birth, and maternal and fetal myelosuppression[16].

Chemotherapy during pregnancy can result in significant side effects to the fetus, the children, and their mothers. For the fetus and the children, these harmful effects include malformations, organ toxicity, death and delayed development if they survive; For the mothers, the death due to delayed treatment can occur at a rate of 1%-3%[17]. Chemotherapy administrated early in pregnancy increased fetal malformation to 12.7%-17%, as well as low birth weight by 40%[1]. In the present study, chemotherapy was administratered to 10 women during the second and third trimesters. As a result, there were no chemotherapy-associated neonatal malformations. In addition, there were no difference in body weight, death and ASQ assessment in the treatment group in consistent with previous reports of. Cardonick et al. [3] demonstrated that pregnant women diagnosed with breast cancer receiving chemotherapy have similar survival rates when matched for stage at the time of diagnosis. Furthermore, Yang WT, et al. [18] has shown that compared with non-pregnant women, there was no significant difference at each stage of 5-year survival in pregnant women. These observations are consistent with our findings where chemotherapy seems to improve survival in pregnancy complicated by cancer diagnosis.

In our population compared with continuing pregnancy, terminating pregnancy did not result in reduced maternal mortality (8/16 vs 27/32, P=0.336), and which was consistent to several previous reports of Zemlickis D, et al. [19] and Framarino-Dei-Malatesta M, et al.[20] Based on these observations immediate termination may not be routinely needed as the maternal and fetal outcomes did not appear to be compromised if chemotherapy is delayed to second trimester and beyond[21]. In contrast, Deemarsky LJ, et al. [22] reported a worse prognosis for 14 women who terminated the pregnancy, compared with 8 who continued the pregnancy. Another study also showed that, compared with not pregnant women, there was a higher mortality in pregnant women[23].

One of the possible causes to explain the inconsistence could be the different types and stages of cancer among different studies. As is known, there are statistically significant differences in survival among the different stages of cancer. The stage distribution of the controls was statistically significantly different from that of the pregnant women (0.025 < P < 0.05) in the results of Zemlickis D, et al. [19] However, Framarino-Dei-Malatesta M, et al. [20] did not demonstrate differences in any stages and grades of cancer. Further analysis[19] found that, compared with the controls, there were statistically lower number of women diagnosed with stage I disease (P=0.015) and higher proportion of women diagnosed with stage IV(P=0.013) in the pregnant group.

Another study in China demonstrated increased preterm rupture of membrane and caesarean section in women complicating cancer during pregnancy[24]. It was similar to our observations. We conferred that the women complicating cancer during pregnancy was nervous and anxious, and they were inclined to terminate pregnancy earlier and initiate treatment in the premise of avoiding toxicities of chemotherapy to fetus.

In the present study, the five main cancers were leukemia, thyroid carcinoma, cervical carcinoma, oophoroma and breast cancer. This is different from the report of Pavlidis NA.[1], where the most common malignancies associated with pregnancy included cervical cancer, breast cancer, melanoma, lymphomas, and leukemia.

In summary, our observations suggest that chemotherapy administrated in second and third trimesters may maximize the benefits of both the mothers and their children. Given the side effects of chemotherapy drugs and heterogeneities of cancer types, more similar study and further follow-up of children are needed. Recently, we have organized a multi-centers trial included 83 hospitals, the maternal age and single tumor and their TNM stage were matched in the study and the aim was to describe the available data on women with and without cancers diagnosed during pregnancy. Maternal outcomes and their children's short-term and long-term outcomes, and the results may give us more reasonable justifications.