Background: The molecular function of pannexin1 (Panx1) in different tumor types has been remained equivocal. Until now, there is no study focused on the function of panx1 in hepatocellular carcinoma (HCC). This study aimed to explore the role of Panx1 in the invasion and metastasis of HCC.

Methods: The expressions of Panx1 in 126 cases of HCC were analyzed by immunohistochemistry (IHC). The effects of Panx1 on HCC cell metastasis and invasion were observed by transwell. The expression levels of Panx1 and epithelial-mesenchymal transition (EMT) related proteins in HCC cells and tissues were detected by western blot and IHC. The tumor metastatic abilities were compared between Panx1 knockout mice and nude mice.

Conclusions: Our results suggest that the high expression of Panx1 is associated with poor HCC prognosis, providing a new clue for effective intervention for HCC metastasis.

Hepatocellular carcinoma (HCC) is one of the most common malignant tumors in the world; it ranked the third leading cause of cancer death [1]. As it is difficult to detect HCC in early stages, only 10%-20% of patients are able to go through radical surgery [2, 3]. Despite the advanced diagnosis and treatments, the prognosis of patients with HCC remains poor due to the high recurrence and metastasis rate. In addition, the mechanism of HCC is still enigmatic [4-6]. Therefore, the identification of potential biomarkers and novel mechanism of metastasis are of great importance to better understand the occurrence reasons of HCC and provide potential treatments.

Panx1, a channel-forming glycoprotein, was named for its similarities with the invertebrate gap junction protein innexins [7]. Panx1 is a transmembrane domain composed of four alpha helices, two extracellular loops and one carboxy terminus [8]. The main function of Panx1 is to form macroporous single-membrane channels that release ATP and metabolites which play a prominent role in the exchange of information between cells [9]. It is widely expressed in most mammalian cells and tissues [10]. The metastasis of primary HCC was considered the main cause of cancer death [11,12]. Recent studies show that Panx1 is involved in the development of many human cancers. Paul et al. reported that Panx1 channel inhibitors reduce ATP release and thereby inhibit breast cancer metastasis [13]. Li et al. found that silencing Panx1 expression can reduce the proliferation of human glioma U87-MG cells [14]. However, in C6 gliomas, Panx1 was reported as a tumor-suppressive factor [15]. Until now, the role of Panx1 in the development of HCC has not been reported yet.

In this study, elevated expression of Panx1 in HCC was positively associated with vascular invasion, tumor metastasis and poor prognosis of patients. This study explained the related mechanism of Panx1 on the HCC invasion and metastasis, which provided a theoretical basis for the diagnosis and prognosis of HCC.

126 pairs of HCC and adjacent noncancerous tissue were collected from the Shanghai First People's Hospital between 2009 and 2016. All patients were diagnosed as primary HCC by pathology confirmedly and did not receive any radiotherapy or chemotherapy before surgery. The fresh specimens were processed immediately after surgical removal from the patient's body, then subdivided into three equal portions for histopathologic analysis, quick frozen in liquid nitrogen, or fixated in buffered paraformaldehyde. Staging criteria of HCC were based on the TNM staging which proposed by the Union for International Cancer Control (UICC) and the American Joint Committee on Cancer (AJCC). All patients had provided written informed consent on the use of clinical specimens for biomedical research.

C57BL/6J mice and nude mice were purchased from Shanghai Laboratory Animal Center (SLAC). Male C57BL/6 mice (specific pathogen-free (SPF)-grade) and Panx1 knockout mice (aged 6-8 weeks) were bred at the animal facility of Institute Pasteur of Shanghai under pathogen-free conditions. The nude mice were housed with free access to standard laboratory diet and water. All animal experiments in this section are approved by the Laboratory Animal Ethics Committee of the Chinese Academy of Sciences.

The invasive abilities of 97L and LM3 cells were detected by trans-well culture system. For invasion, the trans-well membrane of the upper chamber coated with Matrigel (BD Biosciences Discovery Labware, Woburn, MA, USA) was used. The chambers were rehydrated with serum-free medium for 2 h at 37℃ in an incubator. The top chambers were subsequently hydrated with 200 ul of cell suspension (containing 1 × 105 cells). The bottom chambers were added with 500ul of medium containing 10% FBS as a chemoattractant. After culturing for 24 hours at 37℃, the transmembrane cells on the lower surface of the membrane were fixed with formaldehyde at room temperature for 5 min, stained with crystal violet for 20 min, washed three times with clean water, and counted under a microscope.

In vivo detection of tumor invasion and metastasis

Ten nude mice were randomly divided into two groups. LM3 cells (1 × 106 cells/mice) stably transfected with retrovirus-Panx1 or retrovirus-control vector were injected by tail vein injection. The mice were sacrificed by dislocation before observing the lung metastasis two weeks later. The tumor metastases were compared between Panx1 knockout mice and wild-type mice. Hepa1-6 cells were planted in the armpit of mice and the tumor size was measured regularly.

Calculations were performed with GraphPad InStat, Version 5.0 (GraphPad Prism Software, San Diego, CA, USA). Student's two-tailed t-test was utilized for all data analysis and values were expressed as the mean ± standard error of the mean acquired from at least two independent experiments. P<0.05 was considered to indicate a statistically significant difference.

Panx1 promoted EMT of HCC were dependent on AKT signaling

To search for the potential link between Panx1 and the EMT signaling, we examined the molecular alterations in AKT signaling pathways that were important in EMT induction. The results showed that Panx1 promoted EMT of HCC via phosphorylated AKT in both LM3 and 97L cells (Figure 3). 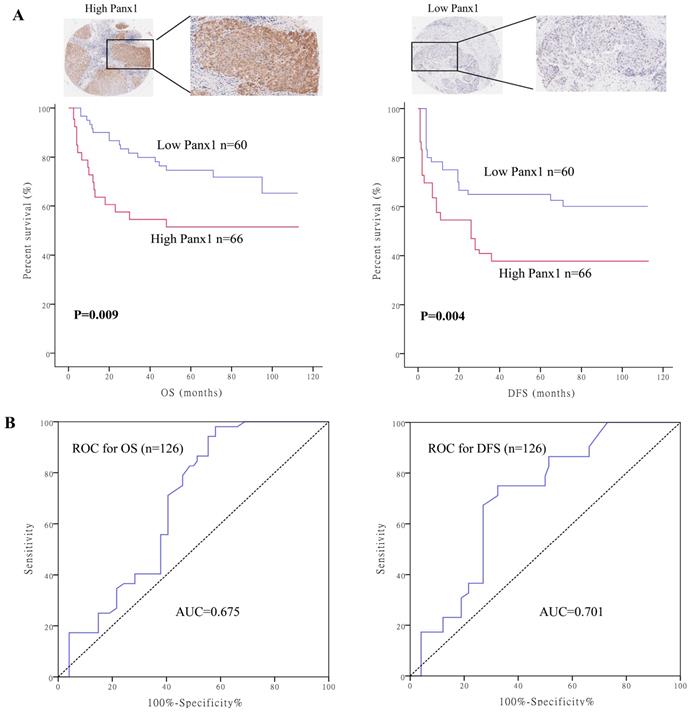 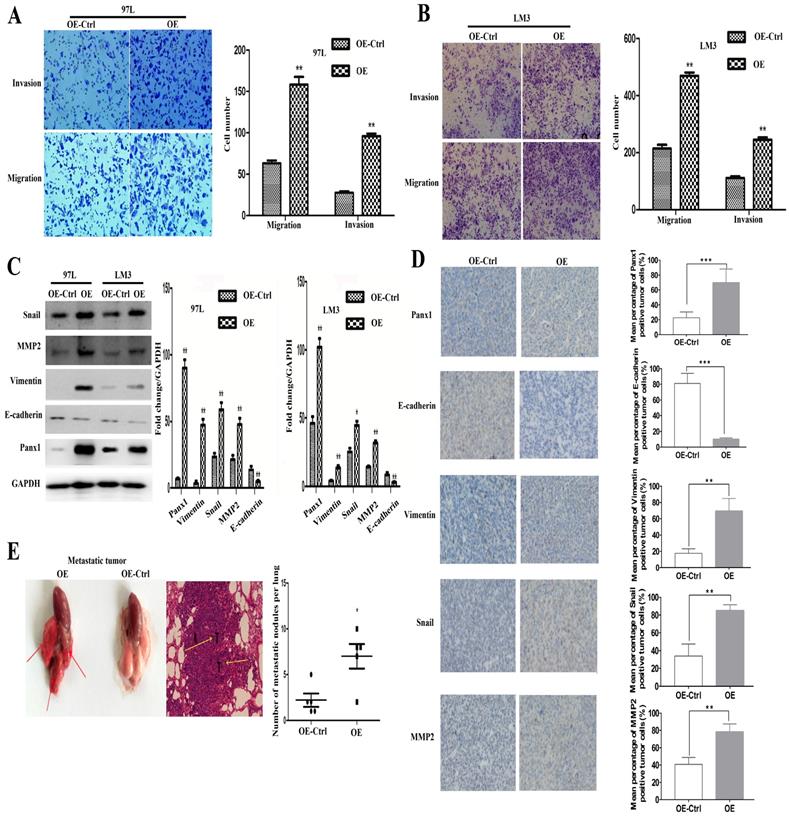 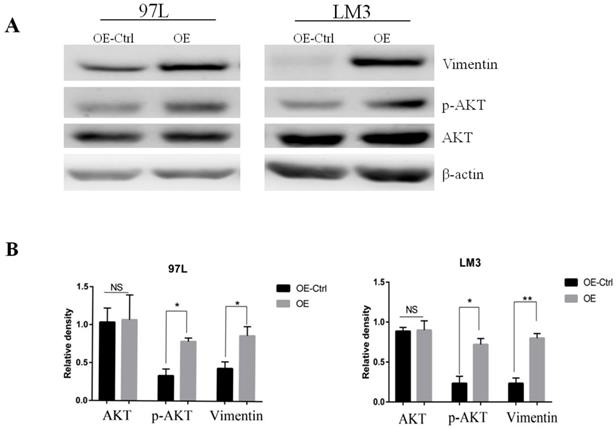 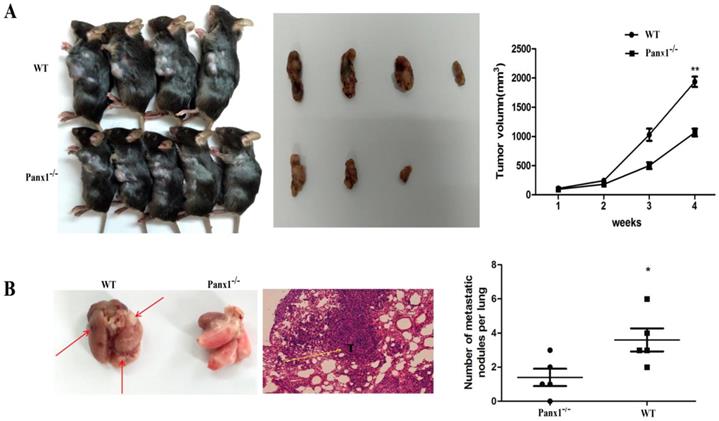 Although the clinical diagnosis and surgical treatment of HCC have made great progress, the mortality rate of HCC is still amongst the top three highest. The majority of patients with HCC have undergone intrahepatic or even distal metastasis in clinical treatments. Therefore, the development of new hepatocellular carcinoma diagnosis and prognostic factors is of urgent significance. Previous studies have revealed that Panx1 channels are involved in the regulation of cellular functions mainly through the mediation of ATP release and paracrine signaling [17-19]. However, this study mainly focused on the relationship between the expression level of Panx1 and the clinical indications in HCC patients as well as the role of Panx1 in HCC metastasis.

The expression of Panx1 was positively correlated with tumor TNM staging and venous invasion, negatively correlated with overall survival. At the same time, Panx1 expression levels and venous invasion could be used as an independent prognostic factor for the patients with HCC. Consistent with this, Stewart et al. reported that high expression levels of Panx1 are associated with poor OS of breast cancer patients [20]. This provides a new direction for us to find a novel indicator of HCC prognosis.

As we know metastasis is the main factor for HCC patients with a poor prognosis, and we speculated that Panx1 may have an related impact on the biological function of hepatocellular carcinoma cells. We established a Panx1 over-expressing hepatocellular carcinoma cell line and found that Panx1 overexpression promotes cell migration and invasion. Consistent with this, Silvia reported that the loss of Panx1 expression inhibits cell proliferation and migration on melanoma [21]. In Lai's report, on the contrary, they found that overexpression of Panx1 in gliomas suppresses cell malignancy [15]. The above researches on Panx1 in different tumors indicate that Panx1 plays a complex role in the development of cancer, resulting in different data which might relate to the genetic background of tumor cells, cell culture conditions or analytical methods of the researchers, which needs more researchers to explore and discuss. In this study, Panx1 was found to promote the transmembrane transformation of hepatocellular carcinoma cells by promoting the expression of Snai1, an EMT-related transcription factor. The expression of E-cadherin protein was down-regulated, the expression of vimentin and snai1 protein was up-regulated, and the expression of MMP2 protein was up-regulated, suggesting that Panx1 overexpression may promote cell migration and invasion. Subsequently, we used trans-well to detect the metastatic potential of the cells, comparing it with the control group, the ability of migration and invasion of the hepatocarcinoma cells with Panx1 overexpression group was significantly increased.

This showed that Panx1 can regulate cell migration and invasion by promoting epithelial-mesenchymal transition. However, the main focus of our follow-up study is to find out how Panx1 affects and regulates EMT-related gene expression. To further clarify the role of Panx1 in tumorigenesis, we established a tumorigenic model of subcutaneous nude mice with HCC cells and found that Panx1 promoted the tumor volume significantly. Meantime, we also planted hepa1-6 cells in the axilla of Panx1 knockout mice and obtained the same results, the lung metastasis of mice in the Panx1 knockout group was significantly lower than the wild-type. This showed that Panx1 can promote cell migration, which is consistent with previous experiments in vitro.

This present study investigated the clinical significance of Panx1 in HCC patients, but it still has some limitations. First, although high expression of Panx1 can predict the poor prognosis in HCC, it still lacks of registered clinical trial. Second, although we confirmed Panx1 promotes HCC invasion and metastasis in vitro and in vivo (included nude mice and Panx1 knockout mice), as well as EMT-related expression, we did not provide the detailed mechanism about how Panx1 promotes EMT-related expression.

This work was partially supported by grants from the National Natural Science Foundation of China (81702341, 81170447) and the Medical Engineering Crossing Project Grant Funded by Shanghai Jiaotong University (YG2016QN24).