The impact of Adult Comorbidity Evaluation-27 on the clinical outcome of elderly nasopharyngeal carcinoma patients treated with chemoradiotherapy or radiotherapy: a matched cohort analysis

Methods: 206 elderly patients with locoregionally advanced NPC treated from December 2006 to December 2016 were involved into analysis as the training cohort. Besides, a separate cohort of 72 patients from the same cancer center collected between January 2003 and October 2006 served as the validation cohort. By using propensity score matching (PSM), we created a balanced cohort by matching patients who received chemoradiotherapy with patients who received IMRT alone. Treatment toxicities were calculated between CRT and RT groups using the χ2 test. The primary endpoint was cancer-specific survival (CSS). Multivariate analysis was performed to assess the relative risk for each factor by using a Cox's proportional hazards regression model.

Results: The median follow-up was 39.0 months (range = 3-137 months). In the PSM cohort, patients in the CRT group achieved comparable survival compared with patients in the RT group. The 3-year CSS rate was 64.3% and 65.2%, respectively (P =0.764). In multivariate analysis, the addition of chemotherapy to IMRT was not an independent prognostic factor for CSS, whereas a high ACE-27 score was an independent risk factor. In subgroup analysis with ACE-27 score ≥ 2, the 3-year CSS rate was worse in patients from the CRT group (63.5% vs. 46.3%, P = 0.041).

Nasopharyngeal carcinoma (NPC) is endemic in Southern China and Southeast Asia [1]. It has been well established by a variety of prospective randomised trials and meta-analyses that concurrent chemoradiotherapy (CCRT) with or without adjuvant chemotherapy is superior to radiotherapy (RT) alone in treating locoregionally advanced NPC [2-6]. Consequently, CCRT with or without adjuvant chemotherapy has been recommended as the standard treatment regimen for locoregionally advanced NPC. However, since elderly patients are often accompanied with poorer performance status, multiple comorbidities and decreasing organ function, they are commonly excluded from clinical trials. Thus, the treatment guidelines are principally tailored for younger NPC patients.

The Adult Comorbidity Evaluation-27 (ACE-27) tool is a chart-based assessment method specific for the evaluation of comorbidity in patients with cancer [9, 15]. It was found by Sze et al. that elderly NPC patients, who had an ACE-27 score ≥2 after radical radiotherapy were associated with worse survival outcomes than their counterparts with an ACE-27 score <2 [16]. Comorbidity may exert an adverse effect on survival outcomes of cancer patients by acting as a competing cause of death or by impairing use, tolerability, or effectiveness of treatments such as chemotherapy [8]. Therefore, a reliable assessment of comorbidity is required to distinctly estimate the potential benefits and risks of chemotherapy.

Since intensity-modulated radiation therapy (IMRT) has shown excellent locoregional control in NPC, the survival benefit brought by chemotherapy has been impaired in comparison. Distant metastasis remains the most difficult treatment challenge for elderly patients with NPC [17]. Yang et al. demonstrated that CCRT was favorable for NPC patients aged ≥60 years with high EBV DNA levels but not for subgroups with low EBV DNA levels [18]. In a subgroup analysis of 57 cases of elderly patients (age ≥70 years) with stage I- IV NPC and an ACE-27 score ≥2, Jin et al. showed that CRT reduced the overall survival (OS) rate for this subgroup with a borderline significance, compared with IMRT treatment on its own [19]. However, this study was limited by small sample size and its retrospective nature, thus a matched cohort study with a larger sample size would be better suited to confirm the efficacy of chemotherapy on elderly patients. Furthermore, such a study would better elucidate which subgroup benefit most from chemotherapy. It is not clear whether or not chemotherapy contribute to expanding the life span of elderly NPC patients in the IMRT era. Therefore, we performed a two-centre matched retrospective analysis of a relatively large cohort to identify the prognostic value of ACE-27 for risk stratification, and also investigated the efficacy of chemotherapy on stage III-IV NPC patients older than 70 years.

All patients received a physical examination, complete blood count, liver and renal biochemistries, fiber-optic endoscopy of the nasopharynx, chest radiograph, abdominal ultrasonography, magnetic resonance imaging (MRI) or computed tomography (CT) of the nasopharynx and neck region, and a bone scan by emission computed tomography (ECT). All patients were re-staged based on the 7th AJCC/UICC staging system. We performed the ACE-27 assessments according to our previous study [20] and followed the principles of the Comorbidity Coding Book (Additional file 1). ACE-27 score at presentation was retrospectively determined by review of medical records. The Common Terminology Criteria for Adverse Events (CTCAE) version 4.0 was used to grade treatment-related acute toxicities. Acute and late radiation related complications were graded according to the Radiation Therapy Oncology Group/European Organization for Research and Treatment of Cancer (RTOG/EORTC) Late Radiation Morbidity Scoring Schema [23]. All patients were treated in accordance with principles of treatment for NPC patients at SYSUCC. More detailed information on treatment is available in Supplementary Materials (available online). 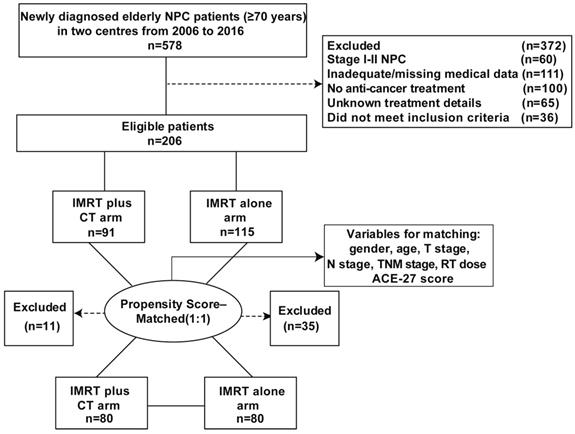 From December 2006 to December 2016, we retrospectively included 206 stage III-IV NPC patients over 70 years old in the training cohort. Clinical characteristics of the whole cohort were listed in Table 1. There were 91 cases in the CRT group and 115 cases in the RT group. The male-to-female ratio was 3.6:1 and the median age of all patients was 73 years old. There was a significantly higher proportion of patients aged over 75 years and TNM stage III in patients without chemotherapy (P < 0.001 and P = 0.002, respectively). Thereupon, we matched the two groups for all potential prognostic factors at a ratio of 1:1 to reduce potential bias. Finally, a well-balanced cohort was created with 160 patients (all P > 0.05) (Table 1). From January 2003 to October 2006, seventy-two elderly patients with locoregionally advanced NPC at the same institute were served as the validation cohort. The validation cohort was also created by PSM method and the characteristics of patients were shown in Table S1. 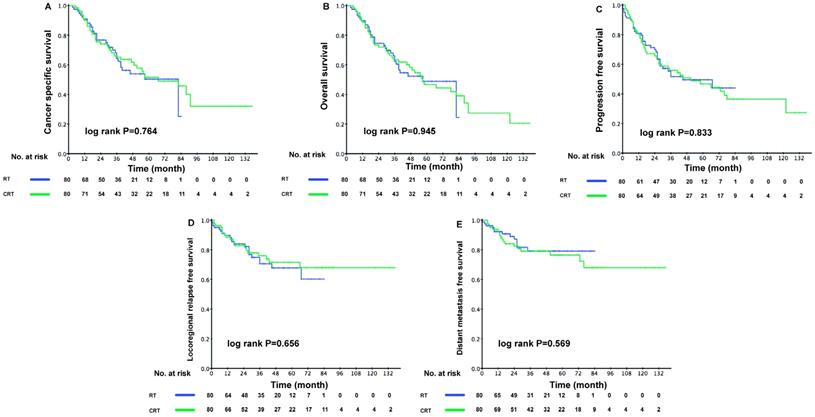 The effect of toxicity in each group was shown in Table 3. The rates of G2-G3 hematological toxicities (leukocytopaenia, neutropaenia, anaemia, and thrombocytopaenia) were higher in the CRT group compared with the RT group. Moreover, a significantly higher frequency of G2-3 nausea and vomiting (27.5% vs. 2.6%, P < 0.001) was noted in patients receiving chemotherapy. The incidences of skin reactions and mucositis were similar in both groups. However, the CRT group was found to develop hepatotoxicity with higher chances. No noticeable distinction between the treatment groups were observed in terms of late toxicities including deafness, xerostomia, neck fibrosis and trismus.

# According to the 7th edition of UICC/AJCC staging system

To the best of our knowledge, this is the first matched cohort study from two centers to explore whether CRT is superior to RT in locoregionally advanced NPC patients aged ≥70 years based on different risk stratification of ACE-27 scores in the IMRT era. Since the elderly generally present with one or more comorbidities and are more inclined to die from the comorbidities rather than the tumor itself, CSS could be a more accurate and specific prognostic indicator than OS without influence from other factors. In the present study, we could not demonstrate that the addition of chemotherapy to IMRT could improve survival in locoregionally advanced NPC patients aged ≥70 years. Nonetheless, ACE-27 and TNM stage played critical roles in predicting survival of elderly patients with locoregionally advanced NPC. An ACE-27 score ≥ 2 revealed poorer CSS. Furthermore, in the subgroup analysis of patients with ACE-27 score ≥2, CRT was significantly associated with unsatisfactory survival compared with IMRT alone.

A previous retrospective analysis which enrolled 126 patients older than 70 years with stage I-IV NPC showed that there was no superiority in CRT compared with IMRT alone. Additionally, a subgroup analysis of patients with ACE-27 score ≥2 was performed to further confirm the OS benefit from CRT in this study but unfortunately, due to the small sample size of 57 patients, only borderline significance was demonstrated [19]. Our findings were consistent with the aforementioned evidences, with the exception that after PSM analysis, the CRT group had a worse survival outcome than the RT group because of a higher rate of grade 3-4 acute toxicities observed in the patients with ACE-27 ≥2. Yang et al. illustrated that CCRT was beneficial for stage II-IVB NPC patients aged ≥60 years [18]. However, only 23.7% of patients had stage II NPC in the aforementioned study, whereas our study was conducted within a stage-specific cohort and only enrolled elderly patients aged ≥70 years with stage III-IVB NPC. Such a methodological difference may account for the observed inconsistency in treatment outcomes between the two studies.

The effect of ACE-27 tool for prognostic risk assessment and treatment stratification has been investigated in various cancers [9, 11-13, 16, 26-29]. A retrospective study from England failed to reveal the significant effect of ACE-27 on the prognosis of 59 NPC patients but this study was underpowered due to its small sample size [28]. Sze et al. identified ACE-27 as the only predictive variable for mortality at 90 days and the most important prognostic factor for OS in NPC patients aged >70 years. However, no more than 30% patients in this study were treated with IMRT [16]. Giacalone et al. suggested that the recommendation of treatment on the basis of reduced Prostate-Specific Antigen (PSA) failure derived from early results of randomized controlled trials (RCTs), and while it was unlikely to prolong survival in men with moderate-to-severe comorbidity, it may extend survival in men with no or minimal comorbidity [29]. Our study confirmed that the ACE-27 score is an independent prognostic factor for the survival of elderly patients with locoregionally advanced NPC after IMRT. Therefore, the utility of ACE-27 should be taken into account with respect to patient selection and treatment strategy.

In the present study, we performed a subgroup analysis based on different risk stratification of the ACE-27 scores. We revealed a negative association between CRT and CSS-/OS-related survival in elderly patients with an ACE-27 score ≥2 compared with those received IMRT alone. In the meantime, elderly patients with an ACE-27 score <2 showed similar survival benefits between the two treatment regimens. The following evidence may provide further support to these data. Patients with comorbidities may be more prone to suffer from severe treatment-related toxicities, dose delays or reductions, therefore it is possible they do not survive long enough to derive expected benefits from chemotherapy [8]. Given more severe acute toxicity, poorer tolerance, and worse survival outcomes, chemoradiotherapy should only be considered in elderly patients aged ≥70 years with locoregionally advanced NPC, especially in those patients with severe comorbidities. Therefore, it is of necessity to perform a comprehensive assessment of comorbidity in elderly patients afflicted by NPC before treatment. Relatively safe and effective therapeutic strategies such as vascular endothelial growth factor (VEGF) inhibitor, Epstein-Barr virus (EBV)-specific vaccines, along with novel immunotherapies targeting immune checkpoints may offer promising alternatives for elderly patients with locoregionally advanced NPC.

There are some limitations to our study. Firstly, the median follow-up duration was 39.0 months, and a longer follow-up duration is in need to observe the survival status beyond this. Secondly, due to the retrospective nature of the study, potential patient selection bias is unavoidable. What's more, EBV DNA concentration is one of the most important prognostic factors for the survival of NPC. However, patients with EBV DNA copy data only account for a small proportion of those in this study (data not shown). Therefore, further prospective randomized clinical trials should be conducted to confirm the effect of chemotherapy on elderly patients aged ≥70 years treated with IMRT.

An ACE-27 score ≥2 was significantly associated with poor CSS. Chemotherapy added to IMRT could not improve survival for locoregionally advanced NPC patients aged ≥70 years. In the subgroup analysis of patients with an ACE-27 score ≥2, the CRT group had poorer survival compared with the RT group.

15. Paleri V, Wight RG. Applicability of the adult comorbidity evaluation - 27 and the Charlson indexes to assess comorbidity by notes extraction in a cohort of United Kingdom patients with head and neck cancer: a retrospective study. J Laryngol Otol. 2002;116(3):200-5