ITGB4 is a novel prognostic factor in colon cancer

Integrin β4 (ITGB4) has been reported to be involved in carcinomas. Currently, ITGB4 has been characterized in colon cancer, however, its clinical significance is not very clear. In the present study, we utilized the large public datasets from NCBI Gene Expression Omnibus (GEO) and The Cancer Genome Atlas (TCGA) databases and collected clinical samples in our center to investigate the transcriptional expressions of ITGB4 in colon cancer, and then explored the associations of ITGB4 with clinicopathological features and overall survival. The statistical analyses suggested that ITGB4 mRNA expressions were up-regulated significantly in colon cancer. High ITGB4 expression was observed to be associated with elder onset age, proximal tumor location, and high microsatellite instability (MSH) status. Further, Kaplan-Meier curves and univariate analysis demonstrated high ITGB4 expression was significantly associated with unfavorable overall survival in colon cancer (HR=1.292, 95%CI=1.084-1.540, P=0.004). And significant association was also found after adjusting the confounding factors including age, gender, and stage (adjusted HR=1.254, 95%CI=1.050-1.497, P=0.012). The annotation of ITGB4 co-expressed genes suggested the pathways including cell growth, positive regulation of cell migration, and apoptotic signaling might be involved in the potential mechanisms of ITGB4 in colon cancer development. The molecular regulation mechanism of ITGB4 ectopic expression in colon cancer was also explored and the results indicated that ITGB4 might be up-regulated by the transcription factor FOSL1 (FOS like 1, AP-1 Transcription Factor Subunit) and its promoter hypomethylation. Our results revealed that ITGB4 might be a therapeutic target and prognosis marker for individual therapy of colon cancer.

Colorectal cancers (CRC) occur in the colon (colon cancer) or rectum (rectal cancer) and are the fourth leading cause of cancer-related deaths around the world [1]. Surgery and/or chemotherapy are the common methods in treatment of CRC. Despite the progress made in diagnosis and therapy, patients with CRC often develop recurrence and metastasis, which decrease the 5-year survival rate dramatically [1]. Therefore, it is urgent to reveal and understand the molecular mechanisms of CRC development and to find the potential biomarkers to improve CRC diagnosis, treatment, and prognosis.

The integrin (ITG) molecules are principal cell surface receptors responsible for cell extracellular matrix interactions [2]. They are formed by non-covalent associations of α and β dimers and modulate different signal transduction cascades. Up to now, 18 α and 8 β subunits have been found and form a number of distinct integrins [3]. ITGs are found to be involved in regulation of a variety of cell signaling pathways including migration, invasion, differentiation, proliferation, and survival, and are associated with cancer development [4-6]. Among them, integrin β4 (ITGB4), forming dimer with integrin α6 (ITGA6), is wildly studied in carcinomas [2, 7]. During carcinoma progression, the integrin α6β4 is released from hemidesmosomes, which allows it to be associated with the actin cytoskeleton [8]. Here, it activates RhoA, leading to membrane ruffling, lamellae formation, and the generation of traction forces and then promotes invasive and metastatic behavior [9, 10]. ITGB4 is aberrantly expressed in several cancers including breast, colorectal, and lung cancers and may be positively associated with poor prognosis [7, 11, 12]. However, the reports on the associations of ITGB4 with clinicopathological features and/or outcomes in colon cancer are rare.

The fresh primary tumor specimens and their corresponding adjacent non-tumor tissues were obtained from colon cancer patients underwent surgery in our center from 2016 to 2017. No patients had received radiotherapy and/or chemotherapy prior to surgery. The specimens were stored at -80°C immediately after surgery. Written informed consent was obtained from all patients and all procedures were approved by the Institutional Research Ethics Committee.

To compare the transcriptional expression difference of ITGB4 between colon cancer tissue and adjacent tissues and to investigate the associations of ITGB4 with clinicopathological features and prognosis in patients with colon cancer, gene expression profile data with corresponding clinical data was searched and downloaded from the publicly available NCBI GEO and TCGA databases. After reviewing the searching results, GSE17536 [13, 14], GSE39582 [15], GSE41258 [16], and GSE72970 [17] datasets were finally chose because they were consisted of large number subjects (more than 50 cases), analyzed by Affymetrix microarrays, and contained overall survival information. At the same time, TCGA colon cancer dataset was also downloaded. ITGB4 was split into high expression group and low expression group by optimal cut-off values which were obtained from with X-title software based on the overall survival [18]. Expressions of ITGB4 between tumor tissues and adjacent tissues were compared with paired or unpaired Mann Whitney U test, or one-way analysis of variance (ANOVA) followed by Bonferroni's multiple comparison tests. When comparing ITGB4 expression in healthy, adjacent normal, and tumor colon cancer tissues, the dataset GSE44076 was also included [19]. Associations of ITGB4 with clinical features including age, gender, T stage, N stage, M stage, TNM stages, microsatellite instability (MSI) status were determined by Fisher's exact test or Chi-square test. Furthermore, Kaplan-Meier plot curves and univariate/multivariate Cox proportional hazard regression analyses were performed to explore the correlations of ITGB4 with overall survival in colon cancer. All the datasets were also integrated to investigate the clinical significance of ITGB4 in colon cancer. In addition, to investigate the related genes during ITGB4 alteration that might be involved in colon cancer development, GSE41258 and GSE72970 datasets were chose for deep analyses. Differently expressed genes (DEGs) between ITGB4 high and low groups were obtained. And the expression correlations of the genes with ITGB4 were examined by Pearson's correlation analysis. Then ITGB4 co-expressed genes with P-value less than 0.001 were selected and overlapped with the DEGs. The final obtained genes were annotated by the Metascape online database (http://metascape.org)[20].

ITGB4 was upregulated in colon cancers

Associations of ITGB4 with overall survival in colon cancer 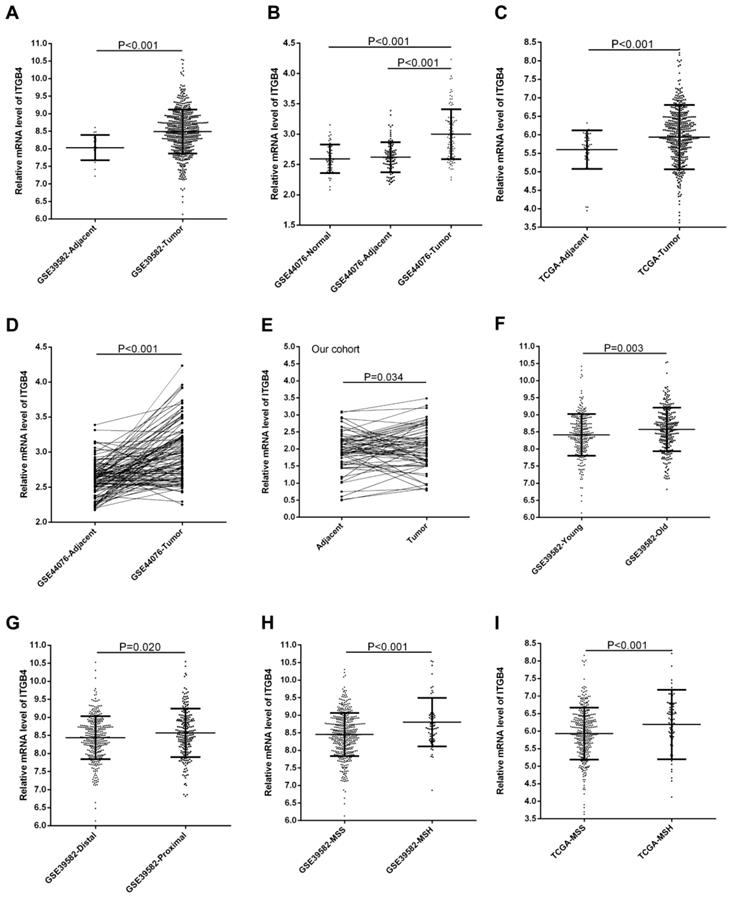 Analyses of the genes involved in colon cancer during ITGB4 alteration

To further understand the potential mechanisms of ITGB4 in colon cancer development, the genes that were differently expressed in different ITGB4 expression groups and were co-expressed with ITGB4 expression in GSE41258 and GSE72970 datasets were annotated with the Metascape online tool (http://metascape.org). A series of overlapped enriched biological processes were found in both GSE41258 and GSE72970, such as cell growth, positive regulation of cell migration, and apoptotic signaling pathways (Figure 4A). Protein-protein interaction network of the obtained genes was also constructed (Figure 4B). Then we also took several obtained genes as examples to present their associations with ITB4 expression in GSE41258 and GSE72970 datasets. The representative genes included Lamin A (LMNA) (Figure 5A and D), Peroxisome proliferator-activated receptor-δ (PPARD) (Figure 5B and E), and Paxillin (PXN) (Figure 5C and F). 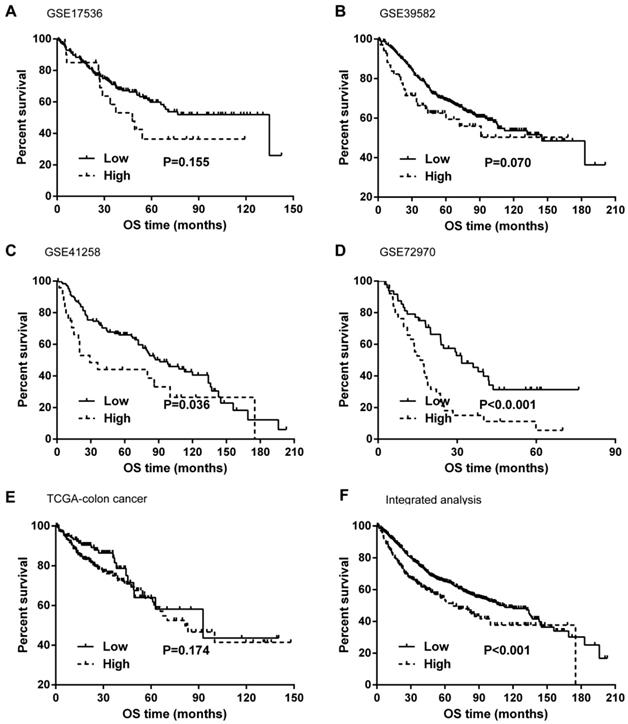 Previous published works have revealed the interactions of ITGB4 promoter with some specific transcription factors (TFs) under physiologic and pathologic conditions including KLF4, RUNX1, ZEB1, TP73, GLI1, JUN, MYC, and ZKSCAN3 [11, 21-27], suggesting ITGB4 transcription may be regulated by upstream transcription factors. We merged these TFs and the putative TFs binding to ITGB4 gene that were obtained from GeneHancer, a database of genome-wide enhancer-to-gene and promoter-to-gene associations and embedded in GeneCards [28]. Then all the TFs were overlapped with ITGB4 co-expressed genes in GSE41258 and GSE72970 datasets. Finally, only FOSL1 (FOS like 1, AP-1 Transcription Factor Subunit) was identified, which was significantly and positively associated with ITGB4 mRNA expressions (Figure 6A and B). The association was also verified in TCGA colon cancer cohort (Figure 6C). FOSL1 was also found to be highly expressed in colon cancer tissues as well as ITGB4 in TCGA-colon cancer cohort (Figure 6D). Furthermore, we performed an in silico analysis using JASPAR 2018 database [29] and identified a FOSL1::JUN binding site at -48 bp to -36 bp upstream of the transcriptional start site (TSS) of ITGB4 gene. ITGB4 transcription might be also regulated by microRNAs and its promoter methylation. Ferraro et al. have suggested that ITGB4 was a target of miR-21 and regulated by miR-21 in colon cancer [30]. With the data from TCGA-colon cancer cohort, however, we did not find the association of ITGB4 expression with miR-21 levels (data not shown). Then we predicted the microRNAs that targeted ITGB4 with comprehensive experimentally validated miRNA-gene interaction data collected from TarBase [31] and miRTarBase [32], and six microRNAs were identified including miR-1-1, miR-16-5p, miR-30a-5p, miR-1-3p, miR-155-5p, and miR-355-5p. Further analysis revealed that only miR-355-5p was slightly and negatively associated with ITGB4 expression (Figure 7). In addition, we determined the methylation of ITGB4 promoter and found methylation of ITGB4 promoter was negatively correlated with ITGB4 expression (Figure 8A) and down-regulated in colon cancer (Figure 8B). The above resulted suggested that ITGB4 might be up-regulated by the transcription factor FOSL1 and its promoter hypomethylation in colon cancer, which needed to be was needed validated in future work.

Associations of ITGB4 expression with overall survival in colon cancer

Pooling analysis of the adjusted hazard ratios for the associations of ITGB4 expression with overall survival in colon cancers from individual datasets. 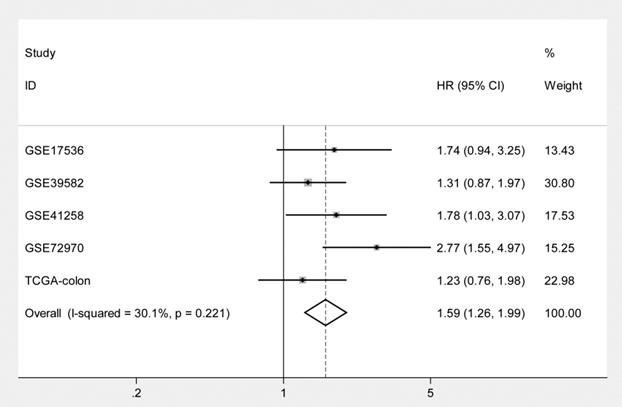 Associations of ITGB4 with 3 years, 5 years, and 10 years-overall survival in colon cancer

Annotations of the genes that were differently expressed in ITGB4 high and low groups and associated with ITGB4 expressions in datasets GSE41258 and GSE72970. (A) Gene ontology (GO) annotation; (B) Protein-protein interaction (PPI) network. 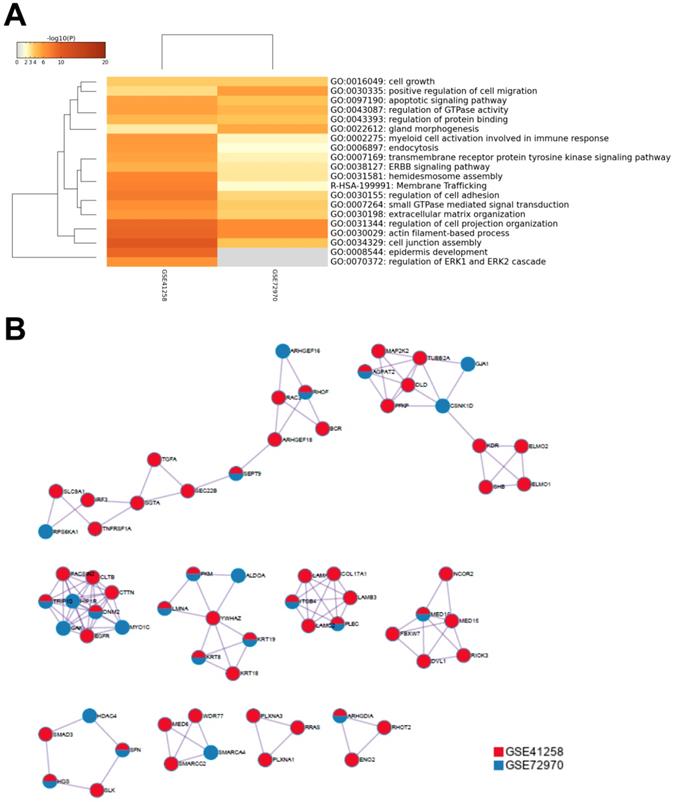 Correlations of ITGB4 expression with LMNA, PPARD, PXN, and SFN expressions in datasets GSE41258 and GSE72970. The genes mRNA expression data from datasets GSE41258 and GSE72970 was downloaded and the associations of ITGB4 with LMNA (A, D), PPARD (B, E), and PXN (C, F) were evaluated by Pearson's correlation analysis. Abbreviations: LMNA, Lamin A; PPARD, Peroxisome proliferator-activated receptor-δ; PXN, Paxillin. 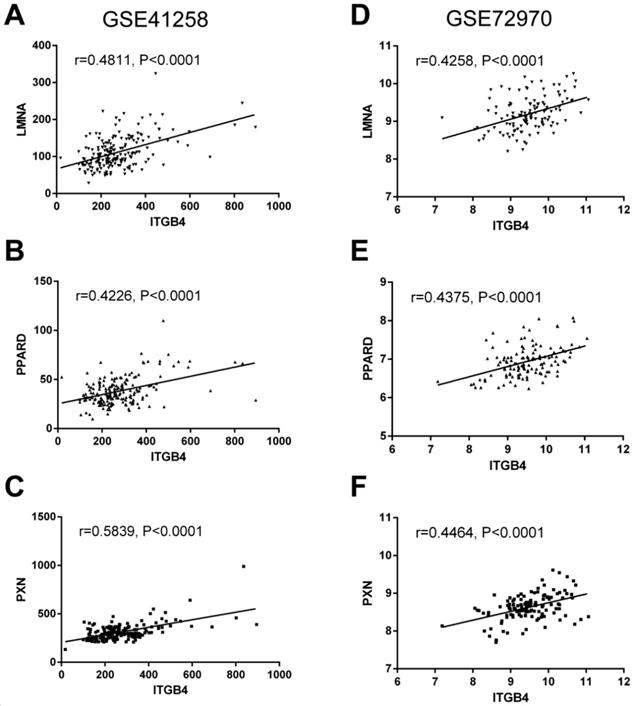 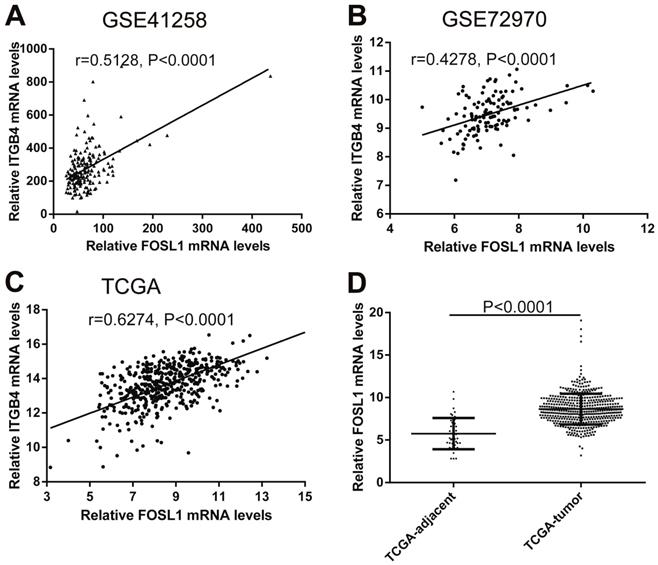 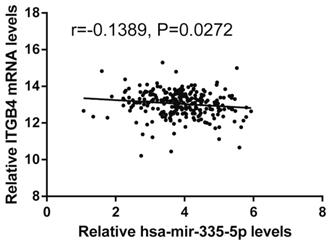 Currently, little was known on the molecular mechanism of ITGB4 in colon cancer. Tai et al. suggested that ITGB4 together focal adhesion kinase contributes to the tumor development of colon cancer [34]. Ferraro et al. suggested that ITGB4 is a target of miR-21 and regulates colon cancer cell migration [30]. To further understand the potential mechanisms of ITGB4 in colon cancer development, we annotated ITGB4 related genes and found several biological processes such as cell growth, positive regulation of cell migration, and apoptotic signaling pathways might be involved in ITGB4 regulation of colon cancer progression. LMNA, PPARD, and PXN were the representative ITGB4 related genes and participated in regulation of cell growth, migration, and/or apoptosis. In CRC, high LMNA expression can increase tumor invasiveness and a more stem cell-like phenotype and is associated poor prognosis [36]; high PPARD expression can promote tumor angiogenesis by enhancing epithelial-mesenchymal transition, migration, and invasion and is associated with significantly reduced metastasis-free survival [37, 38]; and high PXN expression can promote tumor invasion and confere 5-fluorouracil resistance via ERK-mediated stabilization of Bcl-2 protein, resulting in poor patient outcomes [39, 40].

In conclusion, ITGB4 is highly expressed in human colon cancer and associated with poor overall survival. The annotation of ITGB4 related genes suggested ITGB4 might promote tumor development via regulating a series of cellular pathways including cell proliferation. The elevated ITGB4 transcription in colon cancer might due to its upstream transcription factor FOSL1 up-regulation and its promoter hypomethylation. ITGB4 might be a therapeutic target and prognosis marker for individual therapy of colon cancer.

8. Rabinovitz I, Mercurio AM. The integrin alpha6beta4 functions in carcinoma cell migration on laminin-1 by mediating the formation and stabilization of actin-containing motility structures. J Cell Biol. 1997;139:1873-84