Background: Bevacizumab combined with chemotherapy is still one of the standard options for treatment of advanced non-small cell lung cancer (NSCLC) patients without driver mutations. Serum inflammatory factors, representing the systemic immune status, are shown to have complicated relationships with tumor angiogenesis, and proved to be associated with survival of advanced NSCLC patients. However, the information from the baseline factors is relatively limited, which cannot reflect the dynamic changes of systemic immune status during bevacizumab treatment. We, thus, attempted to evaluate longitudinal kinetics of systemic inflammatory factors during treatment of bevacizumab and to explore their predictive role in treatment response and patient outcomes in advanced NSCLC.

In the new era of target therapy, bevacizumab combined with chemotherapy is still one of the standard options for patients with advanced non-small cell lung cancer (NSCLC), especially for those without driver mutations.[1-3] However, the clinical benefit from bevacizumab for advanced NSCLC patients is disappointing, with the median overall survival (OS) of patients ranging from 12.3 months to 24.3 months.[1-3] Recently, the combination of bevacizumab and immune-checkpoint inhibitors has been investigated and shown to have promising outcomes in the treatment of advanced NSCLC.[4-6] Nevertheless, the time point of immunotherapy administration, and the reliable biomarkers for identifying suitable patients are largely unknown. Thus, the investigation of dynamic changes of immune status during treatment of bevacizumab may not only help to screen patients benefiting from bevacizumab, but also provide clinical evidence for combination of bevacizumab and immunotherapy.

More and more evidences showed that there is a complicated relationship between immune activities and angiogenesis in cancer.[7-9] On the one hand, antiangiogenic therapy with bevacizumab (VEGF blockage) was found to increase infiltration of T lymphocyte into tumors, inhibit proliferation of T-regulatory cell, and enhance maturation of dendritic cells, which was demonstrated to have positive roles in stimulation of immunological response.[10, 11] On the other hand, the tumor response of antiangiogenic therapy could also be influenced by immune cells.[12, 13] Bone marrow-derived immune cells could be attracted to the tumor tissue by different stimuli or cytokines, [14] and induce a VEGF-independent angiogenesis, rendering the resistance to bevacizumab.[15] Interestingly, serum inflammatory cells representing the systemic immune status, could not only reflect the status of tumor microenvironment; [16] but also play an important role in promoting proliferation of endothelial cells, inducing neovascularization and re-growth of tumor during bevacizumab treatment.[17-20] Thus, we propose that the systemic immune cells may be one of the indirect markers for monitoring the clinical response of bevacizumab in advanced NSCLC.

Systemic inflammatory factors, including neutrophil to lymphocyte ratio (NLR) [21], platelet to lymphocyte ratio (PLR)[22], systemic immune inflammation index (SII)[23], lymphocyte to monocyte ratio (LMR)[24], lactate dehydrogenase (LDH)[25], and C-Reactive Protein (CRP)[26] and others, have been reported to be useful for predicting patient outcomes in various malignant solid tumors. In advanced NSCLC[23] and colorectal cancer [27], high baseline NLR was further found to be associated with poor survival of patients receiving bevacizumab treatment. However, the immune status of both system and tumor microenvironments was not static, but with dynamic changes during bevacizumab treatment. Therefore, the study on the longitudinal changes of systemic inflammatory factors during bevacizumab treatment and their potential relation with the efficacy of bevacizumab may be more informative, and will be more precise for selecting appropriate patients to receive clinical benefits.

Consequently, the purpose of our study was to evaluate longitudinal kinetics of systemic inflammatory factors during bevacizumab treatment in advanced NSCLC patients and to explore their predictive role in the treatment response and patient outcomes.

This study was carried out in accordance with the principles of the 1975 Declaration of Helsinki and its later amendments or comparable ethical standards, and was approved by the Ethics Committee of Shandong Cancer Hospital Affiliated to Shandong University (No. SDTHEC201806002). For this retrospective study, formal consent was not required, while all data were kept confidential. 161 consecutive patients with advanced (IIIB/IV stage) NSCLC who underwent bevacizumab plus standard chemotherapy in Shandong Cancer Hospital, between June 2011 and February 2018, were included in this study.

The medical records of each patient were reviewed with respect to consecutive laboratory complete blood count during bevacizumab treatment and other clinical factors, including gender, age, smoking status, EGFR status, anatomical location (central or peripheral), and the presence or absence of liver, brain, or bone metastases. To ensure consistent data collection, all the data were collected retrospectively by using uniform database templates. Tumor response was assessed according to Response Evaluation Criteria in Solid Tumors (RECIST) version 1.1. Progression free survival (PFS) and overall survival (OS) was defined as the time from the initiation of bevacizumab to the date of progression and the date of death or last follow-up, respectively.

All patients were dichotomized into “low” and “high” groups according to the inflammatory factors at basement. The cut-off values of baseline NLR, PLR, SII, and LMR were defined as 3.87, 156, 824, and 2.37, respectively, according to receiver operating characteristics (ROC) analysis. Univariate and multivariate Cox models were applied in OS and PFS analyses to assess the independent prognostic values among clinical factors and serum inflammatory factors. Variables with p<0.1 in univariate analyses were included in multivariate Cox models. Results were presented as hazard ratios (HR) with 95% confidence intervals (95% CIs). All p-values were two-sided, with statistical significance defined as p<0.05. Survival analyses and mixed effect models were conducted using SPSS 24 and figures were carried out using GraphPad Prism 7.

A total of 161 advanced non-squamous NSCLC patients treated with bevacizumab were enrolled in our study; and 74 patients were dead at the end of follow-up. Baseline characteristics are shown in Table 1.

All enrolled patients were divided into 'progression' and 'no progression' groups depending on the disease evaluation at the end of follow-up. The mixed effect regression analysis was then performed to compare the last 4 cycle changes in systemic inflammatory factors between both groups.

The independent risk inflammatory factors for PFS and OS were then further confirmed using Kaplan-Meier analyses, which showed the good capacity in prognostic prediction (Figure 3).

Antiangiogenetic therapy with bevacizumab has been proposed to play a critical role in the alleviation of immunosuppression in tumor microenvironments. [10, 11, 15] Serum inflammatory factors, representing the systemic immune status, were found to be associated with the density of immune cells in tumor tissues, reflecting immune status in tumor microenvironments. [17, 28] Thus, the dynamic evaluation of systemic inflammatory factors may be helpful for estimating immune status changes during bevacizumab treatment. Moreover, although baseline systemic inflammatory factors have been found to predict the prognosis of NSCLC patients, [21-26] the dynamic changes may be more valuable in reflecting the real-time response to bevacizumab and be more accurate for predicting the patients' prognosis.

Our present study found that serum NLR, PLR, and SII in patients with CR/PR decreased consistently, but increased in patients with PD during the first 6 cycles of bevacizumab treatment; while there was an elevation of LMR in patients with CR/PR and reduction in patients with PD. This association between changes of systemic inflammatory factors and clinical response could at least be partly explained. More lymphocytes and less neutrophils and monocytes will migrate into local tissues and improve the immunological environment, which will lead to the prevention of tumor growth. In contrast, the increased neutrophil and monocyte and decreased lymphocytes presented with higher NLR, PLR, SII, and lower LMR, were found to demonstrate the tumor progression during bevacizumab treatment. More neutrophils and macrophages (derived from monocytic precursors) may move to tumor microenvironments and promote angiogenesis, not only by releasing proangiogenic factors VEGF, but also by triggering VEGF-independent angiogenesis, ultimately rendering the resistance to bevacizumab. [15] [29-32] Moreover, the resistance to bevacizumab will aggravate anaerobic condition in the tumor tissues attracting more neutrophils and macrophages, which will form the positive feedback loop in impairing the immune status and promoting the tumor progression. 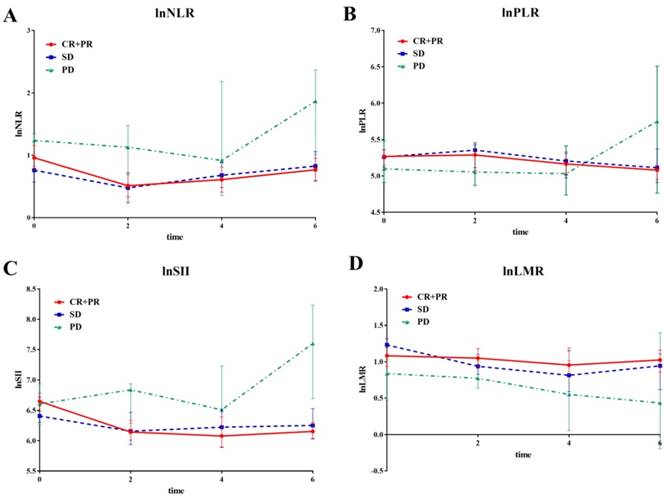 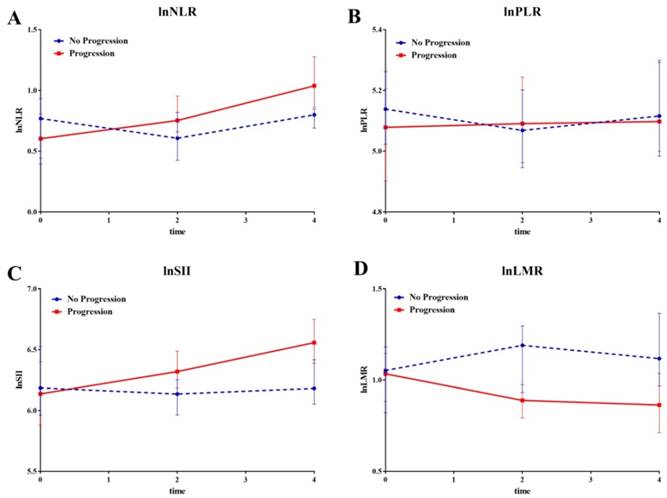 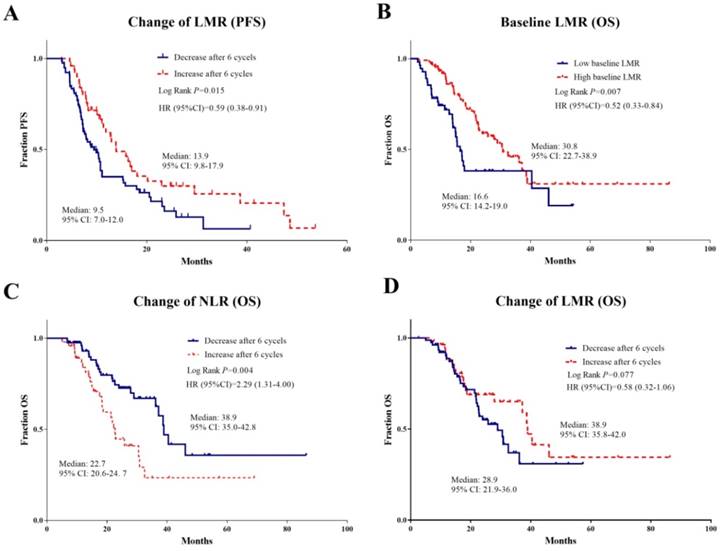 Although the relationship between the systemic inflammatory factors and tumor infiltrating immune cells was not directly confirmed in our study, due to the difficulty in repeated acquirement of tumor tissues, previous studies have provided the evidence of successfully assessing immunological status in tumor microenvironments using the systemic inflammatory factors.[16, 17] Nevertheless, we, for the first time, dynamically evaluated the kinetic changes of systemic inflammatory factors during bevacizumab treatment in NSCLC, and established the direct links between the changes of these factors and the tumor response. Activation of systemic immune status with the decline of serum NLR, PLR, and SII; and rise of serum LMR could indicate favorable response to bevacizumab, while the alteration to suppressive status indicate the resistance, which will serve as useful markers for the prediction of bevacizumab efficacy in an easy and non-invasive manner.

When the prognostic factors of these advanced NSCLC patients receiving bevacizumab treatment were analyzed, liver metastasis was found to independently predict both OS and PFS, consistent with previous studies.[33] Due to the liver's important function in nutrient metabolism and detoxification, it is not surprising that NSCLC patients with liver metastasis showed a significantly poor prognosis compared to other distant metastasis. In the field of systemic inflammatory factors, only baseline LMR was found to predict a worse OS consistent with the literature; [34] however, other baseline factors lost their prediction significance in multivariate analysis of PFS and OS. Notably, dynamic changes of factors, such as increase of NLR and decrease of LMR were independently associated with OS of NSCLC patients with bevacizumab treatment, demonstrating that the dynamic changes of immune status played a more important role in the prognosis prediction. Dysregulation of immune system may cause the disruption of systemic homeostasis leading to the resistance to anti-tumor therapy and progression of tumor. Thus, systemic inflammatory factors were recommended to be dynamically considered when estimating the patients' prognosis, and were helpful in further guidance of individualized treatment for advanced NSCLC patients.

As indicators of immune response, NLR and PLR have been studied in the prediction of treatment response and outcomes in NSCLC patients receiving checkpoint inhibitor; the study reveals that elevated baseline NLR and PLR were associated with lower response rate and shorter OS and PFS when treated with nivolumab.[35] Based on the preclinical findings, the immunosuppression induced by resistance of anti-angiogenesis might be settled by administration of immunotherapy. The survival benefit with respect to combination of atezolizumab and bevacizumab has been demonstrated in advanced NSCLC in IMpower150 clinical trial,[6] suggesting the promising role of combination treatment in improving the patient outcomes; several other clinical trials are ongoing.[36-38] Further studies are warranted to dynamically evaluate the predictive role of systemic inflammatory factors in the combination therapy. Nevertheless, we hope our results provide support for future studies examining the relationship between the changes of systemic immune status and the timepoint of combining bevacizumab and immunotherapy.

Our present study also has some limitations. First, the systemic inflammatory factors may be affected by other causes, such as bleeding and the use of steroids, which cannot be determined by a retrospective review. To eliminate confounding factors, patients with autoimmune diseases and active infections were excluded from our study. Second, high densities of CD4+ and CD8+ T cells in tumor tissues have been found to be favorable prognostic factors in NSCLC patients. However, we cannot analyze the specific subgroups of lymphocytes due to the retrospective nature. The role of specific subtypes of lymphocytes and inflammatory cytokines, such as interferon (IFN)-γ, IL-4 and IL-17, will be investigated in our further study. Lastly, the mechanisms underlying the influence of systemic inflammatory cells on the bevacizumab response still remain unclear; more work is urgently needed.