Radiotherapy of liver cancer can affect the level of autophagy in cells. Effective regulation of autophagy can increase the radiosensitivity of liver cancer cells [7,8]. Therefore, further study of the role of autophagy is of great significance for the treatment of liver cancer. Autophagy is a protein degradation pathway used by eukaryotic cells to remove intracellular damage, and maintain homeostasis, which plays an important role in the physiology and pathology of cells, especially in the development of malignant tumors. However, excessively upregulated autophagy can also cause autophagic cell death, also known as type II programmed cell death, which is a programmed cell death pathway different from apoptosis [9,10].

Therefore, based on our previous experimental results, this study was to observe the inhibitory effect of SSd and radiation alone and in combination on the growth of hepatoma cells, and to detect the changes of autophagy and related proteins. This study preliminarily explored the role of autophagy in SSd-mediated radiosensitivity of hepatoma cells, and provided experimental evidence for the treatment of liver cancer and the development of new drugs.

The cells were cultured in RPMI-1640 medium (PAA Laboratories GmbH, Austria) supplemented with 10% fetal bovine serum (FBS) in a humidified atmosphere containing 5% CO2 at 37°C. Cells were treated with radiation alone, SSd alone, or a combination of radiation and SSd, respectively. Radiation was performed at a dose of 2Gy (6 MV, and a dose rate of 400 cGy/min) by using an X-ray linear accelerator at room temperature. SSd was also administered at concentrations (3µg/ml) as described previously [13]. SSd was added to the cultures at 2 h before radiation. Chloroquine (CQ) (25 μmol/L) or mTOR inhibitor (MHY1485, 20nmol/L) was added 4 hours prior to radiation or ssd intervention. Control cultures received a carrier solvent consisting of 0.1% DMSO.

The experimental steps for detecting cell activity refer to our previous methods [14]. Cells were seeded in a 96-well plate (1×104 cells/well) and incubated at 37°C in 5% CO2 for different periods as desired. MTT solution was added and the cells were incubated for another 4 h. Supernatants were removed and formazan crystals were dissolved in 200 µl of DMSO. Optical density was determined at 490 nm by using a multi-microplate test system (POLARstar OPTIMA, BMG Labtechnologies, Germany). Relative cell viability: (average OD value of the intervention group / average OD value of the control group) × 100%.

The cells of each experimental group were treated in a 6-well plate, digested into single cell suspension by trypsinization, and 6-well plates were inoculated at a density of 200 cells per well, placed in a cell culture incubator for 10 days. The culture solution was immersed twice in PBS, fixed in 4% paraformaldehyde for 15 min, and immersed twice in PBS. The cells were stained with crystal violet for 20 min, washed slowly with tap water until they did not fade. After drying in a ventilated place, photographs were taken and the number of clones was counted,and the colonies with more than 50 cells were counted. The clonal formation rate = number of colonies in the intervention group / number of control colonies × 100%.

The autophagy in hepatocarcinoma cells of each experimental group was observed under transmission electron microscope. The cells of each experimental group were collected, digested with 2.5g/L trypsin, centrifuged at 3000 r/min, washed with PBS, collected in EP tubes, then fixed with 25 g/L glutaraldehyde, with 10 g/L citric acid, and dehydrated by graded ethanol, infiltrated and embedded in epoxy resin. After slicing by the ultra microtome, cells were stained by uranyl acetate and lead citrate, and observed under a transmission electron microscope.

Refer to our previous experimental methods [13]. Add about 100μl of RIPA lysate containing protease and phosphatase inhibitor per 1×106 cells, lyse on ice for 30 min. After the lysis, the cell lysate was placed in a centrifuge at 12000 g at 4°C, centrifuged for 30 min, and the supernatant was collected and quantified by BCA method. Finally, add 5×loading buffer, boil water for 10 min and then electrophoresis. The blots were probed with antibodies against LC3 (diluted 1:2000). Blot images were obtained from the FX5 spectral imaging system and the optical density of the bands was measured by Image J software (NIH, Bethesda, MD, USA).The membranes were re-probed for β-actin as loading control.

The 7721 cells were transfected with mRFP-GFP-LC3 plasmid according to the manufacturer's instructions. 24 h later, different conditions were intervened and autophagy was observed under laser confocal microscopy. The number of puncta in liver cancer cells was counted to evaluate the level of autophagy.

Quantitative data were presented as the mean ± standard error of the mean (SEM) and analyzed by one-way ANOVA. Statistical analyses were performed using SPSS software (version 17.0). Tukey's post hoc analyses were conducted to assess the difference between groups. Data were considered significant if P < 0.05.

Effects of SSd and radiation on hepatoma cell growth

As our previously described that the cell viabilities of SMMC-7721 cells were significantly reduced in a dose-dependent manner and time-dependent manner after treated with SSd, radiation, or a combination of SSd and radiation[13]. In this study, we further selected SSd (3μg/mL) and radiation (2 Gy) to act on SMMC-7721 or MHCC97L cells to study its effect on cell activity and autophagy levels. MTT demonstrated that radiation could inhibit the growth of SMMC-7721 cells and MHCC97L cells obviously, and in the combined group, SSd can further enhance the inhibitory effect of radiation on liver cancer cells. As shown in Figure 1. At different time points, differences of relative cell viability between the combined group and radiation group were statistically significant. After the addition of CQ or MHY1485, the radiosensitization effect of SSd on SMMC-7721 cells was significantly reduced. Relative cell viability increased from 70% to 80% or 77.8% in the combined group at 48 h after treatment. (Figure 1 A, P< 0.05). Similarly, the reduction in radiosensitization of SSd can also be observed in MHCC97L cells after the addition of CQ or MHY1485 (Figure 1 B, P< 0.05). In addition, we further studied the effect of SSd on the radiosensitivity of normal hepatocytes. The relative cell viability of normal hepatocytes was significantly lower than that of the control group after treated with 2 Gy radiation. Although 3μg/mL of SSd also had a certain inhibitory effect on normal hepatocytes, there was no significant difference compared with the control group, and this concentration of SSd has no significant enhancement in radiosensitivity to normal hepatocytes (Figure 1 C, P>0.05).

Formation of autophagy in Hepatoma Cells was observed under transmission electron microscope. Autophagosomes of SMMC-7721 cells in the combined treatment group increased in large quantities, as indicated by the red arrow. However, almost no autophagosomes appeared in MHY1485 groups (×16500).

Effect of SSd and radiation on cell colony formation

When cells were exposed to 2 Gy radiation alone, The clonal formation rate of SMMC-7721 cells was 76.1%. However, when SSd (3 μmol/L) was added, a more pronounced decrease of cell survival was observed in the combined treatment group than that of in radiation groups (Figure 2A, P<0.05). Meanwhile, it was found that the clonal formation rate of combined treatment group was increased from 56.4% to 72.8% after the intervention of CQ, and it was 71.2% after the intervention of MHY1485 (Figure 2A, P<0.05). In addition, similar cell clone formation interventions can also be observed in MHCC97L cells (Figure 2B). These results provided additional evidence that radiotherapy sensitization of SSd in SMMC-7721 cells or MHCC97L cells can be partially reversed by CQ or MHY1485.

Effect of SSd and radiation on LC3-II expression

As shown in Figure 4, the western blot analysis presented that radiation significantly increased LC3-II levels. Especially after the addition of SSd, LC3-II levels is further increased (P<0.05). This indicates that SSd can increase radiation-induced autophagy of SMMC-7721 hepatoma cells. In order to further clarify that the up-regulation of LC3-II protein is due to the induction of autophagy by SSd rather than the inhibition of autophagosome degradation, the trial uses a lysosomal inhibitor CQ to co-treat SMMC-7721 hepatoma cells with SSd. The results showed that the LC3-II level was further increased after adding CQ compared with the SSd group, indicating that the upregulation of LC3-II protein after treatment with SSd was due to its induction of autophagy rather than inhibiting the degradation of autophagosomes. 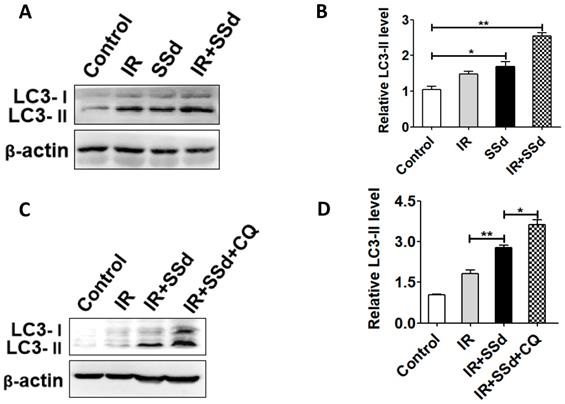 In order to further quantify the effect of the combination of SSd and radiation on the formation of autophagy in SMMC-7721 cells, this study further tested autophagosome formation by the mRFP-GFP-LC3 fluorescence method and the number of puncta in the cells reflects the activity of autophagy. Results indicated that the number of autophagosomes was 2.33±0.33 in the control group, 6.33±0.33 in the radiotherapy group, and there was a significant difference between the two groups (Figure 5, P<0.01). After the addition of SSd, the number of autophagosomes is as high as 14.67 ± 0.88, which is significantly higher than that of the radiation alone group (P< 0.01). The results show that SSd can significantly increase the autophagic formation of SMMC-7721 hepatoma cells induced by radiation (Figure 5).

Autophagy is a highly conserved evolutionary process that is ubiquitous in cells and is involved in the regulation of many important physiological and pathological processes. Studies have shown that autophagy has a dual role in tumor formation: in the early stage of tumors, autophagy inhibits the growth of tumor cells, cells clear the damaged organelles through autophagy, reduce inflammation, maintain cell homeostasis, and protect normal cell growth. In the advanced stage of tumors, autophagy is an important cause of radiation resistance and drug resistance in tumor cells and effective regulation of cellular autophagy can enhance the sensitivity of radiotherapy [16,17].

Recent studies have shown that saikosaponin-d has many pharmacological activities such as anti-tumor, induced autophagy, radiosensitization and immune regulation [13,14]. However, the effect of SSd on the level of autophagy in liver cancer cell radiotherapy has not reported. In this study, MTT and cell colony formation demonstrate that radiation could inhibit the growth of SMMC-7721 cells and MHCC97L cells obviously, and in the combination group, SSd can further enhance the inhibitory effect of radiation on liver cancer cells. Furthermore, under transmission electron microscope, the autophagy of SMMC-7721 in the combined group was significantly increased compared with the control or the radiation group. After the addition of the autophagy inhibitor chloroquine or MHY1485, the induced autophagy and radiosensitization effect of SSd on liver cancer cells were significantly reduced. 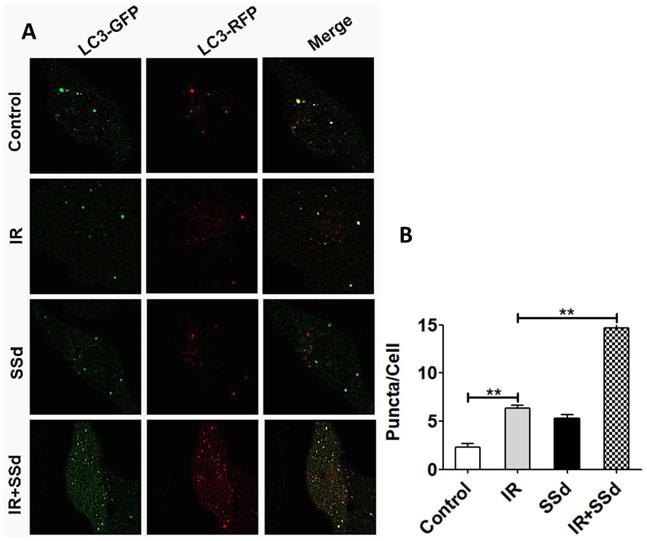 The mammalian target of rapamycin (mTOR) is an atypical serine/threonine protein kinase, which is the receptor for amino acids, ATP and hormones in cells. mTOR affects autophagy and has a gating effect in autophagy by causing changes in autophagy-related gene (ATG). Many oncogenes and tumor suppressor genes regulate cellular autophagy by acting on mTOR[20,21].This experiment indicates that SSd can promote the inhibition of radiation on hepatoma cell proliferation and clonal formation. However, this effect of SSd on radiation was reversed after the addition of the autophagy inhibitor chloroquine or mTOR agonist. These data indicate that inhibition of autophagy can reduce the radiosensitizing effect of SSd on hepatoma cells.

However, the current results are far from enough to understand the specific mechanism of SSd in the radiosensitization of liver cancer. Although many studies have shown that SSd can induce tumor cell apoptosis [22,23] and autophagic death mostly occurs in the absence of apoptosis [24]. Therefore, the inhibitory effect of SSd on tumors and whether there is an interaction between apoptosis and autophagy requires further research to confirmation. The occurrence and development of liver cancer is a complex process involving multiple signaling pathways. In-depth study of the sensitization effect of SSd on liver cancer radiotherapy may provide new ideas for drug therapy of liver cancer.

This study was supported by grants from Key Project of Shaanxi International Science and Technology Cooperation and Exchange Program (No. S2016YFKW0011) and the National Natural Science Foundation of China (No. 30973810; 81101696).

5. Sapisochin G, Barry A, Doherty M. et al. Stereotactic body radiotherapy vs. TACE or RFA as a bridge to transplant in patients with hepatocellular carcinoma. An intention-to-treat analysis. J Hepatol. 2017;67:92-99

16. Gewirtz DA. An autophagic switch in the response of tumor cells to radiation and chemotherapy. Biochem Pharmacol. 2014;90:208-11