Overexpression of AKR1B10 correlated with tumorigenesis of many human malignancies; however, the prognostic value of AKR1B10 expression in patients with hepatocellular carcinoma (HCC) still remains controversial. In this analysis, AKR1B10 expression in HCC tumors were evaluated in GEO, TCGA and Oncomine databases, and a survival analysis of AKR1B10 based on TCGA profile was performed. We found that AKR1B10 was significantly overexpressed in tumors compared with nontumors in 7 GEO series (GSE14520, GSE25097, GSE33006, GSE45436, GSE55092, GSE60502, GSE77314) and TCGA profile (all P < 0.05). Meta-analysis in Oncomine database revealed that AKR1B10 was significantly upregulated in cirrhosis, liver cell dysplasia and HCC compared with normal tissues (all P < 0.05). Kaplan-Meier analysis demonstrated that high AKR1B10 in tumors were significantly associated with worse overall survival (OS) in HCC patients (P < 0.05). Subgroup analysis showed that AKR1B10 overexpression were associated with poor 1-year, 3-year and 5-year OS (all P < 0.05). In addition, prognostic values of AKR1B10 upregulation for OS were more significant in HCC with hepatitis-virus-free (P = 0.00055), White race (P = 0.0029) and alcohol-free (P = 0.013), and both in male and female (P = 0.014 and P = 0.034, respectively). In conclusion: AKR1B10 was upregulated in tumors and correlated with worse OS in HCC patients.

Liver cancer, comprising 75%~85% cases of hepatocellular carcinoma (HCC), is predicted to be the sixth most commonly diagnosed cancer and the fourth leading cancer related deaths worldwide in 2018 [1-4]. In addition, the incidence of HCC will continue to rise over the next 10-20 years and to peak around 2030 based on a SEER registry projects study [3, 5]. There has been a marked increase in HCC related annual death rates during the past two decades [3]. Precise estimation of prognosis plays a critical role in treatment decision in HCC patients. Thus, to identify reliable prognostic biomarkers and to reveal HCC target for treatment is urgently required [6, 7].

Belongs to the aldo-keto reductase superfamily [8, 9], AKR1B10 is predominantly expressed in the small intestine, colon, liver, thymus and adrenal gland [8, 10]. Upregulation of AKR1B10 has been observed in various human malignancies, including non-small cell lung carcinoma [11], pancreatic cancer [12], breast cancer [13, 14], oral squamous cell carcinoma [15], nasopharyngeal carcinoma [16] and HCC [17, 18]. Conversely, underexpression of AKR1B10 has been observed in colon [19], gastric [20], endometrial cancer [21] and head and neck cancers [22]. However, AKR1B10 in HCC has been controversially discussed. Some researches revealed that negatively correlated with serum alpha-fetoprotein (AFP) level, high AKR1B10 expression was found to be a favorable factor of overall survival and disease-free survival in patients with hepatitis B virus-related HCC [23-25]. Another study found that high AKR1B10 expression was an independent risk factor for HCC development [26] and significantly correlated with liver damage[25]. Thus, to reevaluate the prognostic value of AKR1B10 in HCC patients is of great importance.

To help elucidate the possible relationship between AKR1B10 expression and HCC outcomes, we identified the AKR1B10 expression in GEO, Oncomine and TCGA databases and performed a survival analysis based on TCGA profile, in the hope of providing useful insights into hepatocarcinogenesis and aggressiveness.

Raw.CEL files of the microarray from each GEO dataset were normalized by quantile method of Robust Multichip Analysis (RMA) from R affy package [30]. Gene expression of AKR1B10 was performed by tumor and normal comparison from R Limma package [31]. Gene expression data of GSE77314 in XLSX form was downloaded from GEO dataset directly.

Associations between AKR1B10 and OS in HCC patients

Details of GEO series included in this analysis 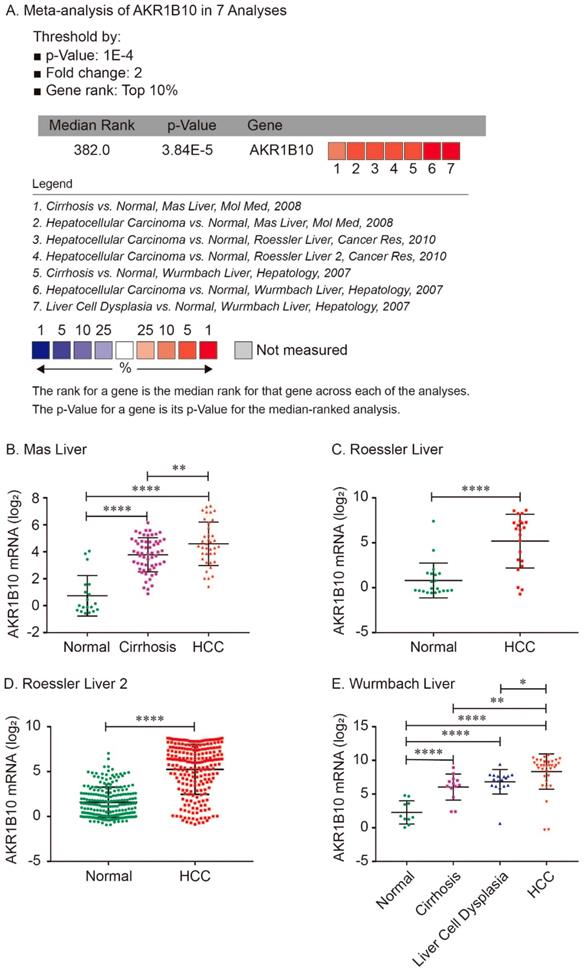 Association between AKR1B10 and clinico-pathological features in HCC patients 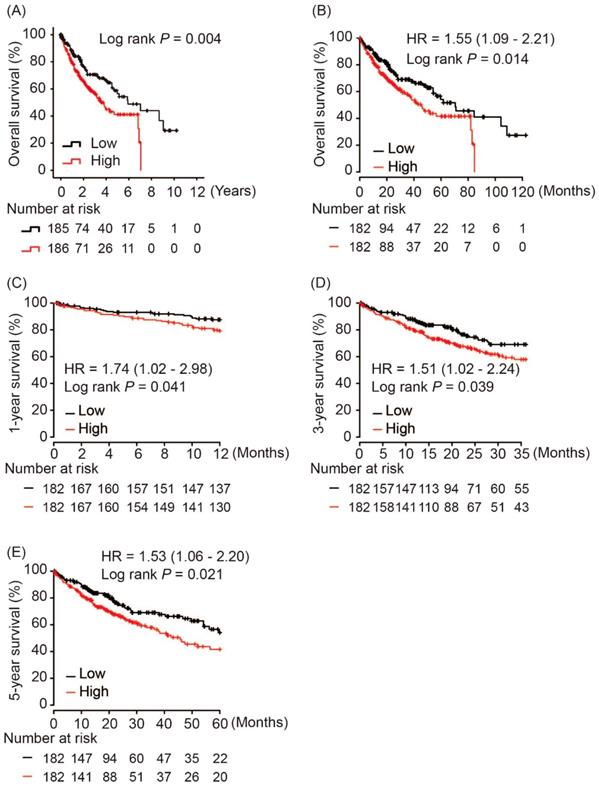 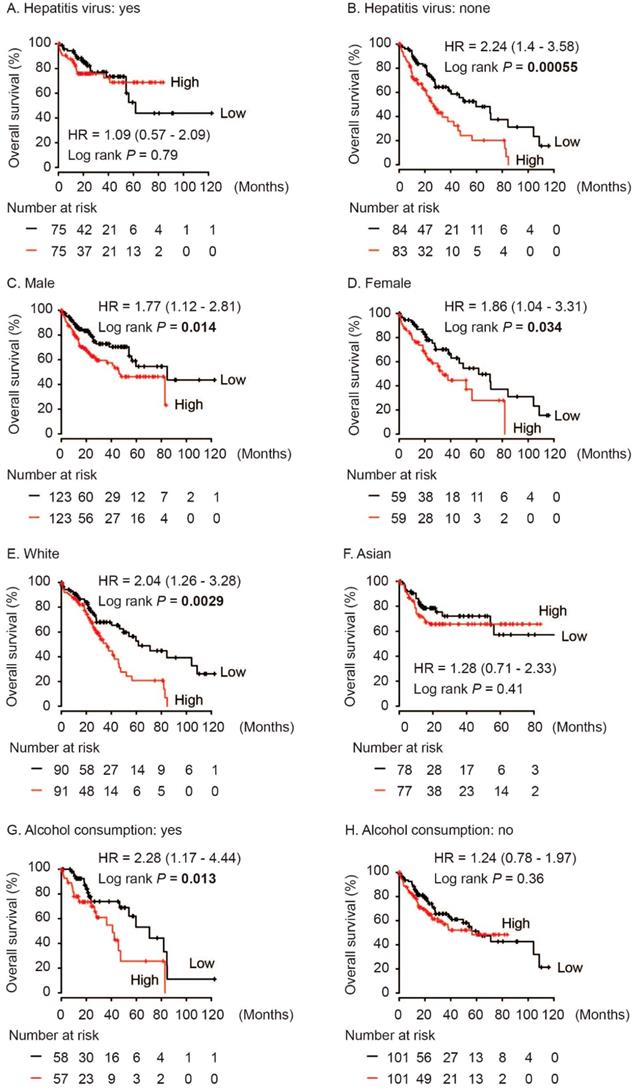 Overall survival of HCC patients grouped by AKR1B10 median in different grades (A, B, C) and stages (D, E, F). 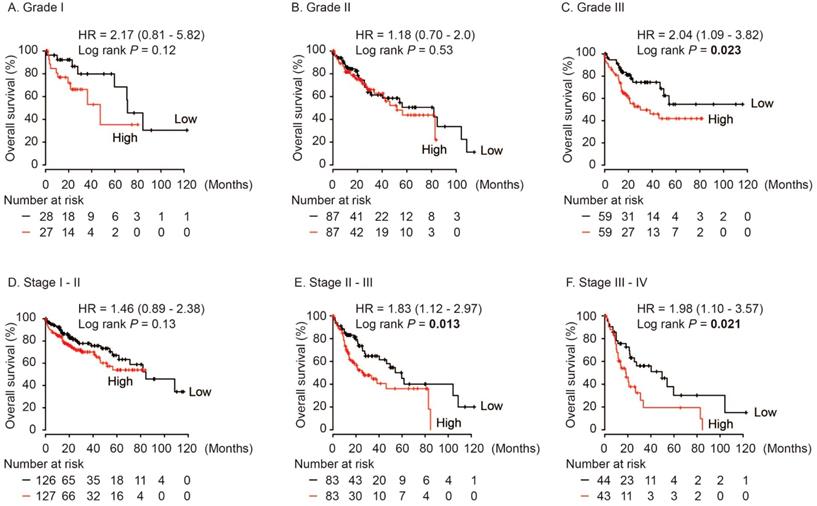 Characteristics of HCC patients between AKR1B10 high and low groups

Protein-protein interaction of AKR1B10 using String analysis (A); KEGG and GO biological process enrichment of its interactive genes (B) 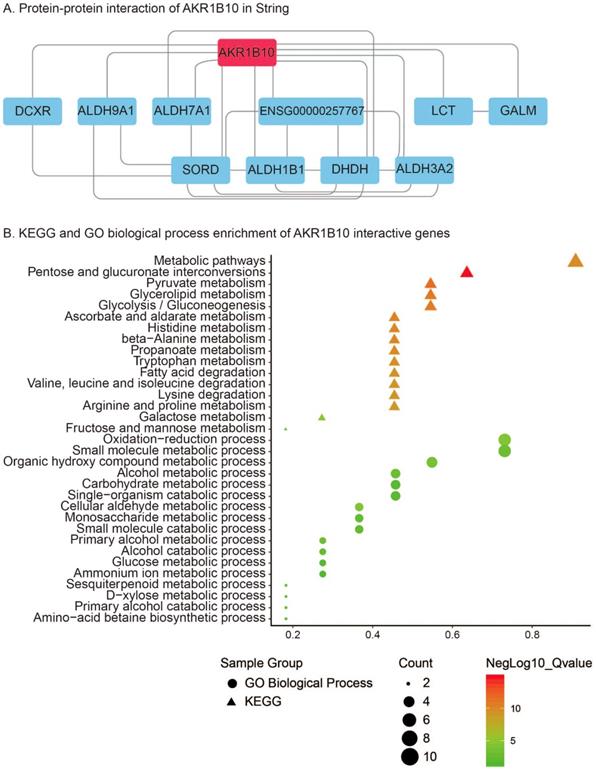 Over the past few years, new data have recently emerged that implicate AKR1B10 in tumor carcinogenesis in different systemic malignancies [35]. AKR1B10 is expressed at lower levels in normal liver[8, 10] and overexpressed in HCC tumors [22, 25]. Matkowskyj K et al reported that AKR1B10 was overexpressed in 97% of HCC, with minimal to no expression in adjacent hepatic tissue, while hepatic adenomas and focal nodular hyperplasia did not exhibit expression of AKR1B10 [17]. A small sample study demonstrated that increased expression of AKR1B10 in moderately-differentiated HCC compared with well-differentiated HCC, poorly-differentiated HCC, and liver cirrhosis [18]. Consistent with previous reports, we found that AKR1B10 was significantly upregulated in cirrhosis, liver cell dysplasia and HCC tumors compared with normal livers. Additionally, AKR1B10 was significantly higher in HCC tumor tissues than that in cirrhosis and in liver cell dysplasia. Hence, we assumed that AKR1B10 is emerging as a biomarker to distinguish hepatocellular carcinoma from benign liver lesions.

Functionally, AKR1B10 exerts a protective role through eliminating oxidative and carbonyl stresses and promoting epithelial proliferation for damage repair in inflammation. The KEGG pathway and GO biological process of AKR1B10 interactive genes in our study revealed that AKR1B10 should develop metabolic pathways and oxidation-reduction process. Unfortunately, we could not perform experimental research for probing potential oncogenic mechanisms of AKR1B10 in HCC development. And, no our own follow-up data of HCC patients were available. Considered the current controversial publications, we suggest a meta-analysis to evaluate the links between AKR1B10 and HCC prognosis. Even though, considered previous reports, we cautiously drew the hypothesis that AKR1B10 overexpression contributed to unfavorable prognosis in HCC patients.