Background: Gastrointestinal cancer is one of the most common neoplasms. Cytokeratin 18(CK18) is widely expressed in many different organs and cancers. Emerging data suggested conflicting results about the role of CK18 during carcinogenesis. The aim of this study is to systematically review the prognostic value of circulating CK18 (M65) and caspase-Cleaved CK18 (M30) in digestive cancers.

Materials and Methods: We searched major database for manuscripts reporting the effect of pretreatment CK18 on survival of digestive cancer patients. Revman5.3 and R were the software used for analysis. Pooled multivariable-adjusted hazard ratios (HR) for overall survival (OS) were calculated in all patients and many different subgroup analyses by stratifying on tumor type, metastasis stage, and ethnicity.

Conclusions: Non-invasive total and cleaved CK18 level detection by ELISA could be potentially a useful predictor of prognosis of digestive cancer patients. Further studies are warranted to investigate the molecular mechanisms of CK18.

Gastrointestinal cancer is one of the most common neoplasms in the world, accounting for nearly one third of total cancer cases. In developing countries, especially China, the incidence is even higher [1]. Because of its lack of clinical signs at early stages, many patients were diagnosed at advanced stages with poor prognosis. Nowadays, tumor, lymph node, and metastasis (TNM) staging system and histological subtype are the most globally recognized clinicopathological variables for standard treatment and prognostication of gastrointestinal cancer [2]. However, large variations in clinical outcomes have been observed in patients with the same staging and treatments [3-5]. It suggests that current tumor staging system failed to include enough prognostic information for prediction and requires further improvements. Several novel biomarkers have shown good supplements to the current staging system [6-8]. Many potential molecular predictors of prognosis, like cytokeratins, are controversial and need more investigation.

Cytokeratins are a conserved group of protein, which form cytoplasmic structure of epithelial cells and tissues. The expression pattern of cytokeratins is determined by different type of epithelial cells and differentiation. Cytokeratin 18 gene is located on chromosome 12q13, encoding a member of type 1 cytokeratins. Cytokeratin 18 is primarily expressed in single layer epithelial tissues. It binds with cytokeratin 9, a type two cytokeratin, to form heteropolymers in keratin filaments [9]. It is widely expressed in a large number of different organs and cancers that arise from these tissues, including liver, pancreas, gastrointestinal tract, lung, breast and kidney [10]. Cytokeratin 18 is involved in many cellular processes, such as apoptosis, mitosis, proliferation, cell cycle progression and responses to stresses [11-15]. Importantly, CK18 is cleaved by Caspase 2 protein at Asp 396 during apoptosis. It could be detected by M30 ELISA assay in plasma to reflect tumor cell apoptosis intensity [16]. On the other hand, M65 ELISA assay is used to determine the levels of both full-length CK18 protein and its fragments in plasma, monitoring both apoptosis and necrosis of tumor cells [16]. Previously, conflicting results has been reported about the role of CK18 during carcinogenesis. Thus, it is necessary to conduct a meta-analysis to systematically study the prognostic values of serum total and cleaved CK18 in digestive cancers.

This meta-analysis was conducted according to the recommendations of the Preferred Reporting Items for Systematic Reviews and Meta-analysis (PRISMA) guideline (Supplementary Table 1).

We searched English-written eligible manuscripts independently in PubMed Central, Scopus and Web of Science. The last search was performed on May 1st, 2019. We used the following keywords and their combination in the searching: “cancer” or “tumor” or Carcinoma" or "neoplasm" or “malignancy”, and “prognosis”, and “cytokeratin (CK) 18”, or “M30”, or “M65” from 2008 January to 2018 August. All eligible manuscripts and their references were retrieved for further analysis.

All English-written manuscripts are collected according to the following criteria: (1) all cancers, including gastric cancer, hepatocellular carcinoma (HCC), colorectal cancer, and pancreatic cancer, all patients were histopathological diagnosed; (2) each study detected the levels of CK18 prior to the surgery; (3) hazard ratios (HRs) with their 95% confidence interval (95% CI) of CK18 in patients were available in the studies; (4) only the most recent study was included if the same investigator publish multiple studies using the same dataset.

We used Revman5.3 (The Nordic Cochrane Centre, the Cochrane Collaboration, Copenhagen, Denmark) and R programing language to further analyze data. During the full-paper screening process, inter-reviewer agreement was estimated by Cohen's kappa statistic. The cohort-specific HRs and their 95% CI from Cox hazard models were extracted from each study. Subgroup analyses were also used to study how cancer stages, races, age, and sex would affect M30/ M65 predictive effect of cancer patients.

We used Begg's funnel plot in Revman5.3 and Egger's test in R to analyze the publication bias. The packages meta, metagen and metaphor in R were used in this study. Sensitivity test was also performed by omitting each study to find potential outliers in R. Statistical heterogeneity between studies was determined by Cochran's Q test and Higgins I square. P < 0.1 or I2 > 50% was considered as heterogeneity. When there was no statistically significant heterogeneity, we used a fixed-effect model to combine the data. Otherwise, we used a random-effects model. A two-sided P value less than 0.05 was considered statistically significant.

We had a total of 1596 publications in the initial literature search. 32 were included in the full-text screening after scanning the titles and abstracts. We reviewed the including papers carefully and 21 publications were excluded for duplications or insufficient data. Eventually, 11 publications were included in this meta-analysis. Cohen's kappa for inter-reviewer agreement was 0.78 for first-stage screening and 0.82 for second-stage full-text screening. Our literature search flow chart was shown as Figure 1. The quality of the 11 included publications was good with an average quality score of 6.8 and a median score of 7 (range 4-9, Supplementary Table 2).

Flow-diagram of this meta-analysis. 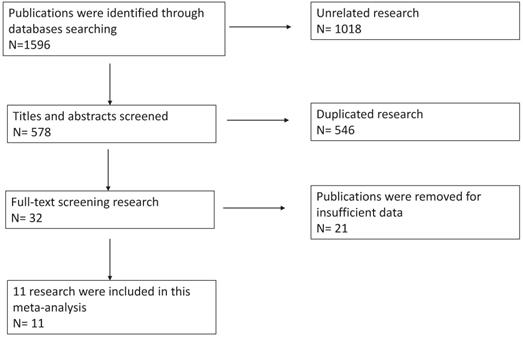 The main characteristics of 11 included studies. 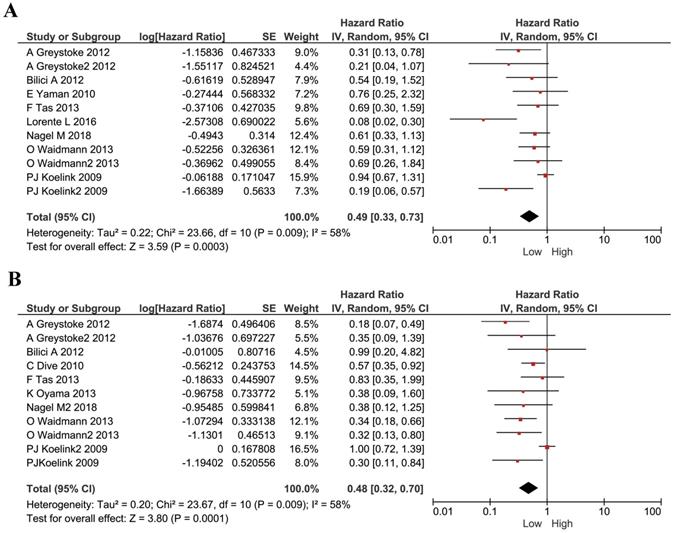 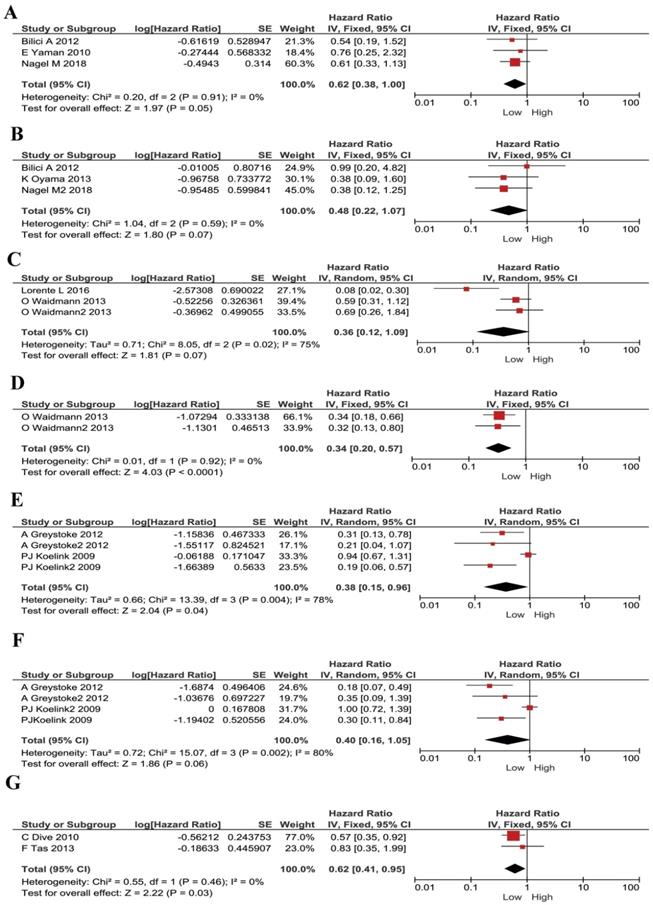 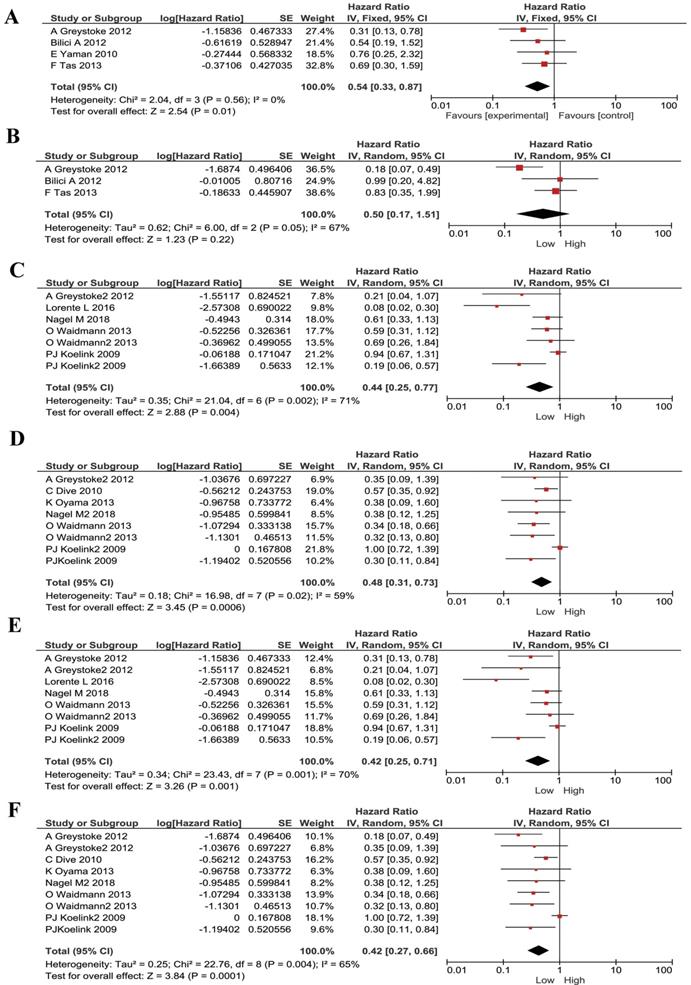 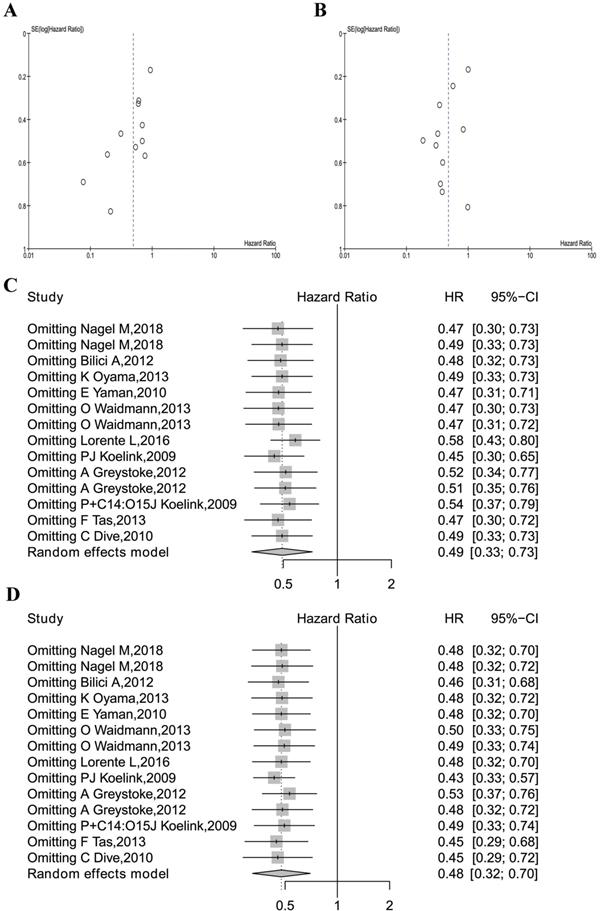 Begg's funnel test was used to estimate all the existing publication bias of the literature in this meta-analysis. As shown in Figure 5A, the shape of the funnel plots of overall M30 showed evidence of asymmetry, with an Egger's test bias -2.4402 (P = 0.0147). The funnel plot of M65 revealed evidence of publication bias, which was confirmed by Egger's test (z=-1.4575, P = 0.1450, Figure 5B).

Sensitivity analysis in R was used in this analysis by omitting one study at a time (also called “one-study removed” model). The observed M30 and M65 effects on overall survival were not significantly affected by removing any one of the studies included in this meta-analysis, as is shown in Figure 5C and Figure 5D.

In previous studies, CK18 expression has been found elevated in multiple types of cancers, so did them in serum [29-32]. Thus, the non-invasive detection of CK18 in serum provided a good method of cancer diagnosis, monitoring and prognosis prediction. However, many reports are either too small or short of prognosis information. Some of them only reported M65 or M30 and omitted the other one. In this paper, we evaluated both the prognostic value of M65 and M30 ELISA assay in four different types of digestive cancers. They were validated to be good biomarkers in digestive cancers with similar efficiency. Patients with relatively lower level of total and caspase cleaved CK18 were predicted to have better prognosis. This observation is consistent with reports from other types of cancers, including breast cancer, lung cancer and esophageal cancer [31, 33, 34]. However, results from immunohistochemistry staining of CK18 in breast cancer samples manifested reverse results [33]. In our study, we do not include IHC studies because of limited numbers of them. We only found one paper, showing consistent results as ours. Japanese scholars stated that CK18 expression detected by IHC correlated with poor differentiation, use of neo-adjuvant chemotherapy, advanced stage progression and poor prognosis of esophageal squamous cell carcinoma [29]. More studies are warranted.

With regards to the function of CK18 in tumor development and progression, it is still controversial. On one hand, accumulating evidence suggested that Ck18 is involved in PI3K/Akt, Wnt, and MAPK signaling pathways [35]. Zhang et al showed that local testicular heat treatment in adult monkeys activate ERK1/2 and Akt kinases with the expression of CK18 in Sertoli cells. After the blockage of ERK activation, CK18 expression was inhibited [36]. In pancreatic cancer cells, Ck18 correlated with chymotrypsin C levels and further promoted migration, which is consistent with our results [37]. On the other hand, opposite results are reported in breast cancer. The transfection of the CK18 gene into human breast cancer cells caused dramatic regression of their malignancy [38]. The biological function of Ck18 might vary in different type of cancers.

Despite the controversy over the biological function of Ck18, accumulating lines of evidence revealed its value in cancer diagnosis and prognosis. Differential pattern of expression might assist accurate pathological diagnosis. With immunohistochemistry, Chen et al found that expression of CK5/6, CK14, and CK17 proteins was increased in squamous cell carcinomas, while increased expression of CK7 and CK18 was observed in adenocarcinomas [39]. Furthermore, CK18, as an epithelial cell adhesion molecule, has been utilized as a biomarker in FDA approved circulating tumor cell detection technologies for breast and prostate cancers [40]. Although most digestive cancers are adenocarcinoma, levels of M65 and M30 increase as the consequences of cell killing chemotherapies. Doreen et al compared their values in gastrointestinal carcinomas patients before and after receiving chemotherapy. By examining the association of the value changes with clinical responses, they found that cancer patients with a partial response or stable disease revealed a significantly higher increase of cleaved CK-18 during chemotherapy as compared to those with progressive disease [32]. Similar results were observed by other scholars [41, 42].These studies showed that the detection of CK18 at different stages of gastrointestinal cancer treatment could serve as a good disease monitoring tool. As shown in our study, M30 and M65 predict poor prognosis in pooled analysis of digestive cancer patients with similar potencies. Also, little efficiency difference is found among different types of digestive cancers. In terms of metastasized or advanced tumors, only M30 showed statistical significance. Our results shed light on the clinical utility of CK18 in predicting cancer prognosis.

There are some limitations in our study. First, all studies used ELISA to detect CK18 expression and there are some limitations of ELISA. ELISA is a fast, scalable, and specific assay. However, the cut-off value is based on clinical statistics and it may not be correct for each individual, leading to false-positive or false-negative. Second, the number of included papers and patient for the meta-analysis is limited. It could be the cause of relatively high heterogeneity in this study. We thrive to include more publications. However, to retain to reliability of the study, we omitted several papers with duplicate patients or low qualities. In addition, CK18 is not a cancer specific biomarker, which is altered in other diseases, such as liver dysfunction, intracerebral hemorrhage and malignant middle cerebral artery infarction [43-45]. Finally, ethnicity imbalance is a pity of this study. The incidence rates of digestive cancers are highest in East Asian population, but most of the included patients are Caucasian. More Asian population-based studies are required to confirm our results.

In conclusion, the results of this study showed that non-invasive total and cleaved CK18 level detection by ELISA could be potentially a useful predictor of prognosis of digestive cancer patients.