Background: Lung adenocarcinoma (ADC) is the main cause of cancer-related mortality in lung cancer patients. DEAD/DEAH box helicase 11 (DDX11) was previously shown to be dysregulated and to exert oncogenic activity in cancer. However, the diagnostic value and clinical significance of DDX11 in ADC remain unknown.

Methods: A total of 513 ADC and 59 normal tissue samples were obtained from The Cancer Genome Atlas (TCGA) database, and the mRNA expression level of DDX11 in ADC was evaluated. Additionally, a meta-analysis of 7 ADC cohorts from the Gene Expression Omnibus (GEO) database was conducted to validate the DDX11 expression pattern. Moreover, receiver operating characteristic (ROC) curve analysis was used to identify the diagnostic power of DDX11 in ADC. A tissue microarray (TMA) comprising 86 ADC specimens and their adjacent normal specimens was applied to indicate DDX11 protein expression status. In addition, Kaplan-Meier and Cox regression analyses were conducted to validate the prognostic value of DDX11 in ADC. Finally, the molecular mechanism of DDX11 action in ADC was predicted by gene set enrichment analysis (GSEA).

Conclusion: DDX11 was significantly upregulated and predicted poor prognosis in ADC. This gene might serve as a potential novel prognostic and diagnostic biomarker for ADC.

Lung cancer is one of the main causes of cancer-associated mortality worldwide. This disease is subdivided into non-small cell lung cancer (NSCLC) and small cell lung cancer, with NSCLC accounting for approximately 80-85% of all lung cancers [1, 2]. Additionally, lung adenocarcinoma (ADC) is the most frequent subtype of NSCLC, accounting for approximately 40% of these cancers [3]. Although great advances have been made in the diagnosis and treatment of ADC, such as chemotherapy, immunotherapy and targeted therapy [4, 5], the 5-year overall survival (OS) rate of ADC patients with advanced stage is approximately 50%-70% due to the malignant features of high metastasis and recurrence [6, 7]. Therefore, powerful diagnostic and therapeutic strategies are still urgently needed to improve the prognosis of ADC patients.

The DDX11 (alias ChlR1) gene is located on human chromosome 12p11 and encodes an orthologue of the yeast gene Chl1, which is a member of the DEAD/DEAH box family of ATP-dependent helicases [8, 9]. DDX11 plays a significant role in the cohesion of chromosome arms and centromeres. Mitotic failure occurs due to replicated chromosomes failing to segregate after prometaphase arrest when DDX11 is depleted [10, 11]. Previous studies have proven that DDX11 biallelic mutations cause Warsaw breakage syndrome [12-14]. Additionally, a previous study suggested that the DDX11 expression level is high in melanomas and plays a key role in cancer progression [15]. However, until now, there have been no relevant studies focused on the expression and function of DDX11 in ADC.

The findings of our study indicated that the DDX11 expression level was significantly higher in ADC tissues than in adjacent normal tissues. Then, we observed that high DDX11 expression was associated with poor prognosis. Further, receiver operating characteristic (ROC) curve and meta-analysis showed a reliable diagnostic value for DDX11 in ADC patients. The expression of DDX11 was crucially correlated with the cell cycle G1-S phase and the DNA replication pathway. In summary, our results indicated that DDX11 might be a promising diagnostic and prognostic biomarker for ADC.

The data for 513 ADC and 59 normal tissue samples from The Cancer Genome Atlas (TCGA, https://tcga-data.nci.nih.gov/tcga/) database were downloaded for gene expression analyses and survival analyses. A total of 500 of the 513 ADC patients with follow-up survival time information were divided into higher and lower DDX11 expression groups by using X-tile, a recently developed tool for the evaluation of biological relevance between a biomarker and the patient outcome, and the discovery of population cut-points based on marker expression [16]. The survival analysis was conducted using the Kaplan-Meier method and a log-rank test. The raw data were analysed by BRB-array tools as previously reporte [17, 18].

Seven ADC datasets accompanied with scientific publications (GSE27262, GSE30219, GSE31210, GSE33532, GSE30219, GSE7670, and GSE10072) were gathered through the GEO database (http://www.ncbi.nlm.nih.gov/geo/, Gene Expression Omnibus). Then, we used meta-analysis to evaluate the diagnostic value of DDX11. The characteristics of the datasets, such as Cohort ID, RNAseq platforms, number of samples (tumour and non-tumour samples), publication year and country, are presented in Table S1.

A microarray of 86 ADC tumour and adjacent normal tissue samples, which was constructed utilizing a core diameter of 1.5 mm, was obtained from a commercial tissue microarray analysis (TMA) company (Shanghai OutdoBiotech, China). All experiments were approved by the Ethics Committee of the First Affiliated Hospital of Zhengzhou University, Zhengzhou, China.

GSEA was used to confirm the distribution of the individual genes of TCGA ADC datasets. The expression profiles of 513 samples from TCGA database were divided into two groups according to gene expression. GSEA v2.0 was then performed to verify whether the gene sets from the MSigDB database v4.0 are positively related to the expression of DDX11. The statistical significance threshold was set at P < 0.05.

Statistics for the meta-analysis

A meta-analysis was carried out to examine the pooled diagnostic power of DDX11 with the data from the GEO database using Stata software. We assessed heterogeneity among studies using I2 statistics. When I2 >50%, significant heterogeneity would be considered, and a random model would be performed for the meta-analysis. The subgroup analysis was carried out according to the following factors: region, sample size and publication year. Begg's test and Egger's test were used to determine the bias of the publications.

IHC was performed as previously reported [19, 20]. Briefly, 5 μm thick TMA sections were deparaffinized and then treated with hydrogen peroxide to quench endogenous peroxidase activity. Subsequently, the sections were incubated overnight with a rabbit anti-human DDX11 antibody (1:200, Abcam, USA) at 4℃. Then, the immunoreactive cells were detected by Signal Stain® DAB (CST, USA) and counterstained with Haematoxylin QS (Vector Laboratories). Two experienced pathologists, who were blinded to the clinicopathological data, separately evaluated the immunostaining samples, and the samples were scored according to the proportion of positive cells as follows: 1, <25%; 2, 25%-50%; 3, 51%-75%; and 4, 76%-100%. The staining intensity was scored as follows: 0, no staining; 1+, weak staining; 2+, moderate staining; 3+, strong staining; and 4+, and intense staining. The multiply of the two sub scores (range 0-16) was classified low expression (range 0-8) and high expression (range 8-16), respectively for statistical analysis.

All statistical analyses were performed using GraphPad Prism software (version 7.0, GraphPad Software, Inc., La Jolla, CA, USA) and SPSS software (version 23.0, SPSS Inc., Chicago, IL). A chi-squared test was used to examine the correlation between DDX11 expression levels and the clinicopathological parameters. Kaplan-Meier curves were utilized to analyse the OS of ADC patients. Cox regression analysis of univariate and multivariate variables was used to indicate the relationship between the different variables and survival. ROC curves were utilized to examine the pooled diagnostic power of DDX11 in ADC. Heatmaps were used to show the patterns of mRNA expression according to tumour-node-metastasis (TNM) and histological type. Pearson's correlation was performed to ascertain the linear correlation between 2 variables. P<0.05 is regarded as statistically significant. All data are presented as the means ± SD. All experiments were carried out at least three times.

DDX11 mRNA is upregulated and correlated with poor prognosis in ADC

To investigate the expression of DDX11 in cancers, TCGA data analysis was conducted to identify DDX11 mRNA expression levels. The results demonstrated that DDX11 mRNA was highly expressed in numerous tumour samples compared with its expression in non-tumour tissues (Figure 1A). Consistently, DDX11 is upregulated in tumour tissues of ADC (Figure 1B). Moreover, survival analysis revealed that the high expression of DDX11 could predict poorer overall survival (OS) (Figure 1C). Taken together, these results indicate that DDX11 might be a novel prognostic biomarker for ADC patients. 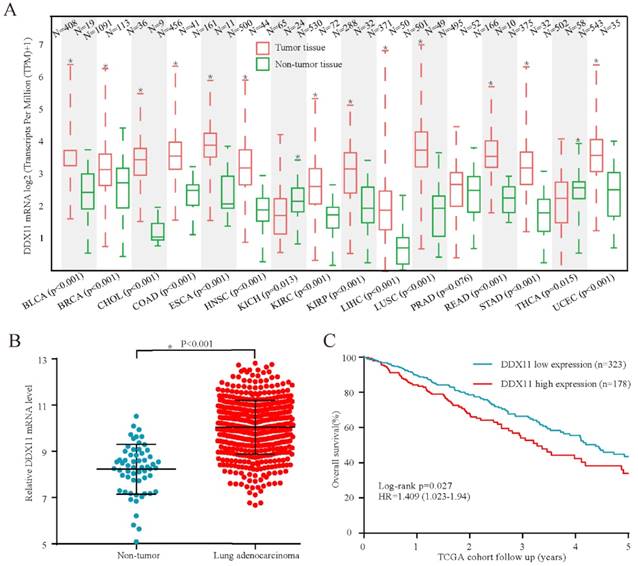 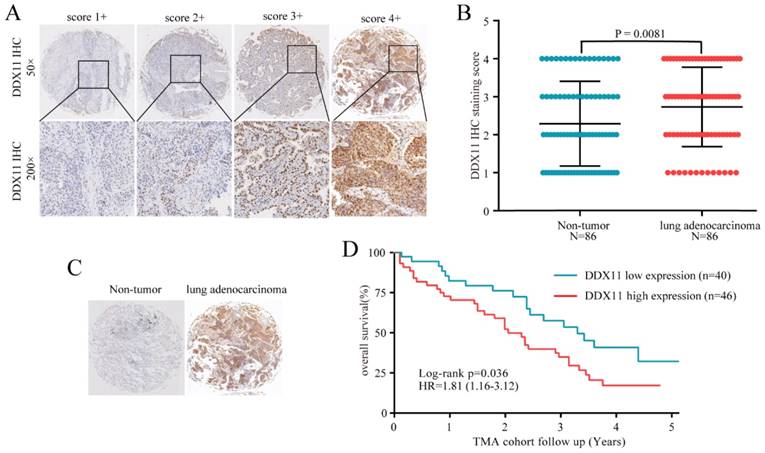 Subsequently, considering the expression difference in mRNA, we performed immunohistochemistry to evaluate the DDX11 protein expression status in ADC. According to the staining intensity, DDX11 staining was scored from 1+ to 4+ (Figure 2A). A score of 1+ to 2+ was defined as low DDX11 expression, whereas a score of 3+ to 4+ was defined as high DDX11 expression. Consistent with the results of TCGA and GEO database analyses, the expression levels of DDX11 protein were significantly upregulated in ADC tissues (Figure 2B). Furthermore, DDX11 expression was significantly positively related to tumour size and the TNM stage of the patients (Table 1). Additionally, Kaplan-Meier analysis indicated that high expression of DDX11 was remarkably correlated with poor OS in ADC patients (P = 0.036, Figure 2D). Moreover, univariate and multivariate analyses demonstrated that, in addition to the TNM stage, DDX11 might be an independent prognostic factor for ADC patients (Table 2). In summary, these findings strongly suggested that DDX11 might serve as a prognostic biomarker in ADC. 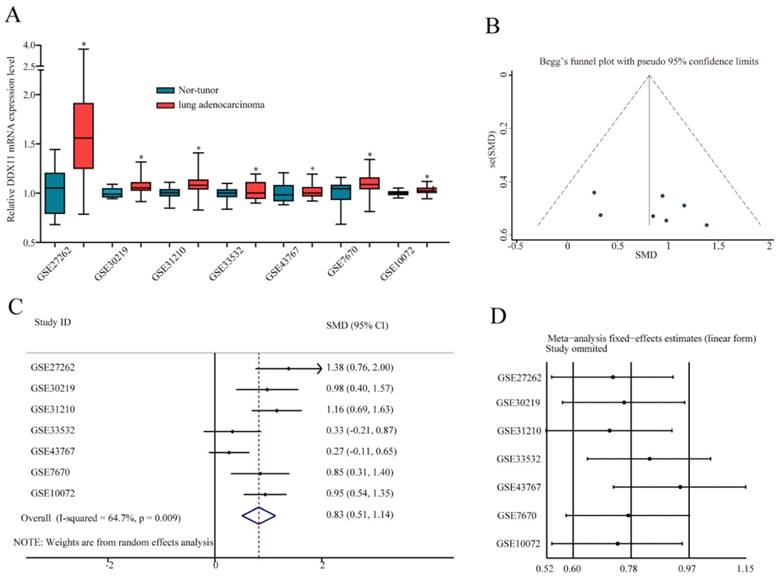 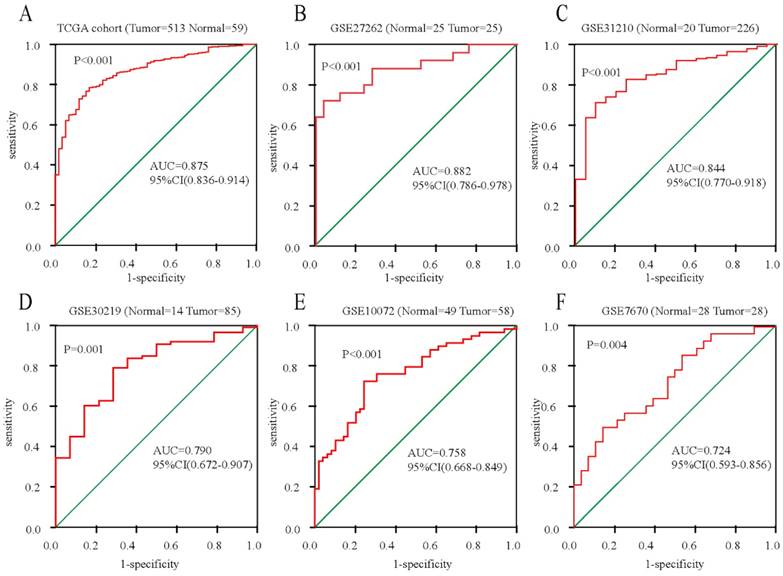 The potential molecular mechanism mediated by DDX11 in ADC

ADC accounts for almost 50% of lung cancers, and although the diagnostic and therapeutic techniques for ADC have made significant progress, the 5-year OS for ADC patients remains poor [21]. Therefore, it is of vital importance to elucidate the molecular mechanisms of ADC development and identify novel prognostic biomarkers and therapeutic targets for ADC. A few proteins, including HMGA1 [22], IDH1 [23], CEA and CYFRA [24], have been reported to be differentially expressed in ADC and associated with ADC progression.

DDX11, a DNA-dependent ATPase and helicase, is involved in the processing of the lagging strand during DNA replication and in the maintenance of the fork structure for the establishment of cohesion [25, 26]. Recent studies have shown an oncogenic function for DDX11 in a few cancers. For example, Bhattacharya et al. reported that high DDX11 expression was significantly related to poor prognosis in advanced melanomas. However, its functional role and clinical significance in ADC have never been reported. In this study, we consistently found high DDX11 expression in ADC tissues by TCGA, GEO database and Zhengzhou University (ZZU) ADC cohort analyses. DDX11 overexpression was significantly correlated with the OS rate. Furthermore, univariate and multivariate analyses indicated that DDX11 expression might be an independent prognostic element in ADC. These results showed that DDX11 could serve as a promising biomarker for prognostic prediction in ADC. 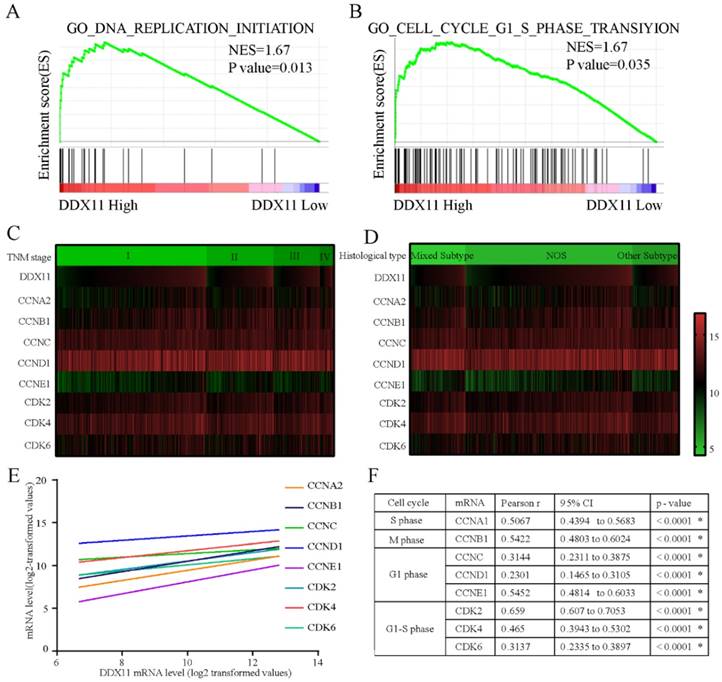 We further investigated the underlying mechanism of DDX11 in promoting ADC tumorigenesis. Bioinformatic analysis indicated that high DDX11 expression was closely linked to DNA replication and the cell cycle G1-S phase transition. Numerous studies have confirmed that the cell cycle is a complex and strictly controlled process [27] that is frequently dysregulated in tumorigenesis, including ADC [28, 29]. Furthermore, previous studies have reported that several proteins, such as FGF[30], ERBB3 [31] and MFN2 [32], may influence lung cancer progression through cell cycle pathways, Consistently, studies by Bhattacharya C et al. have demonstrated a key role for DDX11 in the proliferation and cell cycle progression of advanced melanoma. In addition, our present study found that DDX11 expression was positively associated with CCNA2, CCNB1, CCNC, CCND1, CCNE1, CDK2, CDK4 and CDK6, which are involved in the cell cycle and DNA replication [33-36]. These results suggested that DDX11 might play a significant role in regulating the cell cycle G1-S phase transition and DNA replication in ADC progression.

Our findings provide the first evidence that DDX11 is overexpressed in ADC and has a close correlation with cancer progression, and the performance of DDX11 in predicting a poor prognosis in ADC is also satisfactory. Taken together, these findings suggest that DDX11 might be a potential prognostic and diagnostic biomarker for patients with ADC.

This study was supported by funds from the National Natural Science Foundation of China (81702346) and the Medicine, Science and Technology research project of Henan Province (201602032). The funding body had no role in the design of the study, the collection, analysis, and interpretation of the data, or the writing of the manuscript.

6. Sawabata N. Prognosis of lung cancer patients in Japan according to data from the Japanese Joint Committee of Lung Cancer Registry. Respir Investig. 2014;52:317-21