Objectives: Lung cancer in young adults is a distinct disease with particular socioeconomic implications. This study aimed to clarify the clinicopathological characteristics, best interventions, and outcomes of this distinctive entity.

Methods: A retrospective review of patients with lung cancer was performed in our institute from January 2010 to June 2017. Young adults were defined as between 18 and 35 years old. Demographic, clinicopathological, therapeutic, and prognostic data were systematically analyzed.

Results: From a total of 8734 patients, 120 (1.37%) were young adults, of which 82 with complete hospital records were included in this study. A high proportion had adenocarcinoma (45%) and late-stage disease (49.21% stage IV at diagnosis). Pleura (38.71%) were the most common metastatic site, followed by bone (35.48%) and lung (25.81%). The majority (68%) had single organ metastasis. Young patients had an increased frequency of gene mutations. Among the 18 patients for whom epidermal growth factor receptor (EGFR) and anaplastic lymphoma kinase (ALK) status was determined, 10 had sensitive EGFR mutations while 5 had ALK rearrangement; only 3 patients were driver gene mutation-negative. The 1-year overall survival (OS) rate was 62.31% and the 3- and 5-year survival rates were both 53.31%; median OS was not achieved (range, 3-86 months). Male sex, negative or unknown gene mutation status, stage IV, and squamous or small cell lung cancer were associated with poor prognosis (OS) in early-onset lung cancer.

Conclusions: Lung cancer in young adults is distinctive, with adenocarcinoma and stage IV at presentation being predominant characteristics. Gene mutation assessment should be mandatory in this subgroup due to the increased likelihood of positive driver gene alterations, as individualized targeted therapy may achieve superior outcomes.

Lung cancer is the leading cause of mortality worldwide. In China, both incidence and mortality from lung cancer continue to increase sharply [1], posing a serious threat to public health. In 2015, lung cancer had the highest mortality rate (standardized mortality rate, 39.81/100,000) of any cancer in China [2]. Notably, research from Europe and Japan has shown a trend of increasing incidence of lung cancer in young adults [3, 4] and there is a pressing need to characterize the disease in this subgroup because of its distinct biological behavior, previous limited study, and particular socioeconomic implications. Previously, the cut-off age for early-onset lung cancer has ranged from 40 to 50 years [5]. Our study is the first to date to explore this distinctive disease in patients aged 18-35 years. Our overview will help to expand understanding of this unique subgroup of lung cancer and provide meaningful information to guide its optimal treatment and improve prognosis.

From January 2010 to June 2017, 8734 patients with lung cancer confirmed by pathological examination of either resection or biopsy samples in the First Hospital, Jilin University were reviewed. Among them, 120 adults aged 18-35 years were eligible for this study; however, 38 patients diagnosed in the outpatient service were excluded because of a lack of treatment records. Finally, 82 patients were included in this retrospective study. The following data were retrieved: age; sex; family history; personal history (including smoking and alcohol consumption); pathological tumor type; tumor location; tumor stage; gene mutation assessment; interventions, including surgery, chemotherapy, radiotherapy, and targeted management; and overall survival (OS). OS was defined as the interval from diagnosis to death or latest follow-up. The end date for last follow-up was April 30, 2018.

This study was approved by the Ethics Committee of the First Hospital of Jilin University.

Lung cancer is exceedingly rare in young individuals, with an incidence of 1.37% (120/8734) in our registry, which was similar in both sexes (M:F ratio, 1.16:1), unlike some previous reports of higher rates in females than males [1]. The mean age at diagnosis was 31.39 years. The “31-35 years” age group comprised 69.51% of all enrolled patients, with the “20-30 years” age group making up 28.05%. Only two patients were 18 years old at diagnosis. Family history was unremarkable in 98.68% of patients. Fifty-eight patients (71.60%) stated that they did not smoke while 23 had a history of smoking, among which 6 were heavy smokers, with ≥ 15 years of smoking history. Most patients (91.36%) had no history of alcohol consumption. Regarding primary site, there was no predilection for either the left or right lung (L:R ratio, 0.82:1). Notably, nearly half of patients (49.21%) with records of tumor stage were recorded as having metastatic disease at diagnosis (Table 1).

Among metastatic sites, pleura were the most common. Of early-onset stage IV lung cancer patients, 38.71% suffered from malignant pleural effusion at presentation. Bone was the second most common metastatic site (35.48%), followed by lung and liver (25.81% and 12.90%, respectively) (Table 2). Furthermore, 68% of patients with stage IV early-onset lung cancer at diagnosis had single organ involvement (i.e., oligometastasis), indicating that aggressive local and systemic management could contribute to better outcomes for such patients (Figure 1). 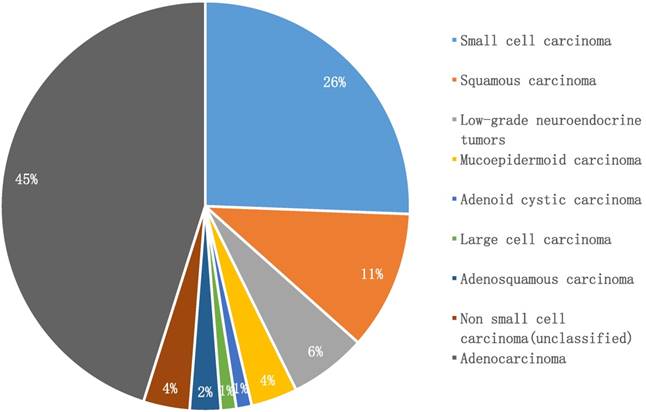 A total of 53 patients had clear genetic status records, while genetic testing was not performed for 35 patients during hospitalization. Among 18 patients examined for epidermal growth factor receptor (EGFR) and Anaplastic lymphoma kinase (ALK) mutations, 15 were positive for mutations of these driver genes; 10 had sensitive EGFR mutations, while 5 patients had clear ALK rearrangement. Only three patients were driver gene mutation-negative (Table 3).

Surgery was conducted for 47.89% of patients. Of 59 patients with radiotherapy records, 15 had undergone radiation treatment, among which nine underwent thoracic radiotherapy, four cranial irradiation, and two were treated with radiation targeting both thoracic and cranial sites. Chemotherapy was administered to 68.33% of patients and 14 patients received targeted drug therapy, 9 and 5 of which were administered EGFR and ALK TKIs, respectively (Table 4). More than one treatment modality (surgery, radiotherapy, chemotherapy, and targeted therapy) was applied in 41.79% (28/67) of patients. 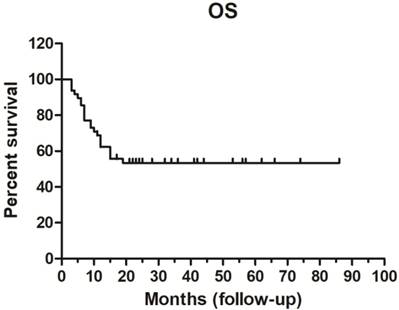 Sex was strongly associated with OS. Female OS (median, undefined) was superior to that of males (median OS, 13.5 months; p < 0.05). Patients clearly positive for driver gene mutations, such as TKI-sensitive EGFR mutations or ALK rearrangements had superior OS compare with those with negative or unknown driver gene mutation status; the latter had a median OS of only 15 months. Stage was another important prognostic factor for OS. Unsurprisingly, patients with stage IV disease had much shorter OS than those with stage 0-III (p < 0.01); median OS was only 10 months for patients with stage IV disease (Table 5; Figure 4).

With rapid increases in the morbidity and mortality attributable to lung cancer globally, research on lung cancer in young patients is attracting considerable attention; however, previous data is scant and discordant. The definition of young with regard to lung cancer is uncertain, and generally ranges from 40-50 years [1, 5-12]. To the best of our knowledge, our study is the first to focus on much younger patients with lung cancer (aged 18-35 years), with the aim of discovering traits specifically associated with lung cancer in the young.

The incidence of early-onset lung cancer differs according to geographical region and over time. In our cohort, the incidence of lung cancer in the young population (aged 18-35 years) was 1.37%, which is similar to the rate of 1.84% reported previously in patients aged 20-45 years from Beijing, China [1]. Rich et al. reported that young adults (18-39 years) accounted for 0.5% of non-small cell lung cancer (NSCLC) in the UK from 2004-2011 [6], and Subramanian et al. detected an incidence rate of 1.16% in a young population (18-40 years) in the USA, using data from the Surveillance, Epidemiology, and End Results (SEER) database [7]. Zhang et al. reported that early-onset NSCLC cancer accounted for 5.27% of lung cancer among patients aged 15-45 years, based on data from 175 qualified hospitals in the greater Shanghai area [8].

We found that only 1.32% patients had a family history of lung cancer, while 28.40% were former or current smokers, which is much lower than the 26.7% and 72.4%, respectively, previously reported by Li et al. [1], who found that smoking and family history of lung cancer were risk factors for early-onset lung cancer; however, analysis of the demographic data collected in our study failed to identify clear correlations with these factors. 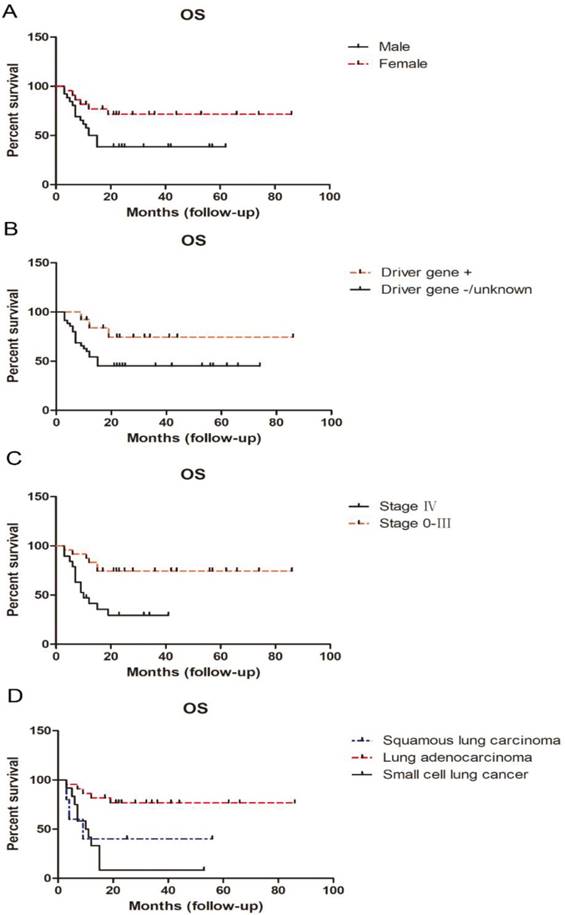 Our retrospective study demonstrated that male sex, lack of detection of driver gene mutation, stage IV disease, and squamous carcinoma or small cell lung cancer pathological type, predicted dismal outcomes, in terms of OS; however, no significant difference in survival rate was found by Li et al. according to patient sex or pathological tumor type [1]. These results appear to be conflicting and suggest that there is considerable heterogeneity among young adults with lung cancer. Large scale, multicentric, or even national, data is urgently required to fully explore the features, best interventions, and prognosis of early-onset lung cancer.

Remarkably, almost half (49.21%) of the cohort for whom tumor stage was recorded had metastatic disease, which is similar to previous reports; for example, metastasis was detected in 58% and 36% of patients with early onset lung cancer by Subramanian et al. [7] and Rich et al. [6], respectively. On further investigation, 68% of patients with metastases had single organ involvement, namely oligometastasis; the term “oligometastasis” was first introduced by Hellman and Weichselbaum in 1995 [13], and is generally considered a status between local and disseminated disease. Even when the same intervention strategy is applied, the number of metastatic foci determines patient prognosis to a considerable extent [14-16]. Despite the late-stage at presentation, the young patients in our study had a 5-year survival rate of 53.31%, which was higher than that documented by Duan et al. (31%) in 2013 [17]. This phenomenon can be partly explained by the fact that a clear majority of patients had oligometastases, as described above. Additionally, young patients generally have good performance status and few physical morbidities, making it feasible for them to endure multiple aggressive treatment modalities. In our cohort, 41.79% patients underwent ≥ 2 modalities of management, including surgery, radiotherapy, chemotherapy, and targeted therapy. Multiple treatments, with the aim of maximizing cancer control with tolerable side effects, will ultimately translate into survival benefits.

The cause of lung cancer in the young is a current research hotspot. Pan et al. conducted an analysis of patients with NSCLC aged ≤ 40 years and found that frequent genomic alterations occur in this subset; 40% (29/73) of patients with adenocarcinoma harbored EGFR mutations and 34% (25/74) had ALK rearrangements [18]. Another investigation revealed that, in patients aged ≤ 50 years, a high proportion (59%) had a targetable genotype [19]. Hou et al. found that, in patients with lung adenocarcinoma aged ≤ 45 years, there was a higher frequency of human epidermal growth factor receptor 2 (HER2) and ALK genetic alterations, with concurrent EGFR/TP53 mutations, but a lower prevalence of mutations of EGFR exon 20, KRAS, and serine/threonine kinase 11 (STK11), relative to patients aged > 45 years old [20]. In our study, only 18 patients had been screened for EGFR and ALK mutation status and 55.56% (10/18) harbored TKI-sensitive EGFR mutations, while 27.78% (5/18) had ALK rearrangements. Despite the small sample size for genetic testing, these data suggest a high mutation rate in young patients with lung cancer. These distinct genomics profile in early-onset lung cancer have fundamental implications for practice. We propose that next-generation sequencing should be conducted for these specific patients to guide personalized management. For driver gene mutation-positive lung cancer patients, specific targeted drugs are critical for disease control and outcome [21-25].

Our study has several limitations. First, it was a single-center retrospective investigation. Further, a relatively small proportion of our patients underwent genetic assessment. In the future, larger-scale and deeper investigation of this topic will be initiated.

Lung cancer in the young population is a distinct entity that predominantly presents as adenocarcinoma, with late-stage at onset, and a higher frequency of gene alteration, relative to older patients. Male sex, lack of driver gene mutation, stage IV disease, and squamous carcinoma or small cell lung cancer pathological types are associated with dismal outcomes in young adults. Genetic assessment is imperative for clinical management of this subgroup, to determine driver gene mutation status and guide application of targeted therapies. Despite the frequency of late-stage disease at diagnosis in young patients, the higher proportion of oligometastasis in this group highlights the importance of intensive treatment for improving patient prognosis. Our study is the first to focus on much younger patients with lung cancer (aged 18-35 years). To overcome the limitations of retrospective research and the considerable heterogeneity of patients with early-onset lung cancer, multi-center, or even national, databases should be established to identify the properties and optimal treatment paradigms for this unique entity in the near future.

This study was supported by a research program from the National Natural Science Foundation of China (grant no. 81602659).