Objective: As a member of the N-myc downregulated gene family, N-Myc downstream-regulated gene 2 (NDRG2) contributes to tumorigenesis of various types of cancer. The expression status of NDRG2 in colorectal cancer (CRC) and its prognostic value remain to be elucidated. The goal of this study was to determine the expression pattern of NDRG2 in human CRC and its association of NDRG2 expression with prognosis.

Conclusions: Low expression of NDRG2 was associated with unfavorable prognosis in CRC patients with primary tumor resection. Detection of NDRG2 expression might be useful for providing valuable information of individualized therapy for CRC patients.

Colorectal cancer (CRC) is one of the most common cancers, and it is the leading cause of cancer death in China and worldwide [1, 2]. Despite improvements in the comprehensive treatment and management of CRC patients in recent years, the 5-year overall survival (OS) rate for advanced CRC is approximately 64.4-66.6% [3]. Surgical resection offers the possibility of a cure for CRC patients and remains the most effective treatment. Nevertheless, we previously reported that approximately 20.1%-57.3% of patients who first undergo complete tumor resection experience disease recurrence [4, 5]. Recent molecular analyses of CRC identified a series of genetic biomarkers, such as RAS, BRAF, APC and PIK3CA, that can aid in the identification of patients at a high risk of disease recurrence after surgery [6-8]. Thus, identifying more novel markers to screen various prognostic risk subgroups and to gain a deeper understanding of the molecular mechanisms involved in CRC progression will allow for postoperative therapy development to improve the current treatment options.

N-myc downstream-regulated gene 2 (NDRG2) is a member of the N-myc downregulated gene family, which belongs to the alpha/beta hydrolase superfamily [9, 10]. NDRG2 is involved in cellular differentiation and human nervous system disorders [11, 12]. Additionally, accumulative evidence indicated that NDRG2 functions as a tumor suppressor that inhibits tumor proliferation, adhesion, and invasion [13, 14]. Moreover, NDRG2 expression is decreased in tumor tissues, and its suppressed expression is associated with poor prognosis in many types of cancers, including lung cancer, esophageal squamous cancer and pancreatic cancer [15-18]. Recent studies have also indicated that NDRG2 abrogated TGF-β-induced epithelial-mesenchymal transition (EMT) and further inhibited the invasion and migration of CRC cells [19, 20]. However, the possible prognostic value of NDRG2 in CRC patients remains to be further elucidated. Understanding the clinical significance of NDRG2 in CRC may help to formulate postoperative treatment strategies for CRC patients.

Patients and collection of samples

A total of 316 patients with primary CRC who underwent primary tumor resection from September 2000 to February 2015 at the Department of Colorectal Surgery at Sun Yat-sen University Cancer Center were recruited for the present study. All included patients met the following inclusion criteria: (1) histologically confirmed colorectal adenocarcinoma; (2) no preoperative anti-cancer therapy; (3) radical resection for colorectal primary tumor; and (4) postoperative follow-up for at least 3 months. The patient demographics, tumor characteristics, adjuvant chemotherapy and follow-up data were collected from the electronic medical record system. The treatment strategy and operability of liver metastases for the patients with liver metastasis were assessed by a multidisciplinary team (MDT). Paraffin-embedded samples were obtained from resected tumors and confirmed by pathological review. Normal tissues that were at least 5 cm away from the tumor were obtained from the patients. CRC specimens were staged in accordance with the 2010 American Joint Committee on Cancer staging system. The study was approved by the Institutional Research Ethics Committee of Sun Yat-sen University Cancer Center (Approval number: B2017-042-01), and all samples were taken with the informed consent of the donors.

Immunohistochemistry was carried out as we previously described [21, 22]. First, the tissue microarrays (TMAs) were constructed from the paraffin- embedded samples using a tissue array instrument (Beecher Instruments, Sun Prairie, WI, USA). Then, the TMAs were sectioned continuously into 4-mm- thick sections, which were dewaxed in xylene, rehydrated and rinsed in graded ethanol solutions. The antigens were retrieved by heating the tissue sections at 100℃ for 5 min in an EDTA solution (1 mmol/L, pH 8.0). The sections were then immersed in a 0.3% hydrogen peroxide solution for 10 min and rinsed with phosphate buffered saline (PBS) for 5 min. All sections were incubated with an NDRG2 primary antibody (1:10000 dilution, ab174850; Abcam, Cambridge, UK) at 4 °C overnight. After washing with 1× PBS, the sections were treated with a goat antibody against a mouse/rabbit secondary antibody (Envision; Dako, Glostrup, Denmark) at 37.5 °C for 30 min. Finally, the staining was developed with 3,3'-diaminobenzidine tetrahydrochloride (DAB, Dako, Glostrup, Denmark).

The patients were monitored through subsequent visits every 3 months for the first 2 years and then semiannually for 5 years after primary tumor resection. Clinical examination, CEA and carbohydrate antigen 19-9 (CA19-9) detection, and chest radiography were performed every 3 months. Chest/abdominal/pelvic CT and colonoscopy were conducted every year. OS was defined as the interval from the date of primary tumor resection to the date of death from any cause or to the last follow-up. Recurrence-free survival (RFS) was defined as the interval from liver resection to the date of disease recurrence, death or the last follow-up. Random censoring was applied to patients without recurrence or death at the last follow-up date. The final follow-up visit occurred in January 2017.

Statistical analyses were performed using IBM SPSS statistics software, version 21.0 (IBM Corp., Armonk, NY, USA). The corresponding figures were drawn using GraphPad Prism v6.0 software (GraphPad Software Inc., La Jolla, CA, USA). Categorical variables are presented as percentages, and their comparisons were assessed using the Chi-square test or Fisher's exact test. Continuous variables are presented as the median (range). The Mann-Whiney U test was used for two-group comparisons, and the Kruskal-Wallis H test was used for multiple group comparisons. Survival outcomes were evaluated by the Kaplan-Meier method and compared using the log-rank test. Parameters for which P < 0.05 for OS in the univariate Cox models were further assessed in multivariate Cox models. Hazard ratios (HRs) and 95% confidence intervals (CIs) were subsequently generated. The statistical tests used above were two- sided, and a P value <0.05 was considered significant.

Association between NDRG2 expression and long-term survival in CRC patients 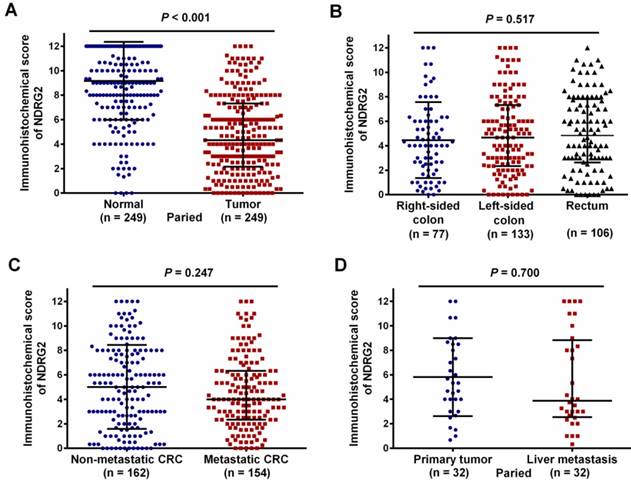 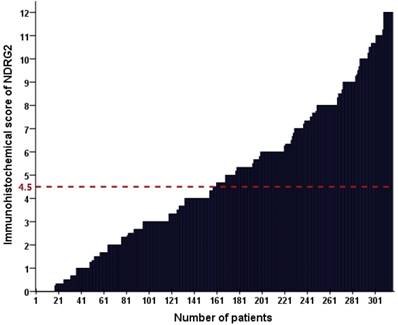 Several research groups have investigated and reported that decreased NDRG2 expression could contribute to reduced long-term survival in CRC patients. Chu D et al first reported that patients with reduced levels of NDRG2 mRNA had significantly shorter disease-free survival and OS than patients with normal NDRG2 mRNA expression. The results provide the first evidence that decreased NDRG2 mRNA expression in primary human CRC might be a powerful predictor of recurrence and outcome [23]. Kim YJ et al also showed that low NDRG2 expression levels were associated with shorter RFS (P=0.006) and a significantly unfavorable OS (P=0.001) [20]. However, these studies failed to evaluate the prognostic value of NDRG2 in different stages of CRC patients. Consistent with these previous results, we found that low NDRG2 expression was associated with a poorer 3-year OS in all patients. Moreover, we found that the prognostic prediction effect was more significant in stage IV patients and in those with liver metastasis. In this regard, we suggest that NDRG2 is a suitable prognostic indicator in metastatic CRC patients.

Association of NDRG2 expression and clinicopathological parameters in all patients

A better understanding of the molecular mechanisms by which NDRG2 functions in tumorigenesis and tumor progression will help us to elucidate prognostic results. A previous study reported that NDRG2 mRNA and protein expression was downregulated in 89% and 100% of human CRC tissue samples [24]. Our present study further showed that NDRG2 expression levels were lower in CRC tissue than in adjacent normal tissue. These results further supported the notion that NDRG2 is a tumor suppressor and is associated with progressive potential. In vitro and in vivo functional studies have shown that the cell viability, proliferation, invasion and migration of NDRG2-overexpressing cells are significantly inhibited and suppressed, which indicates that NDRG2 deficiency could contribute to cancer progression [24-26]. Accumulating evidence suggests that NDRG2 functions as a tumor suppressor by attenuating T-cell factor (TCF)/beta-catenin signaling to maintain healthy colon tissues[27, 28]. A recent study demonstrated that NDRG2 suppressed carcinogenesis by coordinately targeting glucose and glutamine transporters and multiple catalytic enzymes that are involved in glycolysis and glutaminolysis via repressing c-Myc[29]. In addition, NDRG2 loss influenced tumor-associated macrophage (TAM) polarization via the NF-κB pathway in the liver microenvironment, which promoted liver cancer metastasis [30]. This finding could partly explain why patients with low NDRG2 expression and with liver metastasis who received liver resection in our study presented with a significantly poorer 3-year OS rate. We considered that deficient NDRG2 expression might induce a higher proportion of TAM infiltration into the liver microenvironment, which may promote liver recurrence in these patients. Previous studies have demonstrated that downregulation of NDRG2 expression through inhibition of Skp2-p21/p27 axis could impede CRC differentiation and thus promoted tumor proliferation and metastasis [31]. In addition, NDRG2 is also regulated by multiple conditions, treatments, and protein/RNA entities, including hyperthermia, trichostatin A and 5-aza-2'-deoxycytidine [32]. Therefore, as a therapeutic target, upregulation of NDRG2 provides a promising strategy for the treatment of CRC.

Several limitations of the present study should be acknowledged. First, the results of the current study are based mainly on a retrospective study conducted with an uncontrolled methodology and a limited number of patients. Therefore, the findings need to be validated in prospective studies to allow personalized treatment in the future. Second, the 5-year survival data were unavailable for some patients due to an insufficient follow-up duration. This limitation may have led to the underestimation of the impact of NDRG2 expression on OS in stage II-III patients. Moreover, the molecular features of tumors, such as microsatellite instability (MSI), CpG island methylator phenotype (CIMP) level, and BRAF and KRAS mutational status, were not analyzed in our study; an exploration of the relationship of NDRG2 with these molecular markers would help us further understand the impact of NDRG2 on cancer progression in CRC. Despite these limitations, our findings suggest that NDRG2 expression should be considered a routine postoperative measurement for CRC patients undergoing tumor resection.

The present study showed that NDRG2 expression was decreased in human CRC and that NDRG2 might be a valuable prognostic biomarker. The detection of NDRG2 expression may help oncologists evaluate the benefit of surgery and formulate individualized strategies for postoperative treatment.

We would like to thank the all colleagues of Department of Colorectal Surgery in Sun Yat-sen University Cancer Center, who have involved with performing the treatment for current study. The authenticity of this article has been validated by uploading the key raw data onto the Research Data Deposit public platform (www.researchdata.org.cn), with the approval RDD number as RDDB2019000552.

The datasets analysed during the current study were available from the corresponding author on reasonable request. Anyone who is interested in the information should contact fangyj@sysucc.org.cn and panzhzh@sysucc.org.cn.