Objective: Our study aimed to assess factors associated with progression free survival (PFS) and overall survival (OS) in low grade endometrial stromal sarcoma (LG-ESS) and uterine adenosarcoma, and to determine the differences in clinical manifestations and outcomes between the two diseases.

Methods: A total of 132 patients were enrolled in this retrospective study at Peking Union Medical College Hospital from 1998 to 2016. The associations of clinical and pathological factors with PFS and OS were evaluated.

Uterine adenosarcoma, which accounts for 5-10% of uterine sarcoma, comprises a group of mixed mesenchymal tumors most commonly arising from the endometrium, benign glandular epithelium and low-grade sarcoma [1-2]. In these cancers, a benign epithelial component exists together with a malignant stromal component that resembles low-grade endometrial stromal (LG-ESS) [3]. Microscopically, LG-ESS is composed of well-differentiated endometrial stromal cells [4-5], and it is histologically similar to adenosarcoma.

Both LG-ESS and uterine adenosarcoma have malignant stromal components, and their clinical outcomes are also similar. They are generally characterized by an indolent course and a favorable prognosis. Clinical manifestations, of LG-ESS and uterine adenosarcoma usually involve the uterine cavity or intermuscular nodule, or a polypoid neoplasm in the cervix. The standard treatment is total hysterectomy and bilateral ovariectomy.

Although LG-ESS and uterine adenosarcoma have similar clinical manifestations, pathological features and principles and methods of surgery, they have different biological characteristics and represent two different pathological types; thus, the choice of adjuvant therapy and its influence on prognosis are not the same. Uterine adenosarcoma is commonly viewed as one of the more chemo-sensitive soft tissue sarcoma subtypes, and so the choice of chemotherapy follows a soft tissue sarcoma paradigm [3], with single-agent doxorubicin as the standard first-line therapy [3, 6]. The hormonal estrogen receptors (ER) and progesterone receptor (PR) are frequently expressed in patients with LG-ESS and may be exploited for therapeutic benefit [7]. Therefore, LG-ESS is most often treated with anti-estrogen therapy [8-9]. Some success has been reported with gonadotropin-releasing hormone (GnRH) analogs and aromatase inhibitors [8, 10-11].

The purpose of this study is to deepen and update our understanding of these diseases and determine the factors influencing the prognosis. To derive robust inferences, data of different diseases were analyzed separately [12].

This was a single-center study conducted in the Gynecology and Obstetrics department of Peking Union Medical College Hospital (PUMCH). The study received approval from the institutional review board of PUMCH and all patients provided informed consent on admission to PUMCH.

Patients were eligible for this study if they had a definite pathological diagnosis of LG-ESS (n=104) or uterine adenosarcoma (n=28) and were treated at our hospital between 1998 and 2016. Histological classification was based on the 2014 World Health Organization (WHO) classification. Demographic, clinicopathological, treatment, and outcomes data were obtained from medical records and from the telephone follow-up survey. We excluded patients with other neoplastic diseases and those for whom detailed follow-up data were not available (n=4). All patients were Asian women.

Each patient's basic information included age, menopause status, parity, history of uterine leiomyoma (based on previous imaging data), initial presentation, hormone therapy, chemotherapy, radiotherapy, and International Federation of Gynecology and Obstetrics (FIGO) stage. Stage of disease was determined according to the 2009 FIGO staging for uterine sarcomas. All patients were followed up for at least 18 months.

Surgery is the standard treatment. Complete surgery for ESS and uterine adenosarcoma is defined as total hysterectomy with bilateral salpingo-oophorectomy in stage Ⅰ and removal of enlarged nodes and debulking of obvious extra uterine disease in the advanced stages Ⅱ to Ⅳ [4]. In our study, surgical procedures included complete surgery, hysterectomy, myomectomy or lesionectomy.

We assessed the relationships among clinical expressions, pathological features, treatment and disease outcome. Outcome indicators included PFS and OS. PFS is defined as the time from treatment to relapse or to final follow-up, while OS is defined as the time from the beginning of treatment to death or to the last follow-up. Age, menopause status, history of uterine leiomyoma, FIGO stage (stage Ⅰ vs stage Ⅱ-Ⅳ), lymphadenectomy (no vs negative vs positive), Peritoneal lavage cytology (no vs negative for free cancer cells vs positive for free cancer cells), lymphovascular space invasion (LVSI), endometriosis, uterine fibroids, chemotherapy, radiotherapy, and hormone therapy were independent variables for evaluating relapse and survival.

The characteristics of patients are summarized in Table 1 and Table 2.

Statistical analysis was performed with SAS 9.4 software (Cary, NC). Continuous variables are represented by mean ± standard or median (minimum-maximum) and analysis of variance (ANOVA) was performed. Categorical data were expressed by sample number (proportion %) and the χ2 test was used. Cox regression analysis was carried out by the stepwise method. After adjusting for the influence of other factors, a multivariate Cox regression model was constructed based on whether endpoint event occurred and on the time of the occurrence of the endpoint event. Statistical significance was assumed at P<0.05.

* There were significant differences in these indexes (P<0.05) between patients with LG-ESS and patients with uterine adenosarcoma.

PFS of patients (A) with LG-ESS and (B) with uterine adenosarcoma. 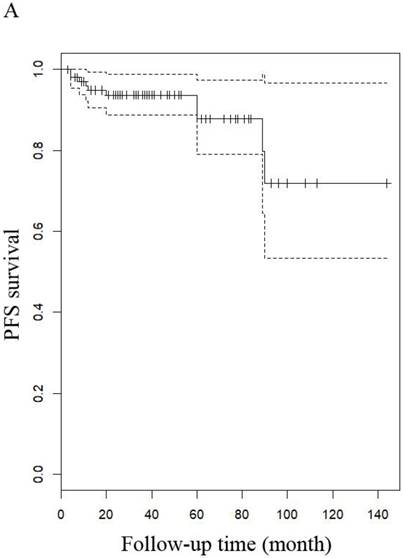 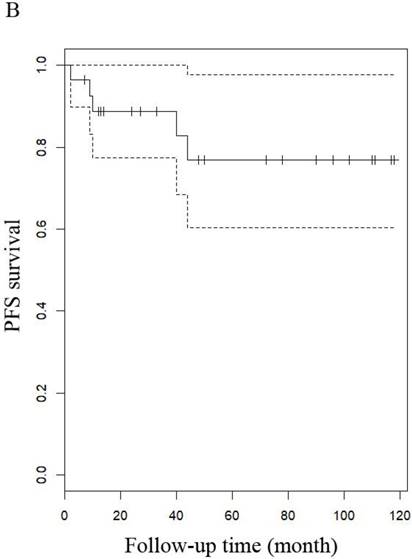 PFS of patients with LG-ESS by (A) menopause (yes or no), (B) stage: (early or late), (C) hormone therapy (with or without), and (D) history of uterine leiomyoma. 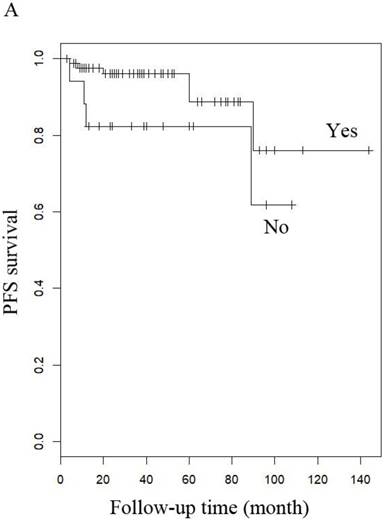 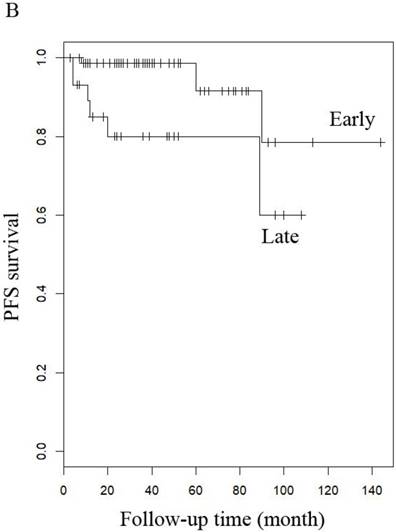 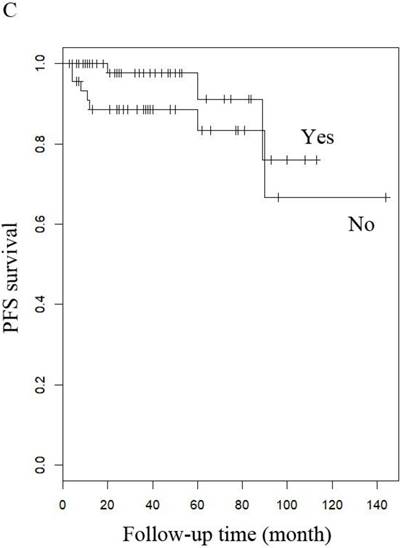 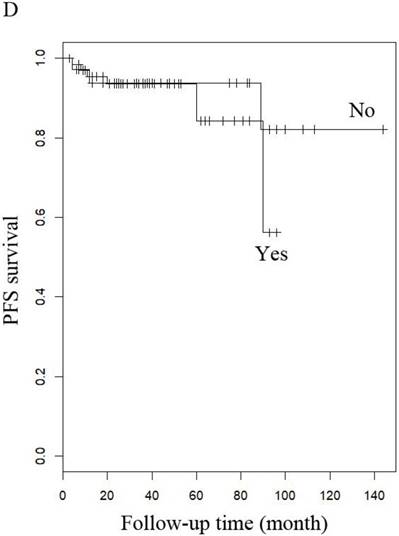 PFS of patients with uterine adenosarcoma (A) with (negative or positive) or without peritoneal lavage cytology, and (B) with or without Radiotherapy. 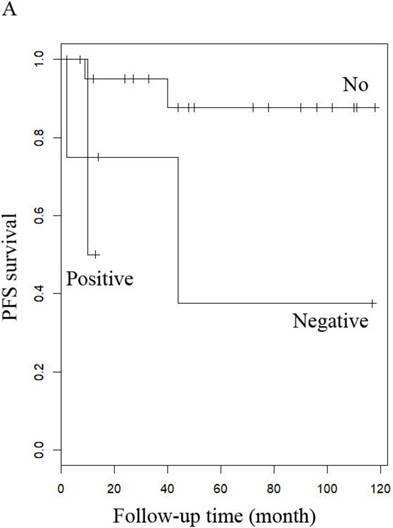 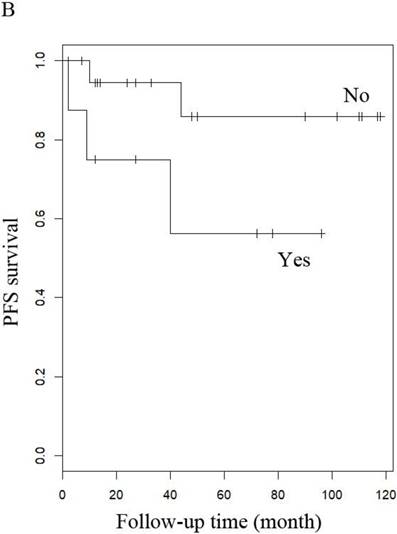 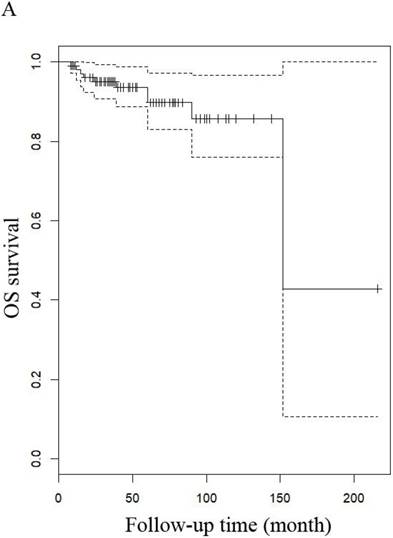 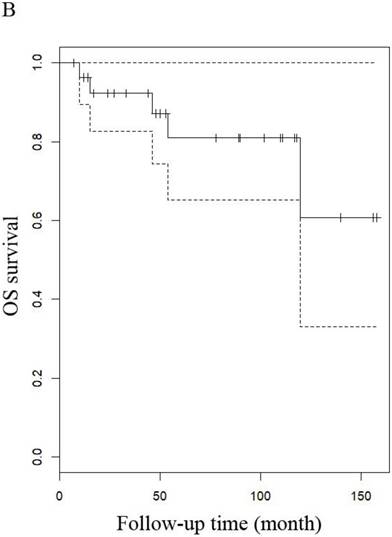 OS of patients (A) LG-ESS in early or late stage and (B) uterine adenosarcoma with (negative or positive) or without peritoneal lavage cytology. 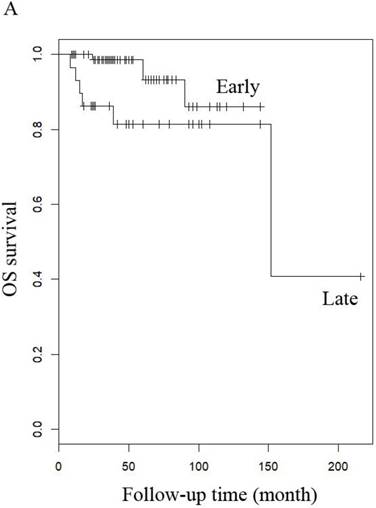 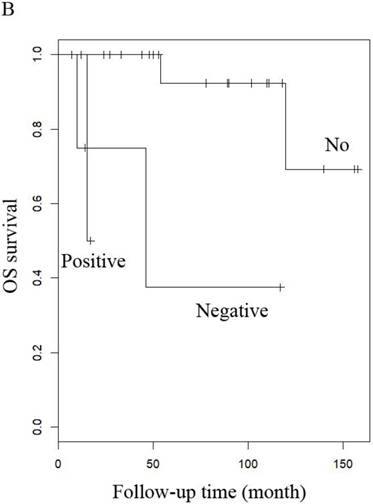 ESS is a rare pathological type of uterine sarcoma, which is often misdiagnosed as benign uterine diseases because of a lack of characteristic imaging and clinical manifestations. Most of ESS patients were misdiagnosed as having uterine leiomyoma before surgery, which delayed treatment; this may contribute to the poor prognosis of LG-ESS patients with a history of uterine fibroids. In patients with uterine adenosarcoma, tumors often grow like polyps. Therefore, the disease is often found early owing to neoplasms of the vagina and abnormal vaginal bleeding.

Standard treatment consists of hysterectomy with bilateral salpingo-oophorectomy in the early stage (stage I) and tumor cell reduction surgery in advanced stages (stage Ⅱ-Ⅳ) [4]. Whether to keep ovaries in patients with LG-ESS and uterine adenosarcoma is still under debate. In our cohort, of 17 patients who underwent ovarian preservation surgery, one was 72 years old and diagnosed as stage IV, this patient died 12 months after diagnosis. Of the remaining 16 patients who presented at an early age (range: 15-36 years), two patients were in stage Ⅱ and 14 were in stage I. Ten of them received hormonotherapy and two received chemotherapy; none of the 16 patients relapsed during the follow-up period. In agreement with Carroll et al. [13], we believe that local resection or with or without adjuvant therapy can be considered for young patients in the early stages who desire future fertility.

In this study, 12 patients received myomectomy or lesionectomy, 11 of who had no recurrence during the follow-up period. We found no differences in outcomes between laparoscopic myomectomy and abdominal myomectomy. The US Food and Drug Administration released a warning in 2014 that the use of a laparoscopic electric morcellator in patients with unpredictable uterine sarcoma can increase the risk of dissemination of tumor tissue in the abdominopelvic cavity, particularly affecting long-term survival rates [14-15,27]. In Gao' study [15] showed that fibroid morcellation during laparoscopic surgery (including laparoscopic, transvaginal and transabdominal approaches) had no significant impact on PFS and OS, while grade was a significant risk factor for the prognosis of patients with uterine sarcoma, consistent with our results.

The prognostic significance of lymph nodal metastasis and complete lymphadenectomy is still a matter of debate [4, 10, 16-17]. According to multivariate Cox regression analysis, we found that lymph node dissection did not improve the prognosis of patients with LG-ESS or uterine adenosarcoma. Rates of lymph nodes positivity in patients with LG-ESS and uterine adenosarcoma were only 6.25% and 0% respectively. However, Seagle's study [18] found that lymph node positivity showed a weak trend toward a strongly negative prognostic association, and those women with high-grade ESS and no surgical node evaluation had significantly decreased survival. A meta-analysis by Si's meta-analysis [19] suggested that lymphadenectomy has little prognostic or therapeutic benefit in patients with uterine sarcoma. Systematic lymphadenectomy may not be recommended in patients with uterine adenosarcoma or ESS unless the patient has obvious extrauterine involvement, clinically suspicious enlarged nodes, or advanced sarcoma [12].

In addition to surgery, hormone therapy, radiotherapy and chemotherapy are important adjuvant treatments for LG-ESS and uterine adenosarcoma, but their effects need to be identified and discussed. Clinical trials have shown no definite survival benefit of adjuvant radiotherapy, although they have been hampered by the rarity and heterogeneity of these disease types [20]. Adjuvant hormonal suppression with high dose progestins, aromatase inhibitors or GnRH-agonists may have a survival benefit for patients with LG-ESS. The efficacy of hormonal therapy has been well documented in recurrent and advanced disease but has yet to be adopted as routine practice in the adjuvant setting, despite multiple series suggesting a benefit [21-26]. Almost 80% of LG-ESS patients express ER alpha and PgR, providing an opportunity for adjuvant endocrine therapy [13]. Our results indicated that hormone therapy could only improve PFS of LG-ESS, and that menopause and age were protective factors with respect to PFS and OS, respectively. Pathological analyses of uterine leiomyosarcoma have identified ER positivity in approximately 80% of cases and progesterone receptor positivity in 65-80% of cases [13], but we did not find any benefit of hormone therapy for patients with uterine adenosarcoma. Nor did we find that chemotherapy and radiotherapy could improve the outcome of the disease. Our conclusions are consistent with previous studies, in which no survival benefit was seen in uterine adenosarcoma patients who received adjuvant pelvic radiotherapy [2]. Based on our analysis, peritoneal lavage cytology was associated with poor prognosis in patients with uterine adenosarcoma. This might be due to the spread of the tumor cells by incomplete irrigation of the abdominal cavity, or to the skewing produced by our small number of cases, so we need to expand the sample for further study. The optimal adjuvant treatment is still unclear.

Our study had some limitations: As it was a single center retrospective study with limited sample size, the conclusions may be affected by the number of cases. Some patients received treatment in other hospitals before they came to ours, which may limit the generalizability of the results and predispose them to selection bias. Further multicenter trials with larger numbers of patients are required in to confirm our results.

In conclusion, we should be on the alert for patients with suspected uterine myoma or endometrial polyps. In the absence of a clear diagnosis, we should take curettage or biopsy to confirm the diagnosis. Unless the patient has obvious extrauterine involvement, clinically suspicious enlarged nodes, or advanced sarcomas, lymphadenectomy is necessary. For LG-ESS, complete surgery is the main treatment, and adjuvant hormone therapy can improve the patient's prognosis. Owing to the lack of effective adjuvant therapy for uterine adenosarcoma, complete surgery should be carried out.

1. Clement PB, Scully RE. Mullerian adenosarcoma of the uterus: a clinicopathologic analysis of 100 cases with a review of the literature. Human Pathology. 1990;21(4):363-81