Prognostic Significance of Hematological Markers for Patients with Nasopharyngeal Carcinoma: A Meta-analysis

Methods: Relevant studies published prior to February 2018 were identified in the PubMed, Web of Science, EMBASE and Cochrane library databases. The primary outcome was overall survival (OS), and the secondary outcome was progression-free survival (PFS). The pooled hazard ratios (HRs) and 95% confidence intervals (CIs) were calculated.

Nasopharyngeal carcinoma (NPC) is a squamous-cell cancer that has a remarkable worldwide ethnic and geographic distribution [1, 2]. High incidence rates of 20-30 per 100,000 people have been reported in South China, especially in Guangdong Province, and these rates are 100-fold higher than those in Western countries [3]. Because of its anatomic location and radiosensitivity, radiotherapy, especially intensity modulated radiotherapy (IMRT), has become the standard treatment for NPC, and recently, the value of targeted therapy is increasingly appreciated [4]. Although early-stage NPC can be cured, patients usually present with advanced NPC at primary diagnosis, and 20-30% of patients develop local recurrence and/or distant metastasis [5]. The TNM staging system is the gold standard for predicting NPC prognosis; however, this system cannot reflect the biological heterogeneity among tumors. Thus, the identification of reliable biomarkers is highly important for improving prognosis prediction and complementing the existing TNM staging system [6, 7]. Inflammatory cells and proteins play a critical role in tumor development and may serve as prognostic factors in various cancers. Indeed, correlations between prognosis and several hematological biomarkers, such as the lymphocyte ratio (NLR), lymphocyte-to-monocyte ratio (LMR) and Glasgow prognostic score (GPS), have been identified in a wide range of cancers [8-13]. Furthermore, plasma fibrinogen levels and high-density lipoprotein cholesterol (HDL-C) levels have been reported to have prognostic value in predicting survival in colon cancer and gastric cancer, respectively [14]. These markers are more easily available and less expensive to assess than other reported markers. Nevertheless, the prognostic significance of these hematological biomarkers in NPC has not been fully elucidated, and further studies are needed. Accordingly, we conducted a meta-analysis to measure the ability of the abovementioned hematological biomarkers to predict clinical outcomes in NPC.

The inclusion criteria: (1) NPC diagnosed based on pathological examination; (2) studies including an evaluation of the prognosis value of at least 1 hematologic biomarker, such as NLR, PLR, LMR, CRP/ALB, GPS, plasma fibrinogen or HDL-C, in NPC; and (3) HRs and 95% CIs or p-values available or possible to calculate.

The impact of the hematological biomarkers on OS and PFS was evaluated by pooled HRs and corresponding 95% CIs, which were directly obtained from the studies or calculated according to the methods presented by Tierney [16]. Heterogeneity was measured by Cochrane Q test and the I2 statistic. A random-effects model was selected if there was significant heterogeneity (p<0.05 and I²>50%); otherwise, a fixed-effects model was used. We performed a sensitivity analysis by excluding a study and recalculating the combined HRs. Publication bias was evaluated by Begg's funnel plots and Egger's tests. The statistical analyses were conducted using RevMan5.3 (Cochrane Collaboration) and p<0.05 was considered statistically significant.

The flow chart of literature retrieval is presented in Figure 1. In total, 152 studies were initially retrieved from the electronic databases; of these studies, 53 were duplicates. Thirty-five articles remained after screening the titles or abstracts, and then, 12 articles were excluded due to the lack of adequate data. Thus, 23 studies involving 23,417 patients were included in our meta-analysis; the sample sizes ranged from 108 to 3,237. Except for one study, all studies collected data retrospectively [17]. The studies were conducted in Asia and published after 2011. The mean score of NOS is 6.95 with a range from 6 to 8. The characteristics of the eligible studies are displayed in Table 1.

Impact of NLR on OS and PFS in NPC

NA*: Newcastle-Ottawa Quality Scale (NOS) is not suitable for RCT.

Flow chart of the included studies in this meta-analysis. 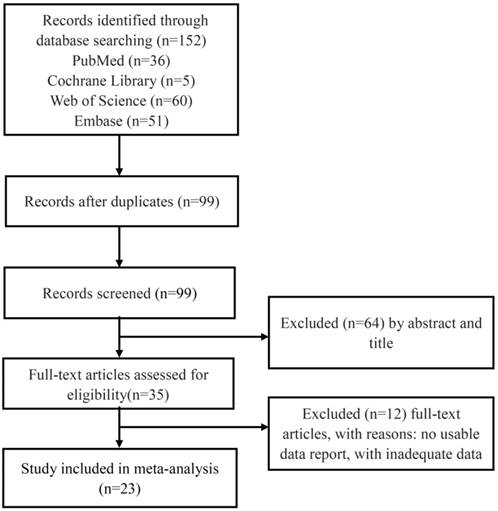 Prognostic effect of LMR on OS

Prognostic effect of CRP/ALB on OS

Prognostic effect of GPS on OS

Prognostic effect of HDL-C on OS

Prognostic significance of plasma fibrinogen on OS, DFS and DMFS 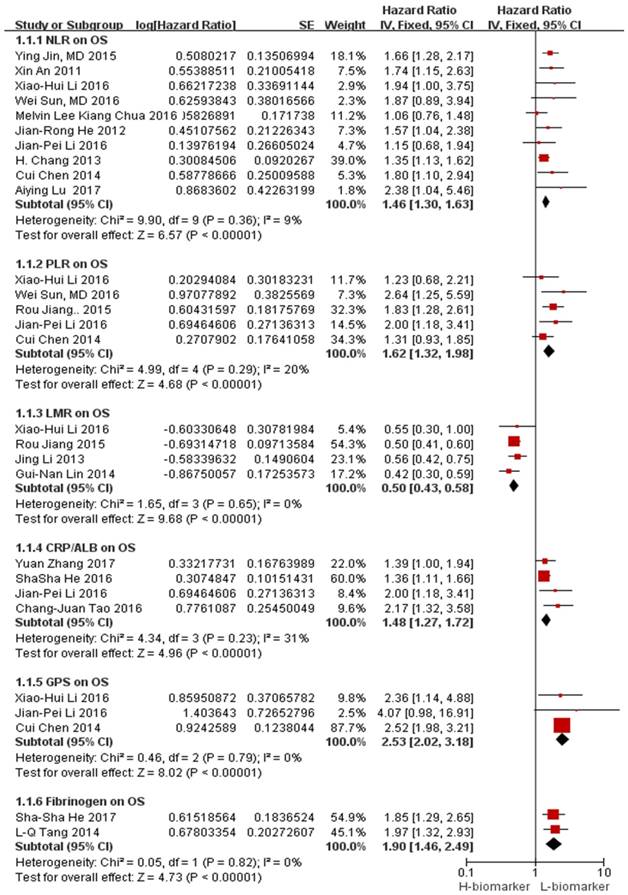 To date, various markers, including hematological parameters, have been applied for the prediction of tumor outcomes. Increasing evidence reveals that a relationship exists between the systematic inflammatory response and carcinoma, and the association with inflammatory proteins (GPS, plasma fibrinogen and HDL-C) has also been reported. These markers can be inexpensive and are readily available. Thus, we performed this meta-analysis to evaluate the prognostic significance of hematological parameters in NPC. 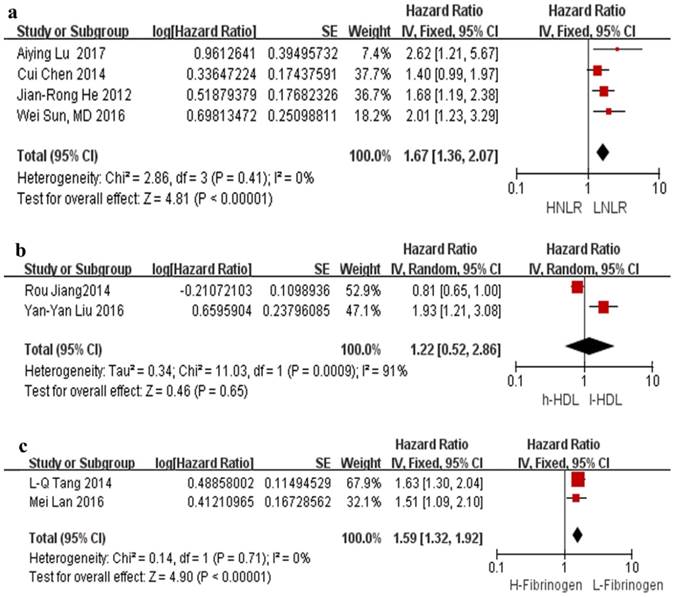 Our pooled analysis showed that hematological markers, including NLR, PLR, LMR, CRP/ALB, GPS and plasma fibrinogen, are related to NPC survival outcomes in Asian populations. Patients with a high LMR were deemed to have a favorable prognosis, whereas high NLR, PLR, CRP/ALB, GPS and plasma fibrinogen were related to a poor prognosis. In addition, the pooled analysis revealed that HDL-C was not associated with prognosis; however, as only two studies were eligible for our analysis, further studies are required.

Although the exact mechanism between hematological parameters and malignancies has not been reported, this association may be illustrated by tumor-infiltrating immune cells and inflammatory proteins. Lymphocytes play a crucial role in the immunologic antitumor responses by inhibiting tumor cell proliferation and inducing cell death. In fact, tumor-infiltrating lymphocytes (TILs) are related to a good prognosis in various cancers [19, 20]. Moreover, by inducing apoptosis in tumor cells, the interaction between CD 8+ and CD 4+ T cells is necessary for the antitumor reaction[21, 22], and increased infiltration of CD8+ T lymphocytes has been reported to improve OS and PFS in NPC[23]. Overall, effective immunotherapy for NPC may depend on the ability to generate cytotoxic T lymphocytes (CTLs) that can home to nasopharyngeal tissue and other metastatic sites. Nevertheless, platelets may protect tumor cells from immune elimination, support tumor metastasis [24] and mediate tumor cell growth, angiogenesis and dissemination by secreting a variety of growth factors [25-27]. Furthermore, an elevated platelet count is reportedly related to a poor prognosis in cancers [28, 29]. Moreover, neutrophils, representing another type of inflammatory cells, may contribute to tumor cell growth, angiogenesis and metastasis by producing cytokines and releasing angiogenic factors [30]. In addition, macrophages derived from circulating monocytes might accelerate tumor progression and angiogenesis [31]. Increasing evidence shows that tumor-associated macrophages (TAMs) are related to worse OS [32], and Bingle et al. [33] demonstrated that the macrophage density in tumors is related to a poor prognosis. In accordance with the above hypothesis, our study determined that high PLR and NLR values are related to poor OS and PFS, whereas high LMR is associated with a favorable prognosis. CRP, which is an acute-phase response protein, is mainly synthesized by hepatocytes induced by pro-inflammatory cytokines [10]. Elevated CRP is related to inflammation accompanied by hypoalbuminemia, which results in dystrophia and further leads to a poor prognosis. The CRP/ALB ratio reveals the relationship between systemic inflammatory responses and malnutrition and has been reported to have a prognostic effect in ovarian cancer [34], hepatocellular carcinoma [10], pancreatic cancer [35], lung cancer [36] and esophageal carcinoma [37]. In our analysis, we combined 4 studies involving 5,385 patients and found that a high CRP/ALB ratio was a significant predictor of an inferior OS in NPC. GPS is another well-recognized inflammation-based prognostic score demonstrated to be associated with survival in various cancers, such as intrahepatic cholangiocarcinoma and ovarian cancer [38-40]. Consistent with the above results, our study indicated that a high GPS was obviously related to poor OS with a convincing conclusion. Additionally, fibrinogen, which is an acute-phase glycoprotein and an important clotting factor, is converted to insoluble fibrin by thrombin, which affects the inflammatory response. Fibrinogen is a bridging factor promoting endothelial adhesion in target organs [41, 42]. Fibrinogen has also been proven to be a prognostic marker in several cancers, such as ovarian cancer and hepatocellular carcinoma [43]. Furthermore, a nomogram based on fibrinogen was generated to predict its prognostic significance in lung cancer, and high fibrinogen levels were related to a shorter OS [44]. In our study, high serum fibrinogen levels were associated with a poor NPC patient prognosis. Moreover, HDL-C, which is a key lipoprotein in cholesterol transport involved in certain signaling pathways important for malignant transformation, may be a carrier of sphingosine 1-phosphate (S1P), which plays an essential role in chemoresistance [45, 46]. Additionally, Takafumi Tamura et al. reported that a low HDL-C level was related to a poor prognosis in gastric cancer [47]. However, we could not conclude that HDL-C is associated with clinical outcomes because only two studies were included. Therefore, additional studies are required.

Inflammation-based prognostic scoring systems considering inflammatory cells (lymphocytes, neutrophils, monocytes and platelets) and proteins (ALB, CRP and HDL-C) are useful because these factors play an important role in the proliferation and metastasis of tumor cells.

There are several highlights in this analysis. First, compared with previous studies based on inflammatory biomarkers in nasopharyngeal carcinoma, such as Li Su et al. [48], both inflammatory cells and proteins were considered in our study, and we included a larger sample size. In their study, Li Su et al indicated that lymphocyte counts and NLR may serve as prognostic makers, although only 14 studies involving 11,651 NPC patients were included. Second, our study included more valuable predicative biomarkers. Tomohiro F. Nishijima et al. [49] and Liangyou Gu et al. [50] demonstrated the prognostic significance of LMR in several malignancies; however, only 3 retrospective studies in these meta-analyses assessed the prognostic value of LMR on NPC. To date, several meta-analyses have indicated that an elevated NLR is a valuable predictive biomarker of a poor prognosis in patients with NPC [51, 52], and the study performed by Yi Fang et al. also indicated that elevated serum CRP levels were related to a worse prognosis in NPC patients [53]. However, these meta-analyses only focused on one biomarker. Third, the biomarkers in our study are inexpensive and easily available. Although the prognostic value of Epstein-Barr virus DNA load and circulating microRNAs in NPC patients has been reported in a meta-analysis [54], in contrast to the hematological markers in our study, the detection of the Epstein-Barr virus DNA load and circulating microRNAs is expensive and poorly repeatable. Moreover, both random-effects and fixed-effects models were used in our meta-analysis, providing a more comprehensive understanding of the results. Nonetheless, there are also some limitations. First, except for one study, the eligible studies were all retrospective analyses. Second, because the cut-off values were identified based on various criteria, the cut-off values for the hematological parameters differed among the included studies. Third, the hazard ratios were obtained from univariate analyses if multivariate analyses were not available. Fourth, only articles published in English were included. Moreover, almost all eligible studies were conducted in the Chinese population, and only 2 studies were conducted in Singapore. Thus, the conclusions might be confined to the East Asian population because compared with other parts of the world, there are many more cases and a much higher incidence of NPC in China and Southeast Asia [55]. Overall, for a biomarker to be used in the clinic, it should be assessed in a systematic manner, and more clinical data are needed to confirm this conclusion.

This meta-analysis suggests that inflammatory cells (such as neutrophils, monocytes, lymphocytes and platelets) and proteins (such as ALB, CRP and HDL-C) have the capacity to predict survival in cancer, including NPC. As widely available and inexpensive biomarkers, hematological parameters may facilitate prognosis prediction in patients with solid tumors. However, prospective and multicenter studies on larger scales are needed to confirm our findings.

25. Sullivan LA, Brekken RA. The VEGF family in cancer and antibody-based strategies for their inhibition. Mabs-Austin. 2010;2:165-75

51. Mascarella MA, Mannard E, Silva SD, Zeitouni A. Neutrophil-to-lymphocyte ratio in head and neck cancer prognosis: A systematic review and meta-analysis. Head And Neck-Journal for the Sciences And Specialties Of the Head And Neck. 2018;40:1091-100

57. He JR, Shen GP, Ren ZF, Qin H, Cui C, Zhang Y. et al. Pretreatment levels of peripheral neutrophils and lymphocytes as independent prognostic factors in patients with nasopharyngeal carcinoma. Head And Neck-Journal for the Sciences And Specialties Of the Head And Neck. 2012;34:1769-76

61. Jin Y, Ye X, He CX, Zhang BB, Zhang YP. Pretreatment neutrophil-to-lymphocyte ratio as predictor of survival for patients with metastatic nasopharyngeal carcinoma. Head and Neck-Journal for the Sciences and Specialties of the Head and Neck. 2015;37:69-75