Pathologic and prognostic impacts of FGFR2 amplification in gastric cancer: a meta-analysis and systemic review

Despite a steady decline in incidence, gastric cancer (GC) is the fifth most common cancer and the third leading cause of cancer-related death worldwide [1,2]. Radical surgery with or without perioperative or adjuvant treatment offers a potential chance of cure for patients with early-stage disease. However, a considerable number of patients present with advanced disease at the time of diagnosis. Moreover, more than 60% of the patients who received complete resection with curative intent develop recurrence within five years after surgery [3,4]. For patients with recurrent or metastatic diseases, systemic chemotherapy with best supportive care can prolong median overall survival (OS) from 3-4 months to approximately 10-13 months [5,6]. The combination of trastuzumab with chemotherapy in patients with HER2-positive advanced GC and the addition of ramucirumab to taxane as second-line therapy in non-selective patients with advanced GC demonstrated modest survival benefits [7,8]. Despite the introduction of new molecular targeted agents, however, the five-year survival rate is still less than 10%; therefore, there is a critical need to identify novel therapeutic targets in order to develop more efficacious targeted agents.

The fibroblast growth factors (FGF) pathway has recently emerged as a potential therapeutic target in several types of human cancers including GC [9-12]. The FGF signaling pathway regulates a variety of cellular functions including cell proliferation, migration, and differentiation [12,13]. The FGFR2 gene is located on chromosome 10q26 and functions as FGF receptor (FGFR). The genetic alterations of FGFR2 reportedly enhance downstream signaling and are associated with cancer development and progression [13-15]. In preclinical models of GC, FGFR2 amplification was associated with increased proliferation and survival of tumor cells and conferred sensitivity to selective molecular agents targeting this pathway [9, 16]. Therefore, FGFR2 amplification has been proposed as a potential treatment target and predictive biomarker for small molecule tyrosine kinase inhibitors (TKIs) or monoclonal antibodies to FGFR2 [9-11,17].

This study was conducted according to the Preferred Reporting Items for Systematic Reviews and Meta-Analyses (PRISMA) guidelines [27]. We searched the electronic databases of PubMed, PMC, EMBASE, Web of Science, and Google Scholar (up to December 2018) to identify studies assessing the correlation of FGFR2 amplification with pathologic features and/or prognosis in gastric adenocarcinoma. The search used following keywords variably combined: “fibroblast growth factor receptor 2” or “FGFR2” AND “gastric cancer” or “stomach cancer”.

Eligible studies should meet the following inclusion criteria: (i) clinical trials and prospective or retrospective cohort studies investigating the correlation of FGFR2 amplification with pathologic features and/or overall survival (OS) in patients with gastric adenocarcinoma, including adenocarcinoma of the esophago-gastric junction; (ii) the use of adequate detection methods including fluorescence in situ hybridization (FISH) or real-time quantitative polymerase chain reaction (qPCR); (iii) results providing sufficient data for odds ratio (OR) with 95% confidence intervals (CI) for pathologic findings or hazard ratio (HR) along with 95% CI for OS; (iv) publication only in peer-reviewed journals; and (v) articles written in English. If the articles did not accord with any of these inclusion criteria, they would be excluded from the analysis.

All eligible studies were independently selected by two researchers (Kim HS and Jang HJ). The following data were extracted: first author, year of publication, country, study period, sample size, stage, detecting methods and cut-off values for FGFR2 amplification, data for estimating ORs with their 95% CIs for pathologic features [tumor depth, lymph node (LN) metastasis, and differentiation], and HR with its 95% CI for OS. If studies included cohorts of different ethnic populations, the data were collected separately to be recognized as independent results. When both univariate and multivariate analysis were performed to get the HR for survival, the data from multivariate analysis were extracted preferentially.

The methodological quality of included studies was scored based on the Newcastle-Ottawa System (NOS) [28]. The scores range from 0 to 9 and studies with a score ≥ 6 were considered to be high quality.

The survival outcomes were expressed as time-to-event HRs with 95% CI. The strength of the correlation of pathological features was shown as ORs with 95% CIs. These statistical values were derived directly from the primary publications. When papers did not provide the ORs and HRs with their 95% CIs, the Engauge Digitizer was used to estimate them from the available data and Kaplan-Meier curves, respectively. The RevMan version 5.3 software (Cochrane Collaboration, Copenhagen, Denmark) was utilized to combine the ORs or HRs along with their 95% CIs. The heterogeneity across studies was estimated by the Q statistics and I2 inconsistency test. The Mantel-Haenszel method (fixed-effect model) was used for pooling homogeneous outcomes (p ≥ 0.1 and I2 ≤  50%), and the DerSimonian-Laird method (random-effects model) was selected when significant heterogeneity was observed (p  <  0.1 or I2 > 50%).

Outcomes are provided as forest plots with diamonds representing the estimate of the pooled effect. The line of no effect is number one for binary outcomes, which depicts statistical significance if not crossed by the diamond [29]. The OR or HR > 1.0 implies worse pathological features or survival for patients with FGFR2 amplified GC.

Publication bias was visually evaluated by the funnel plots and then quantified by the Begg's test and Egger's test [30,31]. Two-sided p was considered statistically significant if it was less than 0.05.

A total of 162 potentially relevant articles were initially found, but 142 of them were excluded after careful screening of the titles and abstracts. Of the remaining 20 potentially eligible studies, 12 were further excluded by the inclusion criteria. Finally, 8 studies were included in the meta-analysis [19-26]. Figure 1 shows the search flow diagram of this meta-analysis. 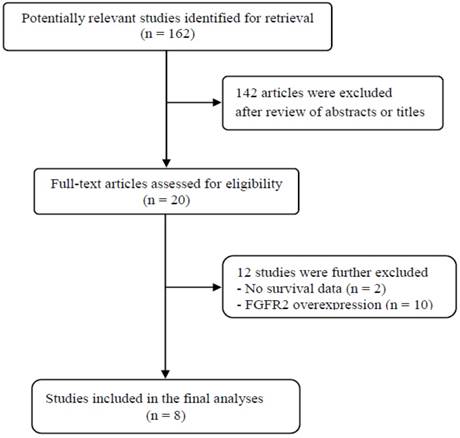 Table 1 summarizes the main characteristics and pathological findings of the eight included studies. The studies were performed retrospectively and published between 2012 and 2017. Two studies [23,26] involved only patients who had received chemotherapy for advanced or metastatic GC. The studies were conducted mostly in Asian populations (from Korea, Japan, China, and Singapore), and one consisted of 3 cohorts from the United Kingdom (UK), China, and Korea [24]. The NOS scores were more than 7 in all the studies, indicating a good methodological quality.

Impact of FGFR2 amplification on survival

Summary of the eight included studies 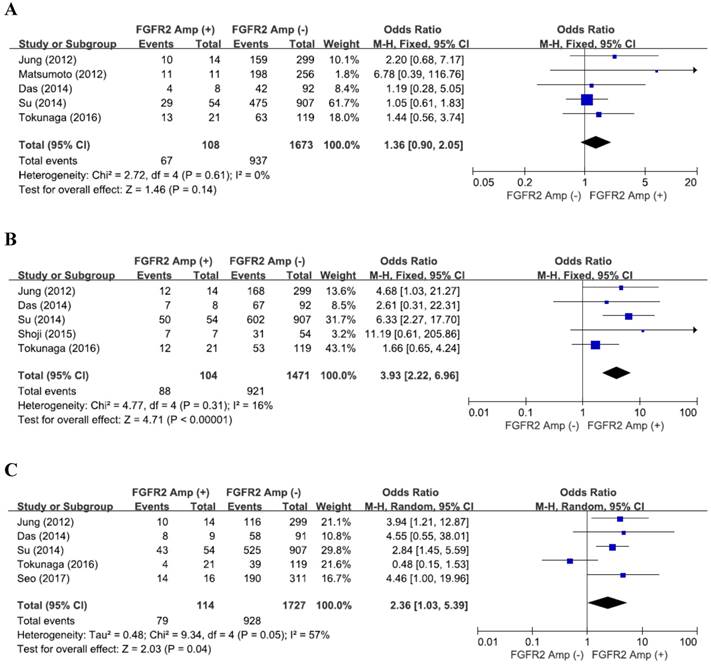 Forest plots of hazard ratios for survival: (A) overall, (B) Asian, and (C) European (UK). FGFR2 amplification was significantly associated with worse survival, regardless of ethnicity. 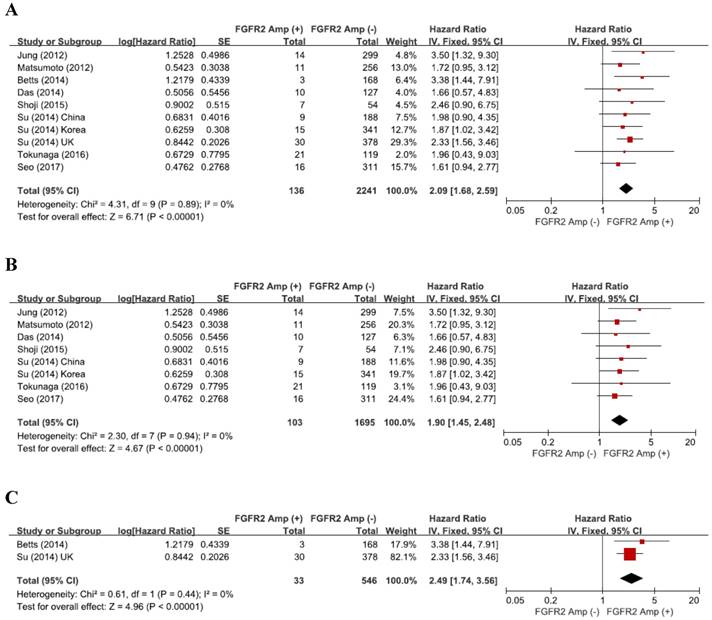 We did not perform publication bias tests for pathologic findings because a small number of studies were included in the analyses. Begg's funnel plot and Egger's test indicated no evidence of substantial publication bias for OS (Begg's p = 0.210, Egger's p = 0.620) (Figure 4).

The FGF/FGFR signaling pathway has been involved in tumorigenesis and progression in human cancers including multiple myeloma, cancers of the stomach, breast, bladder, prostate, and endometrium [32]. Mechanisms for genetic alteration of FGFR2 include gene amplification, mutations, gene fusions, or receptor overexpression. In GC, FGFR2 protein by immunohistochemistry is overexpressed in up to 40%. Although FGFR2 amplification is significantly associated with FGFR2 overexpression [25], FGFR2 gene is amplified rarely in GCs [33]. In the included studies of this meta-analysis, frequencies of FGFR2 amplification varied from 1.8% [21] to 15% [25]. Notably, various laboratory methods, such as real-time qPCR, FISH, chromogenic or silver in situ hybridization, can be used for assessing FGFR2 amplification. Although FISH has been most commonly used, there is no consensus for the cut-off criteria to define FGFR2 amplification [33]. These differences in methodology may be the cause of the large range heterogeneity of FGFR2 positivity and the discrepancies in the prognostic role of FGFR2 amplification among studies. 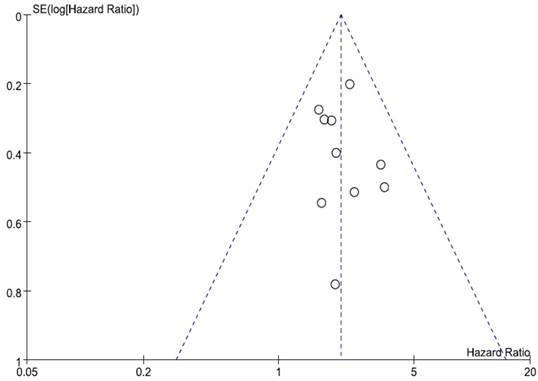 There has been a strong rationale for the development of FGFR2 inhibitors in solid tumors [9-12,16,33-35]. GC cell lines harboring FGFR2 amplification are highly sensitive to FGFR2 inhibitors in preclinical models [9]. Therefore, FGFR2 amplification has attracted significant interest as a therapeutic target for FGFR2-amplified GC. Although several FGFR TKIs has been under active investigation, only AZ4547 has demonstrated encouraging signs of efficacy among patients with FGFR2-amplifed GC so far [37]. AZD4547 is a selective FGFR-1, 2, 3 TKI that has a potent anti-tumor activity [9,38]. AZD4547 induced rapid tumor regression in two in vivo models (SNU16 and SGC083) of GC possessing FGFR2 amplification [9]. In the randomized phase II SHINE study, however, AZD4547 failed to significant improve progression-free survival versus paclitaxel in patients with advanced GC harboring FGFR2 polysomy or gene amplification [39]. In addition, exploratory biomarker analyses revealed marked intratumoral heterogeneity of FGFR2 amplification and poor concordance between amplification/polysomy and FGFR2 mRNA expression. Therefore, the potential usefulness of FGFR2 amplification as a predictive factor for response to FGFR2 targeting therapy remains to be investigated in GC. The mechanisms that cause primary or acquired resistance to FGFR2 inhibitors in GC are unknown. One possible explanation is that other receptor tyrosine kinases (RTKs) can restore the activation of key intracellular signaling pathways despite inhibition of oncogenic kinase, leading to resistance [40]. Actually Chang et al. demonstrated that several RTKs, including EGFR, HER3, and MET, activation contributed to AZ4547 hyposensitivity in FGFR2-amplified GC cells [41]. In addition, combination of AZ4547 and cetuximab (EGFR monoclonal antibody) showed synergic growth inhibition both in vitro and in vivo. These results may provide a rationale for a combination strategy with agents targeting FGFR2 and other resistance-enriched RTKs.

Our study has several inherent limitations. First, the included studies showed considerable differences in the detection methods and cut-off criteria for FGFR2 amplification, tumor stage, treatment, and other demographic or clinicopathological data. Second, the studies were retrospectively performed and therefore might carry the biases of the retrospective design. Finally, the heterogeneity observed among studies could not be completely interpreted although the random-effects model was selected in pooling ORs for differentiation.

28. Stang A. Critical evaluation of the Newcastle-Ottawa scale for the assessment of the quality of nonrandomized studies in meta-analyses. Eur J Epidemiol. 2010;25:603-5