Methods: The Surveillance, Epidemiology, and End Results (SEER) program database was used to identify patients with primary chondrosarcoma of bone and metastatic disease at diagnosis from 2000 to 2013. The prognostic analysis was performed using the Kaplan-Meier method and a Cox proportional hazards regression model.

Results: The SEER database contained 264 cases. The overall survival (OS) and cancer-survival specific (CSS) rates of the entire group at 5 years were 28.4% and 31.2%, respectively. The median OS and CSS were 14.0 ± 2.5 and 17.0 ± 2.6 months, respectively. Multivariate analysis revealed that low tumor grade, surgical treatment, tumor size < 10 cm, and first primary tumor were associated with improved OS. Tumor grade, tumor size, and surgery were independent predictors of CSS. Radiation therapy had no effect on either OS or CSS.

A total of 264 patients diagnosed with chondrosarcoma of bone and metastatic disease at initial presentation were identified from 2000 to 2013. All patient data were obtained using the case-listing session procedure from the SEER program (www.seer.cancer.gov). This study followed standard guidelines and was approved by the Ethics Committee of the Second Affiliated Hospital of Zhejiang University School of Medicine.

First, the International Classification of Diseases for Oncology, 3rd edition (ICD-O-3) was used to identify patients with primary chondrosarcoma (ICD-O-3 codes 9180, 9220, 9221, 9231, 9240, 9242, 9243), using the case-listing procedure. Only patients with metastatic disease were enrolled, by reference to the tumor stage at diagnosis. Chondrosarcoma arising from the extraskeletal locations was excluded. Patients diagnosed before 2000 year were also excluded. All patient diagnoses were confirmed histologically, based either on biopsy results or the surgical specimen. Sixteen patients diagnosed only on the basis of the clinical presentation, or according to the radiography, autopsy, or death records were excluded. One patient with missing survival information was also excluded. Data extracted from the SEER database included age, gender, year of diagnosis, race, location, tumor grade, tumor type, tumor size, surgical treatment, radiation treatment, tumor sequence, cause of death, and survival time. Treatment for tumors in our study refers to treatment for primary tumors. Tumor sequence refers to the sequence in which primary chondrosarcomas occurred in various primary tumors of one patient. We divided the location into four categories: (1) axial (pelvis and spine), (2) appendicular (long and short bones of the upper and lower extremities), (3) rib, sternum, and clavicle, and (4) other locations (mandible, skull, and other atypical locations).

The statistical analyses were performed using Microsoft Excel 2016 (Microsoft Corp., Redmond, WA, USA) and SPSS software (ver. 21.0; SPSS Inc., Chicago, IL, USA). Overall survival (OS) was defined as the time from diagnosis to death from any cause and cancer-specific survival (CSS) was regarded as the time from diagnosis to death due specifically to cancer. The OS or CSS rate and median survival was calculated by life table method. Observations were censored if the patient was alive at the time of the last follow-up. Univariate analyses were performed using the Kaplan-Meier method with the log-rank test. Multivariate analysis was used to determine the independent predictors of OS and CSS with a Cox proportional hazards regression model. The hazard ratios (HRs) and corresponding 95% confidence intervals (CIs) were used to show the effect of various factors on OS and CSS. Differences were deemed statistically significant if the P-value was less than 0.05.

Clinical characteristics of the 264 patients with metastatic chondrosarcoma

Univariate analyses revealed that age, gender, race, location, and tumor type were not associated with either OS or CSS. Both OS and CSS differed significantly with tumor grade, with a high tumor grade portending a worse prognosis. Similarly, tumor size was associated with significant differences in OS and CSS, with tumor size < 10 cm predicting a better prognosis. In terms of treatment, patients who underwent surgical treatment had better OS and CSS than those who did not. However, radiation treatment had no significant effect on OS or CSS (Fig. 1A and C) and the addition of radiation treatment did not significantly improve the OS and CSS of patients who underwent surgery (Fig. 1B and D). No obvious difference was observed in either OS or CSS between the radiation-only and no-therapy groups (Fig. 1B and D). A significant difference in OS but not CSS, based on tumor sequence was also observed (Table 2 and 3).

The multivariate analysis of all patients was shown in Table 4. Tumor grade, tumor size, surgery for primary tumors, and tumor sequence were found to be independent predictors of OS. In terms of CSS, tumor grade, tumor size, and surgery were independent prognostic factors. The multivariate analysis showed no significant difference in either OS or CSS according to age and gender. 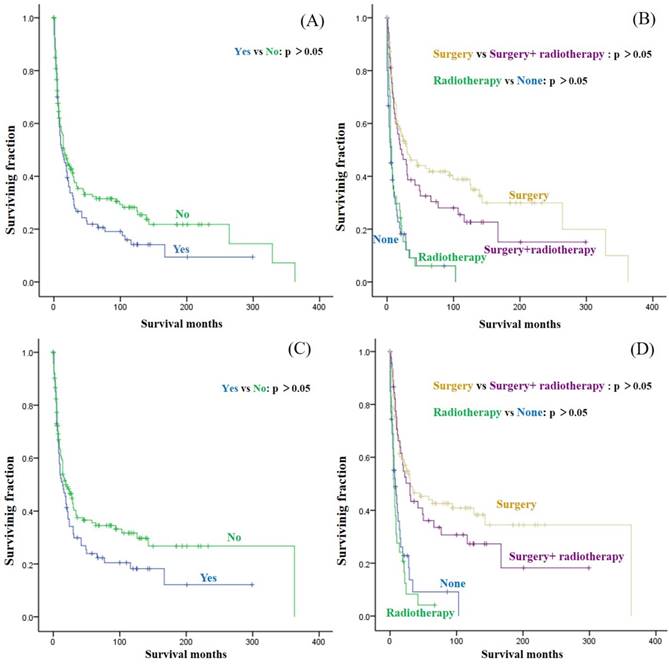 The mean and median age at diagnosis of our cohort were 57.4 and 58 years, respectively, with a male predominance (1.6:1.0), similar to chondrosarcoma overall [4]. Chondrosarcoma not otherwise specified was the most common histological type (67.4%), which was similar to a previous study of all chondrosarcoma [5]. Previous studies found that low-grade chondrosarcoma had a low rate of metastasis [15-18]. However, we found that metastasis at presentation was more frequent with low-grade tumors (42.4%) than high-grade tumors (29.9%), a result that requires further verification due to 27.7% unknown cases. The most common primary sites in our cohort were appendicular and pelvic sites, similar to all chondrosarcomas [1]. Damron et al. [3] reported that the 5-year survival rate for all chondrosarcoma was about 75.2% and Angelini et al. [19] reported that the survival rate of central conventional chondrosarcoma was 92% at 5 years and 84% at 10 years. Imai et al. [20] showed that the 5-year OS of unresectable chondrosarcomas was 53%. By contrast, we found that the 5- and 10-year OS rates of the metastatic chondrosarcoma were 28.4% and 22.8%, respectively, while the 5- and 10-year CSS rates were 31.2% and 26.6%. Additionally, the median OS and CSS of our cohort were 14.0 ± 2.5 months and 17.0 ± 2.6 months, respectively, suggesting a pretty poor prognosis. Because of the dismal survival of this patient population, it is necessary to explore prognostic factors to better guide the management of such patients.

Tumor type is of great significance in the prognosis of chondrosarcoma. In general, the prognosis of patients with dedifferentiated chondrosarcoma was reported to be much poorer than for other types, with a 5-year survival rate less 10%-25% [22-25]. Grimer et al. [26] reported that dedifferentiated chondrosarcoma patients with metastatic disease at presentation had extremely poor prognosis, with a median survival of 5 months. As chondrosarcoma, not otherwise specified (NOS) accounted for 67.4%, other types were integrated for analysis. However, we found that tumor type made no difference to the prognosis, suggesting that less attention should be paid to tumor type in those metastatic patients. Many studies reported that the tumor size was associated with better survival of chondrosarcoma patients [21, 27]. Kamal et al. [7] found that tumor size was not correlated with survival and Bindiganavile et al. [22] revealed that tumor volume (in mL) was not a predictor in chondrosarcoma. In our cohort, tumor size > 10 cm was an independent predictor of both OS and CSS.

This study had several limitations. First, the SEER database does not include information about local recurrence or metastasis during follow-up, which may affect the prognosis. Second, other known prognostic factors in cancer survival such as surgical method and chemotherapy, were not available in this database. Despite these shortcomings, the SEER database provides important insights into rare cancers, such as primary chondrosarcoma of bone and metastatic disease at diagnosis.

This is the largest population-based study to describe the demographics and analyze the prognosis for 264 patients with primary chondrosarcoma of bone and metastatic disease at diagnosis. OS and CSS rates of the entire group at 5-year were 28.4% and 31.2%, respectively. The median OS and CSS were 14.0±2.5 and 17.0±2.6 months, respectively. Independent predictors of OS include tumor grade, tumor size, surgery and tumor sequence. Tumor grade, tumor size, and surgery were calculated as independent predictors of CSS. Our study explored OS and CSS and their risk factors in this special cohort and laid a solid foundation for future research of standard therapy.

This study was supported by the National Key R&D Program of China (2018YFC1105400), and Medical and Health Science and Technology Plan of Department of Health of Zhejiang Province (WKJ-ZJ-1821).