A Nomogram Predicting Lymph Node Metastasis in T1 Breast Cancer based on the Surveillance, Epidemiology, and End Results Program

Methods: We identified female patients with T1 breast cancer diagnosed between 2010 and 2014 in the Surveillance, Epidemiology and End Results database. The patients were randomized into training and validation sets. Univariate and multivariate logistic regressions were carried out to assess the relationships between lymph node metastasis and clinicopathological characteristics. A nomogram was developed and validated by a calibration curve and receptor operating characteristic curve analysis.

Conclusions: A better understanding of the clinicopathological characteristics of T1 breast cancer patients might important for assessing their lymph node status. The nomogram developed here, if further validated in other large cohorts, might provide additional information regarding lymph node metastasis. Together with sentinel lymph node biopsy, this nomogram can help comprehensively predict lymph node metastasis.

In developed countries, T1 stage breast cancers have become the most frequently diagnosed invasive breast diseases [1-3]. Patients with lymph node metastasis early in the disease may have biologically aggressive phenotypes, which have been proven to be correlated with a higher risk of distant spread [4]. The known predictors of axillary node metastases include tumour size, lymphovascular invasion, tumour grade and patient age [5, 6].

Sentinel lymph node biopsy (SLNB) was introduced as an alternative to axillary lymph node dissection (ALND) decades ago, with a similar staging capacity [7]. The frequency of axillary lymph node metastases in T1 breast cancer range from 10% to 26% [8], and the risk of missing metastases using SLNB can range from 1% to 4% [9], with a false negative rate of 10% [10, 11]. In addition, SLNB only examines the axillary sentinel nodes, so differences in primary tumour sites lead to significant changes in false-negative rates [10, 11]. Metastasis could also occur in extra-axillary lymph nodes. In studies with internal mammary node biopsies, approximately 7.8% of patients with negative axillary nodes had positive internal mammary biopsies [9].This evidence implies that SLNB might not be sufficient for the diagnosis of lymph node metastasis in T1 breast cancer patients. Combining SLNB and factors predictive of lymph involvement to evaluate the lymph node status could help better assess lymph node metastasis in T1 patients. As a surgical technique, SLNB leads to subjective lymphedema in both patients with both positive and negative nodes [12]. The aim of this study was to screen the clinicopathological characteristics that are associated with lymph node status and combine them into a predictive nomogram, which is a simple graphical representation of a statistical predictive model that generates a numerical probability of a clinical event [13], by using a population-based study cohort collected from the Surveillance, Epidemiology, and End Results (SEER) database. This nomogram was constructed to identify the risk of lymph node metastasis and might provide additional information regarding a patient's lymph node status in addition to that provided by SLNB. Furthermore, patients with lower risk of lymph node involvement might avoid having to undergo SLNB.

We retrieved the data for 91,364 invasive, stage T1 breast cancer patients registered in the SEER database from January 1, 2010, through December 31, 2014. The patients were selected according to the following criteria: female patients; AJCC stage T1; only one primary tumour; known oestrogen receptor (ER), progesterone receptor (PR) and human epidermal growth factor receptor 2 (HER2) status; known tumour grade; known race; known lymph node status. The T stage was further classified as T1 (0-1 mm), T1a (2-5 mm), T1b (6-10 mm), and T1c (11-20 mm) according to the Breast-Adjusted AJCC Stage (1988+) categories. T and N stage in SEER database are according to Adjusted AJCC(6th). The lymph node status was identified according to the Regional Nodes Positive term in SEER. Patients diagnosed before 2010 were excluded because their HER2 statuses were unknown.

Construction and validation of the nomogram

Patients with known variables were randomly classified into training and validation sets in a 1:1 ratio for development and validation of the nomogram. We screened the clinicopathological characteristics that are associated with lymph node status and found statistically significant variables as follow: age at diagnosis, race, primary tumour site, tumour grade, T stage, and tumour subtype. Variables above were included in the nomogram. We used R (version 3.4.2) to establish the nomogram with R codes attached to the supplementary file. To assess the performance of the nomogram, we used a calibration curve with the bootstrapping method to illustrate the association between the actual probability and the predicted probability of positive lymph nodes in the training set [14, 15]. Receiver operating characteristic (ROC) curves, with the area under curve (AUC) value reported, were applied to evaluate the sensitivity and specificity of the nomogram for predicting lymph node metastasis in both the training and validation sets.

We used the chi-square test to evaluate the relationship between the lymph node status and the appropriate variables. According to the nomogram, we calculated the total points for all patients and used Youden's index to identify the best cut-off value. The training and validation sets were stratified into two subgroups according to the cut-off point. Univariate logistic regression analyses were performed to show the correlation between the nomogram and the risk of lymph nodes metastasis.

Fisher's test was performed when necessary, and all reported P-values are two-sided. Only P-values less than 0.05 were deemed statistically significant, unless stated otherwise. SPSS (version 22.0) and R (version 3.4.2) were used to perform the statistical analyses. The R packages rms, pROC, Hmisc and ggplot2, parallel, and Daim (available at URL: http:// cran.r-project.org/web/packages/) were used.

Age, race, and tumour size, grade, primary site, histologic type and subtype were identified as being significantly associated with positive lymph nodes (Supplementary Table 1). All significant factors in the univariate analysis were included in the multivariate logistic regression analysis (Table 2). Histological type was not an independent predictor in our study (P=0.138). All the other variables showed statistically significant predictive capability for positive lymph nodes (P<0.001). The results showed that hormone receptor (HR)-/HER2+(P<0.001, OR=1.90, 95%CI:1.56 -2.31) patients had more positive lymph nodes compared to HR+/HER2+ patients (P<0.001, OR= 1.34, 95%CI:1.16-1.54). There was no significant difference between HR+/HER2- patients and triple negative patients (P=0.275).

Construction and validation of the nomogram

We established a nomogram that incorporated the significant predictive factors from the multivariate analysis (Figure 1). Age, race, primary tumour site, tumour subtype, and T stage, which were shown to be independent predictors in the multivariate logistic regression analysis, were included in the nomogram. By summing the scores of each variable, we can predict the probability of positive lymph nodes in a specific patient. Younger black patients with grade 3, T1c and HR-/HER2+ tumours in the axillary tail of the breast had higher scores. However, older white patients with grade 1, T1mic and HR+/HER2- tumours at inner sites had a lower risk of positive lymph nodes. The risk of positive lymph nodes predicted by our nomogram ranged from 0.01 to 0.5.

Clinicopathologic characteristics of the cohort by lymph node status.

Calibration plot of the nomogram for the probability of positive lymph nodes (bootstrap 1000 repetitions) . 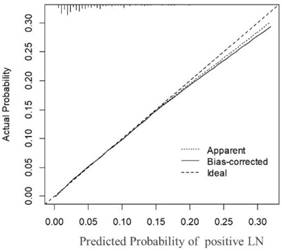 Stratifying patient risk by the nomogram

We determined the cut-off value of total points to predict lymph node metastasis according to Youden's index in the training set. Both the training set and validation set were divided into two groups: the low score group (total points≤182) and the high score group (total points>182). After applying the cut-off value to the training set, we found a significant difference in the probability of lymph node metastasis between the high and low score groups in univariate analysis (OR=4.15, 95% CI:3.77-4.57, P<0.001). The result was consistent in the validation set (OR=4.53, 95% CI 4.10-5.00, P<0.001; Table 3).

In the present study, we developed a predictive nomogram to evaluate the probability of positive lymph nodes in patients with T1 breast cancer based on the clinical and pathologic characteristics of the primary tumours. To validate the performance of the nomogram, we generated a calibration plot with bootstrap sampling and ROC curves in both the training and validation sets. According to previous studies, biomarkers with AUC between 0.7 and 0.9 have superior accuracy, indicating acceptable discriminations [16, 17]. Thus, we proved that the nomogram has high sensitivity and specificity in predicting the lymph node metastasis.

As to clinical utility of our nomogram, we could discuss it in different scenarios. It's widely accepted that SLNB is the standard procedure for axillary staging in patients with early breast cancer. However, in some patients, SLNB might not be sufficient for the assessment of metastatic lymph nodes. In the ALMNAC validation study, patients with higher tumour grade had higher false negative rate of SLNB; and the risk of patients with a missed axillary disease after a negative SLNB is 2.2% [22]. The false-negative rate was also higher for tumours in the outer quadrants of the breast [23, 24]. In the present study, we also found the same result, i.e. tumours with higher grades located in the outer part were independent predictors of lymph node metastasis. In addition, the patients stratified into different risk subgroups according to our nomogram had different prevalence of lymph node metastases. Therefore, patients with different clinicopathologic features might have variable false-negative rate. Combining our nomogram could help understand lymph status better. In the other hand, for patients with metastatic nodes before preoperative/neoadjuvant systemic therapy (NACT), the false-negative rate with SLNB after treatment may range from 10% to 30%. Moreover, performing SLNB leads patients to the risk for long-term complications including permanent lymphedema. Thus for those patients who are predicted to have a lower possibility of lymph node metastasis (<10%) according to our nomogram, but with high false negative SLNB rate (>10%) [11] or high risk for long term SLNB complications, might avoid undergoing SLNB.

One limitation of our study was that we could not obtain additional information from the SEER database, including the presence of lymphatic or vascular invasion, which have been demonstrated to be significant factors for axillary lymph node metastasis in some single centre investigations [18,29]. Including these predictive factors may improve the sensitivity and specificity of our nomogram. Another limitation is that we have not validated the nomogram in patients with SLNB. The information about whether patients underwent SLNB was unavailable in SEER database, therefore we tried to validate the nomogram in our own database which has the axillary surgery methods info. However, the nomogram was build based on white majority population, and race is an important factor. Thus we could not validate the nomogram in our own database with almost Asian patients. We also tried to manually deleted the race factor from nomogram, which turns out the modified nomogram won't work at all. This further validated the race's role in predicting. In addition, our study was a retrospective study, and therefore it was challenging to avoid selection bias or information bias. Most of the population in this study was American; whether similar biological characteristics of patients with small tumours and lymph node metastasis exist in an Asian population needs further investigation.

The authors are grateful to Jiong Wu, Guang-Yu Liu and Zhen-Zhou Shen for their advice of construction of the nomogram.

The funders had no role in the study design, data collection and analysis, decision to publish, or preparation of the manuscript authors.

All the procedures followed were in accordance with the Helsinki Declaration (1964, amended in 1975, 1983, 1989, 1996 and 2000) of the World Medical Association. The data released by the SEER database was publicly available and does not require informed patient consent because cancer is a reportable disease in every state in the United States.