Materials and Methods: The retrospective analysis involved 96 patients who had a diagnosis of LNI with available data on the first PSA level at postoperative 6 weeks after RP and PLND between 2002 and 2014 at our institution. PSA persistence was defined as PSA ≥ 0.1 ng/ml at 6 weeks after surgery. Radiographic progression was defined as positive imaging during follow-up after the onset of biochemical recurrence, consisting of a bone scan and/or computed tomography (CT) and/or magnetic resonance imaging and/or 18F-(2-deoxy-2-fluoro-D-glucose positron emission tomography/CT scan. Comparative analysis of patients with and without PSA persistence was done, and Kaplan-Meier curve analysis with log-rank test and Cox proportional hazard regression models assessed radiographic progression free survival (PFS).

Conclusions: Early assessment of PSA after surgery is important for predicting radiographic progression in node-positive prostate cancer patients. Risk stratification based on the early PSA value after surgery would be helpful to identify patients who may benefit from early adjuvant therapies.

Pelvic lymph node dissection (PLND) is usually recommended for a subset of intermediate-risk group of nodal metastases > 5% according to the preoperative nomograms, and in all high-risk cases of prostate cancer (PCa) [1-3]. The prevalence of lymph node invasion (LNI) is approximately 10% (up to 14%) after radical prostatectomy (RP) and extended PLND (ePLND) [4-6]. However, not all node-positive patients have the same long-term prognosis [7,8]. Accordingly, several prediction tools have been developed to assess the outcome of patients with LNI based on clinicopathological parameters [2,3,6,9].

RP and ePLND should theoretically result in an undetectable level of prostate specific antigen (PSA) within 21-30 days after surgery considering PSA's half-life of 3.15 days [9,10]. Therefore, early PSA assessment after surgery could be a beneficial indicator of optimal cancer control, and a surrogate for residual tumor burden and/or micro-metastasis. Bianchi et al. [6] showed that PSA persistence (PSA ≥ 0.1 ng/ml) 6 weeks after RP and ePLND was an independent predictor of both clinical recurrence and cancer-specific mortality in patients with LNI. Accordingly, PSA persistence could be an important surrogate marker in planning the optimal treatment strategy. Conversely, adjuvant therapies like adjuvant radiotherapy could be waived or delayed in case of PSA that is not detectable (< 0.1 ng/ml) 6 weeks after surgery. Other studies also showed that patients with low volume positive LN (single or ≤ 2) can display good long-term results [8,11]. Subsequently, the authors recommended that close observation with delayed adjuvant hormone therapy could be considered in these groups. Conversely, the foregoing indicated to us that risk stratification of node-positive patients based on early PSA value after surgery is helpful to identify patients who may benefit from early adjuvant therapies.

To assess this, we evaluated the prognostic value of early postoperative PSA assessment after RP and PLND in node-positive PCa patients, using RP data of a Korean large tertiary referral center.

Institutional Review Boards of the Seoul National University Hospital approved this study (Approval number: H-1703-128-841). As the present study was carried out retrospectively, written informed consent from patients was waived. Personal identifiers were completely removed and the data were analyzed anonymously. Our study was conducted according to the ethical standards of the 1964 Declaration of Helsinki and its later amendments.

Clinical data of 2670 patients who underwent RP for clinically localized or locally advanced PCa between 2002 and 2014 at our institution were reviewed retrospectively. Patients with preoperative evidence of distant metastases were excluded. PLND was performed according to the surgeon's preference. Subsequently, a total of 740 patients (27.7%) underwent PLND, with standard PLND (sPLND; external iliac, obturator and internal iliac areas) for 593 patients and ePLND (adding the common iliac area and the presacral area to sPLND) for 147 [1,12]. LNI was reported in 114 (15.4%) patients. Patients had received adjuvant therapy according to the surgeon's discretion within 3 months after RP without any clinical evidence of residual or recurrent disease at the time of treatment.

Among them, patients who had no data of PSA value at 6 weeks postoperatively (n=6), who received adjuvant treatment prior to the assessment of PSA at 6 weeks (n=4), and who received salvage treatment due to the high PSA nadir level (> 0.2 ng/mL, n=8) were excluded. Ninety six patients were included in final analysis.

The clinicopathological characteristics were compared between PSA persistence and no persistence groups using chi-squared test for categorical variables, and independent t-test or Mann-Whitney U test for continuous variables. Kaplan-Meier curve analysis was used to calculate survival estimates for radiographic PFS and log-rank test was used to conduct comparisons between the groups. Univariate and multivariate Cox-proportional hazard regression analyses were performed to evaluate significant variables associated with radiographic PFS. Age, BMI, preoperative PSA, operative type, pathologic T stage and GS, total number of removed LNs, number of positive LNs, LN density, ECE, SVI, PSM, LVI, status of adjuvant therapy, BCR, and PSA persistence were included in the analyses. The variables that were included in the multivariable Cox proportional-hazard models were selected from the univariate analyses based on p-values of <0.05, and final model was derived using the backward selection method with an elimination criterion of P>0.05. All statistical analyses were performed using commercially available software (IBM SPSS Statistics ver. 21.0, Armonk, NY, USA). Twosided pvalue of <0.05 was considered statistically significant.

Results of the comparative analysis of clinicopathological features between PSA persistence group and no PSA persistence group are summarized in Table 1. Those with PSA persistence showed significantly higher number of positive LNs (p=0.037), LN density (p=0.012), and radiographic PFS (p=0.022). There were no significant differences between the two groups in terms of age, BMI, preoperative and at 6-week PSA, operative type, pathologic T stage and GS, total number of removed LNs, ECE, SVI, PSM, LVI, status of adjuvant therapy, and BCR.

Table 2 summarizes the results of univariate and multivariate Cox regression analyses based on the total study cohort. Univariate analysis revealed pathologic GS (p=0.035), adjuvant therapy (p=0.030), and PSA persistence (p=0.015) as significant predictors of radiographic PFS. Only PSA persistence was identified as a single significant predictor of radiographic PFS in the multivariate analysis (p=0.046). The first site of radiographic progression was local (prostatic bed), pelvic LNs, and distant (skeletal and/or visceral metastases) in 19.0%, 14.3%, and 66.7% patients, respectively (Table S1), with no statistically significant difference between the two groups.

PSM, high number of positive LNs (a potential proxy for systemic dissemination), biopsy and pathologic GS 8-10, and pathologic stage >T3a have been significantly associated with PSA persistence [6,9,13-16]. Previous authors have hypothesized that those with PSA persistence either had residual PCa in the prostatic bed/pelvic areas (PSM) or already had occult micro-metastases (positive LNs) at the time of surgery. Current study also showed that patients with persistent PSA had a significantly higher number of positive LNs (2.9 vs. 1.8, p=0.037) and LN density (0.25 vs. 0.15, p=0.012) (Table 1). However, no significant differences were evident between two groups in terms of pathologic GS or T stage; this may reflect the small number of patients, especially ≤ pT2 patients (7.3%). In addition, PSM also did not affect PSA persistence. Consequently, it may be provisionally considered that occult micro-metastasis through positive LNs is a more powerful factor for PSA persistence than residual tumor (even including benign tissue) through PSM [13-16]. 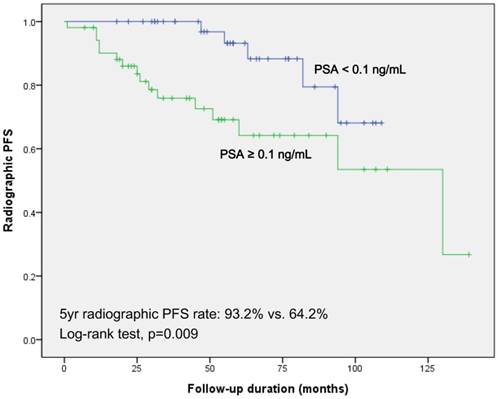 In PCa patients with LNI, the optimal postoperative management is still controversial [17]. Even in the presence of high level evidence of adjuvant hormone therapy [18,19], several studies showed favorable long-term outcomes for selected patients without adjuvant hormone therapy in these groups [8,11,20]. In addition, the recent EAU-ESTRO-SIOG guidelines described that improving local control with early adjuvant hormone therapy combined with adjuvant radiotherapy appears beneficial in node-positive PCa patients treated with an ePLND [1]. Men with minimal-volume nodal disease (≤ 3 LNs) and pathologic GS 7-10 and pT3-4 or R1 as well as men with 3-4 LN appear more likely to benefit from combined therapy after surgery [21]. Notably, the authors described that the very low risk group (≤ 2 LNs, GS 2-6) did not benefit from combined therapy. For such patients, early postoperative management may be deferred until the development of recurrence or clinical progression. Accordingly, potential overtreatment and related adverse events are not issues for these patients. The potential benefit of adjuvant therapy on survival outcomes might differ depending on the primary PCa tumor characteristics. Not all node-positive patients share the same long-term prognosis. Consequently, risk stratification and identification of potential candidates for adjuvant therapy is necessary in an optimum postoperative management strategy.

Presently, PSA persistence was significant predictive factor for radiographic PFS (Table 2 and Fig 1). Wiegel et al. [13] showed that patients with undetectable PSA after RP followed by a surveillance or received adjuvant radiotherapy with 60Gy had a better prognosis including recurrence-free survival, metastasis-free survival, and overall survival in comparison with those who had a detectable PSA followed by immediate salvage radiotherapy with 66Gy. Bianchi et al. [6] also reported that node-positive patients with PSA persistence (PSA ≥ 0.1 ng/ml 6 weeks after surgery) showed less favorable outcomes over time. The authors suggested that risk stratification of node-positive patients based on early PSA value after surgery is helpful to identify patients who may benefit from early adjuvant therapies. Multi-institutional large retrospective or prospective studies should be conducted to ultimately allocate patients individually to the appropriate treatment strategy.

In the current study no significant differences were evident between patients with or without PSA persistence in terms of the first site of radiographic progression: local (prostatic bed, 18.6% vs. 20.0%, respectively), pelvic LNs (12.5%, vs. 20.0%, respectively), and distant (skeletal and/or visceral, 68.8% vs. 60.0%, respectively) (all p > 0.05, Table S1). This is consistent with a prior description of no significant differences in the first site of relapse; local, pelvic LNs, retroperitoneal LNs, and systemic (skeletal and/or visceral metastases) in 9%, 28%, 12%, and 51%, respectively [6]. Notably, both studies showed concordance in terms of recurrence pattern, with over 50% of patients harboring distant metastases. However, a substantial number of patients also experienced local recurrence or pelvic LNs metastases. The data support the view that further lymphatic dissemination occurs in some node-positive patients [22].

The current study has several limitations. Due to the retrospective nonrandomized design, the extent of PLND and was at the discretion of the individual clinicians, not using standardized approaches. A previous systematic review and meta-analysis showed a significant difference in BCR between ePLND and sPLND in PCa patients; thus, ePLND could be an oncological benefit [23]. Also, the rate of PLND was relatively lower than other studies [24-26]. It might be derived from a large portion of robot-assisted laparoscopic RP (RARP) in our study population (32/96, 33.3%, Table 1). As known by previous studies [24-26], the rate of PLND was significantly lower in RARP than open RP (17% vs. 83% for laparoscopic RP/RARP vs. open RP, respectively, p<0.001) [25]. In addition, due to the small number of patients, significant differences could not be discerned according to the adjuvant therapy strategies between the two groups (Table 1). Notably, only 20 (21.5%) patients had received combined therapy (ADT with adjuvant radiotherapy). Of patients with PSA persistence, 7 (14.3%) patients had never received adjuvant therapy; conversely, majority of patients with no PSA persistence received adjuvant therapies (Table 1). However, our study cohort had a long-standing history of PCa (>10 years). Consequently, this reflects the real-world clinical practice of a single tertiary institution. Further analyses involving large multi-institutional cohorts are needed to show the differences between the two groups in terms of potential benefit, or even harm from related adverse event after early combined adjuvant therapies.

In conclusion, Early PSA assessment at 6-week after surgery has an important prognostic value for predicting radiographic progression in node-positive PCa patients. Risk stratification based on the early PSA value after surgery would be one of the potential surrogate markers to identify patients who may benefit from early adjuvant therapies.