Methods: Clinical charts of ovarian cancer patients treated and followed from 2004 to 2015 were checked for inclusion and exclusion criteria. Clinical and pathological data were recorded in an electronic separate, anonymous, password-protected database. All relevant data were extrapolated and used for final analysis.

Results: A population of 265 ovarian cancer patients was analyzed in this study. 121 (45.6%) patients presented blood type 0, 112 (42.3%) had blood type A, 23 (8.7%) B and 9 (3.4%) AB. A significantly lower percentage of death (8.7%) in patients with blood type B in comparison with patients presenting different genotypes (group 0: 34.7%, group A: 32.1%, group AB: 22.2%) was found. In invasive serous ovarian cancer patients the analysis showed a 5 fold significant reduction of the risk of death in patients with B genotype. However, postoperative residual tumor resulted the most important prognostic factor for overall survival.

Conclusions: AB0 blood group might be a preoperative prognostic factor in epithelial ovarian cancer patients. According to the literature, postoperative residual disease remain the most important prognostic factor also in our study.

Epithelial ovarian cancer (EOC) is the most lethal gynecological malignancy, 238,700 new cancer cases and 151,900 cancer deaths worldwide were recorded in the 2012 [1]. EOC represents the eighth cause of death for tumor in the women worldwide [1]. In the 2016, the Italian Association of Cancer Registries reported 5,200 new cancer cases and 3,302 cancer deaths [2]. Five years overall survival (OS) is of 45% [3] because EOC is usually diagnosed at advanced stage and no specific symptoms or diagnostic tools are available for early diagnosis [3,4]. When EOC is limited to the ovary (stages IA and IB), 5 years OS raise to 92%. However, only 15% of all EOC are found at this early stage [3] therefore EOC diagnosis is usually characterized by severe physical and psychological sequelae [5]. Border line ovarian tumors (BOT) are less aggressive of EOC and affect women younger than those affected by EOC. Usually, BOT require only a surgical therapy and are characterized by a good prognosis.

Several new prognostic factors in EOC have been investigated such as tumor suppressor protein 53 (p53), oncogenes epidermal growth factor receptor (EGFR), human epidermal growth factor receptor 2 (HER-2/neu), B-cell lymphoma 2 (Bcl-2), haptoglobin, but results of a recent meta-analysis showed that these biomarkers do not have a strong direct relationship with survival, although likely their respective pathways do influence patients prognosis [6, 8, 9].

Recently, meta-analysis confirmed that non-0 blood types are associated with significantly increased risk of gastric and pancreatic cancer [12-15], on contrary, for the other malignancies, data are inconsistent [13].

Since fifties, also the interaction between AB0 blood group and EOC has been investigated by several studies [16-31] but frequently conflicting results have been published (Table 1).

Here, we investigated the association between AB0 blood group with both BOT and EOC in the patients consecutively surgically treated at our department from 2004 to 2015.

The study was designed following the Strengthening the Reporting of Observational Studies in Epidemiology (STROBE) statement [32]. The Local Ethical Committee approved the study design and all patients provided written informed consent to use personal non-sensitive data at hospital admission.

Clinical charts of BOT and invasive epithelial ovarian cancer (EOC) patients treated and followed at the IRCCS - Santa Maria Nuova Hospital of Reggio Emilia (Italy) from 2004 to 2015 were checked for inclusion and exclusion criteria.

Clinical and pathological data were recorded in an electronic separate, anonymous, password- protected database. All relevant data were extrapolated and used for final analysis.

Patients with histological diagnosis of BOT and EOC who received adequate treatment were electively included in the protocol study. Exclusion criteria were: histological diagnosis of benign ovarian tumor, inadequate EOC management according to internal and international guidelines [33-35], an age less than 18 years, non-Caucasian ancestry, a follow-up length less than of 6 months, inadequate follow-up according to internal guidelines, absence of written informed consent, diagnosis of a previous or concurrent cancer(s) and unavailable follow-up data.

An “adequate” management was considered as follows: in apparent early stage BOT a total extrafascial hysterectomy (TEH) with bilateral salpingo- oophorectomy (BSO) infracolonic omentectomy, multiple peritoneal biopsy and peritoneal washing was the standard staging procedure; appendectomy was performed in case of mucinous histotype; whereas additional procedures such as radical omentectomy, pelvic and paraaortic lymph node dissection were performed in case of early stage EOC. In case of BOT with multiple implants or advanced EOC a debulking surgery with excision of all macroscopic disease was performed. In these cases additional procedures such as bowel resection, spelenectomy, liver resection, diaframmectomy, peritonectomy were performed. Adjuvant chemotherapy should be administered to early stage suboptimally staged patients and to those at early stage optimally staged patients at higher risk of recurrence such as stage 1B/C grade 2/3, any grade 3 or clear-cell histology [33-35]. Moreover, chemotherapy is recommended for all patients with FIGO stage II-IV disease post-surgery. Standard chemotherapy consists of a combination of paclitaxel 175 mg/m2 and carboplatin AUC 6-5, both administered intravenously every three weeks for six months [34,35]. Since 2013 anti-angiogenic therapy was added to the standard therapy for FIGO stage IIIb-IV. Bevacizumab was offered at 7.5 mg/kg IV repeated every three weeks for six cycles and continued for up to 12 additional cycles [34,35]. Women affected by severe comorbidity or unresectable disease at upfront surgery were submitted to neoadjuvant chemotherapy. Neoadjuvant chemotherapy consisted of 3/4 cycles of combination of paclitaxel and carboplatin. A follow- up was defined “adequate” in case of adherence to the following schedule: physical and gynecological examination, and transvaginal ultrasound every 12 months, CA 125 evaluation and chest/abdominal/ pelvic computed tomography scan every 6 months for 5 years.

The same pathologists with long-time expertise in gynecological oncology reviewed all the histological samples in order to confirm formally the diagnosis.

In table 2 the distribution of AB0 groups was investigate in association with principal clinical and pathological characteristics of patients. Interestingly we observed a significantly lower percentage of death (8.7%) (p= 0.024) in patients with blood type B in comparison with patients presenting different genotypes (group 0: 34.7%, group A: 32.1%, group AB: 22.2%).

To better investigate the relation between B group and risk of death in ovarian cancer patients we excluded BOT and performed an OS analysis focusing on 224 EOC and subsequently on a subgroup of 176 more aggressive serous invasive tumors because no significant correlation was found with histotypes other than serous (data not shown). In all EOC and particularly in serous EOC the analysis confirmed the protective role of B genotype in EOC risk, showing about a 5 fold significant reduction of the risk of death (Table 3, Fig. 1).

Further analyses were focused on the serous invasive tumors and a univariate and multivariate survival analysis including the principal clinical and pathological characteristics of these patients were included. (Table 4). As expected, in univariate analysis, in addition to blood group, age, neoadjuvant therapy and presence of residual tumor after surgery resulted the principal parameters influencing OS of serous EOC patients.

A bootstrap approach (b=1000) was used to perform an internal validation of the univariate association between AB0 group and OS. Analysis conducted on total population (p=0.022), EOC (p= 0.049) and serous invasive EOC (0.084) confirmed the significant effect of blood groups on the risk of death.

Because the evident effect of the presence of residual tumor (RT) on patients survival two different model of multivariate analysis were considered. In model 1 postoperative RT and neoadjuvant therapy were excluded from the analysis and a significant, independent effect of blood group B (Hazard ratio (HR)=0.20, P adjusted=0.041) and age (HR=1.04, P adjusted=0.015) on the risk of death in serous EOC was confirmed. In model 2 of multivariate analysis the presence of postoperative RT resulted the most important prognostic factor for OS (HR=3.54, P adjusted= 0.004) and both blood group and neoadjuvant therapy loss their significant effect.

Analysis of association between blood groups and clinical and pathological characteristics of patients with BOT and EOC.

The analysis was performed on total study population (BOT+EOC) and on patients with only EOC and only serous EOC.

How AB0 antigens may influence EOC prognosis is not well established. AB0 antigens are expressed on many cell types including platelets, vascular endothelial cells, epithelial tissues, mucus secretions [12] and tumor cells. Moreover, A antigen can be detected also in tumor cells from non-A individuals. A dysregulation of the enzymatic activity of the AB0 glycosyltransferases, can lead to conformational changes in proteins, such as the epidermal growth factor receptor or alter immune recognition of natural killer cells which are specifically involved in the processes of intercellular adhesion and cellular membrane signaling as well as in the immune response to the host [37-39]. These are all conditions that favor tumorigenesis [40].

Recently, studies reported an association between polymorphisms at the AB0 gene locus and circulating levels of tumour necrosis factor-alpha, soluble intercellular adhesion molecule (ICAM)-1 [41]. ICAM-1 is used by cancer cells for adhesion to endothelial cells and subsequent metastatisation [42], the decreased soluble ICAM levels in patients with A blood group may promote metastatic spread of tumours [15].

The AB0 gene is located on chromosome 9q34 encodes glycosyltransferases, which is frequently lost in EOC [43, 44]. The gene encodes for glycosyltransferases, which catalyze the step-by-step transfer of nucleotide donor sugars to the H antigen to form the A and B antigen [44]. Aberrant glycosylation represents a hallmark of cancer development and progression [45]. Thus, some authors hypothesized that patients with blood type A have impacted tumor cell invasion and immune responses of EOC cells and more susceptible to disease failure [18].

Moreover, AB0 blood group antigen expression on cancer cells is modified by hypermethylation of AB0 gene promoter [46], which might be related with the tumor invasion and metastasis. The number of methylated gene promoters increased with age [47, 48], which may partly explain the reason for patients with age > 50 years had worse OS [18].

In a previous study [18] on 256 EOC patients, blood group antigen A was associated with a significantly worse OS at multivariate analysis, but only patients without RT were analyzed. 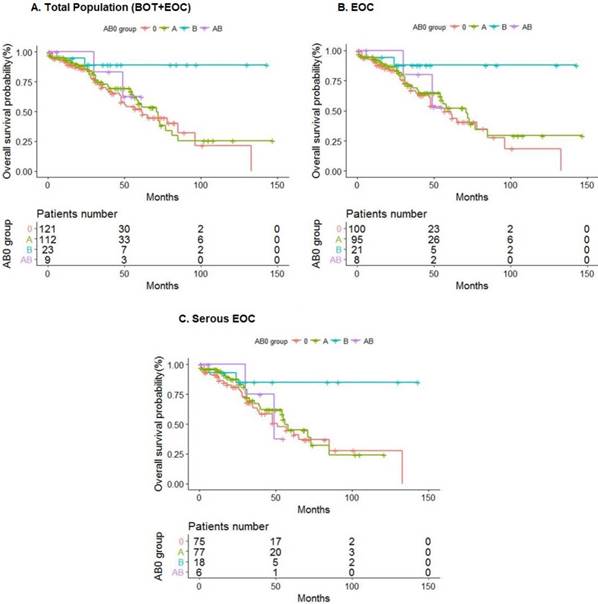 Our findings confirm data coming from a recent multi-centre study [31] in which blood group antigen B was associated with a prolonged survival in patients with serous or undifferentiated EOC but this effect was not independent from standard prognostic parameters in multivariate analysis [31]. Differently from the latest studies [18,31], we investigated also BOT in the total population (Fig.1a).

Most previous studies have potential flaws [17], relied on self-reported blood group [18], showed a tendency to over-report the less common blood groups [15], had lack of adjustment for potential confounders, such as age and race and postoperative RT [18, 21].

In our study we included only patients with blood group assessed at our hospital, AB0 frequencies were comparable to the common population, oncologic outcome were similar to that reported in literature, we tested the impact of AB0 blood group for all well know prognostic factors such as age and postoperative residual tumor. A single-centre study guarantees uniformity in surgical/medical treatment, pathological evaluation and management of patients. On contrary, the main limitation of the present study is the small sample size.

Considering the wide distribution of AB0 antigens on several cells and secretion and the several cellular functions based on AB0 antigens, it is unlike to exclude a function of AB0 in cancer risk and development. Despite several plausible mechanisms are reported to justify the link between AB0 and cancer, only gastric and pancreatic cancer showed a clear link [12, 15], on contrary EOC is still under investigation. A blood group is the most reported to be associated with EOC risk and poor OS, B blood group seems to be associated with a better OS in our study. AB0 blood group is present in all population, is easy and cheap to test and might represent a useful prognostic factor to use in the preoperative evaluation. Largest cooperative study should be planned to obtain a likely answer.

28. Cozzi M, Gualandri V. On the relations between blood groups of the ABO system and neoplasms of the female genital system. I. Ovarian carcinoma. Minerva Ginecol. 1967;19:968-72

39. Hakomori S. Antigen structure and genetic basis of histo-blood groups A, B and O: their changes associated with human cancer. Biochim Biophys Acta. 1999;1473:247-66