Background: Peritoneal metastasis (PM) is the most common cause of death in gastric cancer (GC) patients. However, diagnosis of PM is still difficult in clinical practice. This study aimed to explore the diagnostic and prognostic value of digital rectal examination (DRE) in GC.

Methods: 247 GC patients with PM confirmed by operation were included. The diagnostic yield of DRE compared with computed tomography (CT) was calculated. In another group of 1330 cases receiving radical gastrectomy, 38 cases with DRE (+) postoperatively were analyzed to identify risk factors. A nomogram was constructed to predict postoperative DRE (+).

Conclusions: GC patients with DRE (+) could be regarded as a special subtype of stage IV ones with poorer prognosis. Supply of palliative care and chemotherapy rather than unnecessary operation might be a better alternative for these patients. DRE was an effective supplement for CT and should be generally recommended for GC patients.

Gastric cancer (GC) is the second most common cause of cancer-related mortality worldwide, especially in many Asian countries[1-3]. Peritoneal metastasis (PM) is the most common cause of death in GC patients. A major problem in treating PM is how to detect metastasis early so as to stage accurately and select appropriate treatment[4].

Currently, laparoscopy is regarded as an effective diagnostic tool for PM, which can supply a chance to biopsy under vision[5-9]. According to a meta-analysis by Ramos et al, the sensitivity and specificity of staging laparoscopy was 84.6% and 100% [10]. However, the laparoscopic approach remains underused (<10%) due to its invasive procedure, high cost and the possibility of port-site metastasis [10]. In fact, most cases of GC occur in rural areas of developing countries such as China. These areas lack of sophisticated equipment and well-trained surgical teams. Laparoscopic accessibility and availability for PM is very limited.

To date, multidetector computed tomography (CT) scans is the first choice for detecting PM of GC as the preoperative modality[6-8]. CT is widely available in most medical centers because of its less invasion and cost compared with laparoscopy. However, the accuracy of CT is low in identifying PM, even with modern CT techniques[11]. In addition, 18F-fluorodeoxyglucose positron emission tomography (18F-FDG-PET) is also applied to detect PM. However, 18F-FDG-PET is unreliable due to its high cost and low sensitivity, especially for diffuse-type GC[12].

Digital rectal examination (DRE), as a simple, cheap and noninvasive clinical tool available, has been advocated for prostate and rectal cancer detection[13, 14]. DRE is also a useful approach for the diagnosis of anorectal disorders[15]. As PM often appears as mass or hard nodules in the Douglas' pouch or Rectovesical pouch, DRE is often used as one component of the physical examination for GC patients in many hospitals[16]. However, the diagnostic and prognostic value of DRE in GC patients with PM has not been evaluated yet. We supposed the value of DRE was extremely underestimated in accessing GC. Therefore, we designed this study to compare the effectiveness of DRE and CT for detecting PM in GC patients.

1643 GC patients who underwent operation from November 2010 to December 2015 in Sun-Yat Sen University Cancer Center were included in this study. The operations included gastrectomy, bypass gastrojejunostomy and biopsy of metastasis. The overall survival (OS) was calculated from the date of surgery to the date of death or the last follow-up. Median follow-up period was 16 months. The American Joint Committee on Cancer (AJCC) Gastric Cancer Staging version 7 was used for TNM staging[17].

DRE is performed and recorded routinely together with other bedside physical examination in initial interview. At least two experienced surgeons performed DRE and two board-certified radiologists interpreted CT scan for every patient receiving surgery. The surgeons performing the DRE blinded to CT and laparoscopy results. When the two surgeons were not consistent with each other, we found a senior surgeon to make a final decision. PM often appear as mass or hard nodules in Douglas' pouch or Rectovesical pouch, which can not be moved by finger. Serious PM even appear as “frozen pelvic” and rectal obstruction. The abdominal CT scan was performed using a 64-slice spiral CT (Aquilion TSX-101A, Toshiba Medical System, Tokyo, Japan). A standard imaging protocol of imaging process was adopted. The scanning layer thickness was 5mm with a 1-mm pitch, and the scan area included thorax, abdomen and pelvis. Intravenous nonionic contrast material (1.5 ml iopromide per kilogram of body weight, Ultravist 370; Schering, Berlin, Germany) was injected into the antecubital vein at 2.5 ml/s[20-23]. Ascites was defined as four levels by CT imaging: none (<100ml), mild(100-300ml), moderate (300-1000ml) and massive (>1000ml)[24].

In our study, histopathologic result was considered as the gold standard for the diagnosis of PM. The χ2 test was used for categorical variables. The t-test was used for continuous variables. Variables proved statistically significant in the univariate analysis were included into the multivariable logistic regression analysis[25]. Independent risk factors in logistic regression analysis for DRE (+) were assembled into a nomogram. The summary statistic used to evaluate the predictive discrimination of the nomogram was the concordance index (C-index). Possible values of the C-index ranged from 0.5 (random classification) to 1.0 (perfect classification). The calibration curves, which showed the relationship between the predicted and observed risk for each outcome, were generated using 1000 bootstrapping sample. The Kaplan-Meier curve was used for survival analysis.

Statistical analysis was performed by the software statistical package for social sciences version 20.0 (SPSS, Chicago, IL) and R for Windows, version 3.3.3 (http://www.r-project.org/). Nomogram was carried out using the library “rms” in R. P values less than 0.05 were considered as statistically significant.

Clinical characteristics of the study population

The performance of DRE and CT in PM patients

The Clinicopathological characteristics of 247 cases and relationship between the true-positive and false-negative groups were listed in Table 1. By univariate and multivariable analysis, only BMI (p=0.03) had relationship with the positive result of DRE (Table 2).

The clinicopathological characteristics of 247 PM patients

Diagnostic results of DRE and CT

Diagnostic results of DRE and CT in 247 PM patients

Construction of a nomogram to predict postoperative DRE (+)

Subsequently, we found DRE (+) was a useful predictor of GC disease progression. The prognosis of DRE (+) patients was much poorer than other stage IV-DRE (-) cases. This result meant that laparoscopy might be unnecessary to DRE (+) patients since DRE (+) could predicate the prognosis accurately. Unnecessary laparoscopy would increase the length of hospitalization and delay onset of chemotherapy. Particularly, the patients appearing DRE (+) after radical gastrectomy represented much shorter survival [26, 27]. We speculate that exaggerated tumor burden, postoperative dystrophy and chemotherapy resistance may be related with the poor prognosis. 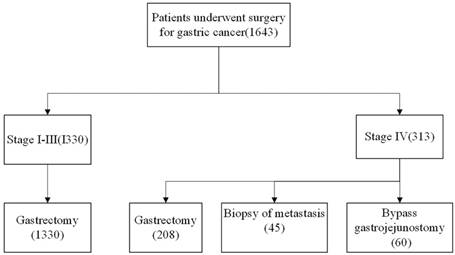 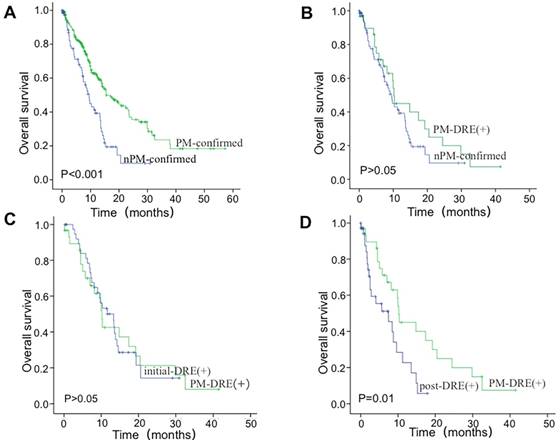 (A) A nomogram to predict postoperative DRE (+) for GC patients who underwent radical gastrectomy. (B) Calibration plots of the nomogram predicting. The calibration plot is a comparison between predicted and actual outcome. The blue 45-degree reference line represents an ideal model perfectly calibrated with an outcome. The red dotted line is the apparent accuracy of the nomogram, without correction for overfit. The back solid line is the bootstrap corrected performance of the nomogram, with a scatter estimate for future accuracy.

Furthermore, age, gender, quantity of ascites, and index of CEA were confirmed as independent risk factors for DRE (+) postoperatively. Similarly, Lee and Asao revealed a quantity of ascites and high index of CEA was highly sensitive in predicting PM in GC[28, 29]. Based these prognostic factors, we established a nomogram for predicting DRE (+), with a bootstrap-corrected C-index of 0.73. Previously, Rose PG et al also evaluated the clinicopathologic factors of cervical cancer and developed a nomogram for predicting pelvic recurrence[30]. The bootstrap- corrected C-index in their study was 0.73, which was consistent with our result. Using our nomogram can predict the postoperative DRE (+) easily, which help to identify asymptomatic GC patients with high-risk features and evaluate adjuvant treatment options more accurately.

Recently, chemotherapy, not unnecessary operation, has been performed for our patients with DRE (+) (data not shown). Strikingly, liver metastases, retroperitoneal lymph node metastases or malignant ascites appear soon for most DRE (+) cases, which indicates that the DRE (+) patients have a poor prognosis. For this subgroup of patients, supply of palliative chemotherapy and pain relief rather than invasive therapy might be a better alternative.

Currently, of 247 patients with PM confirmed, 178 were clarified as P2 and P3, which meant most patients with PM were possible be found by DRE. However, only 31 patients with PM were identified by DRE. The reasons may be related to small size of peritoneal implants, limited space of finger touch and interference of adjacent tissue. Indeed, our findings revealed that patients with high BMI were misdiagnosed more easily. Plenty of adipose tissue in pelvic cavity could interfere with the result of DRE. Marshall and Nikendei also found that the prostate could be examined by DRE completely in 91.7% of patients with a BMI below 25 kg/m2, and in 14.3% of those with a BMI above 40 kg/m2, which was consistent with our results[31, 32]. In addition, a total of 3 false-positive DRE results were found, in which 2 were confirmed as uterine fibroids and 1 was confirmed as prostate nodular hyperplasia intraoperatively. The results indicated that the training of DRE was necessary for physicians lacking the experience.

DRE can be learned quickly with sufficient practice. However, it should be noted that DRE was often underutilized or performed in a perfunctory manner in GC patients. Recently, Wong et al. reported that DRE was decreasing in clinical practice and lots of medical students were not adequately trained to perform DRE[33]. We believe that, meticulous DRE usage and adequate training would provide accurate clinical information for GC patients with PM[33].

To the best of our knowledge, this study is the first to demonstrate that the diagnostic and prognostic value of DRE in GC patients with PM. DRE is an effective supplement for CT since more than half of GC patients with DRE (+) could not been found by CT. Moreover, patients with DRE (+) can be regarded as a special subgroup of stage IV ones with poorer prognosis. Supply of palliative care and chemotherapy might be a better alternative for them. Additionally, based on the risk factors, a nomogram established could predict postoperative DRE (+) more easily. Our Study also underscored the importance to improve awareness of and training for the DRE. As an economic, safe and convenient tool available, DRE should not become a lost art and should be utilized as a routine bedside examination tool for the evaluation of PM, especially for the advanced GC patients.

This study was supported by the Guangdong Provincial Department of Science and Technology Project (Grant No. 2016A020215089). The funder had no role in trial design, data collection, data analysis, data interpretation, or writing of the report.

This study has been approved by the ethics committee of Sun Yat-sen University Cancer Center and have therefore been performed in accordance with the ethical standards laid down in the 1964 Declaration of Helsinki and its later amendments.

17. Edge SBCompton CC. The American Joint Committee on Cancer: the 7th edition of the AJCC cancer staging manual and the future of TNM. Annals of Surgical Oncology. 2010;17:1471