Ovarian cancer is a lethal disease that accounts for 5% of cancer deaths in females in the United States and its mortality is second only to breast cancer. In 2017, there were approximately 22,440 new cases and 14,080 deaths from ovarian cancer in the United States[1]. At present, preferred management of ovarian cancer is comprehensive staging operation, cytoreductive surgery, and subsequent adjuvant chemotherapy[2]. With the development of surgery and targeted drugs, the prognosis of patients with ovarian cancer has been improved significantly, but the 5-year survival rate is still fluctuating at 30%[3]. Therefore, identifying favorable prognostic biomarkers for ovarian cancer is urgently needed to develop novel therapeutic strategies and to improve the clinical outcomes of ovarian cancer patients.

Histone deacetylases (HDACs) are a family of enzymes that participate in mediating the dynamic balance of histone acetylation and deacetylation in cells[4]. Up to now, 18 subtypes of HDACs have been found in mammalian cells and classified into four classes according to their similarity to the yeast HDAC sequence. Class I HDACs include HDAC1, HDAC2, HDAC3 and HDAC8, which are close to the yeast Rpd3 protein. Class II HDACs consists of HDAC4, HDAC5, HDAC6, HDAC7, HDAC9 and HDAC10, which are similar to the yeast Hda1 protein. Class III HDACs, also known as sirtuins, contains SIRT 1-7 because of homologous with yeast transcription factor Sir2 sequence. Interestingly, class IV only has HDAC11[5, 6]. Among them, Class I, II and IV are Zn2+-dependent type, but class III is a Nicotinamide adenine dinucleotide (NAD+)-dependent type[7].

In recent years, HDACs are considered to play an essential role in cell proliferation, differentiation and apoptosis of several cancers[8-10]. Mottet et al. found that HDAC4 was involved in inhibition of p21(WAF1/Cip1) by Sp1/Sp3- rather than p53 binding site. HDAC4 interacted with Sp1 to bind and reduced histone H3 acetylation, indicating that Sp1 plays a key role in HDAC4-mediated p21 inhibition (WAF1/Cip1) [8]. A study reported that knockdown of HDAC1 obviously decreased the proliferation of ovarian cancer cells via downregulation of cyclin A expression, and depletion of HDAC3 inhibited the migration of ovarian cancer cell through augmentation of E-cadherin expression[10]. Over-expression of HDACs is observed in a variety of human malignancies and is linked to clinicopathological parameters and prognosis[11-13]. For example, HDAC4 was obviously higher in late stages of epithelial ovarian cancer tissues compared with early stages[14]. Additionally, enhanced expression of HDAC1 was associated with a shorter disease-specific survival in ovarian cancer patients[15]. Up to now, the prognostic significance of each HDACs subtype in ovarian cancer remains unclear. Because the functions of most class III HDACs (SIRT1-7) remain to be elucidated, in the present study, we first entirely investigated the prognostic values of class I, II and IV HDACs members (HDAC1-11) in ovarian cancer patients by Kaplan-Meier plotter database.

The Kaplan-Meier plotter database (www.kmplot.com)[16] was used to analyze the correlation between each HDACs mRNA level and prognosis of ovarian cancer patients. In this database, gene expression and clinical data of lung cancer[17], ovarian cancer[18], gastric cancer[19], and breast cancer[20] were included. In addition, the clinical data of ovarian cancer patients contained grades, stages, histology and TP53 mutation status. Currently, it has been widely used to analyze the clinical effect of individual genes on overall survival (OS) and progress free survival (PFS) of cancers.

OS of 1656 patients and PFS of 1435 women with ovarian cancer were assessed in Kaplan-Meier plotter database, and the eleven HDACs genes (HDAC1-11) were loaded into the database. Then, patient samples were divided into two groups by median expression (high vs. low expression) and were investigated by a Kaplan-Meier survival plot. The hazard ratio (HR) with 95% confidence intervals (CI) and Log rank p-value were calculated automatically on the webpage. If HR and 95% CI were more than 1, the gene was considered as a poor prognostic indicator of ovarian cancer. If 95% CI was less than 1, the gene could be a better prognostic indicator. If 95% CI includes 1, the gene was identified that it had no correlation to the prognosis in ovarian cancer. The relationship between HDACs mRNA level and other clinicopathological parameters including histology subtypes, clinical stages, grades and TP53 mutation was accessed. P value of < 0.05 was considered to be statistically significant. 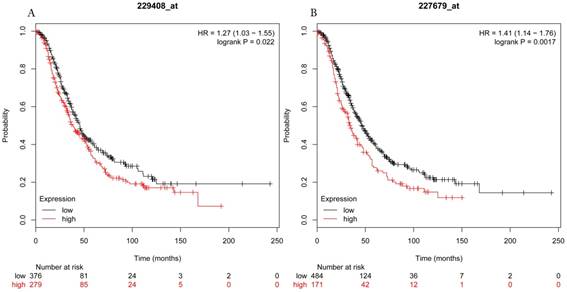 In many human cancer cells, such as ovarian cancer, pancreatic adenocarcinoma and osteosarcoma, HDAC4 specifically dysregulated cell cycle and led to the development and progression of tumors[13, 14, 28]. In the human glioblastoma model, tumor growth was inhibited in vitro by downregulating expression of HDAC4-mediated p21(WAF1/Cip1)[10]. The accumulation of HDAC4 induced by fibrillar collagen matrices in the nucleus through co-localization of PP1α, resulted in reduction the expression of p21 and promoted the proliferation and migration of epithelial ovarian cancer cells in turn[14]. Besides, HDAC4 expression in epithelial ovarian cancer tissues was obviously higher in late stages of carcinoma than early stages[14]. Ahn et al.[29] found that histone deacetylase inhibitor, apicidin suppressed the growth of transplanted ovarian cancer cells by down-regulating HDAC4 and MMP-2. All these evidences pointed out that HDAC4 was involved in ovarian cancer progression. However, the prognostic role of HDAC4 in ovarian cancer is unknown. According to our results, augmented HDAC4 mRNA expression was correlated to unfavorable outcome in all ovarian cancer patients. Notably, poor PFS was related to late stages, poor differentiation and serous ovarian cancer, while adverse OS was only associated with poor differentiation and serous ovarian cancer.

HDAC5 was reported to lead to the dysregulation of cell proliferation and apoptosis in different cancers[30]. Watamoto et al. put forward that control of the HDAC5 nucleocytoplasmic distribution might be related to murine erythroleukemia cell differentiation possibly via regulation of GATA-1 transactivation[31]. Some data showed that high HDAC5 expression was associated with an poor prognosis for various types of cancer patients including hepatocellular cancer[32], breast cancer[30] and medulloblastoma[33]. Currently, there are no available studies about the prognosis of HDAC5 in ovarian cancer. Our results supported that enhanced HDAC5 expression might indicate worse prognosis of ovarian cancer patients, particularly for poor differentiation and serous patients but better outcome of early stages patients. Besides, HDAC5 mRNA expression was associated with poor PFS for TP53 mutation ovarian cancer patients. 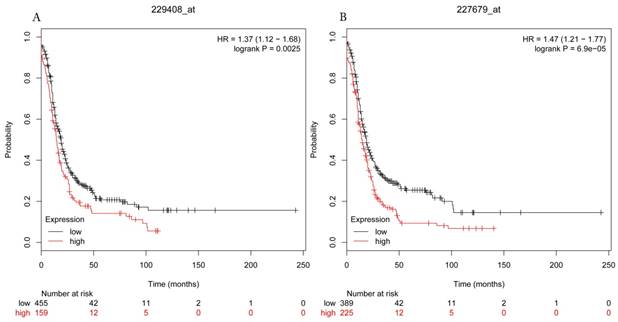 HDAC11, the only member of class IV histone deacetylase, is not only involved in cell division regulation, nervous system development, but also plays an important role in physiological and pathological process of tumor[34-36]. HDAC11 silencing in MYCN-driven neuroblastoma cell lines dramatically induced cell death possibly mediated by apoptotic programs[36]. Wang et al. reported that a negative correlation between the expression of HDAC11 and p53 in pituitary tumors and HDAC11 interfered with p53 expression in pituitary tumor cells to regulated its apoptosis[37]. Feng et al. found that HDAC11 might be involved in breast cancer progression[38]. But Lucio-Eterovic et al. showed that HDAC11 inhibited the development of nervous system tumors[39]. Other study revealed that HDAC11 was expressed at a higher level in Hodgkin Reed-Sternberg cells and had a borderline relationship with the OS in classical Hodgkin lymphoma patients[40]. To date, no data is related to the prognostic role of HDAC11 in gynecological malignancies. Our result first reported that HDAC11 was a poor prognostic biomarker for ovarian cancer patients, particularly in late stages, poor differentiation, TP53 mutation and serous ovarian cancer patients.

This work was sponsored by Key Lab of Wenzhou city-Gynecological Oncology.