Purpose: Oncolytic adenoviruses emerge as new agents for cancer therapy. This study aimed to investigate the synergistic anti-tumor activity of oncolytic adenovirus armed with IL-24 (ZD55-IL-24) and docetaxel (DTX) on advanced prostate cancer in vitro and in vivo.

Results: DTX did not affect ZD55-IL-24 replication and IL-24 expression in DU145 cells. In vitro, the combination of ZD55-IL-24 and DTX showed synergistic inhibitory effects on prostate cancer cell viability and invasion. In vivo, ZD55-IL-24 and DTX synergistically inhibited the growth and activated the apoptosis of DU145 xenografts, accompanied by significantly decreased PARP-1 levels and increased caspase-3 and caspase-8 levels as well as decreased CD31 expression.

Conclusion: We reported the synergistic anti-tumor efficacy of ZD55-IL-24 and DTX on prostate cancer. Our results suggest that chemotherapy combined with oncolytic adenovirus mediated gene therapy is a promising strategy for the treatment of advanced prostate cancer.

Oncolytic adenovirus has gained increasing attention as a novel anti-tumor agent due to many advantages, such as selective replication in malignant cells and the lysis of targeted cells via the induction of primary cell death, the activation of anti-tumor immunity and bystander effects [12,13]. Our previous study showed that inserting IL-24 into E1B-55 gene-deleted oncolytic adenovirus ZD55 had stronger anti-tumor effect than that of ZD55, and ZD55-IL-24 had no toxicity to normal cells [14]. In this study, we evaluated the synergistic anti-tumor effect of oncolytic adenovirus ZD55-IL-24 and chemotherapy agent docetaxel in prostate cancer. We further explored the underlying mechanism to provide a potential strategy for the clinical therapy of prostate cancer.

DU145 cell line and HEK393 cell line were provided by Institute of Biochemistry, Chinese Academy of Sciences and were cultured in RPMI-1640 and DMEM medium, respectively, supplemented with 10% fetal bovine serum (Gibco, MA, USA) and 1% penicillin/streptomycin (Gibco), maintained at 5% CO2 and 37℃ in a humidified incubator. Docetaxel (DTX) was obtained from the Jiangsu Hengrui pharmaceutical and stored at 4℃.

DU145 cells were seeded in 96-well plates with 3,000 cells per well. Then the cells were treated with different concentration of docetaxel and different titers of ZD55-IL-24. Then every 24 h, 20 uL MTT (Amresco, stock solution 4 mg/mL) was added to each well and incubated at 37°C for 4 h. Then the supernatants were discarded and the remains were dissolved in 100 uL DMSO (Amresco). After shaking for 15 min, the well was measured at wave length 490 nm by Microplate Reader (Thermo scientific, MA, USA).

Cells were seeded in 6-well plates with 1×106 cells per well. The cells were treated with DTX (1 ng/ml) and/or ZD55-IL-24 (10 MOI). 24 h later, the cells were harvested and seeded into the upper chamber precoated with Matrigel at 1×105 cells per well. 700 ul RPMI-1640 medium supplemented with 10% serum were added to the lower chamber. After 24 h incubation, the cells remained on the upper surface of the filters were wiped by cotton swabs and the cells on the filters were fixed, stained with crystal violet, and the cells in five randomly selected fields were counted under a microscope.

Cells or tumor tissues were lysed and the proteins were extracted and separated by SDS-PAGE. Then the proteins were transferred to PVDF membrane and incubated with antibodies for caspase-3, caspase-8, PARP-1, cleaved PARP-1, IL-24, E1A and GAPDH (Abcam, UK) at 4°C overnight. Membranes were incubated with secondary antibodies for 2 h. Finally, the protein bands were tested by ECL reagents according to the instructions. The gray value of the bands was analyzed with Image-J software.

Xenograft tumor tissues were dissected and fixed in 10% formalin, then were embedded and cut into 5 μm sections. The samples were deparaffinized, hydrated, stained with hematoxylin-eosin, then mounted using neutral resin. For immunohistochemical staining, endogenous peroxidase was quenched by 3% hydrogen peroxide and the sections were blocked with 2% goat serum at room temperature for 30 min, then incubated with antibodies for caspase-3, caspase-8, PARP-1, and CD31 (Abcam, UK) at 4°C overnight. The staining was detected using DBA kit (ZSGB-Bio, Beijing, China) and observed under a light microscope (Nikon DS-Ri1, Japan), the staining was quantified by Image J software.

Apoptotic cells in tumor tissues were quantified using in situ apoptosis detection kit (KeyGenBio, Nanjing, China) following the manufacturer's protocol. The nucleus were counterstained with DAPI. The apoptotic cells were observed under fluorescent microscope and cells in five randomly selected fields were counted.

The data are expressed as mean±SD and analyzed by SPSS16.0 software. T-test or one-way ANOVA was used to compare the difference. P<0.05 was considered statistically significant. 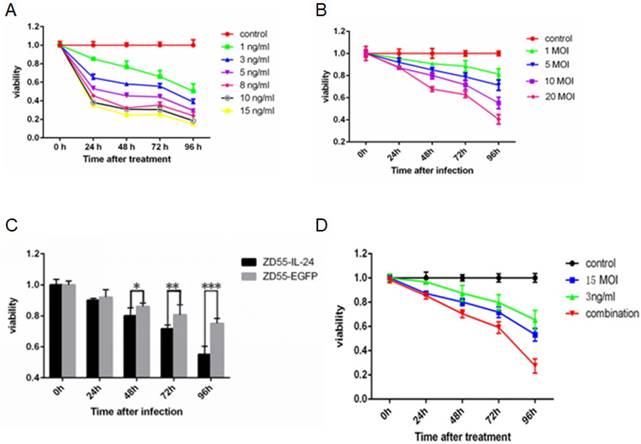 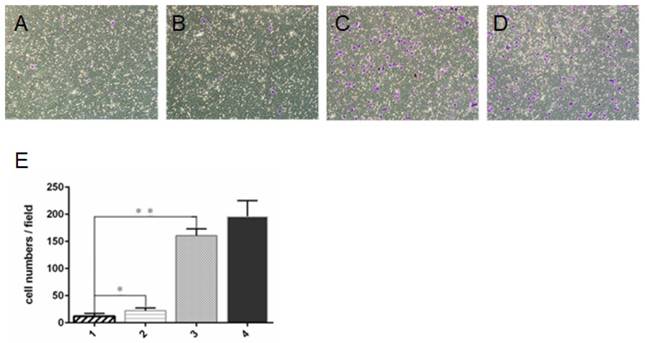 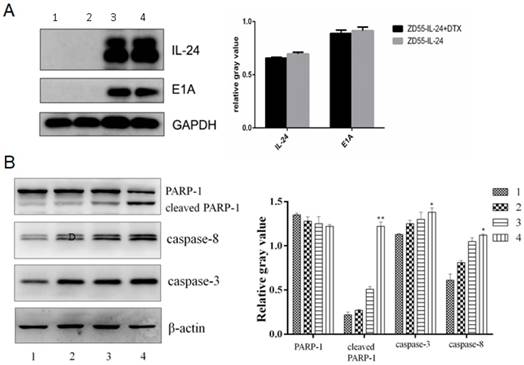 Currently, how to establish high efficiency and low toxicity combination therapy for prostate cancer is a big challenge. In recent years, oncolytic virotherapy has shown promise and has been used in clinical practice [14]. However, currently the administration of oncolytic virus is limited to intratumoral injection, because intravenous administration is easy to produce antibodies against the virus. Therefore, clinical trials of oncolytic viruses are limited to superficial tumors such as head and neck cancer [15]. Due to special anatomical structure of the prostate, viral particle can be accurately injected into prostate cancer lesions guided by ultrasound in phase I clinical trials [16,17]. However, oncolytic virus has limited anti-tumor effect when used alone and the combination with chemotherapy can achieve a better outcome [18-20]. ZD55-IL-24 is an engineered conditionally replicative oncolytic adenovirus which has shown anti-tumor effect on colon cancer, lung cancer, and pancreatic cancer [21,22]. 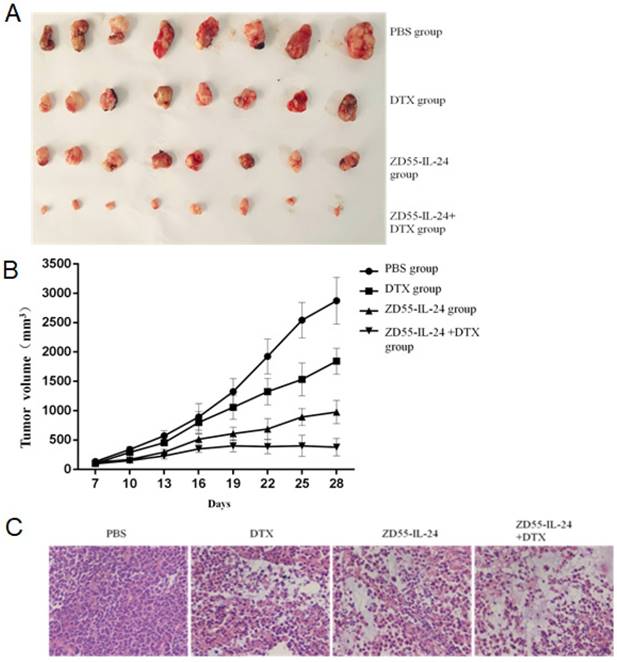 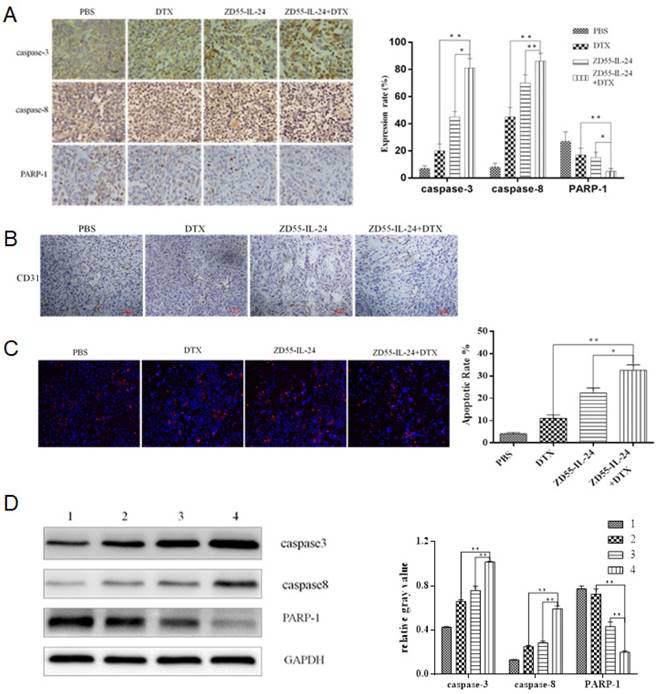 CD31 (platelet endothelial cell adhesion molecule-1, PECAM-1) is expressed in blood vessels and lymphatic endothelial cells, and participates in angiogenesis and tumor metastasis [23]. Thus we examined CD31 expression in prostate cancer xenograft and found that CD31 expression was inhibited at a greater extent in the combined treatment group compared to single treatment group. These results suggested that ZD55-IL-24 plus DTX could inhibit the angiogenesis of prostate cancer.

The induction of apoptosis is an important mechanism of anti-cancer therapy. To elucidate the mechanism by which combination therapy achieved better anti-tumor efficacy, we examined apoptosis and the expression of apoptosis related proteins. The proteins that regulate apoptosis mainly consist of three families: Caspase family, Bcl-2 family and IAPs family [24,25]. Among them, cysteine-aspartic acid protease (caspase) family is a protease system that directly leads to the disintegration of apoptotic cells [26]. Caspase family includes many members such as caspase-3, caspase-8 and caspase-9 which play important role in the execution of apoptosis. Activation of caspase-8 stimulates exogenous apoptotic pathway mediated by death receptor, while activation of caspase-9 stimulates endogenous apoptotic pathway mediated by the mitochondrial. Caspase-3 is a downstream effector protein, and once it is activated a cascade reaction occurs. PARP is the downstream effector protein of caspase. Increased cleavage of caspase-3 has been shown to increase the sensitivity of prostate cancer to DTX [27]. In this study, we found that DTX combined with ZD55-IL-24 significantly decreased PARP-1 levels and increased caspase-3 and caspase-8 levels in vitro and in vivo, compared to single treatment. Furthermore, TUNEL assay showed significantly higher apoptosis rate in tumor tissues treated by DTX combined with ZD55-IL-24 than in tumor tissues treated by DTX or ZD55-IL-24 alone.

In conclusion, this is the first report on the synergistic anti-cancer activity of ZD55-IL-24 plus DTX on advanced prostate cancer. Our results suggest that chemotherapy combined with oncolytic adenovirus mediated gene therapy is a promising strategy for cancer therapy.

This study was funded by grants from Jiangsu Province Science Foundation (No. BK2007032), Project of Invigorating Health Care through Science, Technology and Education, and Jiangsu Provincial Medical Youth Talent.