Background: This ex-vivo study was performed to compare the impact of doxorubicin vs. liposomal doxorubicin on penetration depth in peritoneal tissue during Pressurized Intra-Peritoneal Aerosol Chemotherapy (PIPAC) via microcatheter (MC).

Methods: Fresh post mortem swine peritoneum was cut into proportional sections. One group of samples was treated with PIPAC with Doxorubicin (D), and the other was treated with PIPAC with liposomal doxorubicin (LD). Tissue specimens were placed as follows: at the bottom of the plastic box (1), at the side wall (2), at the top cover (3) and the side of the box covered by a plastic tunnel (4). In-tissue doxorubicin penetration was measured using fluorescence microscopy on frozen thin sections.

Conclusion: Our data indicate that liposomal coating of doxorubicin and possibly other chemotherapeutical drugs might inhibit their interaction with the peritoneal surface. This inhibition appears to be relatively strong, since doxorubicin is partially undetectable due to liposomal coating. Further studies are warranted to investigate this interaction and its potential benefit in peritoneal applications.

Pressurized Intraperitoneal Aerosol Chemotherapy (PIPAC) has been introduced as an innovative approach to improve the treatment of advanced peritoneal metastasis (PM). The drug containing solution is delivered into the abdominal cavity in the shape of microparticles using an aerosol-producing device [1, 2]. Penetration depth of PIPAC has been reported to be up to 600 µm [3, 4] with tissue concentrations ranging from 0.03 to 4.1 µmol/g [1]. Despite improvements in PIPAC treatment, the overall outcome of patients with PM remains poor. Alternative drug compositions and therapeutic particles are currently being studied for the treatment of PM [5, 6].

To date, there has been no investigation in the performance and behavior of new complex particles during PIPAC. Complex particles might enhance or reduce the overall anti-tumoral effect on PM due to altered interaction with the peritoneal surface. Theoretically, encapsulated doxorubicin in the form of liposomal doxorubicin (LD) might have an increased tissue penetration effect when applied as a pressurized intraperitoneal aerosol with higher cytotoxicity and increased penetration in PIPAC. A Phase I trial by Harrison et al. of LD in cytoreductive surgery and HIPEC showed that LD is well tolerated with encouraging survival rates [7]. Our study is the first to analyze the behavior of a complex heterogeneous particle with regard to its effect following the transformation into an aerosol and its interaction with the peritoneum. The main focus of this study is to investigate penetration and interaction of the LD with the peritoneum by measuring the in-depth tissue penetration of doxorubicin using fluorescent microscopy. Second, this study aims to evaluate the effect of the LD aerosol at different positions within the box model mimicking the abdominal cavity in order to assess whether LD aerosol particles have different physical distribution properties. These could influence local drug availability. To compare the impact of LD, PIPAC was also performed with doxorubicin using the same ex-vivo model.

Since the experiments were performed in an ex-vivo model on commercially available tissue samples, no approval of the Local Board on Animal Care was required. Fresh post mortem swine peritoneum was cut into 12 proportional sections. Two groups were established: In group A samples received PIPAC with doxorubicin (Doxorubicin hydrochloride was purchased from PFS®, 2mg/ml, Pfizer Europe, Sandwich, United Kingdom) while in group B samples received PIPAC with LD (Caelyx®, European trademark of Doxil®, Janssen-Cilag, BHZ0V00). The ex-vivo PIPAC model has previously been described [8-10]. A commercially available hermetic sealable plastic box with a total volume of 3.5 liter, representing the abdominal cavity, was used. In the center of the top cover of the plastic box, a 5 mm trocar (Kii®Balloon Blunt Tip System, Applied Medical, Rancho Santa Margarita, CA, USA) was placed. The nozzle of the microcatheter (MC, Olympus, PW-205V Olympus Surgical Technologies Europe, Hamburg, Germany) was introduced into the trocar. The plastic box was kept at a constant room temperature of 27° degrees Celsius during the whole procedure. Fresh tissue specimen of peritoneum (German land race pigs), each measuring 4.0 x 4.0 x 0.5 cm, were placed at different locations of the plastic box: (1) bottom of the plastic box, (2) side wall, (3) top cover, and at the (4) margin of the aerosol jet covered with a bilaterally open tunnel (Figure 1). The distance between the nozzle of the MC and the bottom of the plastic box was 10 cm. The plastic box was then tightly sealed and a constant CO2 capnoperitoneum of 12 mmHg (Olympus UHI-3, Olympus medical life science and industrial divisions, Olympus Australia, Notting Hill, Australia) was maintained during the entire PIPAC procedure. 3 mg of doxorubicin in Experiment A and 3 mg of LD in experiment B were dissolved in 50ml NaCl 0.9% at room temperature (27°C). The solution was then aerosolized at a speed of 1ml/sec using high manual pressure on a 10 ml syringe. After the aerosol phase, the tissue specimens were exposed to another 30 minutes of aerosolized doxorubicin (exposure phase).

Laparoscopy-assisted ex-vivo experiment on fresh swine peritoneum for investigation of spatial distibution pattern of aerosolized doxorubicin during PIPAC therapy. For better demonstration, the front wall of the ex-vivo PIPAC model has been removed. MC is placed in the center of the top in a 5 mm trocar. A) insufflation tube, B) trocar C) microcatheter. Tissue samples 1, 2, 3 and 4 at different locations of the box. 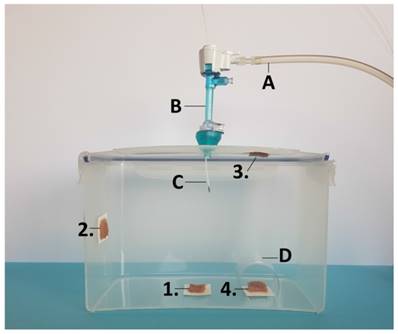 After treatments, all tissue samples were rinsed with sterile NaCl 0.9% solution in order to eliminate superficial cytostatics and immediately frozen in liquid nitrogen. Cryo sections (10 µm) were prepared from different areas of each specimen. Sections were mounted with VectaShield containing 1.5 µg/ml 4',6-diamidino-2-phenylindole (DAPI) to stain nuclei. Penetration depth of doxorubicin was monitored using Nikon Eclipse 80i fluorescence microscope (Nikon Instruments Europe B.V. Amsterdam, Netherlands). The distance between the luminal surface and the innermost positive staining for doxorubicin accumulation was measured and reported in micrometers.

The surface of a representative amount of the peritoneal tissue sample treated with LD was analyzed and visualized via cryogenic scanning electron microscopy (cryo-SEM) Figure 4. Tissue was fixed overnight in 2.5% glutaraldehyde solution in phosphate buffer (pH=7.2). After fixation, sample was washed in phosphate buffer, rinsed in ultrapure (filtered through 0.1 µm syringe filter) deionized water, mounted on cryo shuttle using OCT/ colloidgraphite mixture and plunged in liquid nitrogen. The frozen specimen was then quickly transferred to cryo-preparation chamber (Cryo Quorum PP3010T) and sputtered with conductive layer of platinum at -140°C, followed by its transfer to the microscope chamber maintaining same temperature -140°C (Auriga 60, Zeiss). Sample was observed at 2kV of acceleration voltage using In Lens and SE2 secondary electron detectors.

Experiments were independently performed three times. A total of eight tissue sections per tissue sample were subject to doxorubicin penetration measurement. The statistical analyses were performed via Sigma Plot 12 (Systat Software Inc., California, USA). The Kruskal-Wallis One Way Analysis of Variance on Ranks was used for analyses of independent groups. A significant p-value was considered at p < 0.01.

The applied magnification was 36800x. LD was detected on the peritoneal surface via cryo-SEM (Figure 4). Most particles had a round spherical form. The medium size of particles was at 71 ± 14 nm. Some of the particles accumulated to larger droplets. These were around 0.5 µm to up about 5 µm in diameter. Many stable, undissolved particles and their aggregates could be detected in close contact with the peritoneum. 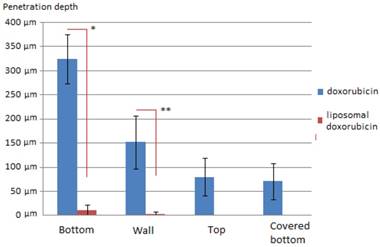 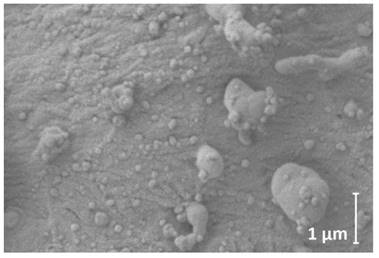 In spite of progress in chemotherapeutic regimens and new drug compositions, poor response to systemic and local treatment is observed in a considerable part of patients, mainly due to molecular mechanisms and limited drug distribution in the tumor [11-14]. PIPAC is a novel approach that promises a valuable treatment option for patients who do not qualify for Cytoreductive surgery and HIPEC. PIPAC therapy has been introduced as a new and innovative approach to improve the treatment of advanced, multi-resistant PM. Data obtained in animal experiments describe a high level of peritoneal tissue penetration rates of applied chemotherapeutic drugs via PIPAC [15-17]. Recent findings demonstrate promising results concerning clinical benefits [18] and histological efficacy on PM [19]. Several authors have reported that increasing tissue penetration enhances the anti-tumoral effect with higher local drug disposition [20, 21]. Performing PIPAC with LD might increase its overall efficacy by means of improving penetration into the tissue. This has been indicated by previously analyzing the effect of LD on HIPEC [6]. Theoretically, LD is assumed to have a higher penetrating effect and leads to higher cytotoxicity after PIPAC, provided how LD interacts with the peritoneal tissue after PIPAC. This interaction seems to be much more complex than anticipated. Studies with different liposomal particles in the peritoneal cavity have indicated that the use of a liposome carrier alters the systemic absorption and tissue distribution in IP therapeutics [22-24]. In our experiment, LD itself does not seem to easily interact with the peritoneal surface unless doxorubicin is released by other means. The reduced penetration of LD as observed in this study may probably be even more complicated by the inability of PIPAC to disrupt the LD structure by mechanical means, preventing the release of encoated doxorubicin. While this study is the first of its kind and gives an important insight into the differences of penetration depth when comparing liposomal vs. conventional doxorubicin in PIPAC, some limiting factors need to be considered. This study uses an ex-vivo box model mimicking the peritoneal cavity. Thus, non-vascularized tissue may have different absorbent properties than peritoneum in an in-vivo model.

In future, the characteristics of LD can be used to create an intraperitoneal LD reservoir from which doxorubicin could be released by other means. It has been determined that these particles are better tolerated and show higher maximal tolerated doses compared to free drug solutions due to slower drug release [25, 26]. Drug release can then be mediated with time or enhanced by ultrasound, hyperthermia or other means as previously described [27, 28]. However, this could be complicated by the fact that intraperitoneal liposomal particles are in partial systemically absorbed. Findings indicate that liposomal particles that are not initially absorbed by the peritoneum will, after some time, be drained by the lymphatic ducts into systemic circulation [29] or finally absorbed at surgical resection sites following cytoreductive surgery [6].

More studies have to be considered since the interaction of complex particles with treated peritoneal tissue has not yet been fully analyzed and evaluated in PIPAC. Although the influence of physical properties in PIPAC has been studied [30], many effects and interactions of new substances are practically unknown. However, we believe that our findings show that application of complex micro and nanoparticles via PIPAC need to be more thoroughly studied before assuming any potential clinical effects. There is practically no data on the application and effect of complex micro and nanoparticles in PIPAC. Nevertheless, the described findings may demonstrate the need for further research in this field.

Our data indicate that LD practically does not penetrate the peritoneum and the release of in-tissue doxorubicin is inhibited by liposomal coating. Liposomal coating has a more complicated effect on the interaction with the peritoneum. These properties might also be used to possibly create a doxorubicin reservoir. For this purpose, it has to be warranted that the reservoir shows no leakage that may be caused by previous tissue resection during cytoreductive surgery or by absorption into lymphatic ducts. Mechanical, thermal and ultrasound-assisted release of doxorubicin might then be utilized for controlled penetration into metastatic tissue. Further studies are warranted to investigate the impact and therapeutic possibilities of LD on tumor cells during PIPAC application and to find out the best possible setting for chemoagent usage in peritoneal metastases.

4. Khosrawipour V, Bellendorf A, Khosrawipour C. et al. Irradiation Does Not Increase the Penetration Depth of Doxorubicin in Normal Tissue After Pressurized Intra-peritoneal Aerosol Chemotherapy (PIPAC) in an Ex Vivo Model. In Vivo. 2016;30(5):593-597