Objective: To evaluate the feasibility and accuracy of machine learning based texture analysis of unenhanced CT images in differentiating subclinical pheochromocytoma (sPHEO) from lipid-poor adenoma (LPA) in adrenal incidentaloma (AI).

Methods: Seventy-nine patients with 80 LPA and 29 patients with 30 sPHEO were included in the study. Texture parameters were derived using imaging software (MaZda). Thirty texture features were selected and LPA was performed for the features selected. The number of positive features was used to predict results. Logistic multiple regression analysis was performed on the 30 texture features, and a predictive equation was created based on the coefficients obtained.

Conclusions: Machine learning-based quantitative texture analysis of unenhanced CT may be a reliable quantitative method in differentiating sPHEO from LPA when AI is present.

The increased incidence of adrenal incidentaloma (AI) is mostly due to advancements in imaging techniques and increases in the volume of cross-sectional imaging carried out. The term AI refers to an incidentally identified adrenal mass greater than 1 cm in diameter during an imaging examination performed for reasons other than the evaluation of adrenal glands. Histologically, the most common AIs are adrenal adenoma (41%-52%), followed by metastatic diseases (19%), adrenocortical carcinoma (5-10%), myelolipoma (9%) and pheochromocytoma (8%) [1, 2]. When selecting optimal adrenal imaging modalities, computed tomography (CT) is one of the most widely chosen tools [3].

An AI is easily identified if it has certain diagnostic features. A cyst presents as a well-defined homogenous round mass without enhancement, and a myelolipoma has macroscopic fat deposits that are detectable on a CT scan. If an adenoma exhibits low density on a plain CT scan with CT attenuation values lower than 10 Hounsfield units (HU), it can be diagnosed with confidence (sensitivity of 71% and specificity of 98%) and is referred to as a fat-rich adenoma [4]. However, it remains difficult for radiologists and surgeons to differentiate some pheochromocytomas from lipid-poor adenomas (LPAs, those with CT attenuation values over 10 HU) because the imaging features for both conditions largely overlap [5-9]. Pheochromocytomas have a variable appearance on imaging, and some atypical pheochromocytomas that lack typical imaging characteristics can be easily misdiagnosed as adenomas, especially as LPA.

Generally, an incidentally detected pheochromocytoma is asymptomatic and termed “subclinical pheochromocytoma (sPHEO)”. Although a sPHEO is usually clinically silent, it maintains secretory function. Failing to differentiate such pheochromocytomas from other tumors before surgery or biopsy may lead to a life-threatening crisis because these interventions may stimulate the tumor and result in an adrenergic storm [5, 9]. Therefore, identifying the possibility of this disease is of vital importance for avoiding potential catastrophic consequences and guiding further treatments. Thus, the ability to distinguish sPHEO from LPA is a worthwhile goal. However, making this distinction in conventional imaging analysis has been impossible thus far.

Quantitative texture analysis (QTA) refers to the process of converting digital medical images into high-dimensional, mineable data via high-throughput extraction of quantitative descriptors, followed by subsequent data analysis and model building for improved decision-making support [10-12]. The recent results of QTA are promising in oncological practice, including tumor discrimination and subtype classification, as well as treatment response assessments [11, 13-16]. To the best of our knowledge, no previously published study has determined whether QTA can be applied to differentiate sPHEO from LPA in AI. Therefore, we wondered whether QTA could play an important role in making this distinction on unenhanced CT scans. The goal of our study was to determine the feasibility and accuracy of using machine learning-based QTA in differentiating sPHEO from LPA in AI on unenhanced CT images.

Ethical approval was obtained from Institutional Review Board of our Hospital, and written informed consents were waived for this retrospective study.

Our study was carried in accordance with relevant guidelines and regulations. Between January 2013 to June 2016, all patients with surgically and pathologically confirmed sPHEO or adrenal adenoma were retrieved from the medical database of our hospital. Inclusion criterion was AI identified during an imaging examination performed for reasons other than the evaluation of adrenal glands. The exclusion criteria were (1) no preoperational CT images available; (2) existing unenhanced CT scan displaying a fat-rich adenoma for patients with adrenal adenoma, (3) adrenal lesion showing enhancement of greater than 100 HU on a CT scan for patients with pheochromocytoma; (4) no enhancement found in the lesion for patients with adrenal adenoma; and (5) CT performed on other machines other than 320-MDCT scanner (Aquilion ONE, Toshiba, Otawara, Japan). According to the inclusion/exclusion criteria (shown in Supplementary files), 80 LPAs (79 patients) and 30 sPHEOs (29 patients) were ultimately enrolled in the present study.

All patients underwent a uniform CT scanning protocol on a 320-multiple detector computed tomography (MDCT) scanner (Aquilion ONE, Toshiba, Otawara, Japan). After routine nonenhanced CT, arterial and portal venous-phase contrast-enhanced CT scans were performed, with fixed delay times of 28 s and 60 s, respectively, followed by intravenous administration of 90 - 100 ml of iodinated contrast material Ultravist 370 (Bayer Schering Pharma, Berlin, Germany) at a rate of 3.0 - 3.5 ml/s for adults and 1.0 - 1.5 ml/s for children using a power injector (Ulrich CT plus 150, Ulrich Medical, Ulm, Germany). The precontrast and contrast-enhanced CT images were reconstructed with a thickness of 1 mm. The scanning parameters are listed in Supplementary table 1.

Images for each patient were reviewed by three abdominal radiologists with 8, 7 and 13 years of experience, who were blinded to patient information, including the pathological diagnosis. The radiologists independently evaluated tumor shape, size, margin and heterogeneity, the presence of calcification and the CT attenuation value of the tumor. The findings were recorded by consensus.

Development of an equation for differentiating sPHEO from LPA

Logistic multiple regression analysis was performed using the 30 texture features selected in the above steps. We ultimately identified 4 texture features with good diagnostic accuracy when combined. Regression coefficients obtained for each texture feature were used to create an equation.

Statistical analyses were performed using SPSS (version 19, IBM), and a P value < 0.05 was considered significant. Quantitative data with a normal distribution are presented as the means ± SD, and the groups were compared using independent Student's t test. Quantitative data with a non-normal distribution are presented as medians (interquartile ranges), and the groups were compared using a Wilcoxon rank-sum test. Patient sex ratios and lesion location ratios between the two groups were compared using a chi-square test. Receiver operating characteristic (ROC) curves were used to analyze the predictive value of every feature and compare the predictive value of the number of positive features and the equation.

Demographic information and CT scan characteristics of the analyzed tumors are presented in Table 1.

Characteristics of patients with LPA or sPHEO

Satisfactory inter- and intra-observer reproducibility of QTA features extraction was achieved. The interobserver intraclass correlation coefficients (ICCs) between reader 1 (first time) and reader 2 ranged from 0.754 to 0.855. The intra-observer ICC between reader 1's twice feature extraction ranged from 0.792 to 0.893. Therefore, the features extracted by reader 1 were selected for subsequent analysis.

A total of 30 texture features were selected from 377 original parameters produced from all patient scans. This resulted in a misclassification rate of 19.39% for differentiating sPHEOs from LPA on unenhanced CT images using LPA (Figure 1). 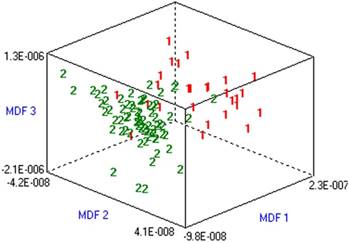 Wilcoxon rank sum tests revealed that all 30 texture features were significantly different between sPHEO and LPA (P < 0.05) (Supplementary table 2). ROC curve analyses of the 30 texture features showed that all features had a good accuracy for making a differential diagnosis of sPHEO and LPA with a concordance rate greater than 80%, except for S(5,5)SumAverg, S(0,5)SumAverg and S(5,-5)Correlat (Supplementary table 3). 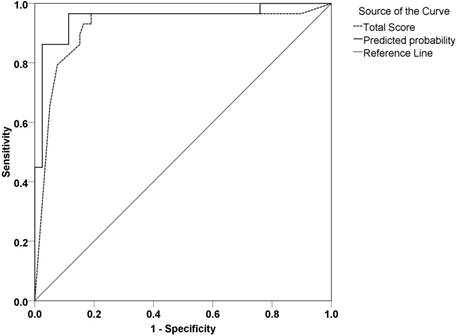 Geo W6, GeoW13, S(5,5)SumAverg, WavEnHL_s-3 and S(0,5)SumAverg were considered positive if their values were less than their cutoff points. For the remaining features, values greater than the cutoff point were considered positive. We used the number of positive features as a predictor. When the number of positive features exceeded 8, the accuracy of prediction was 85.2% (92/108), with a sensitivity of 96.6% (28/29) and a specificity of 81% (64/79) (Supplementary table 4).

Development of a prediction equation

To screen for the most reliable independent features, we performed a logistic multiple regression analysis of the 30 features. The inclusion criterion was a P < 0.010, and the exclusion criterion was a P>0.05. Finally, GeoFmin, GeoS, 135dr_GLevNonU and GeoEr had a good diagnostic accuracy when combined (Table 2). The regression coefficients obtained for each feature were used for the construction of an equation to calculate a value, denoted P, to assess the nature of a lesion based on the given texture feature values:

Predictive effect of the equation

The predictive values of two methods, using the number of positive features or the equation, were compared using ROC curves. The area under the ROC curve for the equation-based method was 0.952 (0.897-1.000), which was slightly greater than that of the method using the number of positive features (0.917, 0.8946-0.988). However, there was no significant difference between these areas (P >0.05) (Figure 2).

Although AI is a common clinical entity [1, 2, 20, 21], it remains challenging to classify AIs if the tumors do not have typical imaging features. Among AIs, sPHEOs have been termed imaging “chameleons” due to their various imaging features that may mimic other lesions, such as LPA [6-8, 22, 23]. CT washout protocols are not reliable for differentiating sPHEO from LPA [6-8, 22]. Moreover, recognizing a sPHEO preoperatively is of vital importance because the presence of a sPHEO does not exclude the possibility of a hypertensive crisis [24, 25]. However, the problem of distinguishing sPHEOs from LPAs remains unsolved. In the present study, we introduce a new method termed machine learning-based QTA, which converts images into higher dimensional data and mines these data, to address this problem. As expected, both our equation and the number of positive features derived from our analysis represent the first demonstration of an effective method to differentiate sPHEO from LPA, revealing the clinical significance of this type of analysis.

Our study provides reliable solutions for differentiating sPHEO from LPA on unenhanced CT scans. Both methods applied in this study yielded good results. When the number of positive features exceeded 8, the accuracy of prediction was 85.2% (92/108), with a sensitivity of 96.6% (28/29) and a specificity of 81% (64/79). The equation had a predictive accuracy rate of 94.4% (102/108), with a sensitivity of 86.2% (25/29) and a specificity of 97.5% (77/79) in differentiating sPHEO from LPA. The score of an adrenal lesion is easily obtained using the equation presented here, which includes the following QTA features: GeoFmin, GeoS, 135dr_GLevNonU and GeoEr. Furthermore, the calculation can be performed with a computer, making it easy for radiologists and surgeons to obtain results that are more accurate than their subjective judgments.

This study had several limitations that may have influenced the results. There was a large discrepancy between the sample sizes for the two groups due to the difference in the relative incidence of the two types of lesions, as well as the strict exclusion criteria used in our study. The retrospective nature of the study may have also resulted in a number of limitations, including subject selection bias. In the future, a well-designed prospective study with enough cases should be carried out to test the reliability of our equation. In addition, due to the relatively small size of our study population, we did not divide our data into training and test datasets.

Based on unenhanced CT images, our results suggest that machine learning-based QTA is a feasible method for differentiating sPHEO from LPA when AI is present.