Background: Nodal status and tumor site are prognostic factors for resectable pancreatic ductal adenocarcinoma (PDAC). Parameters for nodal status are diverse, and the number of examined lymph nodes (eNs) needed for good prognosis are uncertain. We try to modify staging system of resectable PDAC with parameters mentioned above by recursive partitioning analysis.

Conclusion: Our improved staging system helps to illuminate the interactions among tumor site, size and eNs.

Pancreatic ductal adenocarcinoma (PDAC), characterized with insidious onset and early metastasis, is one of the most life-threating diseases with an extremely low 5-year survival rate, only 6% in USA [1]. Even after resection with curative intent, most patients suffer from recurrence [2].

Significant differences in lymphatic backflow and innervations between the head and body/tail of the pancreas have prognostic effect on PDAC [5], which is not reflected on the 8th AJCC staging scheme.

The lymph nodes ratio (LNR, pNs divided by eNs) is selected as a parameter for nodal status and occasionally proved to be superior to pNs, especially for node-positive PDAC [14-16].

Our aim is to identify the number of eNs needed for good prognosis, to modify the staging schemes for resectable PDAC by recursive partitioning analysis (RPA), and to explore the interactions among parameters included.

The external validation cohort consisted of patients from Sun Yat-sen University Cancer Center (SYSUCC, from 2001 to 2016). All the patients (n=92) were pathologically diagnosed with PDAC. Patients with missing data on tumor sizes, nodal status or survival were excluded.

To modify the staging scheme, RPA, which was able to classify patients into groups of maximum separation [18, 19], was applied. R package named “rpart” was used to develop RPA model, classifying patients into different subgroups with different prognosis using selected parameters automatically, and “rpart.plot” package was applied to visualized result of RPA. For subgroups with similar median survival time, we merged them into bigger groups manually to generate our refined staging system.

Concordance index (c-index), ranging from 0.5 to 1, was used for quantifying discriminatory capacity. The higher c-index, the better discriminatory capacity [20]. When assessing prognostic homogeneity, we compared OS within each stage of our model by 8th AJCC stages and likelihood ratio χ2 test was also applied.

P<0.05 was regarded as statistical significance. IBM SPSS Statistics for Windows v.19.0 and R v.3.4.1 were used for statistical analysis.

Characteristics of Patients from SEER Database

Characteristics of 8480 patients from SEER database were shown in Table S1. Most of tumors were located in head of pancreas (84.5%), with the greatest dimension between 2cm and 4cm (59.6%), while median OS was 20 months.

Characteristics of Patients from SYSUCC

Characteristics of 92 patients from SYSUCC were shown in Table 1. Median age at diagnosis was 59 years old. Nearly 60% patients were male. Most of tumors were located in head of pancreas (83.7%). The median OS was 23 months. 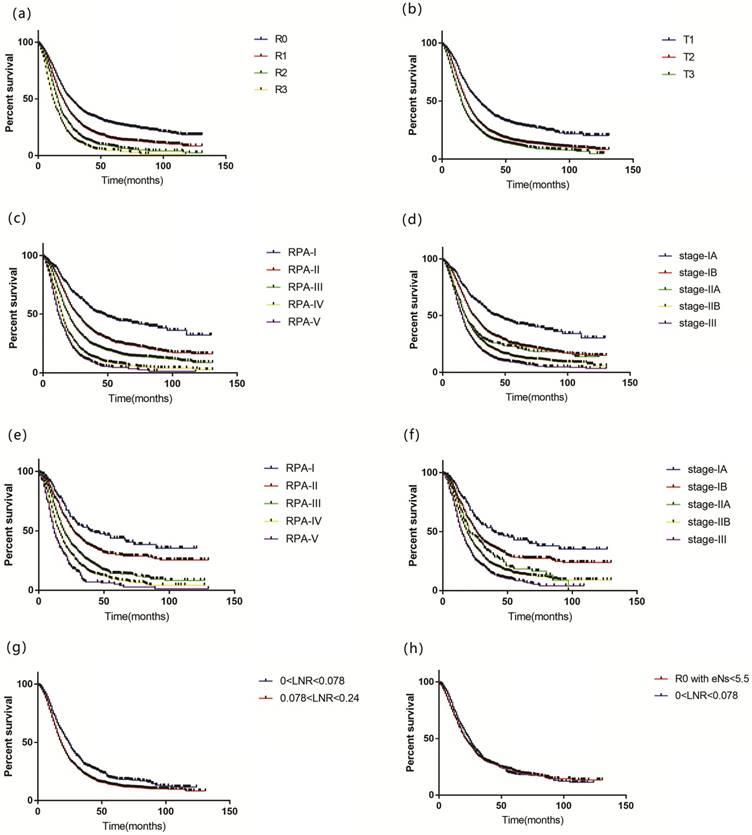 Higher proportion of positive nodal status was found in high T stage (p<0.001) (Table S6). Patients of T1 tended to have less pNs than T2-3 patients (p<0.001, Figure 2a). A cumulative frequency diagram of PDAC with diameter less than 4cm showed that when diameters were less than 10mm, few events of metastasis were found (Figure 2b).

Effects of Tumor Site on Prognosis

Patients of R1 in our model were further divided using LNR by RPA. It was revealed that prognosis of patients with 0<LNR<0.078 was better than others (p<0.001, Figure 1g). There was no significant difference in OS between patients of R0 with eNs<5.5 and patients with 0<LNR<0.078 (p=0.341, Figure 1h), which supported that if eNs were less than 6, negative nodal status may be false-negative (Table S7).

Nodal status is a potent prognostic factor for resectable PDAC [6]. pNs were selected as parameter for nodal status in 8th AJCC staging scheme. However, there are different clinical meanings for finding a positive node with different eNs. LNR, considering both pNs and eNs, was said to have preeminent prognostic effects [14-16]. Multivariable analysis confirmed that for node-positive patients, prognostic effect of LNR (HR=1.912) was more powerful than pNs (HR=1.025) in this study. After putting both pNs and LNR together into RPA, LNR is chosen in our model, implying that LNR may be a better parameter for node-positive patients. 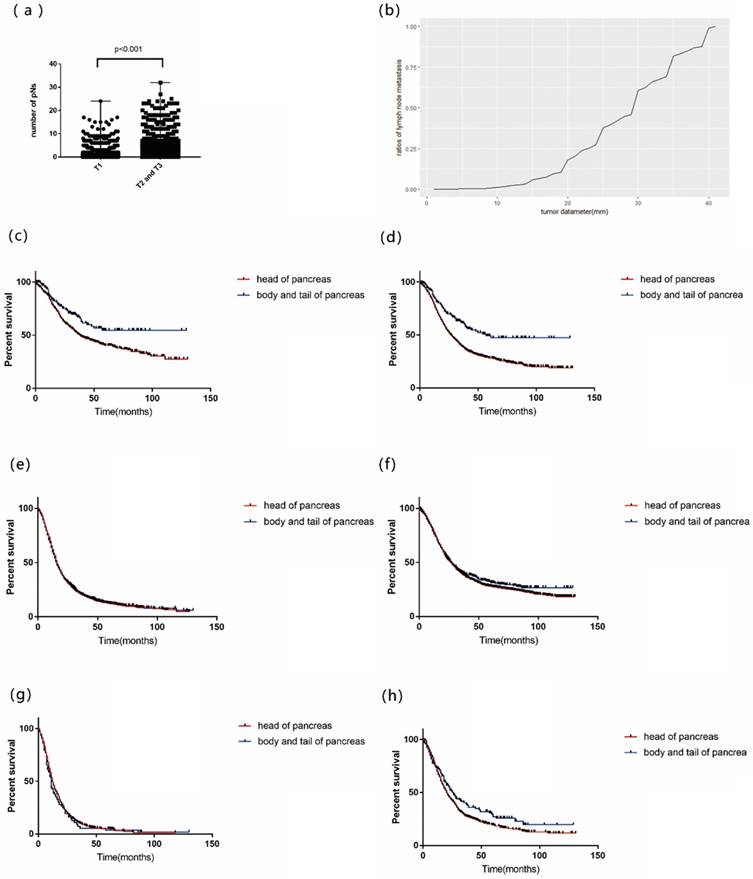 Previous study showed that 15 eNs were needed for accuracy of staging, decreasing the false negative rate of nodal status [12]. A study for gastric cancer incorporated node-negative patients with insufficient eNs into node-positive group, which implies that insufficient eNs may result in poor prognosis and false-negative nodal status [13]. We focus on the number of eNs needed for good prognosis, finding that 6 eNs are needed for good prognosis of node-negative patients, suggesting that at least 6 eNs are expected after resection.

Characteristics of PDACs in different sites of pancreas are different [21]. Our study implied that for patients with small tumor and node-negative patients with insufficient eNs, tumors in the head of pancreas led to poor prognosis, possibly because of their tendency to lymph nodes metastasis. However, the underlying molecule mechanisms are needed to be explored.

When diameters of PDAC are less than 1cm, few positive nodes are found. Local tumor growth is a vital step for metastasis [22]. As tumor grows, proliferating tumor cells, insufficient blood supply and poor lymph drainage result in activation of VEGF-C/Flt-4 axis and hypoxia signaling pathway, promoting lymphangiogenesis and making cancer cell more aggressive, which accelerates metastasis of cancer [23-25]. That corresponds with our finding.

RPA, dichotomizing populations into subsets step by step repeatedly [26] by suitable parameters and cut-off value to maximize the change [27, 28], is widely used in tumor staging [19, 29-31], while nomograms combine prognostic factors to predict clinical outcome [32, 33]. However, cumbersome calculation limits nomograms' uses in clinical practice [34]. Our RPA model has the following advantages. Firstly, without cumbersome calculation of scores which limits nomograms' uses, it is easy to use our model to evaluate prognosis of PDAC patients in clinical practices, which is helpful for decision-making of clinicians. Secondly, RPA, a kind of decision tree model [35], can handle lots of variables at a time and show importance ranking of variables [36]. The more important a variable is, the closer it is to the “root” of the decision tree. For example, in our model, LNR is the closest to the “root” of tree in node-positive patients (Figure S1), which means that compared to other parameters included, LNR is the most important prognostic variable, corresponding with our multivariable analysis. Thirdly, our RPA model can help to understand interactions among included parameters. For example, for R0T1 patients in our model, location of tumor is an important prognostic factor. However, for patients with high LNR, tumor site is not taken into consideration, which implies that tumor site may be more important for PDAC of early stage. Last but not the least, as both continuous variables and nominal variables can be handled by RPA. The best cut-off value for division of patients into different prognosis can be found for continuous variables. In our study, 6 eNs was found by RPA as cut-off value for eNs to improve prognosis of node-negative patients.

When assessing prognostic homogeneity in internal validation set, stage-IA and IIA of 8th AJCC can't be stratified by our staging model (Table S5), as a result of insufficient number of patients. Prognostic effects of eNs are based on the hypothesis that insufficient eNs may result in high rate of false negative of nodal status, meaning that eNs show predictive power when samples size is large enough.

There several limitations. First, coding errors are reported to remain in SEER database [37]. Besides, additional therapies, such as adjuvant chemotherapy, are not considered because of information unavailable. Thirdly, the number of patients in SYSUCC cohort may be not enough compared to patients from SEER database.

This study is supported by National Natural Science Funds (nos. 81672390)

20. Mayr A, Hofner B, Schmid M. Boosting the discriminatory power of sparse survival models via optimization of the concordance index and stability selection. BMC Bioinformatics. 2016;17:288