Purpose: This study aimed to identify the survival benefit and safety of alternative dosage schedules for sunitinib in metastatic renal cell carcinoma.

Metastatic renal cell carcinoma (mRCC) accounts for 20-30% of all kidney cancer at the initial diagnosis. Additionally, 20-40% of localized renal cell carcinoma will develop distant metastases after radical surgery [1]. Sunitinib has been recommended as a standard first-line treatment for mRCC. According to pre-clinical and clinical studies, the suggested standard dosing schedule of sunitinib is a dose of 50 mg/day taken orally (4 weeks on and 2 weeks off, i.e., the '4/2 schedule'), and this schedule has a superior survival benefit [2-4]. Evidence has demonstrated that high exposure of sunitinib was associated with improved response, time to progression, and overall survival (OS) [5]. However, long-term and high exposure was concomitant with severe adverse events (AEs). Data on sunitinib, either from phase III trials, expanded-access trials, or even in the adjuvant setting, showed that, although patients could achieve better survival benefit, more severe AEs would occur and impact compliance and medication taken [3-4,6-8]. In Asian studies, compared to that in western countries, survival was greatly improved; however, the incidence of toxicities tended to be much higher, resulting in more frequent schedule modifications, dosage reduction, interruption, and even discontinuation [9-14].

To balance efficacy and AEs better, alternative schedules of sunitinib have been evaluated to improve patients' tolerability and survival outcomes. In a phase 2 trial conducted by Motzer in 2012, a comparison to the standard 4/2 schedule with 37.5 mg continuous daily dosage of sunitinib was performed; unfortunately, the results failed to show superior drug tolerance and clinical benefit of a continuous dosing schedule [15]. Subsequently, retrospective studies from different medical centers compared individualized dosing schedule modifications according to toxic severity with a standard 4/2 schedule; the results summarized the non-inferior or superior clinical benefit of a 2/1 dosing schedule [16-24]. Recently, a prospective phase 2 trial compared an initial 2/1 schedule with a standard 4/2 schedule, and confirmed the superiority of an alternative schedule of sunitinib [25].

However, in the real world, some patients would be originally treated with an alternative 2/1 schedule, more patients were switched to the 2/1 schedule due to severe toxicities occurred after the initial cycles of standard 4/2 schedule. So far, studies comparing a 4/2 schedule switched to a 2/1 schedule indicated that the 2/1 schedule with standard 4/2 schedules were rare and from the western population [17,20]. In this retrospective study, we compared three sunitinib dosing schedules in Asian patients with respective to tumor response, survival outcomes and safety, and analyzed potential risk factors guiding physician's decision-making for the optimal dosing schedule in the treatment of mRCC as first-line therapy.

We retrospectively reviewed the medical records of patients treated with sunitinib as first-line antiangiogenic therapy between 2008 and 2015 at West China Hospital, Sichuan University. Eligibility criteria were patients with the following characteristics: ≥18 years of age, and pathological evidence of RCC. Patients with no distant metastasis were excluded. Clinicopathologic data, survival outcomes, and AEs were collected. Patients were seen by physicians for regular evaluations (physical examination, radiologic assessment and laboratory tests) to assess AEs and efficacy every 4-6 weeks. Most patients were initially administered with a standard dosing schedule of sunitinib (50 mg per day, 4 weeks on and 2 weeks off, i.e., the '4/2 schedule'); the remaining patients were placed on an alternative dosing schedule (50 mg per day, 2 weeks on and 1 week off, i.e., the '2/1 schedule'), mainly due to poor performance status or the physicians' experience. During treatment, patients who initially began with a 4/2 schedule changed their dosing schedule to a 2/1 schedule (4/2-2/1 schedule) due to severe AEs and/or worsening intolerance.

We used the one-sample Kolmogorov-Smirnov test to evaluate normal distribution. Data were presented as categorical variables and continuous variables; chi-square (χ2) and Kruskal-Wallis tests were used to evaluate statistical differences, respectively. Kaplan-Meier survival curves were plotted and the log-rank test was used to analyze statistical significance. The GraphPad Prism 6.02 and SPSS version 16.0 (SPSS Inc., Chicago, IL, USA) software were used for all statistical analyses. A p<0.05 was considered statistically significant.

A total of 99 patients with metastatic RCC treated with sunitinib were included in this retrospective study. The median follow-up time was 37 months. At the beginning, 75 (75.8%) patients were on a 4/2 schedule of sunitinib, while the remaining 24 were placed on a 2/1 schedule (mainly due to poor performance status or the physicians' experience). During treatment, 45 patients who initially began with a 4/2 schedule changed their dosing schedule to a 2/1 schedule (4/2-2/1 schedule) due to severe AEs and/or worsening intolerance. Only 30 were maintained with a 4/2 schedule throughout therapy. The median time from the initial 4/2 schedule switched to a 2/1 schedule was about 5 months (3.6 cycles). Table 1 summarized and compared the baseline characteristics of the three groups. Over two-third of the patients were men; most patients (>80%) underwent nephrectomy before systemic therapy, and over 60% of metastatic lesion sites were within a single organ. Although there were no statistical differences, more patients (41.7%) belonging to the 2/1 group had poor performance status, and patients in the 4/2-2/1 group (40.0%) had more opportunity for sequential therapy than the other two groups.

Statistical analysis by chi-square test suggested that PR was significantly different among three groups (p=0.047), while no statistical differences were observed in CR and SD. Overall, the objective response rate (ORR) was achieved in 29.3% (29/99), and the disease control rate (DCR) reached to 77.8% (77/99). Although the ORR was relatively lower in the 2/1 schedule group (4/24, 16.7%), a statistical difference was not observed (p=0.383). 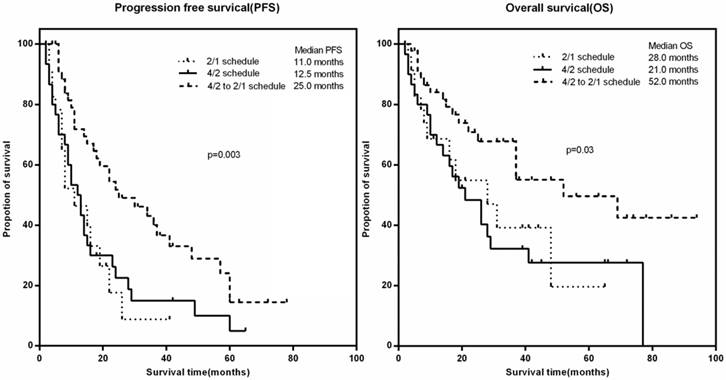 Univariate and multivariate analyses for PFS and OS

Notes: All statistical analyses were compared between 4/2-2/1 schedule pre-switched and post-switched periods

In the current study, we firstly analyzed three sunitinib dosing schedules—4/2-2/1, 2/1 and 4/2 schedules—in Asian patients with mRCC with respect to clinical outcomes and drug toxicities. Among these three dosing schedules, patients with a 4/2-2/1 schedule seemed to achieve the best survival benefits and experienced an improved safety profile.

Clinical data showed that patients treated with sunitinib would frequently suffer from kinds of drug-related toxicities [3-4, 6-7]. These AEs could result in a 49-50% of dose reduction or interruption; 19-24% of patients discontinued therapy due to severe AEs. It is noteworthy that, among patients of Asian ethnicity, the incidence of AEs, especially myelosuppression, appeared to be much higher than that in other races [10-12]. Pharmacokinetic analysis revealed a relatively higher bioavailability in the Asian population, which could at least partially explain why higher AE incidence and better survival benefits were seen in Asian patients [28].

In the present study, the safety profile was similar to that in previous studies. An alternating 2/1 schedule, including the initial 2/1 and 4/2-2/1 schedules, could undoubtedly minimize treatment-related toxicities. Although the total incidence of all grades of AEs between the alternative 2/1 schedule and standard 4/2 schedule was not significantly different, the incidence of grade ¾ AEs in patients on a 2/1 schedule was considerably lower than in those on a standard regimen. It is worth noting that the incidence of severe AEs in patients with an initial 2/1 schedule appeared to be slightly higher than that in those with a 4/2-2/1 schedule after schedule modification; this suggested that AEs, especially severe AEs, tend to occur in the early cycles of TKI therapy, and patients showed probable drug tolerance and adaption to TKI treatment.

Currently, different alternative dosing schedules for sunitinib have been investigated in clinical practice. Although there is a lack of validation with well-designed prospective randomized trials, the 2/1 schedule seemed to have the highest probability of replacing the current standard 4/2 schedule. A phase I study has showed that the 2/1 schedule provided prolonged drug exposure compared with that of the 4/2 schedule, which suggested the reliable survival benefits from the 2/1 schedule [29].

In the present study, some patients were initially treated with the 2/1 schedule, while some were finally placed on a 2/1 schedule after a period of being on the 4/2 schedule. We suspect there is difference in efficacy between the two types of 2/1 schedules. The MD Anderson cancer center and the RAINBOW group have compared the initial 2/1 schedule and 4/2 to 2/1 switch (4/2-2/1) schedule with standard 4/2 schedule in the Western population [17,20]. Paradoxically and interestingly, two studies from the Asian population showed evidence to support the initial 2/1 schedule as the optimal regimen in the treatment of mRCC [23,25]. However, these two studies lacked long-term outcomes of OS, included a small sample size, and/or focused on the safety profile or health-related quality of life.

It was the first time to compare these three different dosing schedules in the Asian population with long-term outcomes. Undoubtedly, based on the results from ours and the two previous retrospective studies, the 4/2-2/1 schedule seemed to have the highest efficacy among the three dosing schedules, while the superiority of the initial 2/1 schedule compared to the standard 4/2 schedule is undetermined [17,20]. Although we also had a small sample size, we compared long-term clinical outcomes among the three schedules and attempted to find potential factors that may affect clinical decision making on a suitable sunitinib dosing schedule. In addition, patients in our study had relatively poor ECOG status and the ratio of poor IMDC risk was relatively high. Furthermore, we analyzed more comprehensive AE data than the previous Asian reports.

Providing reasonable explanations for these inconsistent conclusions was worthy of thorough consideration. Thus, we acknowledge the limitations of our study. First, our results were limited by the retrospective study design itself. Patient selection and decision-making for dosing schedule were unavoidable biases. Second, the collection and evaluation of AEs could also be biased, due to limited medical records and recall or reporting bias from physicians and patients. Third, patient compliance could not be precisely assessed during treatment. In addition, the development of AEs could help identify patients with inherent pharmacokinetic and pharmacodynamics characteristics that predispose to clinical benefit, which could at least partially explain why the patients with a 4/2-2/1 schedule had much longer PFS and OS [30-32]. Herein, ongoing prospective trials are currently collecting more data, which will ultimately help in eliminating this bias (NCT02060370, NCT01499121).

Overall, the 4/2-2/1 schedule was an independent factor predicting favorable prognosis in patients treated with sunitinib as first-line therapy. Interestingly and surprisingly, patients with unfavorable IMDC risk (intermediate/poor) or higher tumor burden (multiple sites of metastatic organs) seemed to achieve much better survival benefit from the 4/2-2/1 schedule. Ultimately, the risk factors mentioned above together with severe AEs occurred during treatment might help clinicians to find optimal candidates for the 4/2-2/1 dosing schedule. Again, whether these risk factors together with AEs could be considered as criteria for the physician's decision to place a patient on the 4/2-2/1 schedule, needs to be validated with a large-scale prospective clinical trial.

Totally, compared to other two schedules, the safety profile and clinical outcomes of patients with mRCC treated with sunitinib were improved significantly with the 4/2-2/1 schedule. Patients with unfavorable IMDC risk or higher tumor burden seemed to be candidates who could get better survival benefit from switched dosing schedules of sunitinib. Further prospective studies are required to verify the current conclusion; however, our results provide evidence that this alternative dosing schedule may offer some insights into the improvement of clinical practice, particularly regarding personalized patient management and achieving individualized therapy.

5. Houk BE, Bello CL, Poland B. et al. Relationship between exposure to sunitinib and efficacy and tolerability endpoints in patients with cancer: results of a pharmacokinetic/pharmacodynamic meta-analysis. Cancer Chemother Pharmacol. 2010;66:357-371

24. Miyake H, Harada K, Miyazaki A. et al. Improved health-related quality of life of patients with metastatic renal cell carcinoma treated with a 2 weeks on and 1 week off schedule of sunitinib. Med Oncol. 2015;32:78