Background: Hepatocellular carcinoma (HCC) patients with macroscopic vascular invasion (MaVI) have limited lifespans. According to recent studies, surgical treatment may be the most promising option. However, the current staging system does not select patients who will benefit most from hepatic resection.

Study design: A total of 123 patients undergoing hepatic resection for HCC with macroscopic vascular invasion (MaVI) between 2010 and 2014 at The Third Affiliated Hospital of Sun Yat-sen University were selected. We developed nomograms for overall survival (OS) and recurrence-free survival (RFS) using a Cox proportional hazards model. We assessed nomogram model performance based on the concordance index (C-index) and a calibration plot.

Results: The 1- and 3-year overall survival (OS) rates for all patients were 84% and 71%, respectively. Correspondingly, the 1- and 3-year recurrence-free survival (RFS) rates were 55% and 35%, respectively. In the multivariate Cox model, the extent of vascular invasion, tumour count, fibrinogen, HBV DNA load and serum potassium significantly affected prognosis. The C-index of the two nomograms were 0.80 and 0.69 for OS and RFS respectively. Based on our nomogram, patients predicted to have 1-year and 3-year RFS rates of more than 80% and 56% had actual 1-year and 3-year RFS rates of 81.8% and 57.1%, respectively, including 9.0% and 17.1% of the HCC patients with MaVI in our database.

Hepatocellular carcinoma (HCC), the most common primary malignant tumour of the liver, is considered to be the third leading cause of all cancer-related deaths and the sixth most common cancer worldwide.1,2

Despite official recommendations, many clinicians do not restrict surgical treatments to early-stage HCC. In fact, studies in several countries have reported surgery to be an effective treatment option for patients in later stages of the disease,9-12 leading to calls to expand the indications for surgical treatment.13,14 According to recent studies, surgical treatments, such as hepatic resection or liver transplantation, may be the most promising options for certain patients with MaVI.6,15-17

A retrospective database of The Third Affiliated Hospital of Sun Yat-sen University was reviewed. A total of 123 patients undergoing hepatic resection for HCC with MaVI between 2010 and 2014 were selected. The HCC diagnosis was determined based on the findings of typical radiologic features in a 4-phase multidetector computed tomography scan or dynamic contrast-enhanced magnetic resonance imaging and finally confirmed by histology after surgery. MaVI was defined as tumours within a vessel that was visible to the naked eye, including the main portal vein and/or portal vein branches and/or hepatic veins and/or inferior vena cava. Patients were preoperatively evaluated by abdominal ultrasonography, thoracic and abdominal dynamic CT, and MRI. The extent of the vascular invasion was accurately assessed by these imaging techniques and was finally confirmed to be within an endothelial lined channel on histology. The inclusion criteria for surgical treatment required patients to have Child-Pugh Class A liver disease. The future remnant liver volume was predicted by CT volumetry in every patient. Patients with resectable tumours and a predicted remnant liver volume of more than 35% of the total liver volume were offered hepatic resection. Patients with tumor extending into the portal bifurcation or inferior vena cava received tumor thrombectomy and the vessel was closed. Radical resection of the vessel wall and reconstruction was not performed. In most cases, patients with tumor extending into subordinate branches of the major vascular received an anatomic resection. 11 of 123 patients of our database had distant metastasis in lungs but they still requested a hepatic resection and received sorafenib or lung resection after hepatic resection.

The regular follow-up program started after the patients were discharged from the hospital. Patients were followed up four weeks after discharged for the first time, and every 3 months during the first 2 years, every 4 months during the third year thereafter. Follow-up examinations included laboratory tests (including serum alpha-fetoprotein (AFP), liver function, and blood tests), abdominal ultrasonography, and contrast-enhanced CT.

Univariate and multivariate analyses of the factors associated with patient survival were assessed using Cox proportional hazards models. The survival nomograms are based on the multivariate analysis. Hazard ratios are presented with 95% CI. The nomograms were validated using the concordance index (C-index) and calibration plots. A bootstrap method was also added for further validation. We further split the patients randomly into 70% cases for development and 30% cases for validation. The C-index measures the probability of concordance between predicted and observed survival, similar to the area under the receiver operating characteristic curve (ROC) for censored data. The C-index can range from 0.5 to 1.0, indicating random predictions and perfect concordance, respectively. A calibration plot was used to assess the prediction accuracy of the nomogram by plotting the actual survival against the nomogram-predicted survival probabilities. All statistical analyses were performed using SPSS 23.0 (SPSS, Chicago, IL, USA) for Windows and R software (version 3.4.1) with the rms package version 5.1-1 (http://CRAN.R-project.org/package = rms). A two-sided P value less than 0.05 was considered to be statistically significant.

During the study period, 123 patients underwent hepatic resection for HCC with MaVI at our hospital. The median follow-up time of our patients was 36 months. The 1- and 3-year overall survival (OS) rates for all patients were 84% and 71%, respectively. Correspondingly, the 1- and 3-year recurrence-free survival (RFS) rates were 55% and 35%, respectively. At the time of data collection, 36 deaths (29.3%) and 79 cases of recurrence (64.2%) had been recorded. Descriptive statistics for the database are summarized in Table 1.

Nomograms for RFS and OS. The nomograms provide a method to calculate 1-year and 3-year OS and RFS after hepatic resection for HCC patients with MaVI, on the basis of a patient's combination of covariates. To use, locate the patient's tumour count, draw a line straight up to the points axis to establish the score associated with that count. Repeat for the other three covariates. Add the score of each covariate together and locate the total score on the total points axis. Draw a line straight down to the 1-year and 3-year OS or RFS to obtain the probability. 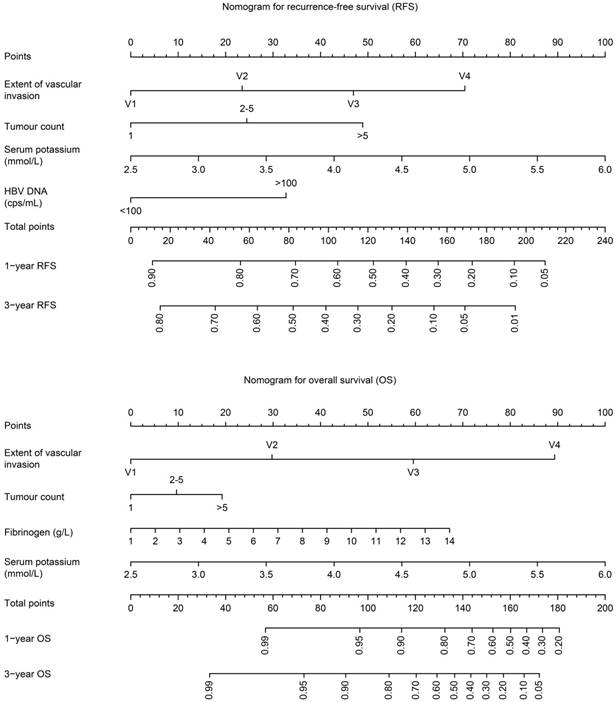 MaVI poses a clinical dilemma due to its close relationship with post-treatment tumour recurrence and poor survival in HCC patients. Among the HCC patients with MaVI, the 1-year and 3-year survival rates for those receiving local ablation were approximately 75% and 51%, respectively, and approximately 57% and 41%, respectively, for those receiving transarterial chemoembolization.18 According to the SHARP trial, the median survival for patients receiving sorafenib was approximately 8.1 months.19 The prognosis of HCC with MaVI is discouraging.

Because local ablation, transarterial chemoembolization and systemic chemotherapy have not been shown to provide satisfied survival benefit and because the natural history of untreated disease typically leads to death within months, surgical treatment may be a therapeutic option that offer more survival benefit.3,20-22 However, the current staging system remains unable to select patients who will benefit most from hepatic resection. Currently, the real need is to be able to identify which HCC patients with MaVI will require surgery.

We identified important multivariate predictors of survival for HCC patients with MaVI and proposed a prognostic model using only known preoperative factors to help select HCC patients with MaVI for hepatic resection. Additionally, we developed novel comprehensive clinicopathologic prognostic nomograms that accurately predict an individual patient's survival and may be used as a reference in deciding whether to operate. We believe that having two nomograms, one for overall survival and one for recurrence free survival, might add to their clinical value. In the present study, multivariate analysis of prognostic factors for survival after surgery in patients with HCC and MaVI indicated that the extent of vascular invasion, tumour count, serum fibrinogen, HBV DNA and serum potassium were significantly associated with patient prognosis. 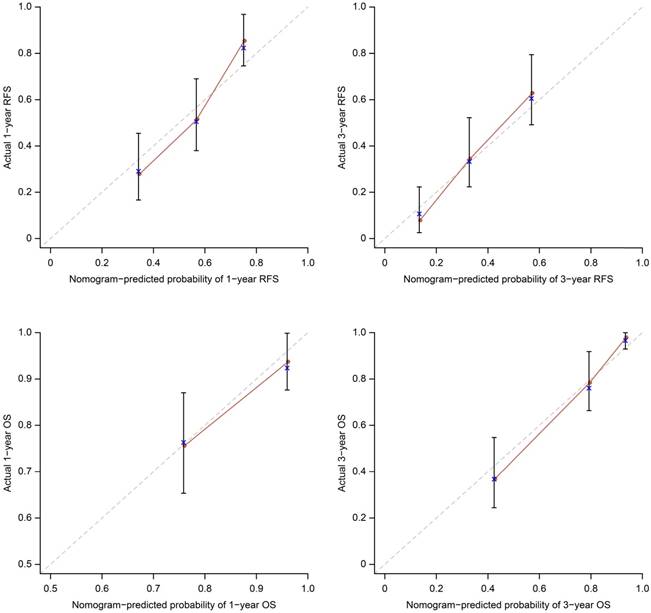 Yoshidome et al. reported that HCC patients who had good treatment results with a tumour size measuring less than 10 cm in diameter appeared to have favourable outcomes after surgical treatment.26 Roayaie et al.6 have observed that tumour size was independently associated with survival. Pawlik et al. have stated that moderate to severe fibrosis (Ishak grades 3 to 6) remained an independent predictor of poor survival in HCC patients with MaVI.27 However, in our study, tumour size and cirrhosis were not significantly correlated with survival. Tsai et al.28 have observed that tumour size was closely correlated with both microscopic and macroscopic vascular invasion. The fact that tumour size may be a marker of vascular invasion may explain why tumour size failed to affect patient survival in our study, which controlled for vascular invasion.29-32 Additionally, liver cirrhosis may become more pronounced over time, particularly with 5 or more years of survival.33 Our study focused on 1- and 3-year survival, which may explain why cirrhosis failed to affect survival in our study.

Some recent studies have also shown that HCC recurrence is associated with a high HBV-DNA load.34-40 In our study, HBV DNA copies correlated with RFS, perhaps because HBV replication accelerates in HBV reactivation, thereby resulting in liver injury and influencing recurrence. Some studies have also shown that high plasma fibrinogen levels are associated with advanced stage HCC and poorer long-term overall survival,41,42 which aligned with our study.

The present study has a few limitations. First, only a few patients underwent surgical treatment, leading to a small sample size because most of the HCC patients with MaVI received palliative treatment. Second, external validation of this predictive model is unavailable at the moment.

In conclusion, surgical treatment is now a therapeutic option that may provide more survival benefit in HCC patients with MaVI. We developed novel, comprehensive clinicopathologic prognostic nomograms that accurately predict individual patient survival. With the help of our nomograms, selected HCC patients with MaVI can benefit from hepatic resection with the same survival rates as patients without MaVI.

We thanks for the English and format editing by American Journal Experts Company.

10. Torzilli G, Belghiti J, Kokudo N. et al. A Snapshot of the Effective Indications and Results of Surgery for Hepatocellular Carcinoma in Tertiary Referral Centers: Is it Adherent to the EASL/AASLD Recommendations? An Observational Study of the HCC East-West Study Group. Ann Surg. 2013;257:929-37