Purpose: To date, no guidelines exist for elderly nasopharyngeal carcinoma (NPC) patients (60 years of age or older) due to a lack of prospective clinical trials. This study evaluated the efficacy of concurrent chemotherapy (CCRT) for NPC in elderly patients treated with intensity-modulated radiotherapy (IMRT).

Methods: Patients were identified from a prospectively maintained database. A total of 198 consecutive cases of elderly patients with NPC receiving IMRT, including 103 patients treated with IMRT plus CCRT and 95 patients treated with IMRT alone, were analysed from January 2002 to December 2013. Multivariate analysis (MVA) using the Cox proportional hazards model and propensity score analysis (PSA) were performed for overall survival (OS) and disease-free survival (DFS). Finally, sensitivity analysis was performed.

Results: The median follow-up time was 55.3 months (range, 3-135.6 months). In the entire cohort, both MVA and PSA models showed that compared with IMRT alone, IMRT plus CCRT significantly improved survival (hazard ratio [HR] 2.143, 95% confidence interval [95% CI] 1.180-3.890; HR 1.961, 95% CI, 1.117-3.443, for OS and DFS, respectively). Similar results were found in the subgroups with high levels of Epstein-Barr virus (EBV) DNA, except in the low-EBV-DNA cohort. The total rates of severe acute toxicity, including leukopenia, neutropenia, stomatitis, and emesis, were significantly higher in the IMRT+CCRT group than in the IMRT-alone group (P < 0.001) but were similar to the rates of severe late toxicity (P = 0.818). Sensitivity analysis confirmed the robustness of our analysis.

Conclusions: In the era of IMRT, CCRT retained survival benefits at high EBV DNA levels but not at low EBV DNA levels for elderly NPC patients. Randomized clinical trials are needed to confirm our findings.

Nasopharyngeal carcinoma (NPC) differs from other head and neck cancers because of its unique characteristics in terms of epidemiology, aetiology, clinical presentation, and prognostic factors [1, 2]. NPC is fairly prevalent in Southern China and Southeast Asia [3-5], with a peak incidence from 50 to 60 years of age. Elderly NPC patients (60 years of age or older) account for approximately 14% of all NPC cases. The currently recommended standard regimen is the addition of concurrent chemotherapy (CCRT) for NPC patients who receive radiotherapy (RT) with or without adjuvant chemotherapy, although this approach carries higher rates of acute toxicity.

However, treatment guidelines are principally tailored for non-elderly patients, and elderly NPC patients are commonly excluded from clinical trials because of restrictive selection criteria. Several previous studies have shown that CCRT is feasible and effective and could achieve reasonable local control in elderly NPC patients receiving RT [6, 7]. Unfortunately, these studies were based on elderly patients treated with 2DRT. The latest studies have reported that adding CCRT did not improve the survival of NPC patients receiving intensity-modulated radiotherapy (IMRT) [8, 9]. Moreover, elderly patients receiving CCRT might be more prone to the accompanying complications and in inferior physical condition and would thus suffer more serious toxicities [10]. Therefore, in the era of IMRT, it remains unknown whether CCRT is necessary and provides a survival benefit for elderly patients. 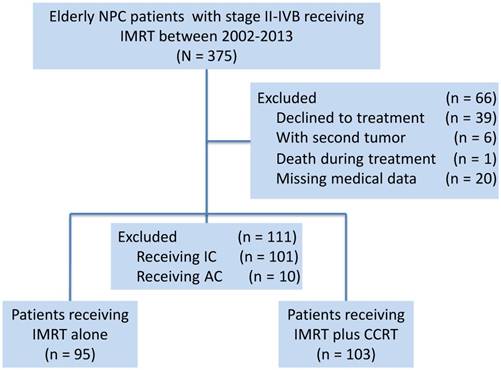 We therefore investigated long-term cohorts from an endemic area to assess whether elderly patients benefit from CCRT compared to the outcomes of IMRT alone.

This study was reviewed and approved by the Institutional Review Board and Ethics Committee of SYSUCC, Guangzhou, China. All the patient records were anonymized and de-identified prior to analysis.

Of 198 patients, 139 patients were measured prior to treatment. Four prespecified low-EBV-DNA groups and two prespecified high-EBV-DNA groups, based on a cut-off of 4,000 copies/mL, were analysed. The selected cut-off level was chosen because this threshold has been shown to be prognostic in previous NPC studies using the same measurement system [13-15].

Treatment with chemotherapy and radiotherapy

OS and DFS were estimated with the Kaplan-Meier method. The log-rank test was used in the univariate analysis. The Chi-square test, Fisher's exact test, and Student's t-test were used to compare the differences between the IMRT+CCRT group and the IMRT-alone group. Multivariate analysis (MVA) was performed using the Cox proportional hazards model with the forward stepwise method.

Propensity score analysis (PSA) adjusts for the bias introduced by non-random treatment assignment by comparing patients who had a similar likelihood of receiving a treatment but who received different treatments [21]. For this analysis, based on the patients' characteristics, we used a generalized boosting model to calculate the propensity score with the smallest mean square error (MSE). Then, the effect of treatment on survival was estimated with inverse probability weighting, which can adjust for other confounders with better balance and estimate the effect with more precision than matching because of complete samples with maximized power. A marginal Cox proportional hazards model was then applied using maximum partial likelihood estimates of regression parameters and a robust sandwich covariance matrix [22-24].

Finally, we performed sensitivity analysis to measure the potential unmeasured influence to validate the robustness of the analysis results. All statistical tests were two sided, and P < 0.05 was considered significant. All statistical analyses were performed in R (version 2.15.3).

Characteristics of the total 198 NPC patients, including 103 patients (52%) receiving IMRT+CCRT and 95 patients (48%) receiving IMRT alone, are listed in Table 1. The percentages of clinical stages II, III, and IVA-B were 23.7%, 48.5%, and 27.8%, respectively. There were no significant differences in the distribution of sex, body mass index (BMI), education, smoking, drinking, Charlson/Deyo comorbidity score, EA-IgA, EBV DNA, or year of diagnosis (all P values > 0.05), but significant differences were observed for age, VCA-IgA, tumour (T) and node (N) stages, and clinical stage. Patients with older age or in earlier stages were more likely to receive IMRT alone than were patients receiving IMRT plus CCRT (P < 0.05).

Baseline of characteristics in the entire cohort

Response to treatments of IMRT with or without concurrent chemotherapy

As a part of the sensitivity analysis, to confirm the MVA results and to recalculate the effects of the two treatment regimens using various algorithms via reducing confounding, a propensity score weighting model was performed with observational confounders. The results of PSA were similar to those of the MVA with the Cox proportional hazards model (Table 3).

Multivariable Analysis of the Primary Cohort

* PSA/IPTW, propensity score analysis by inverse probability of treatment weighting, was performed to estimated effects of regimens with observed variables.

Survival based on EBV DNA

Kaplan-Meier survival curves for overall survival (A) and disease-free survival (B) among patients with high and low EBV DNA levels in the measurable cohort, based on a cut-off of 4,000 copies/mL. 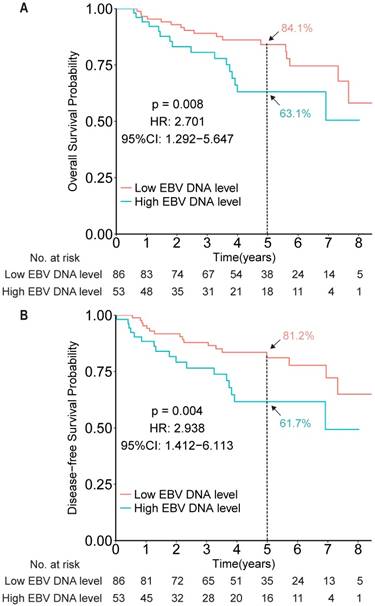 Although similar results were revealed through different MVA models with various observational variables, including socioeconomic factors and a reliable biomarker, unmeasured confounders, i.e., the poor performance status of elderly patients, could potentially impact the prognostic HRs. Thus, based on the estimated treatment effects for survival in the entire cohort, sensitivity analysis was performed (Table 5). The gamma value was not small, indicating the robust results of the study analysis. 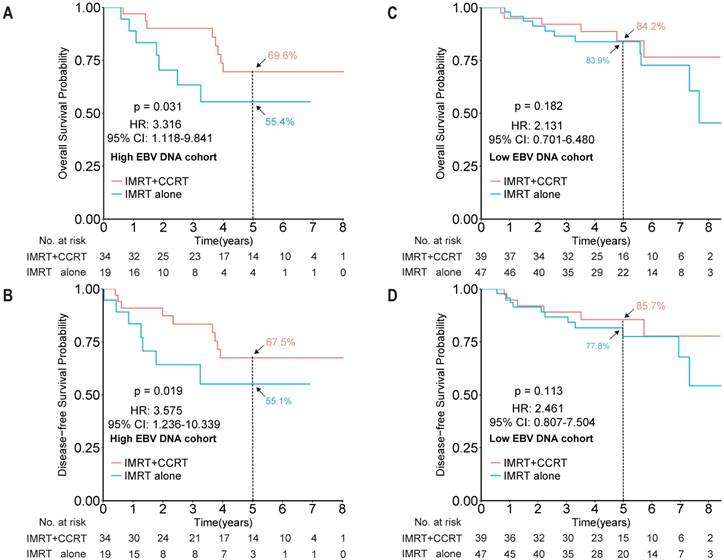 *Included one death case with cardiopulmonary failure in CCRT+IMRT group.

Several previous studies have shown that CCRT can achieve reasonable survival and locoregional control in elderly NPC patients [6, 7]. However, most patients enrolled in these studies were treated with conventional 2DRT. Furthermore, the widespread use of IMRT has demonstrated excellent local control for NPC patients [1]; however, elderly patients who met the strict selection criteria accounted for only a small fraction of the patients evaluated in these reports. Therefore, in the era of IMRT, whether CCRT can significantly benefit elderly NPC patients is still unclear. In our study, based on a large cohort of elderly NPC patients receiving IMRT, the results showed that the addition of CCRT to IMRT for elderly patients did improve both OS and DFS.

The quantitative response of plasma EBV DNA to treatment has been investigated for prognostic risk assessment and treatment stratification [25]. Our analysis confirmed EBV DNA as an independent prognostic biomarker that can predict the prognosis of elderly NPC patients treated with IMRT. However, to the best of our knowledge, no previous study has explored whether a survival benefit could be obtained from CCRT for elderly patients receiving IMRT with different stratified levels of EBV DNA. As a result, among elderly patients with high EBV DNA levels, those who received IMRT plus CCRT showed a greater survival benefit in terms of both OS and DFS than did those who received IMRT alone. Nevertheless, elderly patients with low EBV DNA levels showed similar survival benefits in the two treatment regimens. Given the post hoc nature of these analyses and the absence of a significant interaction between treatment regimen and risk stratified by EBV DNA level, the results should be interpreted cautiously.

In terms of toxicity, there was one case of chemoradiotherapy-related death in the IMRT+CCRT group, and we observed that patients receiving IMRT plus CCRT suffered from higher rates of severe acute toxicity (leukopenia, stomatitis, and emesis) than did patients receiving IMRT alone, while the rates of severe late toxicity were similar in both groups, consistent with previous studies [7, 18]. However, in terms of severe acute toxicity from chemoradiotherapy and RT alone, Zeng et al. reported severe acute mucositis rates of 46% and 28.7%, respectively, which were higher than the toxicity rates of 39.8% and 16.8%, respectively, found in our study. The reason for this result might be that IMRT significantly reduced the incidence of side effects because of the anatomic complexity and benefits in accurately encompassing tumour targets.

We acknowledge that limitations exist in this study. First, the main limitation of this study is its retrospective nature. To minimize bias, we not only adopted different methods to confirm the analysis results but also performed sensitivity analysis to estimate the effects of unmeasured confounders to validate the robustness of the analysis. Second, the quantitative plasma EBV DNA cut-off of 4,000 copies/mL was selected based on our previous studies in the same endemic area. However, other cut-off have been suggested. Thus, we examined prespecified groups by order of magnitude and groups by cut-off to coordinate the analysis. However, whether combined IMRT and CCRT can provide a survival benefit to an optimal elderly population requires confirmation in further prospective randomized trials.