Colorectal cancer (CRC) is one of the most malignant cancers, and it tends to migrate to the liver and has a high mortality rate. Several mechanisms behind the metastasis of CRC have been identified, including hyperlipidemia. For example, hyperlipidemia can lead to enhanced stemness and neutrophil infiltration, which increases CRC metastasis. There are three primary aspects to the relationship between hyperlipidemia and CRC metastasis: hyperlipidemia (1) promotes the initial metastatic properties of CRC, (2) stimulates CRC cells to leave the vasculature, and (3) facilitates the development of CRC metastasis. In this study, we provide a comprehensive overview of the role that hyperlipidemia played in CRC metastasis to help reduce the mortality associated with CRC metastasis from the standpoint of metabolic. We also review cancer metastasis.

Colorectal cancer (CRC) is one of the most common neoplasms of the digestive system [1]. It is the third leading cause of cancer-related deaths in the United States [2]. The 5-year survival rate is >90% in patients with early-stage disease, compared with 10-15% in patients with distant metastases [3]. The liver is the most important target site of CRC metastasis [4]. The progression of metastasis mainly involves three steps. First, the primary cancer cells disseminate locally into the vascular system. Second, circulating cancer cells can either be arrested by the innate immune system or extravasate through vascular walls into distant tissues. Finally, the micro-metastatic colonies settle in the parenchyma and proliferate further [5, 6]. There are several mechanisms closely related to CRC distant metastasis. For example, transforming growth factor-β (TGF-β) is a major inducer of epithelial-mesenchymal transition (EMT) program [7]. EMT program is considered as a crucial step in metastatic cascades by making CRC cells acquire migratory abilities [8]. Some factors, such as vascular endothelial growth factor (VEGF), contribute to vascular leakiness and therefore increase the rate at which cancer cells leave the vascular system and metastasize [9]. Recent studies have provided new insights into the profound influence of lipids, via distinct capabilities, on CRC metastasis. Some studies have indicated that hyperlipidemia can exacerbate several severe diseases such as cardiovascular disease, which remains the primary cause of mortality in Western countries [10, 11]. Recent epidemiologic studies have also suggested that lipid metabolism plays important roles in the development of many cancers, including prostate and breast [12, 13]. Furthermore, decreased concentrations of high-density lipoprotein cholesterol (HDL) have been related to increased proinflammatory cytokines such as interleukin 6 (IL-6) and tumor necrosis factor-a receptors, which promote CRC cells growth and proliferation [14]. In the clinic, many epidemiological studies have demonstrated that several lifestyle choices that lead to high levels of lipids, such as high-fat diet (HFD) status, stimulate the CRC progression [15]. Clinical evidence suggests that statins can reduce the incidence of CRC-related mortality [16]. Therefore, it is worth understanding the mechanisms by which hyperlipidemia affects CRC metastasis. For example, a HFD lifestyle is responsible for increased CRC cell stemness, and enhanced stemness may stimulate the initial metastatic capability [17]. Similarly, a HFD status enhances macrophage infiltration, which promotes the migration of CRC cells to distant organs [18, 19]. IL-8 acts as the obesity-induced inflammation, and a higher level of it is also associated with CRC metastasis [20]. In addition, enhanced level of insulin-like growth factor-1 (IGF-1) found in obese individuals accelerates formation of the liver metastasis microenvironment [21]. CRC patients who consume a HFD accumulate more reactive oxygen species (ROS), which eventually stimulate the progression of metastasis by degrading molecules such as PKC and protein tyrosine phosphatases [6].

Several mechanisms involving hyperlipidemia and CRC metastasis have been identified in clinical experiments. In addition to these well-known molecular changes that promote malignant behavior, this review highlights the most recent developments in our understanding of how hyperlipidemia affects CRC metastasis to the liver.

Cancer stem cells (CSCs) are an important driving force behind CRC metastasis [22, 23]. CSCs have the ability to self-renew and undergo multi-lineage differentiation [24, 25]; they also play a key role in both original tumorigenicity and the ability of tumors to migrate [26]. Moreover, the dissemination of CSCs may help metastatic colonies to form in distant organs and descendant cells to adjust to the new microenvironment [27]. CRC recurrence and metastasis after chemotherapy are sometimes the result of present CSCs [28].

Serum lipid levels play an essential role in the progression of CSCs. In the context of a HFD, CRC cell stemness can be enhanced by modifying signaling pathways and genetic expression. A HFD induces tumor progression by acting on the RBP4-STRA6 pathway, which stimulates stemness by activating signal transducer and activator of transcription 3 (STAT3) [17]. Low-density lipoprotein cholesterol (LDL) also enhances the expression of stemness genes including Sox2, Oct4, Nanog, and Bmi 1 [6]. Enhanced CRC cell stemness is required for the later stages of migration.

It is generally accepted that the acquisition of pro-invasive capacities is associated with EMT [29]. The EMT program allows epithelial cells to acquire a mesenchymal phenotype [30], which involves loss of cell-cell adhesion, alteration of cytoskeletal organization, and loss of apical-basal polarity [31, 32].

EMT can be activated in a variety of cancer cells [33], and enables cells to acquire stem cell-like features and the ability to migrate [34-36]. After activation of EMT, CRC cells can differentiate and become resistant to apoptosis [37, 38]. Moreover, cancer cells within the CSC-enriched subpopulation exhibit aspects of EMT program activation [32]. LDL has the ability to activate the MAPK pathway, which is an indispensable signaling cascade during EMT that is regulated by PKC and TGF-β/Smad signaling [6]. The MAPK pathway is also involved in a wide range of cellular responses, including cell proliferation, differentiation, and survival [39]. Consistent with these findings, lipids specifically affect the early metastatic seeding of CRC in distant organs.

Hyperlipidemia promotes the departure of CRC cells from the vasculature

Many cells within the bloodstream, including endothelial cells, platelets, lymphocytes, and neutrophils, promote metastasis [40, 41]. For example, after degranulation, mast cells (MCs) could secrete tryptase to degrade extracellular matrix (ECM) components to help the invasion and metastasis of CRC [42]. All of these cell types may protect cancer cells from immune attack, especially that involving natural killer (NK) cells and γδ T cells [43-45]. NK cells and γδ T cells are crucial for the innate immune response that initiates a series of immunological effects on cancer cells [46, 47]. Hypercholesterolemia-induced oxidative stress downregulates the expression of Tet1 in hemopoietic stem cells, resulting in increased DNA hypermethylation and histone modifications. This ultimately leads to dysfunction and reduced differentiation of NK cells and γδT cells, thereby causing an inadequate immune surveillance [45].

Hyperlipidemia is significantly correlated with a higher proportion of blood neutrophil [48, 49]. The accumulation of neutrophils is mainly the result of enhanced granulopoiesis and mobilization from the bone marrow, as well as increasing levels of CCR1, CCR2, CCR5, and CXCR2 [50]. Neutrophils are critical for cancer metastasis [51]. They can induce a leaky vasculature and increase the attachment of cancer cells to endothelial monolayers via matrix metalloproteinase MMP9 and BV8, thereby facilitating the adhesion and extravasation of CRC cells via the vascular system [52, 53]. Neutrophils also capture circulating cancer cells, either by the cell surface molecule CD11b or by releasing neutrophil extracellular traps, which contributes to increased metastasis formation [41, 44, 54]. Neutrophils are also effectors of angiogenesis, since they provide CRC cells with more selective escape routes [55]. Therefore, neutrophils promote metastasis around the vascular system.

Among immune cells, dendritic cells (DCs) are critically involved in CRC metastasis; they have the capacity of immune activation and the ability to recognize and absorb cancer cells [56]. Under the conditions of obesity and CRC, the adipocyte microenvironment delivers immunosuppressive signals to induce DC differentiation and shift DC immune surveillance toward T lymphocyte antigen presentation; these effects are mediated by increased expression of inhibitory molecules and decreased IL-12/IL-10 levels [57].

Understanding the influence of the immune cells and platelets discussed here will provide more insight into how hyperlipidemia affects circulating tumor cells (CTCs) in CRC. CRC cells become CTCs once they enter the vasculature [64]. CTCs often exhibit both epithelial and mesenchymal traits that are a prerequisite for successful formation of a metastatic colony [5]. CTCs can potentially undergo necrosis in the bloodstream in response to high hemodynamic shear stress, which inhibits metastasis. In a hyperlipidemic state, the elevated levels of lipids would slow down the hemodynamics, and the resulting reduced flow shear stress would stimulate CTC migration [65].

After exiting the vasculature, CRC cells are most likely to metastasize to the liver [66]. The formation of distant metastasis is correlated with several modifications, especially MMP9.

At sites of metastasis, increased numbers of neutrophils release granules containing neutrophil elastase and MMP9, which remodel the ECM in the tumor microenvironment. This remodeling allows CRC cells to overcome the constraints of cell-cell and cell-matrix interactions and to migrate more freely [67]. Obesity also contributes to the recruitment and transformation of M1-macrophages into M2-macrophages [68]; this transformation is a metastasis-promoting phenotype that occurs in response to the immunosuppressive cytokines secreted by tumor tissues [69]. Taken together, these studies suggest that tumor-associated neutrophils and the macrophages involved in hyperlipidemia further accelerate CRC metastasis.

In a metastatic microenvironment, high levels of plasma triglycerides, total serum cholesterol, and saturated fatty acids contribute to ROS-induced oxidative stress [70]. ROS are produced via intracellular metabolism and include superoxide, the hydroxyl radical, and H2O2 [71, 72]. ROS degrade molecules such as PKC and protein tyrosine phosphatases and regulate downstream molecules of MAPK and PAK, which are both involved in cancer migration [6].

Obese subjects have an increased risk of non-alcoholic fatty liver disease (NAFLD) [73]. NAFLD includes steatosis and its progression to non-alcoholic steatohepatitis [74]. The NAFLD provides a microenvironment that is more susceptible to CRC metastasis by secreting increased levels of various signaling molecules, including MMPs [75]. In addition, NAFLD is associated with liver cell injury and inflammation [76]. Inflammatory cells such as neutrophils might be recruited in the NAFLD and contribute to CRC progression [77].

The metastatic microenvironment in the liver also contains stromal cells and endothelial cells [83], which exert oxidative stress under conditions of hyperlipidemia. The interaction between oxidative stress and inflammation can stimulate metastasis. Obese subjects are apt to get increased circulating VEGF level as well [84]. The elevated level of VEGF is a predictor of liver metastasis. And a higher serum VEGF level represents a worse prognostic for patients with liver metastases [85]. In addition, PIGF/VEGFR-1 signaling in obese subjects contributes to a pro-cancer immune microenvironment [86].

The progression of CRC liver metastasis under hyperlipidemic conditions 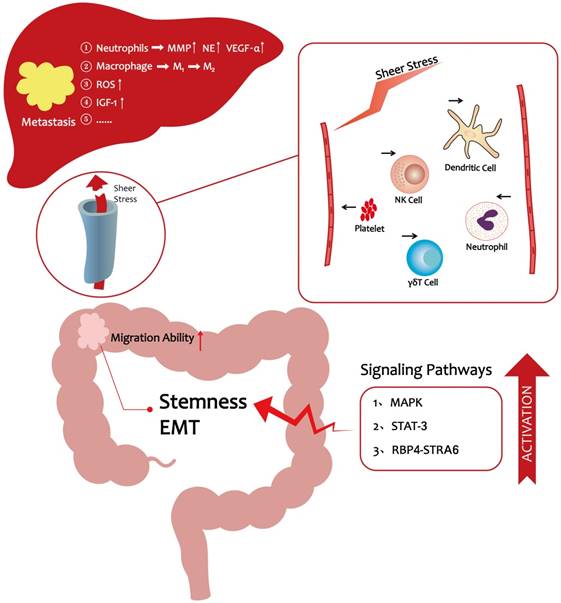 As the preceding discussions indicated, significant progress has been made over the past decade in elucidating the cellular, molecular, and signaling pathway programs that drive CRC liver metastasis. It is now evident that hyperlipidemia promotes the entry of CRC cells into the vasculature and their subsequent migration to the distant liver. A HFD lifestyle could enhance CRC cells stemness to promote their migration ability [17]. In vivo, lipids enhance platelet activation and the numbers of neutrophils to protect CRC cells from immune attack [48-50, 59, 60], thereby making it easier for cancer cells to escape from the vascular system. In a pre-metastatic microenvironment, hyperlipidemia facilitates liver metastasis via a variety of mechanisms including accumulation of tumor-associated neutrophils and ROS production (Figure 1) [6, 51]. Moreover, obesity, which is directly related to hyperlipidemia, is believed to be a risk factor for liver metastasis in CRC [21]. These observations provide novel insights into how lifestyle changes could help reduce the likelihood of CRC metastasis. For example, a low-fat diet and exercise are recommended to reduce the risk of metastasis. Clinical evidence showed that statins can reduce the mortality of CRC [16]. Statins are known to be the inhibition of Ras signaling and may activate the bone morphogenetic protein (BMP) signaling pathway in CRC cells [87]. Therefore, we wonder whether we can target Ras or BMP signaling pathway to reduce CRC metastatic properties still need to be further explored. In conclusion, CRC metastasis is highly related to hyperlipidemia, and restoration of lipid levels may reduce CRC metastasis-associated mortality.

52. Shojaei F, Singh M, Thompson JD. et al. Role of Bv8 in neutrophil-dependent angiogenesis in a transgenic model of cancer progression. Proceedings of the National Academy of Sciences of the United States of America. 2008;105(7):2640-5