Lung cancer is the leading cause of cancer death in the People's Republic of China as well as worldwide [1]. Approximately 80% of lung cancers are non-small-cell lung carcinoma (NSCLC), the overall 5-year relative survival rate for this cohort was less than 20%, patients with advanced NSCLC has an extremely high mortality rate [2]. In the past decade, the advent of personalized medicine has seen the introduction of a number of targeted treatments for the NSCLC with druggable driver gene mutations [3]. Among these, the presence of activating mutations of the epidermal growth factor receptor (EGFR) and of chromosomic rearrangements in the anaplastic-lymphoma kinase (ALK) protooncogene, have been well characterized genetic alterations with approved inhibitors to be put into the clinical practice and resulted in improved outcomes for patients [4,5]. Beyond EGFR and ALK mutations, a series of other oncogenic drivers have been identified as novel molecular targets with potential therapeutic implications, such as mutations in the genes KRAS, BRAF, HER2, PI3KCA, MET, RET [6].

KRAS is one of the most frequently mutated genes in NSCLC, which are found in approximately 30% of lung adenocarcinomas in western populations and 10% in Asian populations. Despite activating KRAS mutations are one of the most common observed genetic events in lung adenocarcinoma, little progress has been made during the past decades with no new agents being approved for this indication. Currently, platinum-containing chemotherapy remains the standard treatment regimen for advanced NSCLC patients with KRAS mutations.

In previous research, KRAS has been explored as a potential prognostic and predictive factor in patients with resected NSCLC receiving chemotherapy [15-17]. However, the results remain controversial. Until now, published data about treatment patterns and outcomes for advanced NSCLC with KRAS mutation in China have been limited. The present study aimed to characterize treatment patterns and to estimate survival for patients in China with advanced lung adenocarcinoma and KRAS mutation.

Patients who received chemotherapy were evaluated for response every two treatment cycles during treatment and then every 2 months after treatment. Patients received targeted therapy were evaluated for response one month after the initial treatment and then every 2 months during treatment. The response evaluation of the tumor to therapy was based on computed tomography (CT) or magnetic resonance imaging (MRI) scan. The short-term efficacy was defined based on version 1.1 of the Response Evaluation Criteria in Solid Tumors (RECIST) [18]. The long-term efficacy was evaluated according to the progression-free survival (PFS) and overall survival (OS). PFS was defined as the time from the initiation of treatment to the radiological evidence of PD. OS was calculated from initiation of treatment to death. Patients who were still alive till the last follow-up were recorded as censored. Patients who did not relapse or metastases were censored on the day of last follow-up.

Statistical analysis was performed using SPSS22.0 package. Statistical significance was defined as when P<0.05. The categorical variables were analyzed by chi-square tests, or Fisher's exact tests when needed. The continuous variable was compared using ANOVA and Tukey's multiple comparison tests. Survivals were analyzed using the Kaplan -Meier method and were compared using the log-rank test.

An overall characterization of cancer-related mutations identified in all patients

A total of 159 advanced lung adenocarcinoma patients treated in Zhejiang Cancer Hospital who received targeted NGS analysis (416 genes) between February 2013 and June 2017 were enrolled in this study. Patients' characteristics are described in Table 1. The median age of diagnosis was 59.0 years (ranging from 21 to 86 years), and more than half of the patients were male (66.0%). Nineteen (11.9%) patients were diagnosed as stage IIIB, and others were stage IV. 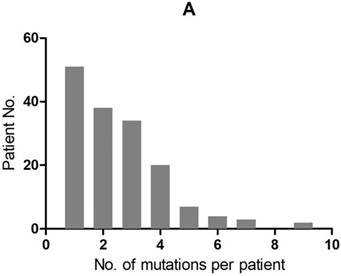 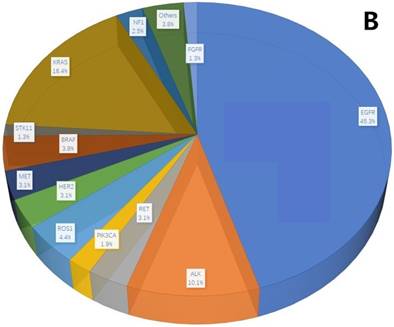 KRAS mutations were present in 5 female and 21 male with an average age of 60 years (range, 48-73 years). Six patients (23.1%) were never smokers. Histopathologic stage varied and included IIIB (n = 1) and IV (n = 25). Compared to patients with non-KRAS mutation, patients with KRAS-mutant tumors were more likely to be smokers (76.9% vs. 51.9%, P = 0.029). There were no significant differences in the gender, age, stage, metastatic sites between patients with KRAS-mutant and KRAS wild-type tumors (Table 1). More details of the 26 patients' KRAS mutations are listed in Table 2.

Treatment efficacy and survival between KRAS-mutant and KRAS-wild patients

More details of the 26 patients with KRAS mutations.

Comparison of efficacy between KRAS-mutant patients and KRAS-wild patients.

Efficacy of the first-line chemotherapy for the 93 patients were also listed in Table 3. The DCR (50.0% vs 82.1%, P=0.003) was significantly lower in the KRAS-mutant cohort than in the KRAS-wild cohort. There were no significant differences in ORR between patients with KRAS mutation and non-KRAS mutation.

A 73-year-old woman (patient case 025) was diagnosed with lung adenocarcinoma with bilateral intrapulmonary, hilar lymph node, mediastinal lymph node, and subcutaneous metastasis (cT3N2M1b IV; AJCC 7th Edition). Expanded molecular testing revealed KRAS exon3 Q61K mutation. Then she was included in the clinical trial (NCT02477826) and received 4 cycles of nivolumab plus chemotherapy (pemetrexed and carboplatin) as first-line treatment from June 8, 2017 to Aug 10, 2017. After two cycles of treatment, the patient was with rapid dramatic clinical improvement, later confirmed as an excellent radiographic partial response by computed tomography scanning (Fig 3). After then, she received 5 cycles of nivolumab plus pemetrexed as maintenance therapy from Sep 1, 2017 to Nov 24, 2017. The PFS was 6.2 months, significantly better than the median PFS of 1.5 months in the KRAS-mutant cohort. 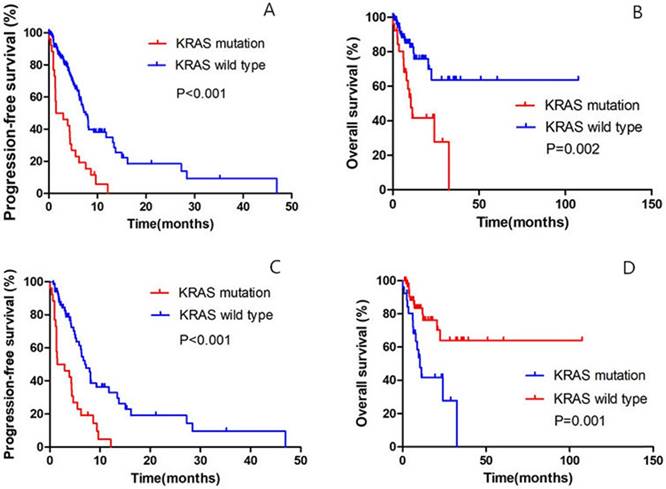 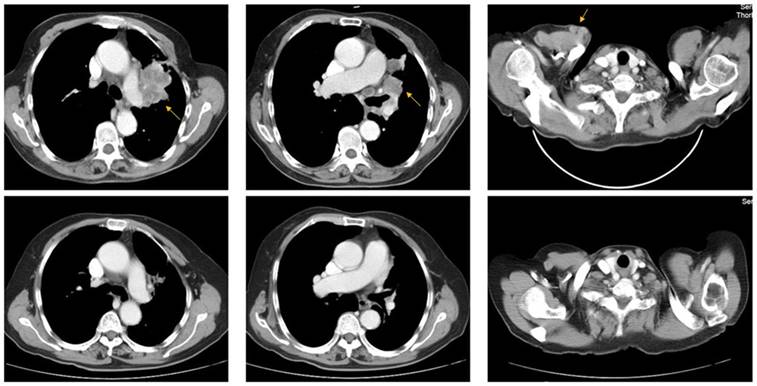 Despite the fact that activating mutations of the KRAS gene are one of the most common recurring molecular aberrations in NSCLC, its utility as a direct treatment target remains disappointing [26]. In our study, all the 26 patients with KRAS mutations received chemotherapy as the first-line treatment. In the KRAS-wild group, 66 patients received targeted therapy and 67 patients received chemotherapy as the first-line treatment. The results demonstrated that both in the general cohort (n=159) and in the subgroup cohort (n=93) receiving first-line chemotherapy, KRAS mutations were associated with lower DCR, shorter PFS and OS. As far as we know, this is the first research from a single center in China, suggesting that the KRAS mutation is a poor predictive and prognostic indicator in advanced lung adenocarcinoma. Although the analysis of OS may be confounded by the long-periods tumor control of the KRAS-wild patients with actionable mutations who received targeted drugs, at least we can conclude that KRAS mutations have negative predictive and prognostic effect on efficacy and PFS for advanced lung adenocarcinoma receiving first-line chemotherapy.

Actually, conclusions about the prognostic value of KRAS mutations in NSCLC remain controversial. An initial research demonstrated that KRAS mutations were associated with poor disease-free survival (DFS, P=0.038) and OS (P=0.002) in resected NSCLC [27]. However, this result has not been reproduced at the E4592 trial in which KRAS mutations were not found to be prognostic for OS [28]. The results of a meta-analysis of resected NSCLC receiving adjuvant chemotherapy corroborate this finding, which showed that KRAS-mutant patients had the same prognosis as KRAS-wild patients [29]. The results of research exploring the prognostic value of KRAS mutations in advanced NSCLC seem to be more consistent. In a meta-analysis of 43 trials that included 5216 patients, KRAS mutations as an adverse prognostic factor for OS in advanced lung adenocarcinoma has been confirmed [30]. A recently published meta-analysis including more than 1000 III/IV TNM stage lung adenocarcinoma has also indicated that patients with KRAS mutations had a significantly shorter OS and PFS compared to wild-type lung cancer patients. However, in those studies authors did not collect the data of patients' treatment and the predictive role of KRAS mutations in such cohort receiving chemotherapy have not been analyzed [31].

The co-existence of TP53 mutations was observed in 13 (50.0%) of patients with KRAS mutations in our results, which was consistent with previous report. Recently, lung adenocarcinoma with the co-existence of TP53 mutations and KRAS mutations were shown to have higher levels of TMB and inflammation markers, which may be helpful to select patients who will benefit from immune checkpoint blockade and other novel immunotherapy approaches [35, 36]. In our study, we found the similar result: the median TMB was significantly higher in the KRAS-mutant group than in the KRAS-wild group. In addition, in our current study, one patient with KRAS mutation (patient case 025) was included in the clinical trial (NCT02477826) and received 4 cycles of nivolumab plus chemotherapy (pemetrexed and carboplatin) as first-line treatment and later confirmed as an excellent radiographic PR as well as a relative long PFS. This case confirms the previous finding that NSCLC patients with KRAS mutation may benefit from checkpoint inhibitors. In a previous research investigating the potential relevant gene expression signatures that predict efficacy of checkpoint blockade, the results demonstrated TP53 and KRAS mutation had remarkable effect on increasing PD_L1 expression, facilitating T cell infiltration and augmenting tumor immunogenicity. And patients with TP53 and/or KRAS mutation showed sensitivity to PD_1 blockade [37]. Due to failure of therapeutic targeting drugs and unsatisfactory response to conventional chemotherapy in KRAS-mutant lung adenocarcinoma, it is worth exploring the role of immune checkpoint inhibitor in such cohort. In our future studies, we plan to collect more data from KRAS-mutant patients to analyze the TMB information and the value of immunotherapy.

In summary, our findings have several important implications for the molecular characterization and therapeutic outcome of lung adenocarcinoma initiated by oncogenic KRAS. First, this study identified KRAS mutations in about 16.4% of Chinese patients with lung adenocarcinoma. Due to the large population base and the first incidence of lung cancer in China, it can be anticipated that the number of KRAS-mutant lung cancer is considerable, which should be taken seriously in clinical diagnosis and treatment. Second, KRAS-mutant patients were associated with lower DCR, shorter PFS and OS than KRAS-wild patients receiving first-line chemotherapy. This indicates that new and effective drugs targeting the KRAS pathway are in urgent need. Third, the co-existence of TP53 mutations was observed in half of patients with KRAS mutations and the median TMB was significantly higher in the KRAS-mutant group than in the KRAS-wild group. Therefore, clinical trials enrolling patients with KRAS-mutant NSCLC should take into account the co-mutation status of individual tumors.

This emphasizes the significance of comprehensive genomic profiling in assessing patients with NSCLC.

This work was supported by National Natural Science Foundation of China (Grant No.81702248).

8. Welman A, Burger MM, Hagmann J. Structure and function of the C-terminal hypervariable region of K-Ras4B in plasma membrane targeting and transformation. Oncogene. 2000;19(40):4582-91