Background: We designed a single-arm, open-label phase II study to determine the efficacy and toxicity of pemetrexed monotherapy with vitamin supplementation in patients with refractory colorectal cancer (CRC) that failed to respond to standard treatments including 5-fluorouracil, oxaliplatin, and irinotecan with or without biologic agents.

Methods: Patients were treated with pemetrexed 500 mg/m2 on day 1 every 3 weeks, with folic acid and vitamin B12 supplementation. Treatment was continued until disease progression or intolerable toxicity. Between June 2016 and October 2016, 24 patients were enrolled in this study.

Results: One patient withdrew consent, leaving a total of 23 patients for evaluation. The median age of the patients was 54.0 years (range, 23.0 to 67.0), and the median ECOG performance status was 1 (1-2). The median number of previous systemic chemotherapies was 3 (range, 2 to 5). There was no patient with complete response (CR) or partial response (PR). However, stable disease was observed in 10 patients (43.4%) and maintained more than 6 months in 7 of 10 patients. The median progression-free survival was 1.6 months (95% CI, 1.1-2.0) and the median overall survival was 9.8 months (95% CI, 5.9-13.6). Grade 3 treatment-related adverse events occurred in one patient with elevated liver enzymes and hematologic adverse event of grade 2 anemia was observed in one patient. There were no cases of dose reduction or treatment-related deaths and all toxicities were manageable.

Colorectal cancers (CRCs) were the third most common cause of cancer death worldwide in 2015, accounting for 774,000 deaths [1]. Although mortality from CRC decreased by almost 35% from 1990 to 2007 [2], about 50-60% of patients present at a late stage of disease when the 5-year survival rate is only 10-12%, according to a report from Cancer Treatment Centers of Americaⓡ (CTCA). Palliative chemotherapy is the only option for the majority of these patients. 5-Fluorouracil (5-FU) is the basis of treatment for CRC. 5-FU alone is effective for metastatic disease, but its efficacy is improved when oxaliplatin [3] or irinotecan [4, 5] is added. The combination of cytotoxic chemotherapy and biologic agents improves the overall survival (OS). With advances in systemic chemotherapy for metastatic CRC, median OS has increased from 12 months with 5-FU monotherapy to approximately 2 years with the addition of oxaliplatin, irinotecan, and targeted or biological agents [6, 7]. However, most patients ultimately develop resistance to these therapies and experience disease progression. Unfortunately, these patients with refractory disease have few additional treatment options.

Pemetrexed, a multi-targeted antifolate agent that inhibits several folate-dependent enzymes involved in DNA synthesis, exhibits single-agent activity against a number of solid tumors, including non-small cell lung cancer; mesothelioma, and pancreas, colorectal, gastric, bladder, breast, and head and neck cancers [8]. Zhang et al. demonstrated that six colorectal cancer cell lines exhibited concentration-dependent sensitivity to pemetrexed [9]. Pemetrexed has been evaluated in patients with advanced CRC in two phase II studies [10, 11]. According to these studies, the response rate was 15-17%, and the median time to progression was 3-4 months. However, no vitamin supplementation was used in either trial, and more than half of the patients presented severe hematologic toxicities.

The aim of this study was to evaluate the clinical benefit and tolerability of pemetrexed monotherapy with vitamin supplementation in patients with metastatic CRC refractory to standard treatment, including 5-FU, oxaliplatin, and irinotecan with or without biologic agents.

This was a non-comparative single-center phase II study (Clinical Trials.gov Identifier: NCT02588781). It was conducted in accordance with the ethical principles of the Declaration of Helsinki and the Korea Good Clinical Practice. All participating patients provided signed informed consent before enrollment.

Patients enrolled in this study had measurable histologically confirmed metastatic and/or recurrent CRC. All patients had previously received 5-FU, irinotecan, and oxaliplatin, with biological agents such as cetuximab or bevacizumab. They were required to be at least 20 years old and have at least one measurable lesion and an Eastern Cooperative Oncology Group (ECOG) performance status of 0-2. Adequate hematologic function (absolute neutrophil count ≥ 1.5 × 109/L, platelet count ≥ 100 × 109/L), hepatic function (aspartate aminotransferase/alanine aminotransferase [AST/ALT] ≤ 2.5 times the upper normal limit (UNL), total bilirubin 1.5 times the UNL), and renal function (serum creatinine ≤ 1.5 times the UNL) were required. Patients with an acute active infection and those with prior history of another malignancy within five years of entry into the study, apart from non-melanoma skin cancer or carcinoma in situ of the uterine cervix, were excluded from participation in this study. All patients provided written informed consent according to the guidelines provided by the institutional review board.

Assessment of efficacy and toxicity

Tumor response was routinely assessed by computed tomography (CT) scan every two cycles until disease progression. The response was evaluated using a method identical to that used in Response Evaluation Criteria in Solid Tumor (RECIST) ver. 1.1. Patients with a complete or partial response required a confirmatory response evaluation at least 4 weeks later. Thus, overall response in this study represents the best response during the treatment period. Patients without a confirmatory evaluation were not regarded as responders. Toxicities were assessed according to the National Cancer Institute Common Toxicity Criteria ver. 4.0.

According to Fleming's single stage design, a sample size of 22 was required to accept the hypothesis that the true response rate (RR) is greater than 10% with 80% power and to reject the hypothesis that the RR is less than 1% with a 1-sided alpha of 5%. Although the target number of patients was 22, we planned to recruit 10% more than the target number to account dropout. Descriptive statistics were reported as proportions and medians. Kaplan-Meier estimates were used in the analysis of all time-to-event variables, and the 95% confidence interval (CI) for the median time to event was computed.

Between June 2016 and October 2016, 24 patients were enrolled in this study. One patient withdrew consent and the remaining 23 patients was evaluated. The clinical characteristics of the enrolled patients are shown in Table 1. All patients were Asian. The median age of the patients was 54 years (range, 23-67 years), and the majority (60.8%) of patients were male. Most patients had an Eastern Cooperative Oncology Group (ECOG) performance status of 1, except for one patient who had ECOG status of 2. Approximately half (52.1%) of the patients had descending colon as the primary tumor site, followed by rectum and ascending colon. There were 11 patients with KRAS mutant-type disease. The median number of previous systemic chemotherapies was 3 (range, 2-5). All enrolled patients received prior bevacizumab-containing treatment, and 10 patients with KRAS wild type received prior cetuximab-containing therapy. The median time from diagnosis to treatment was 30.1 months (range, 7.4-125.7 months).

Number of cycles of pemetrexed administration for all patients. 7 patients received six or more cycles, and two of them have still been received pemetrexed at time of writing. The arrow indicates that treatment is ongoing. 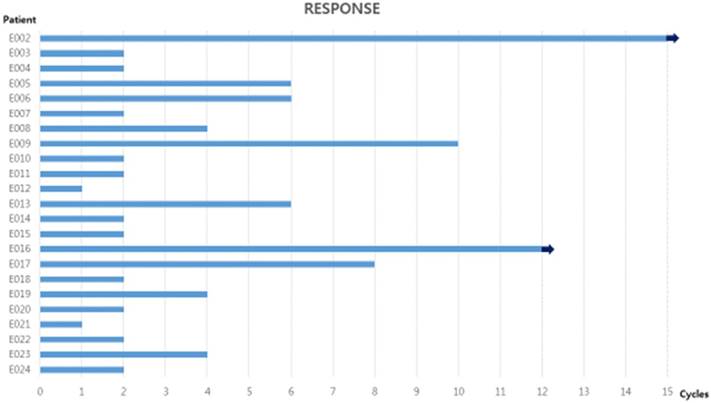 In total, 99 cycles were administered, with a range of 1-15 cycles and a median of two cycles per patient. Out of 23 patients, 7 received six or more cycles, and two of them have still been received the study drugs (Figure 1). The relative dose intensity of pemetrexed was 100%, and no dose reduction was required.

Data were analyzed in April 2017, six months after the time of the last patient registration. Two patients received only one cycle of pemetrexed and then were lost follow-up. The response evaluation was performed in the intent-to-treat group, therefore, 23 patients were assessable for treatment response. Response efficacy is presented in Table 2. There was no patient with CR or PR. However, stable disease was observed in 10 patients (43.4%) and maintained more than 6 months in 7 of 10 patients (Figure 1). 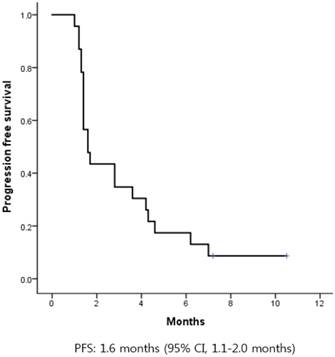 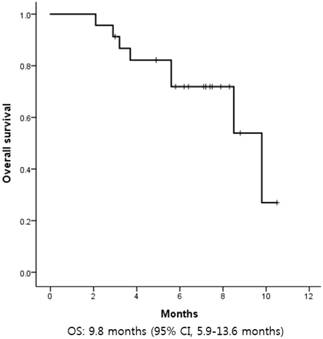 The current study is the first to investigate the treatment outcomes and safety of pemetrexed monotherapy in CRC patients who previously received standard chemotherapies including biologic agents. In the present study, pemetrexed monotherapy showed modest antitumor activity and tolerable toxicity. In a previous phase II study of first-line pemetrexed without vitamin or folic acid supplements, Common Terminology Criteria for Adverse Events (CTCAE) grade 3 or 4 hematologic adverse events were commonly identified, including thrombocytopenia in 18%, neutropenia in 55%, and anemia in 18% of cases [11]. However, only one patient in our study showed a hematologic adverse event of grade 2 anemia (4%), indicating that pemetrexed was well tolerated when administered with vitamin and folic acid. Although few patients who received pemetrexed achieved an objective tumor response, 10 (43.4%) achieved disease control. Considering that pemetrexed was the third-line treatment or greater in these patients, this is considered an acceptable efficacy.

There have been some challenges in identifying the optimal treatment for refractory CRC after failure of standard therapy [12-14]. A recent phase III trial (CORRECT) demonstrated an improvement in overall survival (OS) among patients treated with regorafenib in comparison to those randomly assigned to receive best supportive care after progression on standard therapy (6.4 versus 5.9 months, respectively) [15]. In the CORRECT trial, regorafenib also showed a response rate (RR) of 1.0%, disease control rate (DCR) of 41%, and median PFS of 1.9 months (95% CI, 1.6-3.9 months). However, among patients assigned to the regorafenib group, grade 3 or 4 treatment-related adverse events occurred in 207 (54%) and the dose was reduced in 188 (38%) patients. These toxicity profiles of regorafenib have been considered the main hurdle to broad application of regorafenib for heavily treated metastatic CRC. Palliative chemotherapy in patients with metastatic CRC can improve survival, reduce symptoms, and improve quality of life for patients with unresectable disease. When considering chemotherapy after failure of standard chemotherapy, oncologists must consider the degree and profile of toxicity for the intended chemotherapeutic agents. Although no patients showed a response to pemetrexed in the present study, 10 (43.4%) showed stable disease and four maintained stable disease for longer than 8 cycles. In comparison of pemetrexed in this study with regorafenib in the CORRECT trial, the disease control rate was similar (43.4% vs. 41%) and overall survival was much longer for pemetrexed than for regorafenib (9.8 months vs. 6.4 months). Moreover, in terms of toxicity profile, pemetrexed seemed to be better tolerated than regorafenib. In our study, pemetrexed was well tolerated with an acceptable toxicity profile, consisting mostly of grade 1 or 2 adverse events. In particular, there was only one case of hematologic toxicity (4%), which is superior to a previous trial of pemetrexed in CRC [10, 11]. This difference might be due to adequate vitamin supplementation and premedication with dexamethasone. Even though the population of the present study was composed of heavily treated CRC patients, the relative dose intensity of pemetrexed was 100% and no patient required dose reduction. Furthermore, among all 23 patients, 4 were treated with regorafenib before entry in this study, and 2 patients received regorafenib after failure of pemetrexed. Therefore, considering its tolerability pemetrexed could be used in patients who have already received or are planned to receive regorafenib.

The present study has some limitations, such as a heterogeneous patient population, single-center trial, and failure to achieve the primary endpoint of the study. Above all, the number of patients is too small to reach a solid conclusion. Nevertheless, considering the tolerability and the disease control rate, pemetrexed should be studied further as a salvage option for refractory CRC. In non-small cell lung cancer (NSCLC) cells, synergistic interactions of pemetrexed with erlotinib and epidermal growth factor receptor tyrosine kinase inhibitor have been reported [16, 17]. Some studies have shown promising effects of a combination regimen of pemetrexed and erlotinib in patients with NSCLC [18, 19]. Recently, pemetrexed plus erlotinib was reported to show antitumor activity in colon cancer cell lines. We also observed that addition of erlotinib to standard chemotherapy improved the treatment outcome in EGFR-overexpressing metastatic biliary cancer. Therefore, as a next step, we plan to conduct a phase II trial using pemetrexed plus erlotinib in EGFR-overexpressing refractory CRC.

Pemetrexed was kindly provided by Dong-A for this study. Clinical research grants were supported by Dong-A (S.T. Kim). The other authors have no potential conflicts of interest to declare.