Background and Aim: MicroRNAs, dysregulated in the circulation of esophageal squamous cell carcinoma (ESCC) patient, have been assumed to be with great potential in the diagnosis and prognosis of esophageal cancer. We aimed to review previous articles on ESCC.

Methods: A search of electronic databases was performed before Nov 12, 2017. We summarized the identification of microRNA imbalance in the blood of ESCC compared with the healthy controls, with the objective to evaluate the efficiency of microRNAs in diagnosing and forecasting ESCC.

Results: A total of 35 studies investigating plasma or serum microRNAs were included in the meta-analysis. Based on the consequences of the quality assessment of each study, the articles involved were appropriate for quantitative synthesis. For diagnostic meta-analysis. The overall pooled sensitivity, specificity, and area under the curve of circulating microRNA is 0.794 (95% CI: 0.765 - 0.820), 0.779 (95%CI: 0.746 - 0.808), 0.86 (95%CI: 0.82 - 0.88). The diagnostic value of each microRNA was calculated respectively. For prognostic meta-analysis, the overall pooled hazard ratios of higher microRNA expression in circulation was 1.34 (95% CI: 1.14-1.58), which could significantly predict poorer survival in ESCC.

Conclusions: Circulating microRNAs distinguish patients with ESCC from healthy controls with high sensitivity and specificity, compared to other invasive currently used screening methods. Simultaneously, there was prognostic value for the prognosis of ESCC.

Cancer is currently the secondary lethal cause in the world, only inferior to cardiovascular disease [1,2]. Esophageal squamous cell carcinoma (ESCC), with the tenth highest cancer morbidity and the sixth highest mortality rate, gradually gained worldwide attention [3]. Although with effective and positive treatment, there are still serious challenges waiting to be resolved about the diagnosis and prognosis of esophageal cancer [4]. Nowadays, endoscopy examination and pathological biopsy are still the golden standard methods for detecting ESCC, while imaging examination lacks a certain timeliness due to its insensitivity to small lesions [5,6]. Nevertheless, patients tend to be reluctant to carry out endoscopic examination because of its intrusiveness and discomfortableness. Conventional biomarkers, such as carcinoembryonic antigen (CEA), carbohydrate antigen 19-9 (CA19-9) and squamous cell carcinoma antigen (SCC), are short of sensitivity and specificity to accelerate the early detection of cancer [7-9].

There aren't highly effective prognostic molecular markers that can forecast the clinical outcome and hereafter furnish guidance for treatment. An aberrant exaltation of the serum SCC antigen level is an effective predictor of advanced esophageal cancer correlative to poor survival after esophagostomy. Serum CEA levels are assumed to be significant in predicting clinically unapparent distant metastasis [7]. Hence, there is an enormous requirement to probe fresh and efficient means for ESCC prognosis.

MicroRNAs, non-protein-coding RNA molecules, play an important role in cell differentiation, cell-cycle progression, apoptosis, and tumorigenesis [10,11]. Substantial researches have been performed on the appliance of microRNA expression to distinguish between ESCC patients and healthy controls, suggesting the great capacity of microRNA as a novel biomarker in screening ESCC. In the meantime, based on considerable evidences, microRNAs are deemed to be an effective predictor of the clinical outcome owing to its expression level is significantly related to the prognosis of ESCC patients. Therefore, it is essential to summarize the diagnostic efficiencies of these microRNAs via a systematic review.

However, one of the meta-analyses investigated the value of diagnosis and prognosis of single microRNA [12]. Moreover, several researchers combined various microRNAs to get conclusions about the value of all microRNAs in ESCC, but overlooked the heterogeneity in diverse microRNAs from inconsistent sample sources [13-16]. Taking into consideration the drawbacks of previous publications, a more integrative meta-analysis of microRNA for ESCC, on the basis of all relevant prior studies, was conducted to acquire a better understanding of the diagnostic and prognostic efficiency of microRNA in ESCC.

An electronic search of PubMed, Embase and the Chinese Biomedical Literature Database (CBM) was performed for relevant articles published until Nov 12, 2017. The search strategy was (miRNA OR microRNA OR miR) AND ("esophageal neoplasms"[Mesh] OR "esophageal squamous cell carcinoma" OR "esophageal carcinoma" OR "esophageal adenocarcinoma") AND (blood OR serum OR plasma OR circulating) AND (diagnosis OR diagnostic OR diagnose OR prognosis OR prognoses OR prognose OR predict OR prognostic). No language restrictions were set. Duplicates were removed. By screening the title and abstract, eligible manuscripts were obtained for full-text review. The flow-process diagram for the literature is presented in Fig. 1. 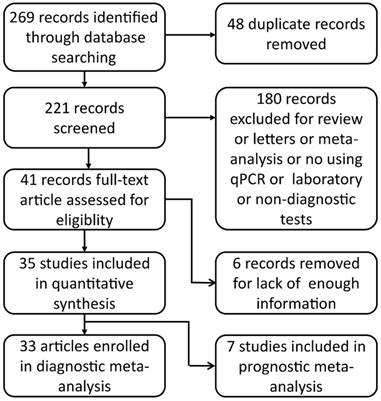 For eligible studies to be enrolled, the following criteria had to be fulfilled [17]: (1) studies were conducted comparing ESCC patients versus healthy controls; (2) samples were restricted to serum or plasma; and (3) methods had to include quantitative real-time PCR techniques. Articles were excluded based on the following criteria: (1) review articles, letters or meta-analysis, (2) studies with duplicate data reported in other studies, (3) laboratory studies.

Quality of all studies included in meta-analysis are systematically assessed based on the criteria as proposed by the Quality Assessment of Diagnostic Accuracy Studies 2 (QUADAS-2) [18]. For prognostic meta-analysis, information and data were analyzed as previously described.

Each study for diagnosis and prognosis was retrieved and assessed independently by two investigators (CY and HNL). Any discrepancies were resolved by consensus. The extracted data and information included as following: the first author, year of publication, country of origin, ethnicity, characteristics of cases, characteristics of controls, type of blood-based fluid (serum or plasma), reference microRNA and clinical outcomes.

Diagnostic meta-analysis was performed to determined sensitivity, specificity and area under the curve (AUC) of the summary receiver operating curve (SROC) of all microRNAs identified by previous diagnostic tests [19]. For prognostic meta-analysis, hazard ratios (HRs) and 95% confidence intervals (CIs) were calculated. Forest plots were used to estimate the effect of microRNA expression on overall survival (OS) and progression free survival (PFS). The percentage of Higgins I-squared statistic (I2) was used to quantify the heterogeneity. A random effect model would be used if I2 > 50%, otherwise the fixed effect model was applied. Publication bias of diagnostic tests was considered by Deeks' funnel plot asymmetry test [20], while that of prognostic tests was estimated by Egger's test [21] and Begg's test [22], respectively. Level of significance was set at p < 0.05. All data analyses were computed with the Stata 12.0 (StataCorp LP, College Station, TX, USA) and Revman 5.2 (The Nordic Cochrane Centre, Copenhagen, Denmark).

Characteristics of the included studies.

QUADAS-2 quality assessment. Investigators' assessment regarding each domain for included studies. Risk of bias and applicability concerns' (A) graph and (B) summary. The article ID is same as that in Table 1. 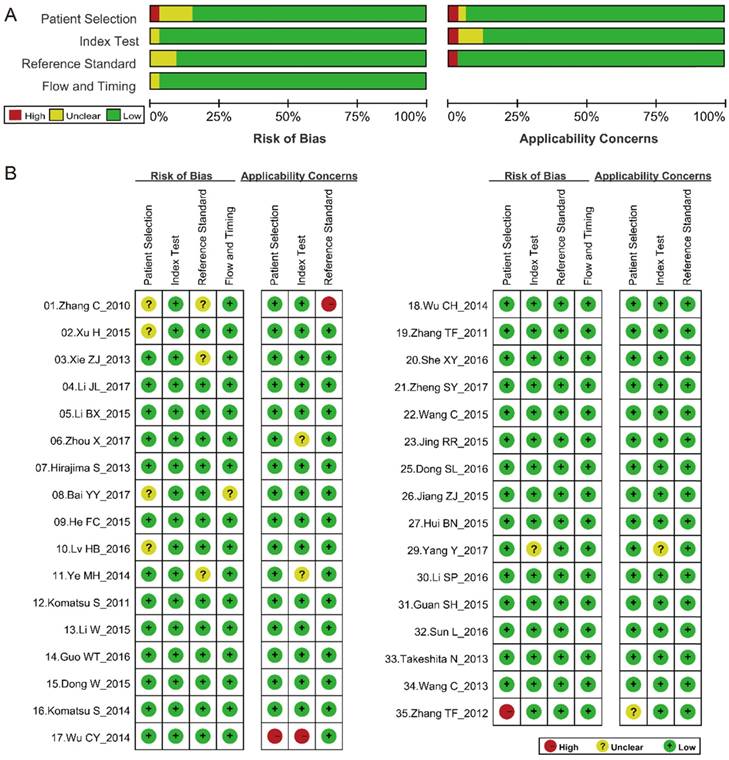 We assessed the quality of the 33 studies according to the QUADAS-2 assessment tool (Fig. 2). Of the articles included, three were considered to be deficient in patient selection and reference standards [48,55,56], while other articles were considered to have higher quality.

Studies that reported dysregulated microRNAs in ESCC cases compared with healthy controls, together with the corresponding AUC and sensitivity and specificity for the very microRNA, were enrolled in the meta-analysis. With these criteria, 43 individual microRNAs were included in 33 studies. The diagnostic accuracies for each microRNA are presented in Table 2.

Diagnostic accuracies of the microRNAs mentioned in the literature.

Circulation biomarkers are often used to diagnose early stages of ESCC. Invasive tests, by contrast, are inconvenience to monitor the progress of the ESCC, while are often rejected by patients because of their discomfort. The development of suitable biomarkers is crucial for diagnosing cancer and predicting the outcome of patients. Traditional biomarkers lack the sensitivity and specificity of early minimal lesions [7-9]. Currently, microRNAs are emerging as promising biomarkers to fill the gaps in early diagnosis and prognosis [57].

In circulation, microRNAs are stable by virtue of being bound to Argonaute proteins, and avoid the degradation by RNases [58]. As were reported in previous researches, various microRNAs were found to be abnormally expressed in malignant tumors of esophagus, stomach, large intestine, liver, pancreas, lung and ovary [59,60]. This suggests that these microRNAs can be used as biomarkers for cancers. Thousands of microRNAs have been discovered, some of which have significant diagnostic and prognostic value in ESCC [16]. To comprehensively analyze the value of microRNAs as biomarkers, we performed a meta-analysis of each microRNA, while more literatures than previous meta-analyses were included. 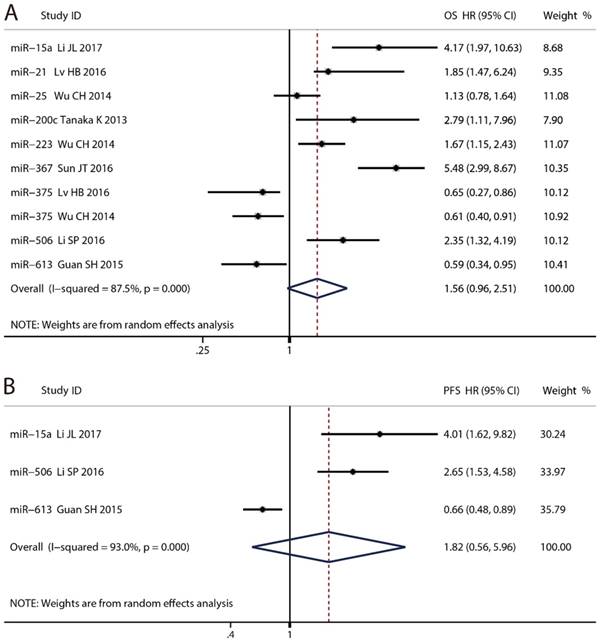 Our meta-analysis reviewed 35 articles and included over five thousand people. There were 28 up-regulated microRNAs and 11 down-regulated microRNAs, while four microRNAs were reported up-regulated and down-regulated in different studies. It is generally believed that the AUC value is greater than 0.9 with high diagnostic value, and the value is between 0.7 and 0.9 with moderate value. If it is less than 0.7, diagnostic value is usually low. In this study, five microRNAs, which were miR-15a, miR-22, miR-31, miR-451 and miR-1297, had high diagnostic value. 32 microRNAs had moderate diagnostic value, and six had low value. Circulation microRNAs achieved a pooled sensitivity of 0.794, specificity of 0.779, AUC of 0.86, and the DOR value was 13.518. The likelihood ratio (PLR and NLR), which are not affected by the prevalence rate, is more clinically meaningful for our diagnostic accuracy. A PLR value of 3.584 and an NLR value of only 0.265 implied that circulation microRNAs were clearly able to discriminate ESCC patients from healthy people. 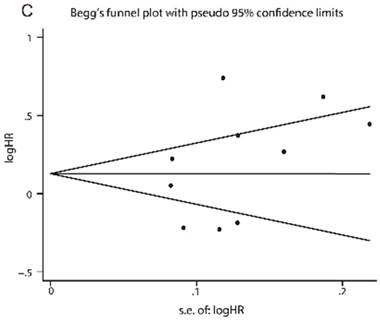 MicroRNAs have its superiority and weaknesses. Compared to endoscopic biopsies, microRNAs are more readily accepted by patients because of the invasiveness. MicroRNAs are more sensitive and specific than traditional serum markers [7]. In addition, microRNA is still stable after the treatment including boiling, freeze-thaw cycles, acid and alkali treatment [61]. The combination of microRNAs would make further efforts to increase the diagnostic efficiencies [24,28,31,38,48]. Novel and high-performance diagnostic panels of varies combinations of microRNAs should be developed in follow-up studies. However, the cost of microRNA detection is higher than the traditional means, which may affect the wide range of applications of this measure. There were several noteworthy limitations in the present research that should not be overlooked. The study population came from different sources, which suggests that inclusion criteria may be different. Additionally, the ethnicities of the study were restricted to Asians, which may affect the representativeness of the results. The incidence rate in East Asia is the highest, which may be attributed to genetic factors partially [62].

Up-regulation or down-regulation of microRNAs may be related to the different sources of microRNAs in different tumors. As has been reported, blood-based microRNAs are not only synthesized from blood cells but also from the tissues cell, subject to a variety of internal environment and mechanisms such as the appearance and progression of the tumor [61,63], implying that the dysregulated microRNA plasma levels in ESCC patients could be secreted actively or passively by tumor cells. This may explain why different microRNAs are up-regulated or down-regulated. In our study, four microRNAs were reported up-regulated and down-regulated in different studies simultaneously, which could be caused by the choice of reference RNA, the dosage of reagents, the operating process without standardization and the heterogeneity of patients [19].

Now the relationships between circulating microRNAs and ESCC seemingly have been clearly understood. The source of microRNAs is derived from blood cells or tissue cells with different possible mechanisms, whatever the generating mechanism of the microRNAs might be, their circulating levels can be monitored and used for diagnostic and prognostic indicators. In the future, microRNAs may be used as relatively non-invasive circulating biomarkers of ESCC.