Additional Cervical Lymph Node Biopsy is Not a Significant Prognostic Factor for Nasopharyngeal Carcinoma in the Intensity-Modulated Radiation Therapy Era: A Propensity Score-matched Analysis from an Epidemic Area

Introduction: This study aimed to evaluate the prognostic value of cervical lymph node biopsy and whether different biopsy methods would lead different outcomes in NPC in the intensity-modulated radiotherapy (IMRT) era.

Conclusions: Pretreatment cervical lymph node biopsy is not associated with impaired survival in NPC, suggesting the resist of the biopsy and more aggressive treatment after the biopsy may be unnecessary.

Nasopharyngeal carcinoma (NPC) is a unique malignancy with marked racial and geographical differences. Compared with an incidence in the United States of 0.5 to 2 per 100,000 [1], the crude incidence of NPC in China was 3.09/100,000 in 2012 [2]. Notably, the highest incidence was found in South China, which was 3.4 times higher than the second highest area - Southwest China.

Patients with NPC may remain asymptomatic for a long time, and 3-5% of patients present with a neck mass when primary symptoms are absent [3, 4]. Conventional tests, such as fiber optic examination and biopsy of the primary site, were recommend for diagnosis in previous National Comprehensive Cancer Network (NCCN) guidelines [5]. In the latest guidelines [6], fine-needle aspiration biopsy (FNAB) of the neck was added. However, neck biopsy was not recommended in the European Society for Medical Oncology (ESMO)-European Society for Radiotherapy & Oncology (ESTRO) Clinical Practice Guideline for NPC in 2012 [7].

Previous studies regarding lymph node biopsy in NPC also reported different outcomes. In the last century, a study from North America [8] asserted that pre-irradiation node biopsy might result in poorer survival; however, another study, mainly based on a Chinese population [9], stated the oppose opinion. Since intensity-modulated radiotherapy (IMRT) entered clinical practice at the end of the last century, great improvements in survival have been achieved [10, 11]. Moreover, the addition of chemotherapy also reduced the mortality of NPC [12]. IMRT is the current standard of treatment for NPC, and additional chemotherapy has been applied widely to patients in the advance stage. However, it remains unknown whether the addition of cervical lymph nodes biopsy might change the chance of survival in IMRT era. Recently a population-based study [13] concluded that pretreatment neck biopsy was not associated with lower overall survival but in differentiated non-keratinizing carcinoma group, lymph node biopsy had an independent adverse effect on survival. Nevertheless, as a propensity-score-match study, the data failed to assess some important elements, including EBV-DNA, chemotherapeutic regimens, radiotherapy techniques, and radiation dose.

Moreover, NPC is a solid tumor with no symptoms except for a neck mass, which is easy to confuse with lymphoma; therefore, lymph node excision biopsy is the main method of neck biopsy in NPC. Image-guided needle biopsy has been recommended by some authors for diagnosis because of its comparable accuracy, higher tolerability, better economic applicability, and fewer post-procedural complications and delays [14, 15]. However, few of these studies investigated the prognostic value of different biopsy methods. Therefore, whether needle biopsy or excision biopsy are associated with different prognoses requires further discussion.

This study aimed to verify the impact of cervical lymph node biopsy and further investigate whether different biopsy methods would lead to different outcomes of NPC in the IMRT era.

A cohort of 1492 patient with NPC who were treated at Sun Yat-sen University Cancer Center with IMRT between January 2010 and September 2013 were retrospectively reviewed. All the patients were newly diagnosed as non-metastatic NPC with biopsy and magnetic resonance imaging (MRI) of nasopharynx and neck, chest radiography or computed tomography (CT), abdominal sonography or CT, and technetium-99m-methylene diphosphonate whole-body bone scan, and/or [18F] fluorodeoxyglucose positron emission tomography and CT. Patients were retrospectively re-staged according to the 8th edition of UICC/AJCC staging system.

IMRT were delivered as the primary treatment to the patients once daily with five fractions per week. Prescribed radiation doses were 68-70 Gy in 30-33 fractions at 2.13-2.27 Gy/fraction to the planning target volume (PTV) of GTV-P, 60 Gy to the PTV of CTV-1 (high-risk regions), 54 Gy to the PTV of CTV-2 (low-risk regions and neck nodal regions), and 60-68 Gy to the nodal gross tumor volume (GTV-N) in 30-33 fractions.

Patients' refusal, age (≥ 70 years), organ severe dysfunction (diabetes, cardiac dysfunction, renal insufficiency, liver insufficiency, et al) that would suggest intolerance to chemotherapy may led to deviation from institutional guidelines. IC regimen consisted of docetaxel/ paclitaxel plus cisplatin/nedaplatin, cisplatin/nedaplatin plus fluorouracil, or docetaxel/paclitaxel plus cisplatin/nedaplatin plus fluorouracil given every 3 weeks for 2 to 3 cycles before radiotherapy. CC regimen consisted of 80 to 100 mg/m2 cisplatin given every 3 weeks for 2 to 3 cycles, or 30 to 40 mg/m2 cisplatin given weekly for up to 7 cycles.

The SPSS 22.0 software package (SPSS Inc., Chicago, IL) was applied for all statistical analyses. Baseline characteristics were compared between groups using the χ2 test (categorical variable), and standardized difference. Survival analyses were conducted using the Kaplan-Meier method, and the log-rank test was used to compare the differences.

This study calibrated selection bias and confounding bias using PSM for randomization. The original data were used for logistic regression to calculate propensity scores in the control group and treatment group.

a: All the factors was analysed using χ2 test (categorical variable)

c: The boundary was based on the previous study from the same center.

d: According to the 8th edition of the American Joint Committee on Cancer (AJCC) stage classification. 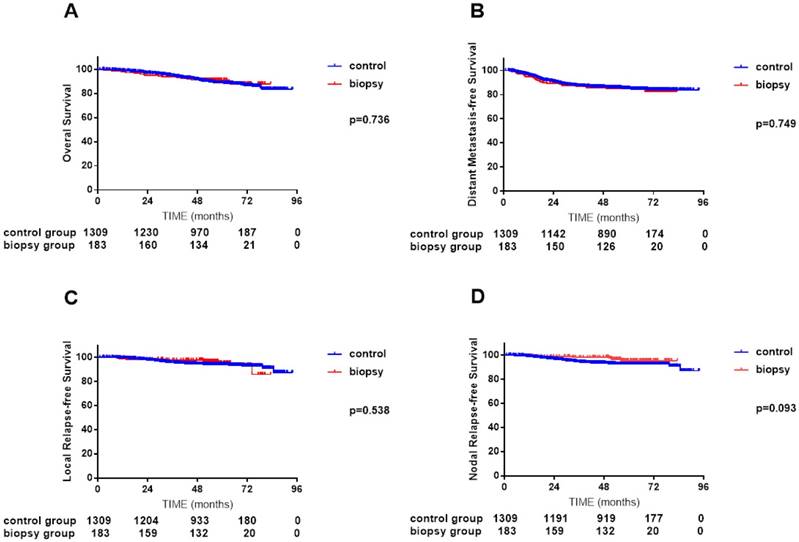 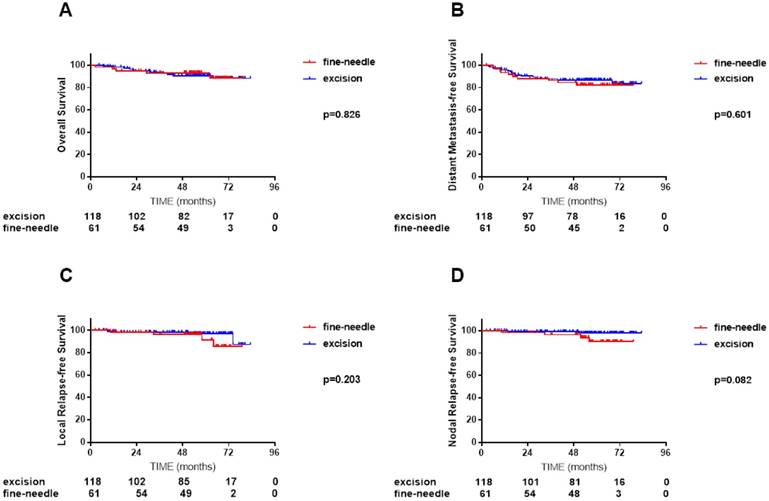 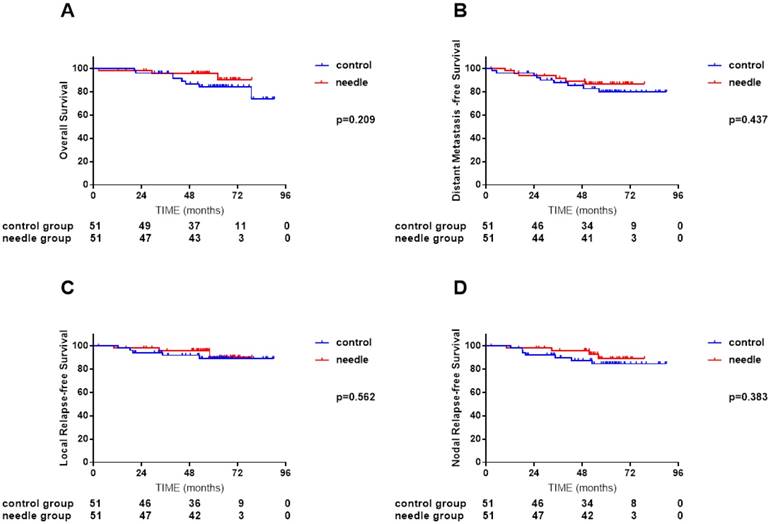 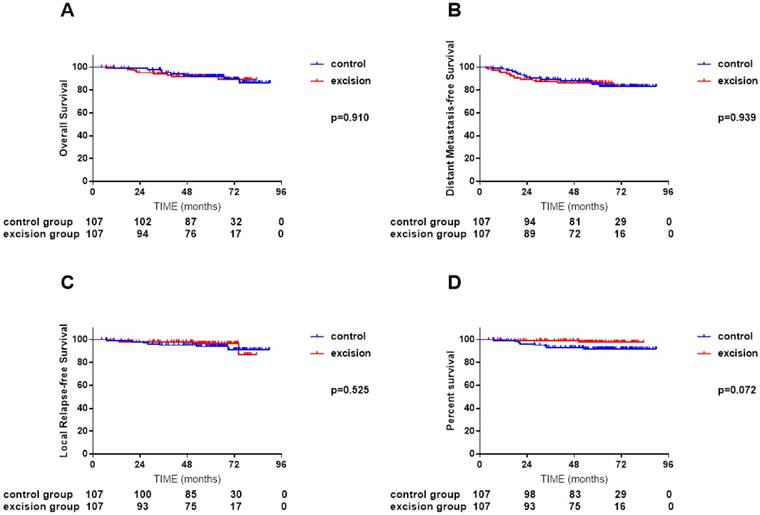 For unknown primary malignancy with neck nodes metastasis, cervical lymph node biopsy is an important diagnostic method. FNAB of the neck was added as a recommended test to diagnose NPC in latest National Comprehensive Cancer Network (NCCN) guidelines [6]. However, misgivings over the promotion of tumor cell dissemination led to a different recommendation in the ESTRO Clinical Practice Guidelines for NPC in 2012 [7]. A population-based study showed that no significant impaired survival was found in neck biopsy of NPC; however, the study failed to discuss the method of biopsy in detail [13]. To date, only one, relatively old article stated that partial excision presented poorer survival than complete excision [9]. However, in the study cohort, the treatment received by the patients varied, which decreased the reliability of the results. Currently, IMRT is the therapeutic benchmark for NPC [16]; thus, a study performed before the advent of IMRT may no longer be relevant.

Therefore, in the present study, we conducted a propensity score-matched assessment of the impact of cervical lymph node biopsy in NPC in the IMRT era.

In our study, biopsy of neck nodes did not result in a higher incidence of death, which supported the NCCN guidelines and Lv's study [13]. In fact, studies in 1981 [8] and 1983 [9] also found no significant survival difference between two group. However, the article by Dickson [8] et al supposed that the trend was unmistakable when 39% of 58 biopsied patients and 31% of 50 non-biopsied patients developed distant metastasis. Although there were concerns about tumor cell dissemination and formation of micro-metastatic foci caused by biopsy [17-19], our study showed that neck biopsy would not increase the risk of nodal recurrence or distant metastasis. One reasonable conjecture was that the “impairment” resulting from cervical lymph node biopsy was curable for NPC. Chemotherapy was supposed to markedly reduced the risk of metastasis and improve radiosensitivity [12], which was recommended for positive lymph node metastasis in the national practice guidelines [7]. Meanwhile, the widespread application of MRI and IMRT remarkably improved the survival, especially locoregional recurrence-free survival, of patients with NPC [11, 20]. In other words, distant metastasis is the main treatment failure pattern and is associated with poorer with overall survival. As cervical node biopsy would not result in impaired DMFS or OS, more aggressive treatment may not necessary.

Interestingly, in the subgroup analysis, lower nodal recurrence in patients who received pretreatment nodal excision biopsy was marginally significant. We noticed that some oncologists treated the area of the biopsied node as “tumor bed” and a higher dose of radiation was usually delivered to neck, leading to a lower nodal recurrence rate in node-biopsy group. However, the highly similar overall survival curve between the excision biopsy and control groups suggested that the higher dose was unnecessary.

Although only FNAB was recommended as a diagnostic test in head and neck cancer, surgical excision biopsy was considered ideal for diagnosis when NPC was misdiagnosed as lymphoma [21]. However, the expense, the potential for treatment delay, and the low compliance because of the surgical approach call for another, less invasive method of tissue sampling. Cai et al found patients who received radiotherapy within 14 days after biopsy had a five-year survival of 61% (42/69), which is better than that of the patients who started their treatment beyond the 15th day (47.5%~58/122)[9]. Imagine-guided core needle biopsy has been proven to provide sufficient information and minimal impairment compared with excision [14], whereas FNAB was accused of being “woefully inadequate” for treatment planning [22]. Fortunately, in contrast to lymphoma, lymph node biopsy is secondary in NPC diagnosis and the nodal architecture plays a minor role. In addition, we found that cervical needle biopsy was not associated with significant survival impairment. Therefore, the recommendation to use FNAB to diagnose NPC is feasible and safe.

As a retrospective study from a single center in an epidemic area, our results may be limited by selection bias. Second, as most of neck biopsies were done by other centers, it was hard to obtain the details of the biopsied nodes, such as their volume [23], extracapsular extension [24], and necrosis [25], which are believed to be crucial factors for treatment induction and prognosis. Third, the lack of details concerning the actual radiation dose distribution might affect the creditability of results. Moreover, the single race and histological type may limit the application of this study.

In the IMRT era, additional cervical lymph node biopsy would not increase the risk of local or distant failure, or death. For the excision-biopsy cohort, lower nodal recurrence did not result in increased survival. Therefore, cervical lymph node biopsy could be added as conventional diagnostic test for NPC and more aggressive chemotherapy or a higher radiation dose to neck for patients who received node excision biopsy may not be necessary.