The value of preoperative transcatheter arterial chemoembolization (TACE) for patients with recurrent hepatocellular carcinoma (rHCC) after liver resection is uncertain. We aimed to determine its effect on postoperative complication and survival. There were 33 patients who received preoperative TACE and repeated liver resection (TACE-LR) and 119 patients who received repeated liver resection (LR) alone for rHCC. Seventy-eight patients (TACE-LR, 28; LR, 50) were identified by propensity score matching (PSM) analysis for comparison of postoperative complication, disease-free survival (DFS) and overall survival (OS). Univariable and multivariable analyses were used to identify predictors for survival. Before matching, the TACE-LR group had more intraoperative blood loss than the LR group (P < 0.05). After matching, the TACE-LR group had more intraoperative blood loss and a longer operation time (Both P < 0.05). In all and matched patients, both groups had similar postoperative complications rate (TACE-LR, 21.2%; LR, 7.6%; P = 0.052 and TACE-LR, 21.4%; LR, 12.0%; P = 0.435), DFS (P = 0.81 and P = 0.41) and OS (P = 0.87 and P = 0.79). Preoperative TACE was not a predictor for DFS and OS in multivariable analyses. Preoperative TACE for resectable rHCC prolongs operating time and increases intraoperative blood loss without improving survival; thus, it should not be recommended as a routine procedure before repeated resection for patients with rHCCs.

Transcatheter arterial chemoembolization (TACE) is a common treatment for unresectable HCC in which tumor ischemic necrosis is induced through arterial injection of chemotherapeutic drugs and embolizing agents. For patients with resectable primary HCC, preoperative TACE has been shown to offer no benefit and even be associated with worse survival, longer operating time and a higher incidence of extrahepatic tumors in patients with incomplete or no tumor necrosis after preoperative TACE[3, 11]. In clinical practice, TACE prior to attempted resection for rHCC is used with the hope that it may improve long-term outcome by reducing the viability of tumor cells or decreasing the size of a previously unresectable recurrence. However, there is no study that assesses the value of preoperative TACE for rHCC [12-16]. We aimed to explore the value of TACE prior to liver resection for patients with rHCC after initial resection for HCC.

Diagnosis and Treatment of HCC

The preoperative diagnosis of primary and recurrent HCC was based on clinical criteria from the AASLD [3]. Histopathological criteria were used to confirm HCC diagnoses after resection. In our center, TACE was performed before repeated liver resection for rHCC in the following situations: (1) Patients with potential intrahepatic metastases (8 cases); (2) to downgrade tumors for curative liver resection (6 cases); (3) insufficient liver function for immediate surgery (10 cases); (4) hoping to improve long-term outcome (9 cases).

TACE was performed by interventional radiologists who had more than eight years of experience in interventional therapy at the start of the study. We performed TACE using the Seldinger technique. Under local anesthesia, a catheter was introduced into the proper hepatic artery through the femoral artery. Hepatic angiography was performed to obtain information on the tumor size, number, location, and arterial supply and confirm the patency of the portal vein. Then the chemotherapeutic agents, including carboplatin 300mg, epirubicin 50mg and mitomycin C 6mg with an appropriate amount of iodized oil according to the tumor size and number, were injected into the arterial branches. The injection was continued until stasis was confirmed in the feeding artery. The effects of TACE were evaluated based on the comparison of CT/MRI scans before and after TACE. Changes in tumor size after TACE were recorded as enlargement, stationary, <50% shrinkage, and ≥50% shrinkage.

The surgeons performing resection had 16-22 years of experience in liver surgery. The surgical plan was developed based on tumor extent and liver function. Preferable anatomical resection was performed. We applied Pringle's maneuver with cycles of clamping and unclamping times of 10 minutes and 5 minutes, respectively, and lowered central venous pressure to 2-4 mmHg during parenchyma dissection to control intraoperative bleeding.

Propensity score matching (PSM) analysis was used to reduce the bias of treatment selection [19]. We performed PSM via logistic regression to estimate a propensity score for each patient. The following covariates entered the model: etiology, primary tumor differentiation, presence or absence of microvascular invasion of primary tumors, recurrent tumor number and interval between initial resection and recurrence. We matched 28 patients in the TACE-LR group with 50 patients in the LR group using the one-to-two nearest neighbor matching algorithm without replacement (caliper = 0.2). For all patients and matched patients, continuous variables between the two treatment groups were compared using Student's t-test or the Mann-Whitney U-test; binary and ordinal categorical variables were compared using the chi-square test and Kruskal-Wallis test, respectively. OS and DFS curves were constructed using the Kaplan-Meier method and compared using the log-rank test. Prognostic factors for OS and DFS were assessed using the Cox proportional hazards model in a stepwise manner (probability for stepwise: Entry 0.05, Removal 0.10). The proportional hazards assumption was verified by the Schoenfeld residuals tests and checked by graphical diagnostics. All statistical analyses were performed using SPSS 20.0 (IBM, Armonk, NY, USA) and PSM for SPSS, version 3.02. For all statistical tests, P < 0.05 was considered statistically significant. All P value calculations were two-sided tests. Key raw data in our study have been uploaded onto the Research Data Deposit public platform (www.researchdata.org.cn) with the approval number as RDDA2018000548.

The Effects of TACE

PSM analysis was performed to reduce the bias of covariates between these two groups (Figure S1). After matching, patients in both groups had similar clinicopathologic features (Table 1). A total of 50 of the 119 patients in the LR group and 28 of the 33 patients in the TACE-LR group were matched for further analyses. The TACE-LR group had significantly more intraoperative blood loss and longer operating time than the LR group (P = 0.018 and P = 0.047, respectively) (Table 2). The type of resection was similar between the two groups (P = 0.607). The overall complication rate was 12.0% in the LR group, which was not significantly different from the 21.4% rate observed in the TACE-LR group (P = 0.435). No treatment-related deaths were observed in either group.

Preoperative Clinical Characteristics of Patients Before and After PSM

Values are presented as the median (IQR) or n (%).

Comparison of Perioperative Characteristics Between Groups Before and After Matching

Univariable and Multivariable Analysis of Predictors for OS

Univariable and Multivariable Analysis of Predictors for DFS

Recurrence of HCC is recognized as an important prognostic factor for patients after curative liver resection for HCC. Therefore, treatment of recurrent HCC is the key to improving survival. Repeat hepatectomy is the most accepted treatment for recurrent HCC [4, 6]. A recent study also found that resection is superior to TACE for recurrent HCC after initial resection [7].

Although TACE was initially established as a palliative treatment for unresectable HCC [20]. In recent years, it has also been performed preoperatively on patients with resectable HCC. The main purposes of preoperative TACE were to improve the detection rate of latent intrahepatic metastatic foci; to increase the resectability rate of HCCs by down-staging tumors that are either initially borderline resectable or unresectable; to provide sufficient time for therapy in cases of damaged liver function; and finally, to improve OS and DFS rates after curative resection [20, 21]. However, for patients with resectable primary HCC, preoperative TACE is proven to be associated with worse survival, longer operating time and higher rates of extrahepatic tumors. Thus, TACE prior to resection for primary HCC offers no benefit and is not recommended by AASLD [3, 22]. However, for patients with resectable recurrent HCC, there is no study to evaluate the value of preoperative TACE. In this study, we compared the effects of TACE followed by liver resection with those of liver resection alone in the treatment of resectable recurrent HCC by using PSM analysis. 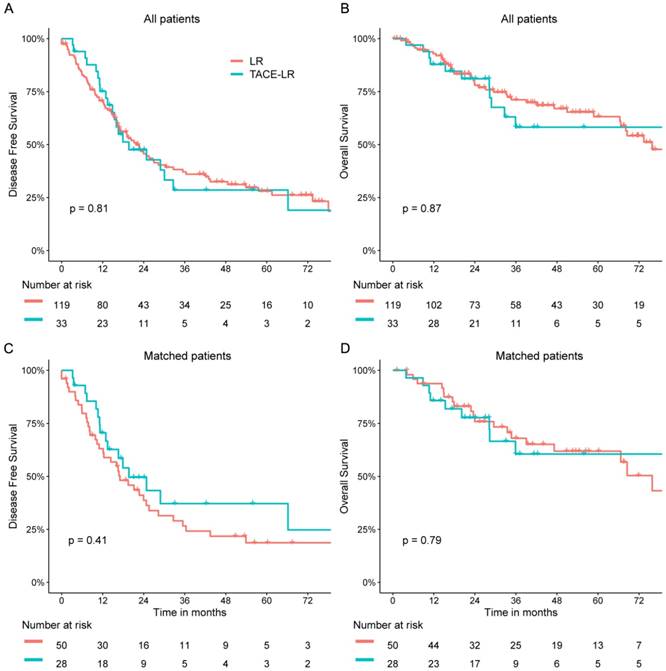 In our study, we found longer operating time and more intraoperative blood loss in the TACE-LR group than the LR group. This result is similar to previous studies on the effect of TACE prior to liver resection for patients with primary HCC. These studies have shown that preoperative TACE increases difficulty in hepatic parenchyma dissection due to inflammatory pedicles, perihepatic adhesions, or arterial thrombosis caused by TACE, which result in longer operating time and more intraoperative bleeding [23, 24]. The difficulty of repeated live resection for recurrent HCC is significantly increased due to postoperative inflammatory reaction and perihepatic adhesions after initial resection for primary HCC. Additional TACE prior to repeated resection will aggravate these issues. As a result, preoperative TACE for recurrent HCC should be performed prudently due to increased surgical difficulty and risk. Moreover, postoperative complications should also be considered before making the decision regarding recurrence treatment. We found no significant difference in the postoperative complications after repeated liver resection for recurrent HCC between two groups. This finding is in line with previous research on the postoperative results in patients with primary HCC [16].

Other than short-term outcomes, the DFS and OS should be considered when making a treatment choice. In our study, no significant differences were observed between these two groups in DFS and OS rates. In multivariable analyses, preoperative TACE was not a prognostic factor for DFS and OS. Prognostic factors were recurrent tumor number, primary tumor differentiation, recurrent tumor size, and the interval between initial resection and recurrence, which suggests that the role of primary and recurrent tumor characteristics are more important than treatment modality. Previous studies presented similar results in patients with resectable primary HCC, showing that preoperative TACE did not improve the DFS or OS [22, 25]. They suggested that preoperative TACE should only be performed in patients with borderline resectability to make it possible to perform curative resection.

Several studies on primary HCC showed that preoperative TACE reduced tumor recurrence and improved survival rate in patients with large tumors [21, 26], advanced HCC [27], and severe liver dysfunction [28]. In our study, compared with patients in the LR group, patients in the TACE-LR group were associated with a larger proportion of multiple recurrent HCC and a shorter interval between initial resection and recurrence. This finding suggests that healthcare providers tend to perform TACE prior to repeated resection on patients with aggressive recurrence such as early, large and multiple recurrent tumors. To better compare the long-term outcome of preoperative TACE, we used PSM to adjust potential confounding factors and to reduce the bias of treatment selection between the two groups. Still, we found that preoperative TACE does not benefit patients with recurrent HCC after repeated live resection.

To our knowledge, there is a lack of data on the role of TACE prior to repeated resection for recurrent HCC after liver resection. Therefore, the results of our study, which were obtained in matched patients with similar clinical characteristics between the TACE-LR and LR groups, can provide valuable information in guiding the management of resectable recurrent HCC after liver resection.

Our study has several limitations. First, this is a single-center retrospective study with a relatively small number of patients. Thus, multi-center studies will be necessary to validate our conclusions. In addition, more than 90% of the included HCCs were caused by HBV infection. Therefore, it may be difficult to generalize our results to those of HCCs caused by HCV infection or alcohol use.

In conclusion, preoperative TACE for resectable recurrent HCC prolongs operating time and increases intraoperative blood loss without improving the DFS and OS; thus, it should not be recommended as a routine procedure before repeated resection for patients with recurrent HCC.

The key raw data have been deposited into the Research Data Deposit (www.researchdata.org.cn), with the approval number of RDDA2018000548.