Methods and Materials: We retrospectively investigated treatment outcomes and adverse events in 121 patients with advanced esophageal cancer who underwent concurrent chemoradiotherapy with CF-RT (n = 83) or DCF-RT (n = 38). In the CF-RT group, patients were administered cisplatin (70 mg/m2) and 5-fluorouracil (700 mg/m2) for 5 days; in the DCF-RT group, patients were administered docetaxel (50 mg/m2), cisplatin (50 mg/m2), and 5-fluorouracil (500 mg/m2) for 5 days. The radiotherapy dose was 1.8-2 Gy per session, up to a total of 50-60 Gy.

Conclusions: Rates of OS and CR were improved after treatment with DCF-RT compared with CF-RT. Although DCF-RT-treated patients had higher rates of leukopenia, treatment safety was ensured through proper management of myelotoxicity. DCF-RT is a promising treatment regimen for advanced esophageal cancer.

Esophageal cancer is one of the most difficult cancers to cure and has a poor prognosis. Despite technological advances in treatment modalities, treatment outcomes for locally advanced esophageal cancer are poor1-12, because most patients present with advanced stage disease, with lymph node metastasis already evident at the time of diagnosis.13

Concurrent chemoradiotherapy (CRT) is currently the first-line treatment for inoperable or unresectable esophageal cancer.14 The standard regimen for concurrent CRT combines cisplatin plus 5-fluorouracil (5-FU) (CF) with radiation to achieve good clinical outcomes and a radiosensitizing effect.2,3 However, treatment outcomes of CF are slightly inferior to those of surgery, hovering around 26%-27% for clinical T1-3, N0-1 cases1,15 and 31% for clinical T1-4, N0-1 cases.2

Recent studies have reported favorable outcomes in patients treated with CF plus docetaxel (DCF) instead of CF alone as preoperative chemotherapy or therapy for postoperative recurrence.16-23

However, very few studies have used DCF and radiotherapy concurrently.24-26 In contrast, DCF is frequently combined with radiotherapy as concurrent CRT (DCF-RT) to treat patients with advanced head and neck carcinoma, achieving high response rates.27 In this study, we therefore compared treatment outcomes of DCF-RT and conventional concurrent CRT with CF (CF-RT). To verify the superiority of DCF-RT over CF-RT, we investigated the effectiveness of our treatment strategy for esophageal cancer and the incidence of acute and late adverse events.

This study was approved by the institutional review board of Shimane University Hospital and Dokkyo Medical University Hospital, and conducted in accordance with the Declaration of Helsinki. Before consenting in writing to participate in the study, all patients were informed in detail of the study purpose and procedures for chemotherapy and radiotherapy, and were told that they were free to reject treatment regimens.

Patient characteristics are shown in Table 1. Median age was 68 (range 45-86) years. European Clinical Oncology Group performance status (PS) was 0-1 in 111 patients and 2-4 in 10 patients. Histological type was squamous cell carcinoma (SCC) in 120 patients and adenocarcinoma in 1. For chemotherapy, cisplatin and 5-FU were administered to 81 patients (CF-RT group) and docetaxel, cisplatin, and 5-FU to 38 patients (DCF-RT group).

Treatment was performed as curative CRT in 96 patients (69 CF-RT, 27 DCF-RT) with no prior treatment history, as adjuvant CRT in 5 patients (2 CF-RT, 3 DCF-RT) with residual tumor after radical surgery for esophageal cancer, or as curative CRT for salvage in 18 patients (10 CF-RT, 8 DCF-RT) with isolated mediastinal lymph node metastasis (recurrence) after radial surgery for esophageal cancer. After excluding cases of salvage CRT for recurrent mediastinal lymph node metastasis, 103 patients were staged according to UICC 2009. Twelve patients were categorized as stage II (9 CF-RT, 3 DCF-RT); 65 as stage III (47 CF-RT, 18 DCF-RT); and 26 as stage IV (17 CF-RT, 9 DCF-RT).

The Mann-Whitney U-test and the chi-squared test were used to determine differences between the patient groups in continuous numeric and categorical variables, respectively. Rates of overall survival (OS), progression-free survival (PFS), and local control (LC) were estimated by the Kaplan-Meier method and compared using the log-rank test, with a P-value of less than 0.05 considered statically significant.

Overall survival (OS) curves for the CF-RT (cisplatin, 5-fluorouracil and radiotherapy) and DCF-RT (docetaxel, cisplatin, 5-fluorouracil and radiotherapy) groups. OS rates at 2 and 3 years are 45.0% and 37.5%, respectively, in the CF-RT group and 62.9% and 56.7%, respectively, in the DCF-RT group, with a significant intergroup difference (p = 0.032). 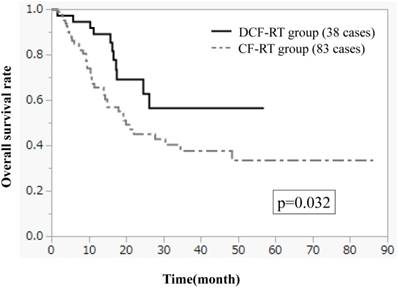 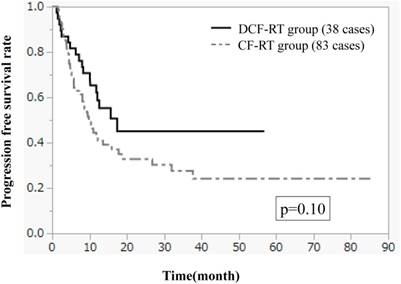 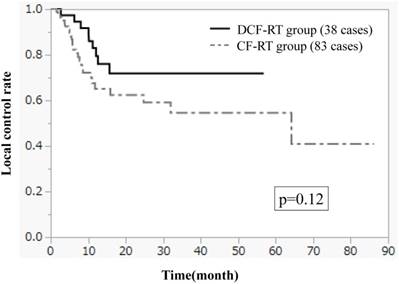 For univariate analysis, patients were divided into subgroups based on patient characteristics as follows: age (< 70 or ≥ 70 years), PS (0-1 or 2-4), treatment background (new or residual/recurrent tumor), and radiation dose (50 or 60 Gy). No significant intergroup difference was observed between the two subgroups for any of these factors (Table 3).

Mean CR rate, the primary endpoint of this study, was 37.8% in the CF-RT group compared with 52.6% in the DCF-RT group, although the difference was not statistically significant. These rates are very similar to those found in previous studies; Higuchi et al. treated patients with DCF-RT and achieved a CR rate of 52.4%26), while Ohtsu et al. attained a CR rate of 33% using CF-RT.30 In our study, OS rates were significantly improved and PFS and LC rates were favorable in the DCF-RT group. Taken together, our findings suggest that the anticancer effect of CRT is more potent with DCF-RT than with CF-RT.

In a study of preoperative CRT with DCF for locally advanced esophageal cancer, Zanoni et al. observed a pathological CR rate of 43% in patients with SCC, and 5-year OS and disease-related survival rates were 43% and 49%, respectively.24 This led the authors to conclude that the addition of a taxane to CF-CRT was beneficial. Pasini et al. also observed pathological CR in 35 (47%) of 74 patients who underwent surgery immediately after DCF therapy.16 Docetaxel exerts anticancer effects by suppressing the depolymerization of microtubules and blocking cell division. The agent also increases the radiosensitization effect by arresting cells in G2/M, a cell cycle phase that is highly vulnerable to radiation, thereby increasing the radiosensitization effect.31 A previous study also reported that cisplatin and taxane-containing regimens suppress the expression of genes associated with dihydropyrimidine dehydrogenase, an enzyme that degrades 5-FU.32 The strong anticancer effects of DCF-RT may be attributable to these molecular mechanisms.

In the present study, OS and PFS rates did not differ significantly between patients treated with 50 Gy versus 60 Gy, but LC was slightly higher in the latter. Suh et al. compared treatment outcomes between patients treated with 50 Gy versus 60 Gy for advanced esophageal cancer (mostly SCC) and found that the latter group had significantly better locoregional control (2-year locoregional control rate, 69% versus 32%, p < 0.01) and prolonged PFS (2-year PFS rate, 47% versus 20%, p = 0.01).33 Median OS was 18 months in the 50-Gy group and 28 months in the 60-Gy group, with no significant intergroup difference (p = 0.26). However, Suh et al. reported that multivariate analysis revealed that 60 Gy or higher radiotherapy was a significant prognostic factor for improved locoregional control, PFS, and OS, suggesting that it is more beneficial to use 60 Gy.33

Hematological toxicities are the most frequent and important adverse events in therapy with DCF.

In general, the number of neutrophils decreases rapidly in patients treated with DCF-RT.34 In the present study, we also observed cases in which patients who originally had no leukopenia or neutropenia developed Grade 4 leukopenia or neutropenia in a matter of 4-5 days. We performed complete blood counts 3 times a week during and after chemotherapy and administered G-CSF as soon as cell counts began to decrease. Despite these efforts, some patients developed Grade 4 leukopenia/neutropenia, suggesting that it may be necessary to consider using long-acting G-CSF agents such as pegfilgrastim in the future.

Late adverse events, which are important factors in CRT with esophageal cancer, included radiation pneumonitis, pleural effusion, cardiac dysfunction, pericardial effusion, esophageal stricture, and perforation in the present study. Our findings did not differ substantially from those of previous studies using CF-RT.35,36 Radiotherapy has been reported to significantly increase cardiac death rates, suggesting that long-term follow-up may be necessary.37

This study has certain limitations. First, the effects of selection bias are not negligible, as this is a retrospective study. As shown in Table 1, there were no significant differences in any of the characteristics of patients between the two groups. Nevertheless, we plan to continue accumulating more cases so that we can perform matched-pair comparison in the future. Also, favorable outcomes of this study may prompt a prospective study using a new modified protocol. We are in the process of designing a prospective study according to the present protocol, for which it will be particularly important that patients are well matched with regard to clinical stages and radiation fields. Also, the proportion of elderly patients was slightly higher in the CF-RT group than in the DCF-RT group because the expected toxicity of DCF-RT was slightly greater than that of CF-RT. Although the median ages of the two groups were roughly the same and did not differ significantly (Table 1), a possible selection bias remained. Second, the DCF-RT group had fewer patients than the CF-RT group. To improve statistical precision, the number of patients undergoing DCF-RT will be increased in our future prospective study.

In conclusion, DCF-RT has an extremely potent anticancer effect and extends overall patient survival compared with CF-RT albeit with some limitations. It may be necessary to prevent or manage leukopenia and neutropenia—for example, with G-CSF—but it is very likely that DCF-RT will be a promising treatment regimen for esophageal cancer in the future.