Purpose: Programmed cell death 1 ligand-1 (PD-L1) and PD-1 as prognostic biomarkers have spurred considerable interest in several types of malignant tumors. In the present meta-analysis, we aimed to elucidate the clinicopathological and prognostic values of PD-L1/PD-1 in osteosarcoma.

Methods: We systematically searched PubMed, Web of Science, EMBASE, Scopus, CBM and the Cochrane Library databases up to March 3, 2018. Eligible studies assessing the relationship between PD-L1 or PD-1 expression and clinicopathological and prognostic outcomes in osteosarcoma were incorporated. Pooled relative risks (RRs) and 95% confidence intervals (CIs) were used to estimate the outcomes.

Conclusion: Our meta-analysis indicates that PD-L1/PD-1 may serve as an important biomarker for adverse clinicopathologic features and poor prognosis in patients with osteosarcoma.

Osteosarcoma is one of the most common primary malignant bone tumors, especially in children and young adults. Although surgery in combination with chemotherapy has increased the disease-free survival rate to over 60% [1], limited effects have been shown to protect patients against the recurrent or metastatic osteosarcoma [2]. Therefore, more effective therapeutic strategies are warranted for the treatment of osteosarcoma.

Programmed death ligand-1 (PD-L1) is expressed by most cell types including cancer cells [3-5]. It is speculated that PD-L1 plays a pivotal role in delivering an inhibitory signal to programmed cell death 1 (PD-1) expressing T cells, resulting in immune system impairment [6]. Recent evidence strongly suggests that the activation of the PD-L1/PD-1 pathway allows tumors to adopt an immune evasion mechanism [7, 8]. Additionally, PD-L1 expression is reported to be significantly in correlation with poor prognosis in cancer [9, 10]. Blocking the PD-L1/PD-1 pathway induces significant objective responses and prolonged stabilization of the disease in patients with cancer [11]. The immunomodulatory therapies targeting the PD-L1/PD-1 immune-checkpoint pathway promote remarkable anti-tumor immunity and have shown considerable success in a subset of solid tumors, including melanoma, lung cancer, and head and neck carcinomas [12].

We searched PubMed, Web of Science, EMBASE, Scopus, CBM and the Cochrane Library databases up to March 3, 2018. A comprehensive search strategy was developed based on the following terms: (1) PD-L1, programmed death ligand-1, B7-H1, programmed cell death 1, PD-1 and (2) osteosarcoma, osteogenic sarcoma. We additionally hand-searched the references of relevant articles and contacted investigators of certain studies when necessary.

Studies were taken into account when they satisfied the following inclusion criteria: (a) patients had a pathological diagnosis of osteosarcoma; (b) the correlation between PD-L1/PD-1, clinicopathological features, and prognosis was discussed. Exclusion criteria were as follows: (a) literatures not pertinent to PD-L1/PD-1 or osteosarcoma; (b) similar studies from the same author as well as multiple duplicate data in the different works; or (c) animal experiments, case reports, correspondences, reviews, expert opinions, letters, talks, or effect estimates from conference abstracts when a full-published study was not available.

Two investigators (XH, WYZ) evaluated the eligibility of all retrieved studies and extracted the relevant data independently. Extracted databases were then cross-checked between the two authors to rule out any discrepancy. Disagreement was resolved by consulting with a third investigator (ZWS). The following data of each collected studies were extracted independently: author, year of publication, patient number, country, detection method, cut-off values for the positive or high expression of PD-L1/PD-1, and duration of follow-up. The Cochrane Collaboration risk of bias tool was used to assess risk of bias. Our investigation process was in accordance with the Preferred Reporting Items for Systematic Reviews and Meta-Analyses (PRISMA) statement.

The statistical analysis was performed using the Review Manager (RevMan) software version 5.3 and STATA 14. Estimates were summarized as relative risks (RRs) with 95 % confidence interval (CI) for each study. The between-study heterogeneity was evaluated by using the chi-square test and the I2 statistic. An I2 value of >50% of the I2 statistic was considered to indicate significant heterogeneity [13]. When a significant heterogeneity existed across the included studies, a random effects model was used for the analysis. Otherwise, the fixed effects model was used. Subgroup analyses were performed to detect the source of heterogeneity. We further conducted sensitivity analyses to substantiate the stability of results and detect the potential source of heterogeneity. Publication bias was evaluated qualitatively by inspecting funnel plots and quantitatively through the Begg's and Egger's test. A two-tailed P-value<0.05 implies a statistically significant publication bias.

The study selection process is illustrated in Figure 1. A total of 274 potential articles were identified from the databases search. Among these articles, 230 were excluded after abstract review, leaving 44 articles for the full-text review. In the review, 36 studies were excluded for the reasons as follows: eighteen were eliminated because they were irrelevant to PD-L1/PD-1 or osteosarcoma, four studies were of no relevant outcomes reported, three studies were of reviews, seven studies involved non-human experiments, and four studies were excluded because of insufficient data for analysis. Finally, eight studies with a total of 413 patients that met the inclusion criteria were included in this meta-analysis.

Baseline characteristics of the included studies are presented in Table 1. The publication years of the eligible studies ranged from 2014 to 2017, and the number of patients in each study ranged from 13 to 107. Additionally, the PD-L1/PD-1 expression levels were measured in tumor tissues in all eight studies by immunochemical staining (IHC). As indicated in Table 1, each article had a specific cut-off value, which consequently influenced the positive rates of PD-L1/PD-1 overexpression. Moreover, the mean duration of follow-up after surgery ranged from 25 to 96 months.

Flowchart of the study selection process. 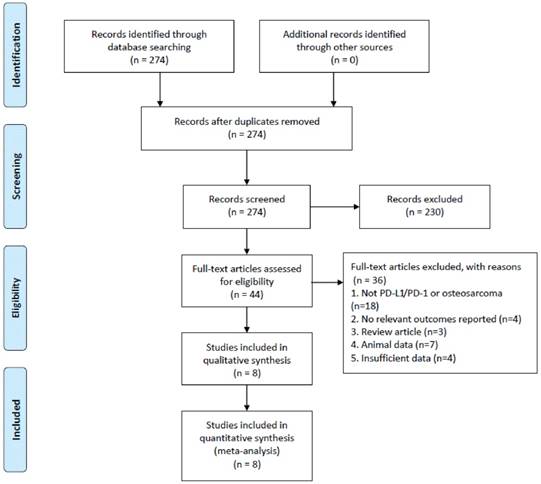 In the present study, we assessed the relationship between positive/higher PD-L1 expression and clinicopathological features of osteosarcoma patients (Table 2). Metastasis of osteosarcoma was reported in seven studies (Figure 2). Due to the absence of heterogeneity (I² = 0.0%, p = 0.801), the fixed-effect model was adopted, which indicated a pooled RR of 1.54 (95% CI: 1.12-2.11, p = 0.008). Therefore, positive/higher PD-L1 expression was significantly associated with increased metastasis in patients with osteosarcoma. However, no significant relationship was observed between PD-L1 overexpression and other clinical characteristics such as gender, tumor size, differentiation of high grade, high tumor stage and response to chemotherapy in osteosarcoma due to insufficient data.

Main characteristics of the studies included in this meta-analysis.

b Total score was calculated by PD-L1 staining intensity which was graded into four groups: no staining (0), weak staining (1+), moderate staining (2+), and intense staining (3+).

c Absolute PD-L1 expression was normalized to that of housekeeping gene β-actin and categorized by log-transcript detection: low=1-log, intermediate=2-log, and high=3- and 4-log.

Relationship between PD-L1/PD-1 expression and the clinicopathological features.

Forest plots for lymph node metastasis of PD-L1/PD-1 in osteosarcoma. 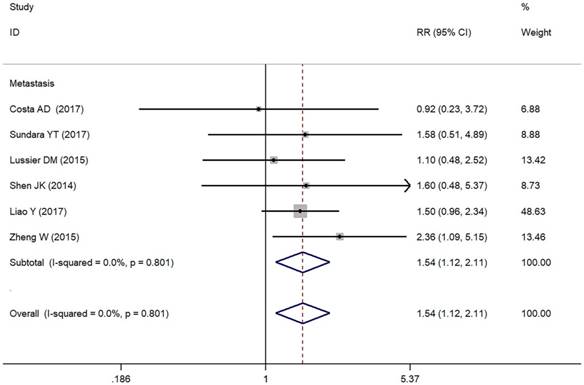 Forest plots for total mortality risk of PD-L1/PD-1 in osteosarcoma. 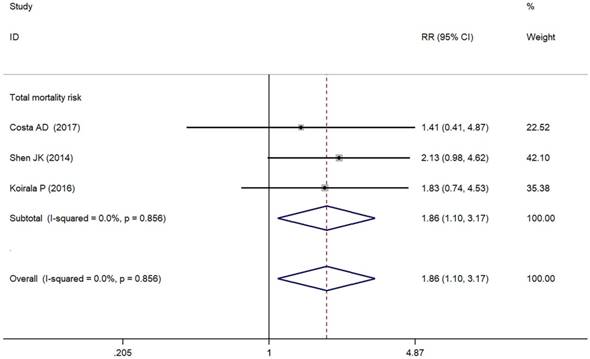 Forest plots for overall survival of PD-L1/PD-1 in osteosarcoma. 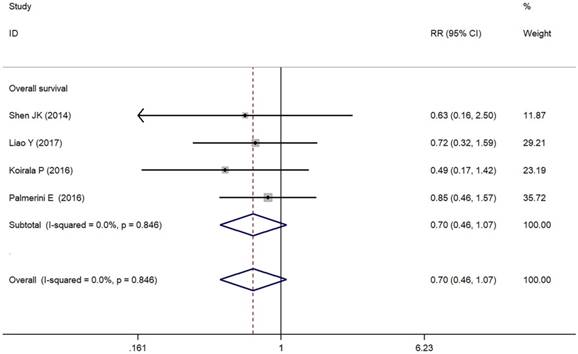 It is well-known that PD-1 and its ligand PD-L1 are main mechanisms for tumor immune tolerance and escaping immune surveillance [22]. PD-1 is a cell-surface receptor expressed on subsets of T and B lymphocytes as well as on other immune cells. Furthermore, abundant evidences have indicated that PD-1 is a co-inhibitory receptor that negatively regulates T-cell function [23]. Meanwhile, PD-L1, as a transmembrane protein, is expressed on tumor-infiltrating lymphocytes (TILs), antigen present cells (APCs) and tumor cells of cancer including breast, lung, prostate and so on. Based on the study of Shen et al. [17], PD-L1 mRNA and protein expression were also detected in human osteosarcoma samples and in cell lines.

In our study, metastasis of osteosarcoma was reported in seven eligible studies. Previous studies have detected overwhelming evidence about the role of PD-L1 in metastatic osteosarcoma. Utilizing quantitative real-time PCR (qRT-PCR), PD-L1 mRNA expression had positive correlation with TILs, which is regarded as a marker of metastasis [17]. Subsequently, with the method of immunofluorescence (IF), PD-L1 was reported to be specially expressed in metastatic tissues rather than in primary specimens [16]. In accordance with the previous findings, our study strengthened the observation that PD-L1 expression was remarkably associated with metastasis in osteosarcoma. Moreover, by CRISPR/Cas9 system, PD-L1 may play a role in regulating osteosarcoma cell growth and drug resistance to doxorubicin and paclitaxel [18]. However, there was no significant relationship between PD-L1 expression and other clinical characteristics of osteosarcoma. The drug resistance and tumorigenicity of osteosarcoma were supposed to be partly attributed to PD-L1 overexpression, which thereby might be a potential target in clinical treatment [18].

Our study also demonstrated that PD-L1/PD-1 may be a significant indicator of poor prognosis for patients with osteosarcoma. The PD-L1/PD-1 complex transmitted an inhibitory signal, which reduced the proliferation of CD8+ T cells at the lymph nodes and suppressed the immune response [24]. It was speculated that exhausted CD8+ T cells gradually lost the ability to proliferate and expressed cytokines like interleukin-2 (IL-2), tumor necrosis factor-a (TNF-a), and interferon-gamma (IFN-γ) [25]. Moreover, an increased PD-1 expression was also observed on peripheral CD4+ T cells, while limited the extent of CD4+ T cell accumulation in response to an immunogenic stimulus [26]. And it strengthened the idea that PD-L1/PD-1 axis may play a role in osteosarcoma progression [20]. In our study, positive/higher PD-L1/PD-1 expression was associated with increased total mortality risk and decreased overall survival in osteosarcoma patients. The major mechanisms including immune tolerance and tumor progression may elucidate the poor prognosis of osteosarcoma with high PD-L1/PD-1 expression.

Due to its expression in both tumor cells and various immune cells, the PD-L1/PD-1 axis may be a promising target for immunotherapy of osteosarcoma [19]. According to the mechanisms mentioned above, reactivation of T cells by PD-L1/PD-1 blockade might increase the antitumor immune response [27]. Preclinical data demonstrated the benefit of combination therapy targeting both PD-L1 and CTLA-4 in a mouse model of metastatic osteosarcoma [28]. Furthermore, the efficacy of pembrolizumab (anti-PD-1 antibody) is being investigated for advanced sarcomas including osteosarcomas in the phase II SARC028 study (NCT02301039). In response to treatment with anti-PD-L1 antibody, tumor cells downregulated PD-L1 whereas upregulated CD80 and CD86. Meanwhile, improved CTLs function was also observed in vivo. Accordingly, PD-L1 monoclonal antibody was supposed to enhance T-cell-mediated rejection of metastatic osteosarcoma and potentially improve prognosis of patients [16]. However, due to the uncertain clinical efficacy and expensive cost of PD-L1 antibodies, additional therapeutic strategies targeting PD-L1 is warranted to treat osteosarcoma. Recent studies showed that PD-L1 sgRNA-guided CRISPR/Cas9 was able to specifically knockout PD-L1 expression [18]. The establishment of a constitutive PD-L1 knockout cell line provides unique insights into the application of CRISPR/Cas9 technology in osteosarcoma treatment.

Despite the promising data, some limitations still should be acknowledged. Firstly, the detecting and evaluating method of PD-L1/PD-1 expression in the eligible studies was not well defined. Differences in primary antibodies with varying dilutions, staining protocols, evaluation standards, and cutoff values for high/positive expression may contribute to heterogeneity. Secondly, the number of subjects in the included studies is relatively small, which might result in a lack of statistical power and prevent a meaningful analysis of the results. With the updating of gene chip and microarray platform technology and an explosion of PD-1/PD-L1 axis research in osteosarcoma, a significant extension of our finding and re-analysis, which will include more patients, could be accomplished in near future. Finally, when not reported in original articles, RRs were extrapolated from the survival curves or calculated from the provided data according to the method of Parmar et al. [29], which could introduce potential source of bias.

This work is supported by the National Key Research and Development Program of China (2016YFC1100100) and the Major Research Plan of National Natural Science Foundation of China (No. 91649204).

The views expressed in the submitted article are our own and not an official position of the institution or funder.