Background: Prognostic nutritional index (PNI) has been studied in various types of cancer which is significantly correlated with prognosis. The study aims to investigate the predictive role of PNI in patients with metastatic urothelial carcinoma (mUC) treated with systemic chemotherapy.

Conclusions: Our study showed PNI is an independent prognostic factor in patients with mUC. Our work is clinically useful for anticipation of outcomes, risks stratification in clinical studies as well as patients counseling.

Urothelial carcinoma (UC) is the leading cancer of genitourinary tract.[1] Although great advances in anti-cancer treatment in recent years had achieved, the prognosis of metastatic urothelial carcinoma (mUC) remains poor and unsatisfied.[2] Cisplatin-based chemotherapy is still the standard treatment for mUC.[3] In general, the median overall survival (OS) on cisplatin combination chemotherapy is 14 months. Based on previous post-hoc analysis of clinical trials, some prognostic factors were identified to predict outcomes. For example, age,[4] performance status,[5] presence of liver metastasis,[6] baseline renal function,[7] number of metastatic site,[8] histopathologic variant[9] and neutrophil-to-lymphocyte ratio (NLR) were significantly associated with overall survival. Therefore, it is clinically valuable to explore more accurate and representative risk factors to improve patient's survival and provide information when consulting.

For decades, the nutritional and inflammatory status has been demonstrated to be associated with survival in patients with cancer.[10-13] Notably, the prognostic nutritional index (PNI) is one of the most reliably predictive models of cancer patients by calculating serum albumin level and total lymphocyte counts. PNI was firstly proposed by Onodera et al. in 1984 to assess the perioperative immunonutritional status and surgical risks in patients underwent gastrointestinal surgery.[14] However, increasing numbers of studies demonstrated that PNI has been applied as a prognostic factor in patients with various metastatic malignancies.[15-18] With regard to urothelial carcinoma, the prognostic role of PNI is not fully evaluated. Therefore, this retrospective study aims to investigate the correlation between clinicopathologic factors and PNI, and to verify the survival impact of PNI on patients with mUC.

The study was approved by the Chang Gung Medical Foundation Institutional Review Board and the informed consent requirement was also waived because it was a retrospective study. All methods used in this study were performed in accordance with the relevant guidelines and regulations of the local ethical committee. We retrospectively analyzed 383 consecutive patients with metastatic UC from January 1997 to December 2015 in Kaohsiung Chang Gung Memorial Hospital, Taiwan. Database variables were recorded from medical charts of patients, which included sex, age, Eastern Cooperative Oncology Group Performance Status (ECOG PS), the site of primary tumor, histopathologic variant, pre-chemotherapy laboratory data, the number and distribution of visceral metastasis, and the first-line chemotherapy regimen. Patients treated with neoadjuvant chemotherapy (n = 9), adjuvant chemotherapy (n = 48), concurrent chemoradiotherapy (n = 3), and those who lack of pre-chemotherapy lymphocyte count and serum albumin levels for analysis (n = 182) were excluded (Figure 1). All enrolled patients received systemic chemotherapy, and the choice of chemotherapy regimen was at the discretion of the physician. Standard radiological examinations, including computed tomography (CT) of abdomen and chest were used for both baseline tumor evaluation and the subsequent assessment of treatment response. The primary outcome of the study was OS, which was calculated from the date of metastatic disease confirmed to the date of death. Patients without disease progression or death were censored at the date of their last follow-up for survival analysis. 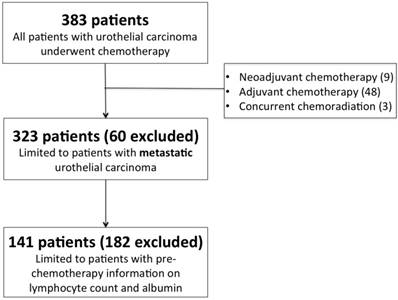 We obtained pre-chemotherapy blood parameters for all eligible patients within 1 week prior to first cycle of chemotherapy. Laboratory tests, including complete blood cell count (CBC) with differentials, lymphocyte count, and serum albumin were performed in local institute. The PNI was calculated according to the following formula: 10 × serum albumin value (g/dL) + 0.005 × lymphocyte count (per mm3).14

We performed all statistical analyses by using SPSS 21.0 software (SPSS Inc., Chicago, IL, USA), and plotted survival figures using GraphPad Prism version 6.04 (GraphPad Software, La Jolla California, USA). The differences of categorical variables between two groups were compared by the Pearson chi-squared (χ2) test or Fisher exact test. We used the receiver operating characteristic (ROC) curve analysis to obtain the optimal cut-off value of PNI for predictive overall survival. The estimated OS was calculated using the Kaplan-Meier method, and the statistical significance was compared using the log rank test. The independent prognostic factors for survival were identified in univariate and multivariate analyses using the Cox proportional hazards model. The hazard ratio (HR) with 95% confidence interval (CI) and P value were calculated to quantify the strength of the association between the prognostic parameters and survival. All tests were two-sided, and P < .05 was considered statistically significant. 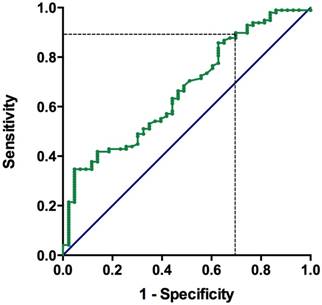 Association of PNI and overall survival 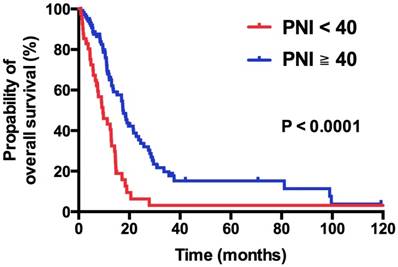 To the best of our knowledge, this is the first study to evaluate the relationship between PNI and OS in patients with mUC. Patients with a low PNI were highly associated with visceral metastasis, leukocytosis and anemia. Furthermore, we found a low PNI value is an independent prognostic factor for OS in mUC patients treated with systemic chemotherapy. Thus, PNI is a clinically good tool for outcomes prediction and risk stratification in clinical studies, as well as patient counseling.

Recent evidence suggests that the nutritional and inflammatory status play an important role in the development and progression of cancer.[19] Herein, several prognostic markers had been developed for outcomes anticipation. The main models includes PNI,[15-18] NLR, [20, 21] platelet-to-lymphocyte ratio (PLR),[22] modified Glasgow prognostic scores (mGPS),[23] prognostic index (PI)[24] and Patient-Generated Subjective Global Assessment (PG-SGA).[25] PNI is calculated by serum albumin level and lymphocyte count, which reflects more comprehensively about nutritional and inflammatory status than other predictive models. For decades, previous studies have determined the survival impact of PNI in patients with various kinds of cancer. Geng et al. conducted a retrospective study of 321 patients with advanced pancreatic cancer and identified that a low PNI correlated significantly with a shorter OS and a higher level of TNF-α.[15] Ikeya et al. collected 80 patients with metastatic colorectal cancer treated with systemic chemotherapy and summarized that maintenance of PNI during pre- and post- chemotherapy exhibited a better prognosis.[16] Du et al. reviewed 694 patients with non-disseminated nasopharyngeal cancer and reported that pre-therapy PNI and weight loss have significant predictive values for distant metastasis and mortality.[17] Sheng et al. analyzed 144 non-small cell lung cancer treated with targeted therapy and suggested a low PNI was correlated with worse outcomes.[18] Our study confirmed the independent prognostic role of PNI in mUC patients, and the results were highly consistent with previously published.

The pathophysiology of nutritional and inflammatory response affecting survival is complicated. It is well known that malnutrition usually causes humeral and cellular immune dysfunction, inflammatory response alterations, and delay of the wound healing process.[26] Sonpavde et al. recently proved that albumin, which reflects the nutritional status, was externally validated as a prognostic factor for overall survival in patients with advanced urothelial carcinoma receiving salvage systemic chemotherapy.[27] Furthermore, several studies also confirmed the associations between clinical outcomes systemic inflammation in patients with various cancer types. A recent comprehensive review proposed that cancer-related inflammation is the seventh hallmark of cancer.[28] Inflammation may induce cancer microenvironment change and increase vascular permeability that are in favor of cancer progression.[29] One of these inflammatory signals is the extracellular matrix component versican, which leads to macrophage activation and production of the metastasis-promoting cytokine TNF-α.[30] Meanwhile, a low lymphocyte count is associated with impaired host cell-mediated immunity since lymphocytes have the pivotal role in cytotoxic cell death and cytokine production that inhibits proliferation and metastatic activity of tumor cells.[31] Taken together, both nutritional and systemic inflammatory response are crucial in cancer development and metastasis, and also essential in estimating patient's prognosis. Further specific targeting therapy on cancer-associated inflammatory process deems to be a brand new milestone of cancer treatment.

The optimal value of PNI to predict prognosis in patients with cancer remains undetermined. Preceding literatures have reported various cutoff values in their studies. Migita et al analyzed 548 patients with gastric cancer who underwent gastrectomy and set PNI at 48 because the sensitivity and specificity for the 5-year OS were 82.3% and 57.9 %, respectively.[32] Jiang et al also summarized 386 elderly patients with gastric cancer and set their cut-off value at 46 with close correlation between PNI and age.[26] Sun et al conducted a meta-analysis to determine the predictive significance of PNI in cancer and found the cutoff value of PNI was usually set at 45, because a PNI < 45 is defined as moderate to severe malnutrition.[33] However, the cut-off value of PNI in this present study was determined to be at 40 according to ROC curve analysis. When PNI was chosen at 40, the sensitivity and specificity were 88.4% and 37.8%, respectively. Moreover, we also investigate the differences in the clinicopathologic factors and survival between PNI-high and PNI-low groups in patients with mUC. Based on our study, patients in PNI-low group had more visceral metastasis, leukocytosis, anemia and high NLR. These were all known as poor prognostic factors for mUC, resulting in worse outcomes of patients in PNI-low group. Also, the multivariable analysis confirmed the predictive role of PNI in patients with mUC. After adjusting with possible confounding factors, PNI is an independently significant viable that affecting the survival of patients with mUC.

Nonetheless, there are several potential limitations in our study. First, this is a retrospective analysis in a single institution with a relatively small sample size, which may limit the power of our study. Second, PNI was calculated by CRP and lymphocyte counts. It is easily interfered by external environment, such as infection, stress and local inflammation except tumors. Meanwhile, the timing of PNI assessment was not consistent. Given that our study was conducted by chart review, we are unable to realize the actual condition of each patient. This might be a major bias of our study. Third, the characteristics of patients were uncontrolled and heterogeneous between PNI-high and PNI-low groups. These imbalanced baselines have some influences on the OS of our patients. Therefore, a prospective, multi-institutional, well-controlled study is warranted to validate our results.

In conclusion, this study disclosed that PNI is an independent prognostic factor for patients with mUC treated with chemotherapy. Based on our result, routine assessment of PNI is suggested and crucial. Our work is clinically useful for anticipation of outcomes, risks stratification in clinical studies as well as patients counseling.

We thank the multidisciplinary team of genitourology cancer at our institute for their gracious assistance and cooperation.