Lung cancer is the leading cause of cancer-related mortality worldwide. The present study focused on the function of family with sequence similarity 196 member B (FAM196B) in lung adenocarcinoma (LUAD). We analyzed lung carcinoma patients' data from the Cancer Genome Atlas (TCGA), and verify the change of FAM196B expression in 30 LUAD tissues and matched adjacent non-tumor tissues (> 5 cm) by tissue microarray. To investigate the role of FAM196B in LUAD, we used lentivirus-mediated short hairpin RNA (shRNA) to knockdown FAM196B expression in human LUAD cell line A549 and H1299 and assessed it by RT-qPCR and western blot. Celigo Imaging Cytometry System, MTT assays and colony formation were conducted to evaluate cell proliferation. Cell apoptosis were assayed by Annexin V staining. We found that FAM196B was significantly upregulated (P=5.06E-06) in LUAD compared with adjacent non-tumor tissues. Cell proliferation was inhibited in FAM196B-silenced A549 and H1299 cells using Celigo Imaging Cytometry System, MTT assays and colony formation assays. Apoptosis rate was significantly increased in FAM196B-shRNA group than the control group. In conclusion, Knockdown of FAM196B can inhibit cell proliferation, cell colony formation capacity, and promote cell apoptosis in A549 and H1299 cell lines. FAM196B may be one novel potential targets for treating patients with LUAD.

Lung cancer is the leading cause of cancer-related mortality worldwide. A total of 1.8 million people are diagnosed with lung cancer and 1.6 million die of the disease every year [1, 2]. Non-small cell lung cancer (NSCLC) accounts for approximately 80% of all lung cancer cases [3]. Lung adenocarcinoma (LUAD) has become the most common subtype accounting for 75% of NSCLC [4]. Although great advances have been made with therapies, the 5-year survival rate of lung cancer is still below 15% related to distant metastasis and local recurrence of the tumors [5]. The carcinogenesis and progression of LUAD are involving many genetic and environmental factors, and are multistep processes [6-8]. Although the study of LUAD has made great progress to date, the underlying molecular mechanisms remains largely unclear yet [9].Thus, it is important to investigate the genes involved in tumor progression, invasion and metastasis as well as identify their molecular mechanisms for the treatment and prognostic prediction of LUAD.

Family with sequence similarity 196 member B (FAM196B) locates at human chromosome 5q35.1 [10]. It includes two transcript variants (NM_001129891, 5981 bp; NM_001346304, 5962 bp) [11]. Chen and colleagues reported that FAM196B expressed higher in the embryonic ovary than the testis during mouse gonad development [12]. More recently, it was also reported that FAM196B was up-regulated in clear cell renal cell cancer cell line than finite cell lines [13]. Emerging evidence suggests FAM196B may participate in cancer development. However, little is known about the role of FAM196B in LUAD.

In this study, we analyzed the expression of FAM196B in LUAD using human LUAD tissues and data from the Cancer Genome Atlas (TCGA). The role and function of FAM196B in LUAD were explored by a series of experiments. We found that FAM196B expression was significantly up-regulated in LUAD, and lentivirus-mediated short hairpin RNA (shRNA) targeting FAM196B was used in order to ascertain its function in cell proliferation, cell cycle, and apoptosis in human Lung adenocarcinoma cell lines A549 and H1299. Our study revealed, for the first time that FAM196B was up-regulated in LUAD tissues and performs its biological functions in LUAD. These findings may provide valuable information for elucidation the pathogenesis mechanism of LUAD, and suggest that FAM196B may serve as a promising molecular target for LUAD treatments.

The SYBR Green Real-Time PCR assay kit (Takara, Japan) was used for quantitative real-time PCR (RT-PCR) on Mx3000P qPCR system (Agilent, Santa Clara, CA USA) light cycler 480 (Roche, Indianapolis, IN, USA). The quantitative RT-PCR comprised an initial denaturation at 95°C for 45 s, then 40 cycles at 95°C for 5 s, and 60°C for 30 s. The PCR products from FAM196B and GAPDH were 202 bp and 121 bp, respectively. All samples were analyzed in triplicate. GAPDH was amplified as an internal control. For Real-Time PCR data analysis, cycle threshold (Ct) difference (ΔCt) was used for making comparisons between samples. The relative mRNA expression (FAM196B/ GAPDH) was determined by the 2 -ΔΔCt method.

The lentiviral particles were produced by co-transfection of pGV115-shFAM196B/pGV115-shCtrl with pHelper system (Genechem, Shanghai, China) into 293T cells according to the manufacturer's instruction. Lentiviruses were harvested 48 h post-transfection.

FAM196B-shRNA and control cell cultures were trypsinized and resuspended , and then were seeded in five 96-well plates at a cell density of 2000 cells/100 μl/well. They were incubated at 37°C and 5% CO2 overnight. On the second day, we used Cellomics ArrayScan VTI (Thermo Fisher Scientific) to continuously measure the GFP expression in each well over a 5-d period. The data obtained were used for statistical data mapping and construction of cell proliferation curves.

To test the effect of FAM196B-shRNA on A549 and H1299 cell viability, MTT[3-(4,5-dimethylthiazol-2-yl)-2,5-diphenyltetrazoliumbromide]- based assay was used. Cells were plated into 96-well plates at a density of 2,000 cells/well in 100 μl medium and incubated for 24 hours. Then we used shCtrl, FAM196B-shRNA to treat these cells for 1, 2, 3, 4 and 5 days, respectively. 20 μl of 5 mg/ml MTT solution (Sigma, St Louis, MO, USA) was added per well and then the cells were incubated for another 4 h. Cell viability was assessed at 490/570 nm using multi-microplate test system (POLARstar OPTIMA, BMG Labtechnologies, Germany). Each experiment was performed in triplicate.

For colony formation assays, cells were seeded in six-well plates at a density of 300 cells/well with each experimental group being plated in three wells. The cells were incubated over a period of 10 d, and half of the medium was replaced every 3 d. The cell colonies were fixed with 1 mL paraformaldehyde each well (Sinopharm Group, Beijing, China) for 30 min followed by Giemsa staining (500 μL/well; Shanghai Dingguo, Shanghai, China) for 20 min. Finally, the colonies were photographed and counted by fluorescence microscopy (Olympus, Japan). Each experiment was performed in triplicate.

FAM196B-shRNA and control cell cultures were trypsinized and resuspended in logarithmic growth phase. After washing the cells, Annexin V-APC Apoptosis Detection Kit (eBioscience, USA) was used to assess the apoptosis according to the manufacturer's instructions. The cell concentration was adjusted to 1*106/mL with staining buffer; 100 μL of this suspension was stained with 5 μL AnnexinV-APC. The cells were analyzed using FCM within 1 h. Each experiment was performed in triplicate.

Relationships between the expression of FAM196B and clinicopathologic features. 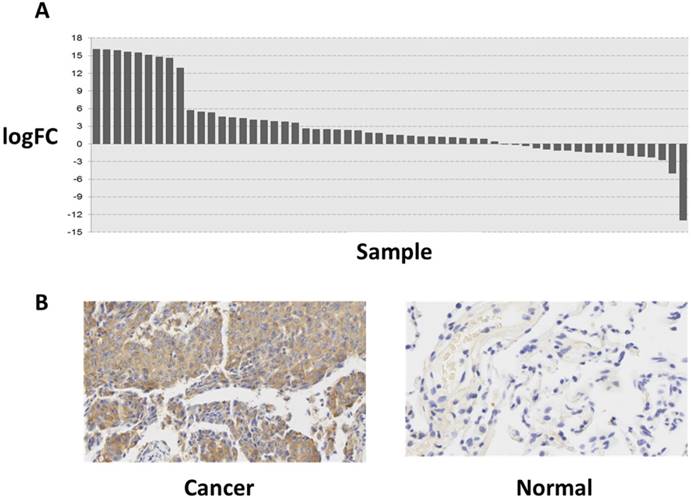 To examine the effect of FAM196B on cell growth, A549 and H1299 cells were infected with lentivirus with FAM196B-shRNA and control group in a 5-day study, both Celigo Imaging Cytometry System and MTT assays were synchronously applied for deciphering cell growth curve. As illustrated in Figure 4, cell proliferation was significantly inhibited in FAM196B-shRNA cells relative to the control cells as assessed by Celigo Imaging Cytometry System after transfection.

The mRNA expression level of endogenous FAM196B in A549 and H1299 cell lines were detected by RT-PCR analysis. GAPDH was housekeeping gene for normalization. 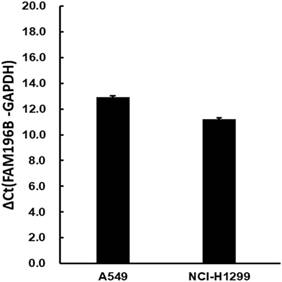 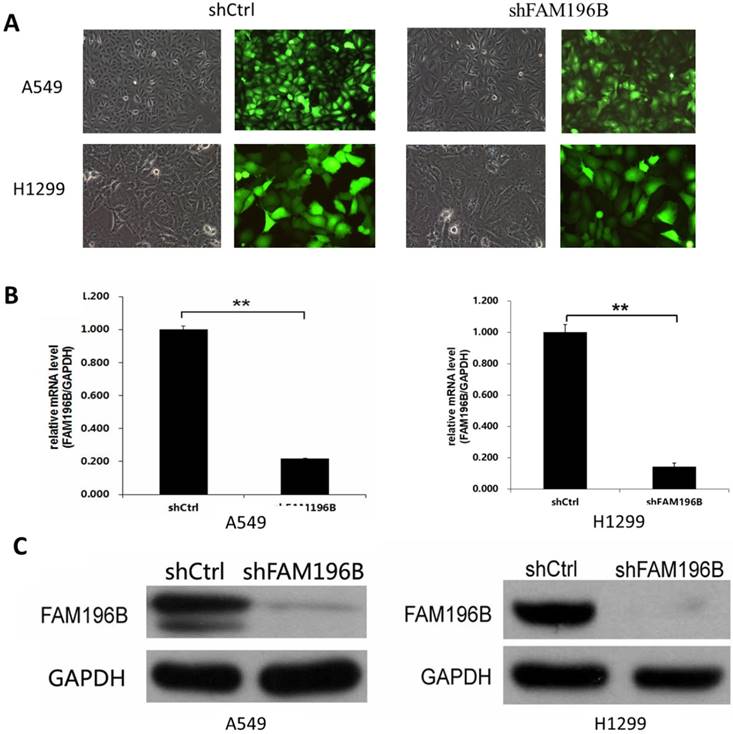 As revealed in Figure 7, in A549 and H1299 cell lines, the number of cell colony was significantly decreased after FAM196B-shRNA infection compared to shCtrl infection (P< 0.001).

The main aim of this study was to explore the biological function of FAM196B in human LUAD cells and to elucidate the role in lung carcinogenesis. Lung carcinogenesis is a multifactorial process, involving cell adhesion, dissemination, motility, degradations of basal membrane and ECM and angiogenesis [9, 14, 15]. As we know, dysregulation of oncogenes and tumor suppressor gene (TSG) has been shown to play an important role in controlling cell survival, proliferation, migration, invasion, cell cycle, and apoptosis in cancer [16, 17]. 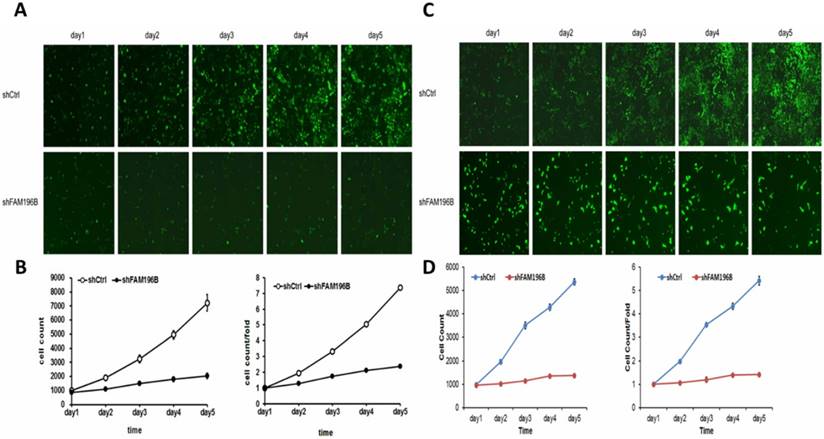 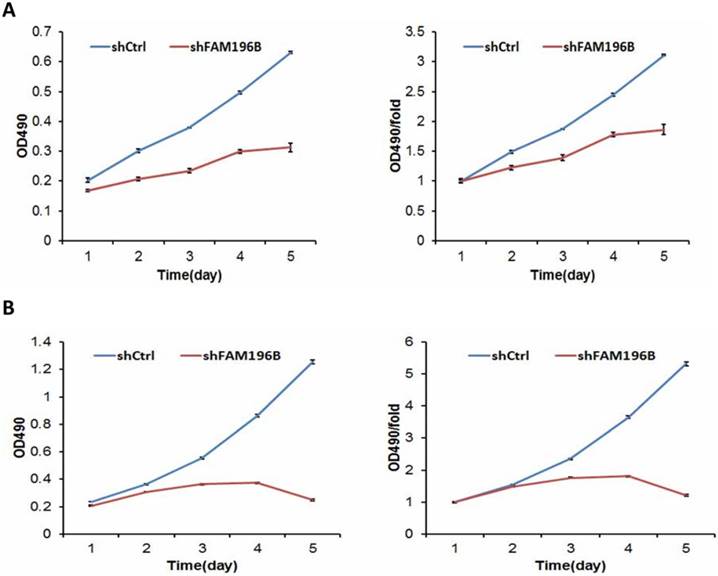 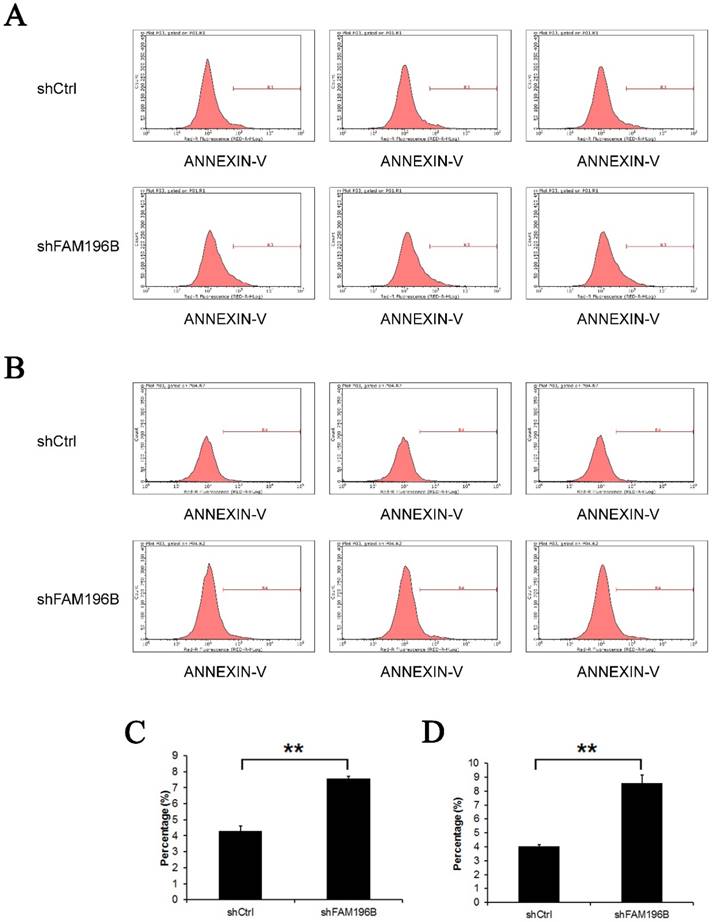 FAM196B is a protein coding gene and locates at 5q35.1. At present, it was only found that FAM196B was up-regulated in renal carcinoma [13].DNA methylation of FAM196B showed high differences in breast cancer [18].Recent studies showed that FAM196B expression was up-regulated in gastric cancer (GC) tissues and associated with poor tumor histology and T stage of GC. FAM196B also could promote gastric cancer cell proliferation through activating AKT signaling pathway [19]. At the same time, it was reported that oncogene MeCP2 could bind to the methylated CpG islands in the promoter region of FAM196B in GC [20]. 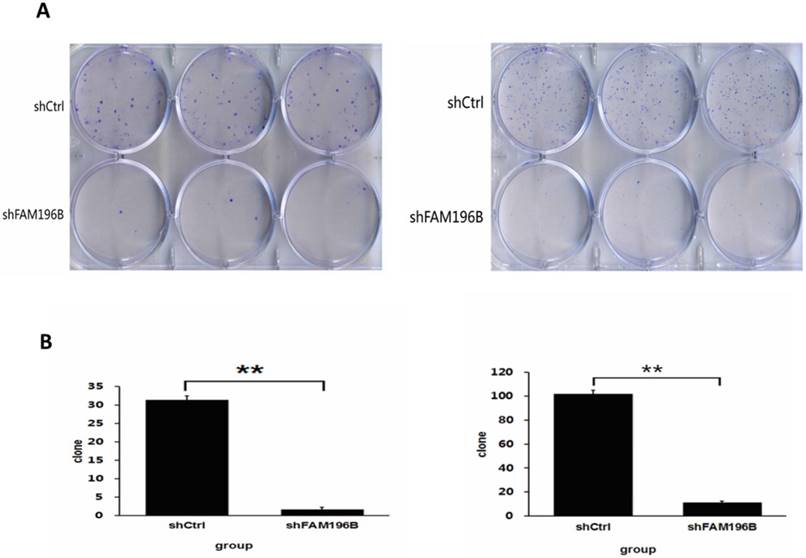 In the present study, we found that FAM196B is significantly up-regulated in LUAD tissues (P=5.06E-06) compared with adjacent non-tumor tissues through TCGA database. Due to the limitation of sample size,we did not found that FAM196B protein expression was correlated with age, gender, pathologic grade, tumar size, T stages,clinical stages, or lifetime. In the further study, more samples will be collected for indicating the correlation between FAM196B expression and LUAD clinical feature. We also found that FAM196B was abundantly expressed moderately both in LUAD A549 and H1299 cell lines. Therefore, we construct lentivirus-mediated FAM196B shRNA and transfect into A549 and H1299 cell lines.Our results showed that downregulation of FAM196B decreasing colony formation capacity and cell proliferation, and inducing the cell apoptosis (P<0.001, FAM196B-shRNA group vs. control group). Based on the above research results, FAM196B could regulate lung adenocarcinoma cells proliferation in vitro. Its in vivo role is necessary to be elucidated in the further study.

In summary, our study revealed that FAM196B expression was up-regulated in lung cancer tissues. Knockdown of FAM196B can inhibit cell proliferation and cell colony formation capacity, promote cell apoptosis in A549 and H1299 cell lines. These findings may provide new insights for the tumorigenesis and tumor progression in lung adenocarcinoma. Therefore, FAM196B may be one novel potential target for treating patients with lung adenocarcinoma.