Phosphodiesterases (PDEs) was found to be involved in a variety of cancer pathologies by modulating the degradation of levels of cAMP/cGMP. However, the prognostic significance and biological effect of PDE4a in hepatocellular carcinoma (HCC) have not been understood completely. In the present study, PDE4a expression was detected in a cohort of HCC and matched adjacent liver tissues (n = 210) by immunohistochemistry staining and Western immunoblotting assay, And in vitro experiments were conducted to determine the effect of PDE4a on metastatic capacity of HCC cells. The data here displayed that the majority of HCC patients had higher PDE4a expression in tumor tissues compared to matched adjacent liver tissues and enhanced PDE4a expression in tumor tissues was associated positively with HBV infection, liver cirrhosis, higher serum AFP level, advanced TNM stage, vascular embolus, intrahepatic metastases and portal vein tumor thrombus (PVTT). Survival analyses suggested that higher PDE4a was indicated the poor prognosis of HCCs after liver resection. Ectopic expression of PDE4a in Huh7 cells leaded to significant repression of E-cadherin and up-regulated the expression of N-cadherin and Vimentin, and facilitated migration and invasion abilities. Silencing PDE4a in MHCC97h cells acquired the opposite results. Taken together, PDE4a triggered EMT in HCC cells and acted as a predictive factor candidate and a potential therapeutic target for HCC.

Hepatocellular carcinoma (HCC) is one of the most fatal cancers which accountes for 745,500 deaths worldwide in 2012[1]. Although the great improvement has been achieved on the diagnosis and therapy for HCC, its prognosis remains unfavorable. Liver resection is still the most common curative treatment for HCC patients. However, 5-year post-surgical survival rate was approximately 30% after liver resection[2]. Frequent metastase smade theleading contribution to unfavorable prognosis of HCC after surgery[3]. Conventional predictive factors related to HCC patients including tumor size, vascular invasion, tumor-node-metastasis(TNM) stage, portal vein tumor thrombus(PVTT) and intrahepatic metastases have the limited clinical value. It is essential to find out the novel effective post-surgical predictive factors for HCCs. The accurate understanding of the underlying mechanism of HCC metastasis is critical to identify the efficacy prognostic biomarkers and therapeutic target.

Epithelial to mesenchymal transition (EMT) has been found been responsible for the diffusion of cancer cells and cancer progression, which was characterized that epithelial cells forfeited their polarity and cell-cell contacts because of supression of E-cadherin and up-regulated expression of mesenchymal markers such as N-cadherin and Vimentin[4]. Our previous investigation revealed that partial EMT process was often activated in HCC tissue[5-8], especially in the metastatic lesion, and facilitated HCC progression through mediating cell proliferation, migration, invasion and autophagy. However, it remains unclear about the concrete regulatory mechanism of EMT in HCC, up to now.

Disturbances of cyclic nucleotide signalings have been established as a composite of distrinct component pathways related with multiple aspects of cancer biology[9-11]. Phosphodiesterases (PDEs) was found to be involved in a variety of cancer pathologies by modulating the degradation of levels of cAMP/cGMP [12, 13]. PDE4 was a member of PDE family divided into 11 different families according to substrate preference and inhibitor sensitivity. And based on disparate splice variants and functional isoforms, PDE4 was also classified into 4 subfamily genes (A-D)[14]. PDE4a was found to be aberrantly up-regulated and promote cancer growth in various brain cancers including medulloblastoma and glioblastoma[15]. To date, there has been limited understanding about the role of PDE4a on hepatocarcinogenesis. This investigation revealed that PDE4a was aberrantly over-expressed in HCC tissues and predicted the worse post-surgical outcome, which could be caused by PDE4a-induced EMT.

Written informed consent was achieved from all HCC patients involved in this study. The use and collection of the samples were reviewed and approved by the ethics committee of the 309th Hospital of Chinese People's Liberation Army according to the Helsinki Declaration of 2013 (No.20070120, 20 Jan 2007). There were 210 HCC patients receiving curative liver resection between 2007 and 2009 in the 309th Hospital of Chinese People's Liberation Army recruited in the present study. Before hepatectomy, no patients received any chemotherapy and/or radiotherapy. During surgery, HCC tissues and adjacent liver tissues (>2 cm distance to the resection margin) were collected and skept in liquid nitrogen. Clinical data were collected from the electronic medical records and the details were presented in Table 1. Follow-up visits for the survival analysis were conducted for up to 90 months after surgery.

IHC assay against PDE4a was conducted as described previously[16]. The primary antibody targeting PDE4a was purchased from Abcam Co. (Catalog No.: ab14607, MA, USA). The score of IHC staining was evaluated by two experienced pathologists who observed all slides independently. Staining intensity was divided into four grades: 0 (negative), 1 (weakly positive), 2 (moderately positive), and 3 (strongly positive). The percentage of positive cells was classified into 5 grades including 0 for 0-5%, 1 for 6-25%, 2 for 26-50%, 3 for 51-75%, and 4 for > 75%. The ultimate score wasacquired by multiplying the staining intensity and the percentage of positive cells.

Cell migration capacity of HCC cells was detected by wound healing assay and transwell assay was carried out to measure the cell invasion of HCC cells as introduced previously[6].

3-(4,5-dimethylthiazol-2-yl)-2,5-diphenyltetrazolium bromide (MTT) assay was performed to detect cell viability. HCC cells were plateded in 96-well plates at 1 × 104 cells/well. After HCC cells were washed by PBS twice, 20 µl 5 mg/ml MTT was added to the culture medium. After incubation at 37°C for 4 h, HCC cells in each well were treated by 150 μl dimethyl sulfoxide from Sigma-Aldrich (MO, USA). The absorbance was examined at 570 mm. DNA uptake of 5-bromo-2 ' -deoxyuridine-5 ' -monophosphate (BrdU) was determined by ELISA assay. HCC cells were seeded into the 96-well plates at 5,000 cells per well. After 24h, ELISA assay was carried out using the BrdU ELISA kit (Roche, IN, USA). All tests were repeated at least six times.

All data were expressed as mean ± standard deviation (SD). The statistically significant differences (P<0.05) were tested by Mann-Whitney U or Student's t test. Comparison of the Kaplan-Meier survival curves of HCCs with higher and lower PDE4a expression in HCC tissues compared with adjacent liver tissues was conducted by the log-rank test. Multivariate analysis was carried out by SPSS V17.0 software (SPSS Inc., Chicago, IL, USA).

IHC staining assay showed that there was significantly more PDE4a expression in HCC tissues than adjacent liver tissus in 175 of 210 HCCs (83.3%). As shown in Fig.1A, PDE4a protein located predominantly in the cytoplasm. Mann-Whitney U test displayed that the IHC score of PDE4a protein in HCC tissues was notably higher than one in adjacent liver tissues (Fig.1B). After analysis of clinical features of HCCs, it was found that over-expression of PDE4a in HCC tissues was related positively with HBV infection, liver cirrhosis, higher serum AFP level, advanced TNM stage, microvascular invasion (MVI), intrahepatic metastases and portal vein tumor thrombus (PVTT) (Table 1). PDE4a expression was detected in human liver cell line LO2 and 5 kinds of human liver cancer cell lines including MHCC97h, SK-Hep1, PLC/PRF/5, Hep3B and Huh7 cells using both qRT-PCR and Western immunobloting assays. As shown in Fig.1C, there was the highest level of PDE4a expression in MHCC97h cells, whereas Huh7 cells had the least PDE4a expression. 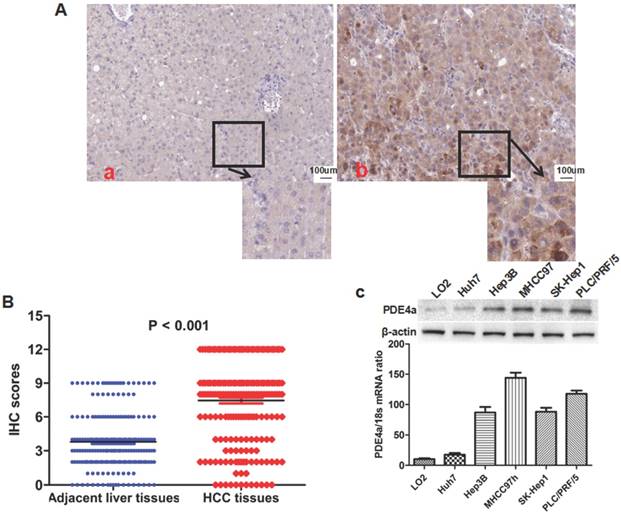 PDE4a predicted the unfavorable prognosis of HCC patients after liver resection. A. HCC patients with the higher PDE4a expression in tumor tissues had the magnificently higher post-surgical recurrence rates compared to those with the lower PDE4a expression in tumor tissues (P=0.004; HR=2.604; 95%CI:1.369-4.955); B. HCC patients from High PDE4a group had the shorter overall survival time than those from Low PDE4a group (P=0.022; HR=1.827; 95%CI: 1.092-3.057).

To further identify the oncogenic effect of PDE4a on HCC, siRNA sequences against PDE4a were transfected into MHCC97h cells and PDE4a expression was found inhibited dramatically by both qRT-PCR and Western immunoblotting (Fig.4A). MTT assay showed that silencing PDE4a leaded to significant repression of cell viability (Fig.4B). BrdU ELISA assay also revealed that cell proliferation of MHCC97h cells was restrained by repression of PDE4a (Fig.4C). Silencing PDE4a resulted in slower healing of scratch wounds inflicted on MHCC97h cells (Fig.4D). We carried out Transwell chamber (coated with the Matrigel) assay and found that the invasion capacity of MHCC97 cells was clearly impaired by knockdown of PDE4a (Fig.4E). In addition, knockdown of PDE4a increased E-cadherin expression and inhibited expression of N-cadherin and Vimentin (Fig.4F). TWIST expression was repressed by knockdown of PDE4a in MHCC97h cells (Fig.4F).

Liver resection is the most common curative treatment and the post-surgical outcome remains unfavorable[18]. Recent investigations demonstrated that the 5-year rate of intrahepatic recurrence of HCC after liver resection was approximately 60%-100% at 5-years after resection[19]. Herein, it is urgent to develop the novel biomarkers to predict the post-surgical recurrence and survival of HCC. PDE4a is one of 4 members of PDE4 family (PDE4a, PDE4b, PDE4c, and PDE4d). It has been revealed that PDE4a modulated several critical biological processes, for instance chemotaxis, cytokine secretion, and proliferation[20-22] through controlling the degradation of cyclic 3'5'-adenosine monophosphate into 5-adenosine monophosphate[20, 23]. There have been few studied reported about the role of PDE4a on cancer progression. Garcia-Manero group revealed that PDE4 expression was apparently higher in patients with myelodysplastic syndromes (MDS) than in healthy individuals and PDE4 over-expression had the negative effect on survival[24]. PDE4 was established by Lerner group as the most important target for PDE inhbitor-driven apoptosis in chronic lymphocytic leukemia (CLL)[25]. Epstein group showed that T leukemic cell lines including CEM and Jurkat had aberrantly high level of PDE4 protein expression and PDE4 inhibitor notably strengthened glucocorticoid-induced apoptosis in CEM cells, and attenuated glucocorticoid resistance in a glucocorticoid-resistant CEM cell line[26]. 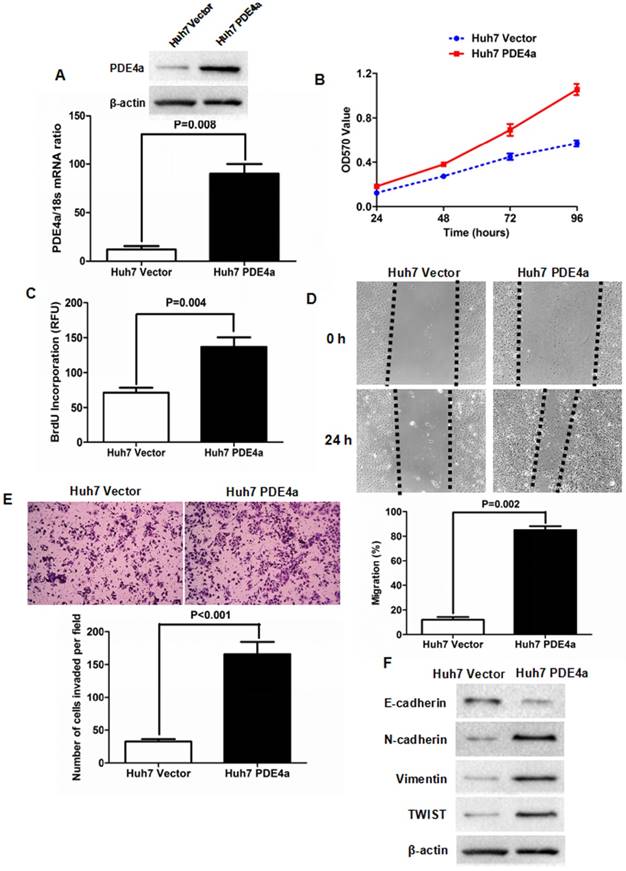 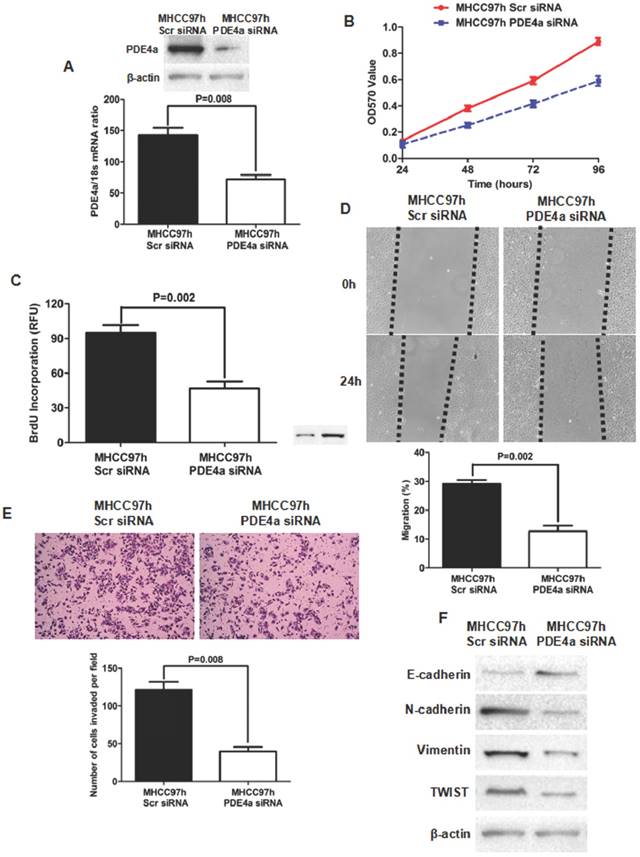 However, no studies about the effect of PDE4a on HCC have been found yet. In this investigation, we detected the expression of PDE4a in HCC and adjacent liver tissues harvested during liver resection. PDE4a expression in HCC tissues was found clearly higher than that in adjacent liver tissues. In addition, higher PDE4a expression in HCC tissues was associated positively with the several unfavorable clinical characteristics including HBV infection, liver cirrhosis, higher serum AFP level, advanced TNM stage, microvascular invasion (MVI), intrahepatic metastases and portal vein tumor thrombus (PVTT) and further identified as the independent predictive factors for the poor overall survival time after surgery. PDE4a expression was also found up-regulated in five kinds of HCC cell lines compared with normal liver cell line. These data suggested strongly that PDE4a potentially mediated HCC progression positively. Pullamsetti group found that PDE4a contributed to EMT in alveolar epithelial cells and furthermore played a pivotal role in the TGFβ1-induced EMT involved in pulmonary fibrosis and lung cancer[27]. Therefore, we determined here whether PDE4a accelerated HCC progression via inducing EMT. Enforced expression of PDE4a enhanced the cell proliferation, viability, migration and invasion of Huh7 cells significantly. Besides it, ectopic expression of PDE4a repressed E-cadherin expression in Huh7 cells, while increased expression of TWIST, N-cadherin and Vimentin. Silencing PDE4a by siRNA sequences suppressed the cell proliferation, viability, migration and invasion of MHCC97h cells obviously. And knockdown of PDE4a leaded to up-regulation of E-cadherin and down-regulation of TWIST, N-cadherin and Vimentin in MHCC97h cells, as well. These data supported that PDE4a enhanced the malignant behaviors of HCC cells via driving EMT.

In summary, the present investigation revealed that PDE4a was aberrantly over-expressed in HCC tissues and predicted the poor post-surgical prognosis of HCCs. And PDE4a was initially found contributing to EMT of HCC cells, which could explain that PDE4a over-expression in HCC tissues was correlated positively with the unfavourable prognosis of HCCs after hepatectomy. Taken togather, PDE4a is involved closely in HCC progression by inducing EMT and could be the important biomarkers to predict the outcome of HCC after liver resection and therapeutic target.