Conclusions: COR-BMI may serve as an indicator of poor prognosis in both NPC and metastatic NPC. Radiotherapy plus chemotherapy may benefit patients with a COR-BMI score of 1.

The aggressive head and neck cancer nasopharyngeal carcinoma (NPC) is endemic in a number of regions, including Southeast Asia. NPC is especially common in Southern China, where there are approximately 20-30 cases per 100,000 males and 8-15 cases per 100,000 females annually [1]. An epidemiological study conducted in China indicated NPC may be related to geographical district, diet, lifestyle, Epstein-Barr virus (EBV) infection and genetic factors [2]. NPC has high incidence of loco-regional spread and distant metastasis during the follow-up, though therapeutic methods have recently improved and radiotherapy and chemotherapy are generally effective. And the failure of treatments mostly due to the incidence of systemic metastasis and recurrence [3].

Currently, prognosis and treatment selection in NPC are mainly based on tumor location and stage. The American Joint Committee on Cancer (AJCC) TNM classification is most widely used for estimating prognosis and guiding treatment [4]. The National Comprehensive Cancer Network (NCCN) guidelines recommend magnetic resonance imaging (MRI), computed tomography (CT) as well as FDG PET/CT scan can be considered help to stage the patients [5]; Since MRI has a good capacity to depict the detailed and complex anatomic information, MRI has been widely used in the management of NPC, which revealed in a meta-analysis [6]. Despite the accuracy of such imaging assessments, the TNM staging system is far from perfect as it only considers tumor size and extension (T category) and lymph node involvement (N category), without considering other prognostic factors such as clinicopathologic data, treatment-related factors and tumor-associated markers.

The COR-BMI (Combination of Red Blood Cell Distribution Width and Body Mass Index) has been demonstrated to be a significant independent prognostic factor for cancer-specific survival in laryngeal squamous cell carcinoma [12]. As most studies have separately assessed the prognostic value of various markers of nutrition and inflammation, we conducted a large-scale, retrospective cohort study to assess the prognostic significance of the COR-BMI in NPC.

This was a retrospective observational study of patients without distant metastatic NPC upon diagnosis, who accepted radiotherapy with or without chemotherapy between January 2006 and April 2013 at Sun Yat-sen University Cancer Center (SYSUCC), Guangzhou, China. All 2,318 patients were restaged according to 7th edition of the AJCC/UICC tumor-node-metastasis (TNM) staging system [13]. This study was approved by the Clinical Research Ethics Committee of SYSUCC; all participants provided written informed consent prior to treatment. No informed consent (written or verbal) was obtained for use of retrospective data from the patients within this study, since this was not deemed necessary by the Ethics Committee.

All patients underwent a physical examination, routine hematology, fiber optic nasopharyngoscopy, pathological assessment of biopsy tissue, magnetic resonance imaging (MRI) of the nasopharynx and neck, abdominal ultrasound, chest radiography and an entire body bone scan, with or without positron emission tomography-computed tomography (PET-CT) before treatment to obtain a definite diagnosis and make sure that there was no metastasis at diagnosis. Thereafter, the clinical stage was classified according to the AJCC/UICC tumour-nodes-metastasis (TNM) staging system (the 7th edition).

Variables were allocated in groups according to the optimal cut-off value. The ideal cut-off values for RDW and EBV DNA copy number were determined by receiver operating characteristic (ROC) curve analysis. For BMI, it was categorized into three groups: BMI < 18.5, 18.5 ≤ BMI < 25, and BMI ≥ 25 [15]. The associations between the COR-BMI score and various clinicopathological variables were analyzed using the chi-square test. Cumulative survival was estimated using the Kaplan-Meier method, and the significance of the differences was assessed using the log-rank test. A multivariate Cox proportional hazard model was applied to examine the independent significance of the variables that proved significant (P < 0.05) in univariate analysis. Statistical analyses were performed using SPSS 22.0 software (IBM Corporation). Differences with P-values less than 0.05 were considered statistically significant.

A total of 2,318 patients with histopathologically-confirmed undifferentiated, non-keratinizing squamous cell NPC were assessed in this study. The characteristics of the patients are summarized in Table 1. Median age was 45 (range, 20-79) years; 561/2,318 (24.2%) patients received radiotherapy only and 1,757 (75.8%) received radiotherapy plus chemotherapy. Most patients (77.3%) were treated with IMRT. Overall, 2,037 (87.9%) patients had locally advanced NPC. In total, 394 (17%) patients died and 647 (27.9%) patients developed distant metastasis during follow-up.

Selected baseline characteristics of the 2,318 patients with nasopharyngeal carcinoma and the groups stratified by COR-BMI score

Kaplan-Meier overall survival (A) and disease-free survival (B) curves for the 2,318 patients with nasopharyngeal cancer stratified by COR-BMI score.

Univariate and multivariate analyses of overall survival for the 2,318 patients with nasopharyngeal carcinoma

Kaplan-Meier overall survival curves for the subgroup of 647 patients with metastatic NPC who developed distant metastasis during the follow-up stratified by COR-BMI score. 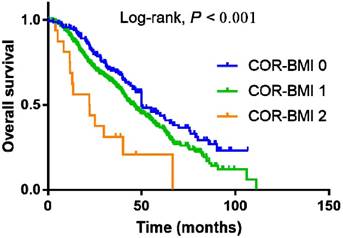 Subgroup analysis of the associations between COR-BMI and treatment

Kaplan-Meier overall survival curves for patients with COR-BMI scores of 0 (A), 1 (B) and 2 (C) stratified by treatment: radiotherapy and chemotherapy (RT + CT) or radiotherapy alone (RT).

Red cell distribution width (RDW) is used to quantify anisocytosis in peripheral blood and indicate the efficiency of erythropoiesis. And it is related to chronic inflammation and markers of acute phase inflammation, including interleukin-6, soluble tumor necrosis factor (TNF) receptor I and soluble TNF receptor II, C-reactive protein and prealbumin, as well as signs of nutritional deficiency, such as the levels of iron, vitamin B12, folic acid, total cholesterol and albumin [16, 17]. Inflammation may increase RDW by impairing iron metabolism and inhibiting the response to erythropoietin [18]. Therefore, this marker is associated with adverse outcomes. RDW was significantly elevated in a cohort of patients with various types of malignancies. Recent studies revealed that RDW level increased with the progression of cancer stage in renal cell carcinoma [19] and lung cancer [20]. However, Seretis et al. [21] reported that RDW was inversely associated with the tumor grade in breast cancer. Another study suggested elevated preoperative RDW (≥ 15%) was independently associated with poorer DFS (P = 0.043, HR = 1.907, 95% CI = 1.020-3.565) and OS (P = 0.042, HR = 1.895, 95% CI = 1.023-3.508) among patients with esophageal carcinoma [22]. Furthermore, a nomogram identified RDW as potential prognostic biomarker in esophageal squamous cell carcinoma (P = 0.036), with a Harrell's c-index of 0.68 for prediction of cause-specific survival [23].

Malnutrition has been reported significantly and apparently associated with OS among cancer patients [24]. Body mass index (BMI) was a nutrition-related factor and has been found to have prognostic significance in cancer patients. Thus, studies have found that low BMI before treatment or weight loss during therapy led to a poorer survival. A review [25] recently have revealed that patients with higher BMI had increased overall survival and decreased disease-related mortality and recurrence rate compared with underweight and normal weight in head and neck cancer patients. However, no definite associations have yet been reported between pretreatment BMI or weight loss and clinical outcome in NPC, especially in the modern era of IMRT-based therapy. In fact, Lin et al. [26] reported no significant relationship between BMI or percentage weight loss in NPC. Similarly, individual nutritional factors, such as hemoglobin, albumin, RDW and BMI were not prognostic factors in this cohort of patients with NPC.

One potential limitation of the current study is that it was a retrospective, single-center analysis. However, few studies have previously assessed the prognostic value of COR-BMI. Second, the radiotherapeutic techniques used in this study varied greatly, although most patients received IMRT. Compared to conventional 2D and conformational 3D radiation techniques, patients treated with IMRT are more likely to complete their prescribed treatment plan within the planned time and have fewer acute side effects, including weight loss [27]. Moreover, we did not take into consideration the impact of different chemotherapy regimens on nutritional measures and the resulting effects on prognosis. Thus, further stratified analysis is required. Another limitation was that COR-BMI was not confirmed as an independent predictor of disease-free survival (DFS), which we employed as a surrogate end-point. Therefore, the findings of this study need to be confirmed by assessing additional outcome measures. Further prospective studies are required to establish the value of COR-BMI as pretreatment biomarker of prognosis and treatment outcomes in NPC.

This work was supported by a grant from the Natural Science Foundation of Guangdong Province, China [No. 2016A020215083]; Medical Science and Technology Research Foundation of Guangdong Province, China [grant number A02016031]. The funding agency had no role in the study design, data collection and analysis, decision to publish, or preparation of the manuscript.

4. Edge SB, Compton CC. The American Joint Committee on Cancer: the 7th edition of the AJCC cancer staging manual and the future of TNM. Annals of surgical oncology. 2010;17:1471-4