Background: Aberrant DNA methylation, especially tumor suppressor gene hypermethylation, is a well-recognized biomarker of initial tumorogenesis stages. FAT4 and SOX11 are putative tumor suppressor genes and can be down-regulated by hypermethylation in various cancers tissues. However, in peripheral blood leukocytes, the association between these two genes methylation status, as well as the effects of gene-environment interactions, and gastric cancer (GC) risk remain unclear.

Conclusions: FAT4 aberrant methylation in peripheral blood leukocytes and gene-environment interactions were associated with the risk of GC, while SOX11 was controversial and needed to be more investigated.

Gastric cancer (GC), a neoplasm with aggressive and highly proliferative condition, contributes considerable healthy burden from a global perspective. According to the Globocan 2012, GC is the fifth most common malignancy and ranks as the third leading cause of cancer-related death in the world [1]. In China, GC has become the second leading cause of cancer death. According to the statistics, 679,100 new GC cases and 498,000 cancer deaths are estimated to occur in 2015 [2]. Although GC showed a decreasing incidence and mortality trend in recent years, population growth and aging will still lead to a large number of new cases in China [2].

It is well recognized that the development of GC is a multifactorial induction process, genetic and epigenetic alterations are involved in it as critical contributors. Nowadays, much attention has been paid to epigenetic alterations, which can induce heritable changes in gene expression without any alterations in the primary DNA sequence [3]. DNA methylation, which plays a key role in gene transcription and expression programming, is one of the most extensively studied epigenetic alterations. Aberrant DNA methylation frequently occurs at CpG islands within promoter regions, leading to transcription inhibition and gene inactivation, and is recognized as a critical component of the mechanism underlying tumorigenesis [4]. Several studies have demonstrated that aberrant DNA methylation can be a driver event in the pathogenesis of cancers GC [5-7].

FAT4, which located at the apical point of the Hippo signaling pathway, controls the size of organs by modulating cell growth, proliferation, and apoptosis [8, 9]. SOX11 encodes a member of the group C SOX (SRY-related HMG-box) transcription factor family that participates in cell proliferation, embryonic neurogenesis and tissue remodeling [10]. Both SOX11 and FAT4 are supposed to be potential tumor suppressor genes and can be down-regulated by promoter aberrant methylation modification in several cancers, including GC [11-14]. It has been also reported that FAT4 functions as a GC suppressor gene by modulating Wnt/β-catenin signaling [15], and aberrant SOX11 promoter methylation is related to the clinical outcome of GC [16, 17].

Multiple environmental factors, including H. pylori infection, can profoundly influence tumorigenesis [18]. Recently, growing evidences have revealed that environmental factors may induce epigenetic alterations to further increase cancer susceptibility [19-23]. In addition, previous studies frequently focused on tumor tissues to examine DNA methylation status. However, in comparison with tissues which usually display incomplete heterogeneity information, blood samples may capture the entire heterogeneity of cancer [24]. DNA methylation in the peripheral blood leukocytes is also linked to the susceptibility to several cancers according to recent studies [25-27]. Therefore, we carried out this case-control study to detect the methylation status of FAT4 and SOX11 in peripheral blood leukocytes and investigate the association between genes methylation, gene-environment interactions, and GC risk.

Genomic DNA was extracted and then bisulfite-modified using the QIAamp DNA Blood Mini Kit (Qiagen, Hilden, Germany) and EpiTect Plus DNA Bisulfite Kit (Qiagen) according to the manufacturer's instructions, respectively. DNA quantity was measured by the Nanodrop 2000 Spectrophotometer (Thermo scientific) and bisulfite-modified DNA was stored at -20℃ until use.

Serologic tests of the H.pylory by ELISA

The serologic test for H.pylori IgG antibodies were performed in duplicate using an enzyme immunoassay kit (IBL, German). The sensitivity and specificity of the kit were all greater than 95% according to the manufacturer's instructions.

Primers used for amplifying FAT4 gene CpG rich regions were designed using Primer Premier 5.0 software. For SOX11, primers were selected from previously published study [28]. The primer sequences used are listed in Table S1. PCR amplification and MS-HRM assay was performed on a LightCycler480 (Roche Applied Science, Mannheim, Germany) equipped with Gene Scanning software (version 2.0) to detect and analyze the methylation status of genes. The final volume of each reaction system was 5µl, including 2.5µl of LightCycler480 High Resolution Melting Master Mix (Roche), 0.5µl of sodium bisulfite-modified template DNA, 0.1 µl of each forward and reverse primer, and 0.6 µl MgCl2. A series of methylated DNA standards (100%, 2%, 1%, 0.5% and 0% methylated DNA) were constructed by mixing universal unmethylated (0% methylated) and methylated (100% methylated) human whole genomic DNA samples (Zymo Research). The profiles of normalized melting curves and melting peaks of the MS-HRM assay for each gene were shown in Figure 1-2. The methylation status of genes was determined by comparing the curve of each sample with the standards curves. Then, 0% and 0.5% methylated DNA served as the cut-off values to distinguish negative methylation (Nm) and positive methylation (Pm), respectively. Heterogeneous methylation (Hm) was defined when samples melting curves presented a wider peak than the unmethylation peak or a methylation peak but before the real methylation melting profile. Total positive methylation (Tpm) was defined as Hm and Pm. In addition, DNA-free distilled water was used as blank control (no-template control) in each batch, and second trials were conducted for the unsure results. 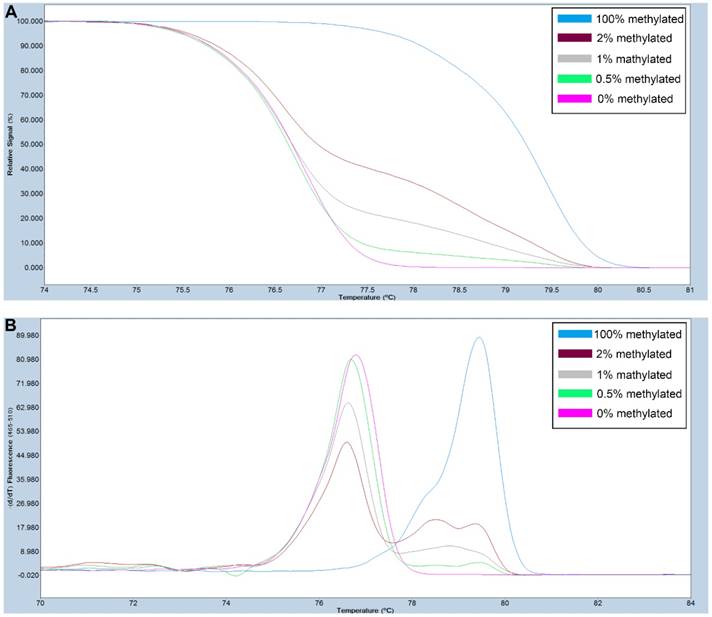 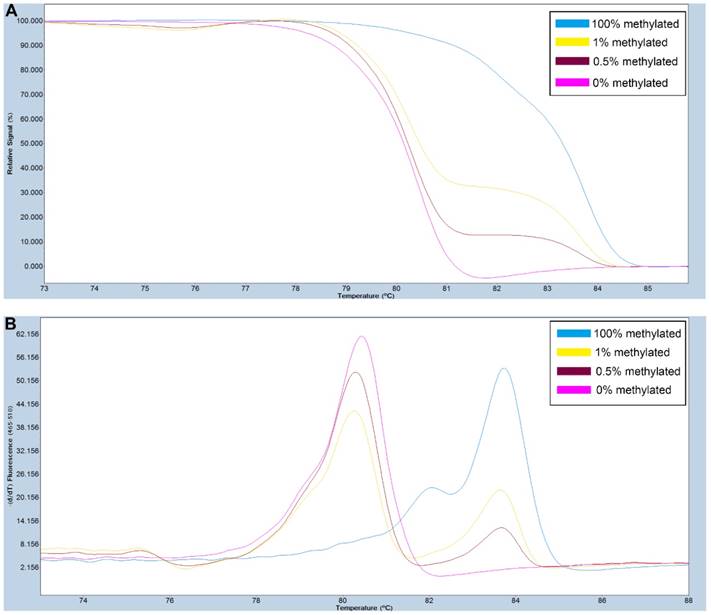 A total of 375 cases and 394 controls were enrolled in this study. The basic characteristics of these subjects are presented in Table 1. The distribution of BMI and occupation between cases and controls was statistically different (P < 0.001). The proportion of members with family history of GC in cases (12.8%) was higher than that in controls (1.8%; P < 0.001).

Association between the methylation status of FAT4, SOX11 and GC risk

Association between methylation status of FAT4, SOX11 and GC risk.

Association between methylation status of genes and risk of GC by age.

Association between methylation status of genes and risk of GC by H.pylori infection.

Interactions between FAT4, SOX11 methylation and environmental factors on the risk of GC

Aberrant DNA methylation, which leads to inappropriate silencing of tumor suppressor and other cancer-related genes in cancer cells, is the most well-defined epigenetic change in the initiation and progression of GC [5]. Two considered potential tumor suppressor genes FAT4 and SOX11 involved in this study have been shown to participate in a series of cancer related molecular events. FAT4 exerts a tumor suppressor role in GC cell lines by modulating Wnt/β-catenin signaling [15]. Aberrant SOX11 promoter methylation has been demonstrated to be associated with poor prognosis in GC [17]. Results in this research indicated that compared with Nm, subjects with FAT4 Pm and Tpm exhibited 2.204-fold and 1.583-fold increased risk of GC, respectively. SOX11 Pm associated with the risk of GC (OR = 2.530), while Tpm and Hm had no association with GC risk. Inconsistent with our findings, Tomomitsu Tahara et al. failed to find any association between SOX11 methylation in blood-derived DNA and GC risk [25], perhaps due to relative small sample size (72 GC patients and 69 controls) and different detection methods.

It has been uncovered that aging can alter DNA methylation, and H. pylori infection can trigger inflammatory response and then also induce accumulated aberrant DNA methylation [22, 29]. Based on above mentioned points, we performed stratified analyses by age and H. pylori infection. The result of age-stratified analysis indicated that individuals with SOX11 methylation had a higher risk of GC only in elder, which might help explain the late onset of GC. Moreover, significant associations between SOX11 Pm and GC risk retained in both the H. pylori positive and negative subjects.

In this study, univariate and multivariate logistic regression analysis showed that freshwater fish was a risk factor for GC, which was somewhat unexpected. Several researches have reported that freshwater fish raised in contaminated water may have a relatively high level of toxic chemicals that could increase susceptibility to cancer [43-45], which to some extent explained our unexpected result. Besides, an antagonistic interaction between FAT4 methylation and increased consumption of freshwater fish was also observed. Freshwater fish is rich in methionine, which serves as the substrate for S-adenosyl methionine (SAM) and plays a critical role in maintaining the flux of methyl groups for remethylation [46]. Long-term low dietary methionine intake can disturb methionine cycle and then induce normally non-methylated DNA situation to be aberrantly hypermethylated [47], which could provide a biologically plausible basis to FAT4-fish interactions. Furthermore, analyses of the relationship between FAT4 methylation and environmental factors in all subjects showed that freshwater fish could decrease the risk of FAT4 methylation, which might further help account for this interaction.

High salt intake was found to be another GC risk factor in this study. In addition, SOX11 methylation interacted with high salt intake displayed an antagonistic effect on GC risk was also observed. Although no significant association between SOX11 methylation and high salt intake existed in all subjects, negative association was observed in cases (P = 0.043; data not shown), which might provide another way to support the observed antagonistic interaction. Environmental factors may influence tumorigenesis by affecting the process of DNA methylation of certain key genes [48, 49]. Making changes in environmental exposures might provide an opportunity to inhibit or reverse this process and then counteract cancer [50]. However, the potential biological mechanisms underlying environmental factors interfering with DNA methylation in the initiation and progression of GC are complex and variable, further explorations are needed.

There are two main limitations in this case-control study. First, recall bias might still be inevitable in the process of collecting information on environmental factors, although measures were taken to control this bias. Second, the observed methylation changes in GC patients occurred before or after tumorigenesis remain unclear.

In conclusion, this study suggested that FAT4 methylation in peripheral blood leukocytes was associated with the risk of GC, while SOX11 was controversial and needs to be more investigated. Gene methylation status interacted with environmental factors might influence GC susceptibility.

This study was funded by the National Natural Science Foundation of China (2016-2019, Grant No. 81573219) and Innovation Research Program of Harbin Medical University (2016JCZX22).

All procedures performed in studies involving human participants were in accordance with the ethical standards of the Human Research and Ethics Committee of Harbin Medical University.