Methods: From September 2008 to March 2010, a total of 146 ESCC patients received radical esophagectomy were retrospectively analyzed in our present study. PD-L1 expression and CD8+ T cell infiltration were evaluated through immunohistochemistry. The clinicopathological characteristics and survival were analyzed.

Conclusions: PD-L1 expression was an independent risk factor for the prognosis of ESCC patients. Immunotherapy may achieve promising outcomes in ESCC patients with type I TIM.

ESCC is the sixth most common cancer and is ranked fourth in the cancer related mortality in China. Commonly, the incidence of ESCC is highest in central China, and the clinicopathological features are different from the West [1,2]. Although multidisciplinary therapies have been applied to the treatment of ESCC, the prognosis of patients is still not promising [2].

PD-L1 belongs to the B7 super-family, which is expressed on activated T cells, B cells, dendritic cells, macrophages, and also on tumor cells [3,4]. PD-1 is expressed on the surface of immune cells. The binding of PD-L1/PD-1 could enable tumor cells to avoid antitumor immunity [5]. Thus, the immunotherapy, targeting the PD-L1/PD-1 immune checkpoint, has been an emerging field. Several clinical trials have shown promising antitumor activity of PD-L1/PD-1 blockade in several malignancies [6-11]. However, not all patients obtained favorable response and durable efficacy [12,13]. This may attribute to the different type of TIM in tumor tissues. Based on the expression of PD-L1 on tumor cells and CD8+ T cell infiltration in tumor tissues, TIM was classified into four types: type I (PD-L1+/CD8 High, adaptive immune resistance), type II (PD-L1-/CD8 Low, immune ignorance type), type III (PD-L1+/CD8 Low, intrinsic induction of PD-L1 in the absence of TILs), and type IV (PD-L1-/CD8 High, components other than PD-L1 suppressing the action of TILs) [14]. It was reported that type of TIM was a potentially powerful biomarker for the prognosis of solid cancers [15], and type I TIM have been demonstrated to be a potential subgroup for anti-PD-1 or anti-PD-L1 immunotherapy [7,16,17].

This study was performed in the Xijing Hospital of Digestive Diseases affiliated to the Fourth Military Medical University. From September 2008 to March 2010, a total of 146 ESCC patients were enrolled in our present study. The inclusion criteria were listed as follows: 1. treated with radical esophagectomy, 2. with follow up data. The exclusion criteria were: 1. with neoadjuvant chemotherapy, 2. with distant metastasis, 3. with other malignancies. The clinicopathological data including age, gender, tumor location, tumor size, differentiation status, tumor depth, lymph node metastasis and TNM stage were recorded. The tumors were staged according to the seventh edition of the American Joint Committee on Cancer TNM classification. The patients were followed up until November 2016 by enhanced CT every 3 months. This study was approved by the Ethics Committee of Xijing Hospital, and written informed consent was obtained from all patients before surgery.

The tissues were fixed with 4% formaldehyde, embedded in paraffin and sectioned serially at 4 μm thickness. Briefly, the sections were deparaffinized in xylene, dehydrated with graded ethanol, pretreated in citrate buffer with 2 minutes in a pressure cooker for antigen retrieval, and then blocked with 3% H2O2 for 10 mins, goat serum for 10 mins. After blocking, the sections were incubated with rabbit anti-PD-L1 monoclonal antibody (1:200, ab13684S, Cell Signaling Technology, USA) or anti-CD8+ monoclonal antibody (1:50, clone: C8/144B, ZSDB, China) at 4°C overnight, and then incubated with HRP-Polymer anti-rabbit IHC Kit (Fuzhou Maixin Biotechnology, China) at room temperature for 30 minutes according to the manufacturer's instructions.

All tissue slides were evaluated by 3 independent pathologists. The immunoreactivity scoring system (IRS) was calculated based on the intensity category and percentage category. The intensity category of immunostaining was graded as follows: 0 (negative), 1 (weak), 2 (moderate) and 3 (strong). The percentage category was graded as follows: 0 (negative), 1 (1%-30%), 2 (31% to 60%) and 3 (61%-100%). The IRS was calculated by multiplication of both categories [23]. Then, the expression of PD-L1 was classified as negative (0≤IRS≤2) and positive (3≤IRS≤9) based on IRS. In order to ensure the quality control during IHC evaluation, positive and negative control was used during IHC to exclude nonspecific staining[24-27]. Tissue slides were evaluated by 3 independent pathologists who were blinded to clinical outcomes. When the results were inconsistent, the results were discussed by the 3 independent pathologists to make a final evaluation. The numbers of CD8+ T cell were counted in 6-10 high power magnification (40x) field with the most abundant distribution of CD8+ cells within tumor. The average numbers of CD8+ T cell per high power magnification field (HPF) were recorded. The CD8 high and CD8 low groups were defined using the 66th percentile of the average as the cut-off value. Based on density of CD8+ T cell and expression of PD-L1, type of TIM was classified into four types: type I (PD-L1+/CD8 high), type II (PD-L1-/CD8 low), type III (PD-L1+/CD8 low) and type IV (PD-L1-/CD8 high).

Comparison of clinicopathological features of ESCC patients according to PD-L1 expression and CD8+ cell infiltration. 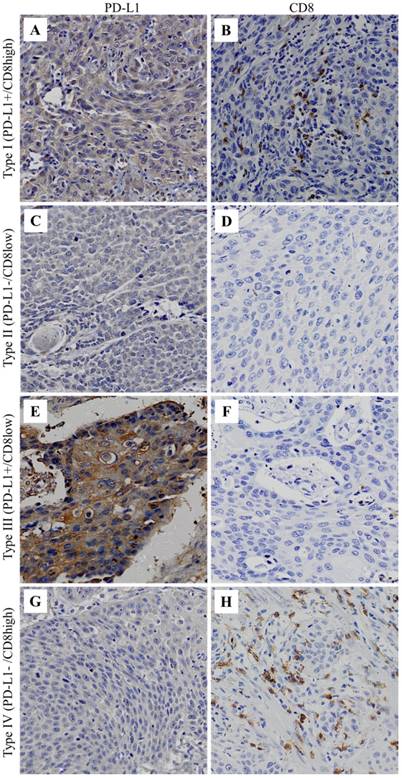 The TIM of ESCC were classified into four types according to PD-L1 expression and CD8+ T cell infiltration (Figure 1). The distribution of the four types was 22.0% for type I, 26.0% for type II, 39.7% for type III and 12.3% for type IV. The associations between clinicopathological features and type of TIM were shown in Table 2. The results showed that only differentiation status was significantly associated with TIM (P=0.001).

Multivariate analysis of risk factors for prognosis of ESCC patients.

Overall survival according to the PD-L1 expression on tumor cells. 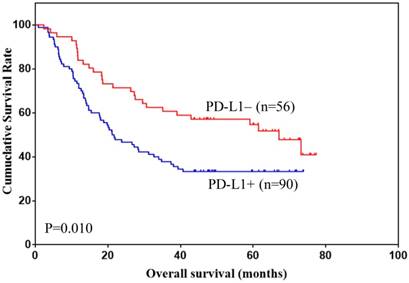 Overall survival according to type of TIM. 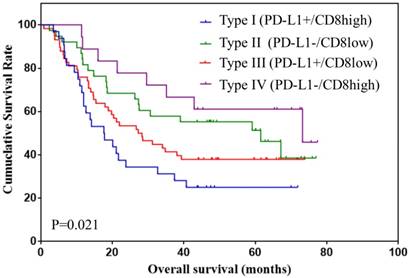 Type of TIM was reported to be associated with the prognosis of gastric cancer [48,49]. Ma et al. demonstrated that PD-L1-/CD8+ gastric cancer had the best overall survival, and PD-L1+/CD8- gastric cancer had the worst overall survival [48]. Koh et al. also showed that PD-L1-/CD8 high gastric cancer had the best overall survival, but PD-L1-/CD8 low gastric cancer had the worst overall survival [49]. Up to date, prognostic value of TIM by co-assessment of PD-L1 expression and CD8+ T cell infiltration has not been investigated in ESCC yet. Only two study showed that PD-L1-/CD3 low subgroup or PD-L1+ /TIL low subgroup associated with worse DFS and OS in ESCC patients, respectively [31,35]. Recently, a study showed that the high intratumoral CD3 infiltration was correlated with favourable OS and DFS. Moreover, type classification based on intratumoral CD3 infiltration and PD-L1 expression on tumor cell was an independent prognostic factor for nasopharyngeal carcinoma patients. Nevertheless, peritumoral CD3 infiltration showed non prognostic value for OS and DFS[50]. These observations revealed the importance of local complex interaction microenvironment. In present study, for the first time, we investigated the value of TIM classification based on intratumoral CD8+ T cell infiltration and PD-L1 expression on tumor cell, and found that PD-L1-/CD8 high had the best overall survival, whereas PD-L1+/CD8 high had the worst overall survival. PD-L1 expression on tumor cells could favorably prognoses clinical outcome in nasopharyngeal carcinoma patients with pre-existing intratumor CD3 infiltrating lymphocytes[50]. It was reported that tumor regression after PD-L1/PD-1 blockade requires pre-existing CD8+ T cells [9]. In our study, we found that PD-L1+/CD8 high had the worst overall survival. From a treatment standpoint, this type of TIM maybe gain the maximum healing effect in potential immunotherapy of ESCC patients. Therefore, our findings indicated that type I (PD-L1+/CD8 high) ESCC could serve as candidate for anti-PD-1 or anti-PD-L1 immunotherapy.

There were some limitations in our present study. First, it was a retrospective study at a single institution, and the sample was relatively small. The findings in our study need further confirmation based on multicenter analysis with large sample size. Second, we did not analyze other tumor infiltrating immune cells in ESCC tissues. Thirdly, this study didn't investigate the relevance between the PD1 status on CD8+ T cells and clinical parameters. Fourthly, the disease free survival and disease specific survival of ESCC patients were not recorded and analyzed.

For the first time, the present study analyzed the associations between clinicopathological features and prognosis of ESCC patients and type of TIM based on co-assessment of PD-L1 expression and CD8+ T cell infiltration. We found that PD-L1 expression was not associated with clinicopathological features of ESCC. However, it was independently correlated with poor overall survival of ESCC. Further, we found that type of TIM was significantly associated with the prognosis of ESCC, which indicated that ESCC with type I TIM (PD-L1+/CD8 high) may achieve promising clinical outcomes through PD-L1/PD-1 blockade immunotherapy.

All relevant data of the study were already included in the manuscript.

This study was approved by the Ethics Committee of Xijing Hospital. Written informed consent was obtained from the patient for publication of this manuscript and any accompanying images.