Pancreatic cancer is one of the most lethal malignancies with increasing incidence and mortality worldwide[1]. Most patients with the disease are diagnosed at advanced stage, making them ineligible for curative treatment[2-4]. Even for patients with early stage disease, intrahepatic metastases were frequently occurred after curative resection[5-7]. In contrast, traditional chemotherapy and targeted therapy has been unsatisfactory in treatment of metastatic pancreatic cancer so far[8, 9]. Though clinical approaches, such as imaging, pathology and serum tumor markers were widely used to monitor disease progression currently, detection and assessment of early intrahepatic metastases are still challenging for pancreatic cancer[3]. There is an urgent need to discover more informative biomarkers to assess the tumor burden and intrahepatic metastatic risk of pancreatic cancer.

Circulating tumor cells (CTCs), shed from primary tumor into circulation, are considered precursors for metastases[10-12]. It has been explored as a less invasive biomarker for assessing solid tumor burden[13-15]. Previous studies have demonstrated that CTCs in peripheral circulation may serve as a predictive marker for metastases and overall survival in patients with breast cancer[16, 17] , prostate cancer[13, 18-21], and hepatocellular carcinoma[22, 23]. Furthermore, Aceto et al revealed that CTCs were oligo-clonal precursors of breast cancer metastasis in vivo[16]. It is anticipated that quantification and molecular subtyping of CTCs could be adopted for monitoring tumor burden and metastasis of pancreatic cancer[24, 25]. However, CTCs are extremely rare with an estimates of one CTC per billion blood cells in patients with pancreatic cancer. Detection of rare CTCs in peripheral blood of pancreatic cancer was challenging with current available techniques [26, 27].Recently, Poruk et al analyzed CTCs of 60 resectable pancreatic cancer, only forty-six patients (77%) were found CTCs positive with the median number of 4 CTC/mL in peripheral blood[28]. Importantly, bloodstream of pancreas flows through the portal vein into the liver, the hepatic filtration effect may reduce CTCs into peripheral circulation and increased the difficulty of detection CTCs in peripheral circulation[24, 27]. Catenacci et al first reported that portal CTCs are far more common in portal vein than in peripheral circulation in patients with pancreaticobiliary carcinoma[27], and they found portal vein blood contains more CTCs in pancreatic cancer patients. Though they did not further investigate the correlation between clinical features and portal vein CTCs because of the smaller sample size and heterogeneity of the patients, analysis of portal vein CTCs holds great promise for providing new insight into metastasis of pancreatic cancer.

29 patients with advanced pancreatic cancer were enrolled at Zhongshan Hospital Fudan University between February 2016 and January 2017. All patients received gemcitabine-based chemotherapy and arterial infusion chemotherapy at the medical center. A compete catalogue of clinical parameters, pathological data and radiographic data were collected from the electronic database of Zhongshan Hospital. Intrahepatic tumor burden was assessed according the radiography data. Tumor sites and maximum tumor size was assessed by two radiologist (GFZ and YZ). As described in our previous reports, follow-up was made by telephone call every 3 months by a full time clinical investigator. None of the patients lost to follow-up during the study. Vital status was obtained and survival time was estimated from the first treatment to death. Details of the chemotherapy or infusion chemotherapy treatment have been described previously. The study was approved by the Ethics Committee of Zhongshan Hospital Fudan University (No. B2014-098; No. B2017-048). The study was performed in accordance with the principles of Declaration of Helsinki.

Samples Collection and Isolation of CTCs

Fine-needle aspirates (FNA) biopsy was performed in standard procedure. Then we identified the intrahepatic portal vein under the ultrasonography guidance. A 20-guage needle was punctured into the portal vein trans-hepatically (Figure 1). 1 to 3 aliquots of 7.5 ml blood samples were aspirated from portal-vein and draw into 10ml Streck preservation tubes (Streck 218962, USA). Peripheral blood was then collected in parallel and processed identically. The blood sample was processed using the ClearBridge ClearCell FX systemTM (ClearBridge Biomedics, Singapore) [29]. Samples were further negatively sorted to remove the CD45 positive monocytes using EasySep™ Human CD45 Depletion Kit (18259RF, StemCell, USA). The identification of CTCs was based on immunofluorescence staining. CK19 or EpCAM positive cells was recognized as potential CTCs. Multicellular groupings of CTCs (CTC cellular ≥ 3) was considered as CTC cluster.

Drug sensitivity test of the CTCs

After depletion of CD45 positive cells, CTCs was transferred into a 1.5 mL tube, and washed three times using 1× PBS (with 1% penicillin and streptomycin). Then the CTCs was transferred into ultra-low attachment 96-well plate for short-time expansion (2~4 days). Cell viability was assessed using the eBioscience™ Indo-1 AM Calcium Sensor Dye (65085639, Thermo Fisher) system. Cultured CTCs were incubated with 2 umol/L calcium dye system. With this dye and drug combination, viable CTCs are shown green and dead cells are dark. Imaging was performed with the NIKONE-C1 confocal microscope system.

None of the patients suffered bleeding after the procedure. 14 (48%) subjects reported mild to moderate abdominal pain after the infusion chemotherapy. Our results showed that blood of portal vein could be safely collected by trans-hepatic puncture using 20G needle in clinic. The clinical characteristics of the 29 individuals were listed in Table 1.

Clinical parameters of all included patients 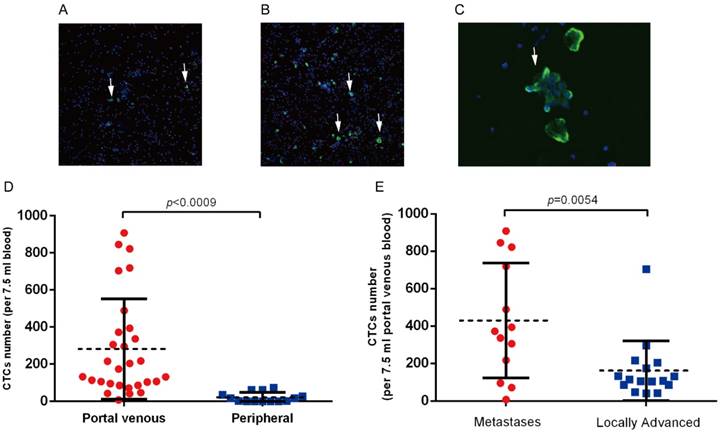 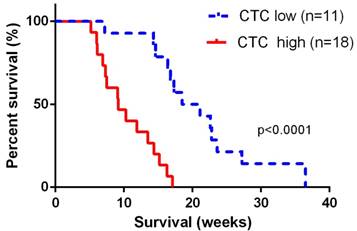 Next, we tried to use CTCs to test drug sensitivity and a panel of single or drug combinations were included. The drug concentration was based on median inhibitory concentration levels identified in previous large-scale cancer cell line screens[30]. The drug test assay was succeeded in 7 (7/29, 24%) patients with relative high CTCs counts in portal vein (Figure 4A). For cases CTC15, CTC17, CTC18, CTC22, CTC28 and CTC29, we carried out reproducible testing for viability in small numbers of cells (20~50 cells) for identified drug dose. The general results showed that portal vein CTCs was highly drug resistant to several standard clinical regimens (Figure 4A). Here we highlight the drug sensitivity test of case CTC12, a patient with portal vein CTCs over 800 per 7.5ml. Portal vein blood was sampled twice during the infusion chemotherapy (Figure 4B). We tested drug sensitivity of the CTCs using eight kind of clinical regimens or compound. Our results showed that the CTCs was highly resistant to standard clinical regimens such as gemcitabine ,5-FU and gemcitabine plus oxaliplatin (Figure 4C,D). We tested the sensitivity of CTCs to deltarasin, a small molecule inhibited the interaction of RAS with PDE-δ and suppresses proliferation of human pancreatic cancer cells that are dependent on oncogenic KRAS. The result showed that CTCs viability was reduced after the treatment of deltarasin. 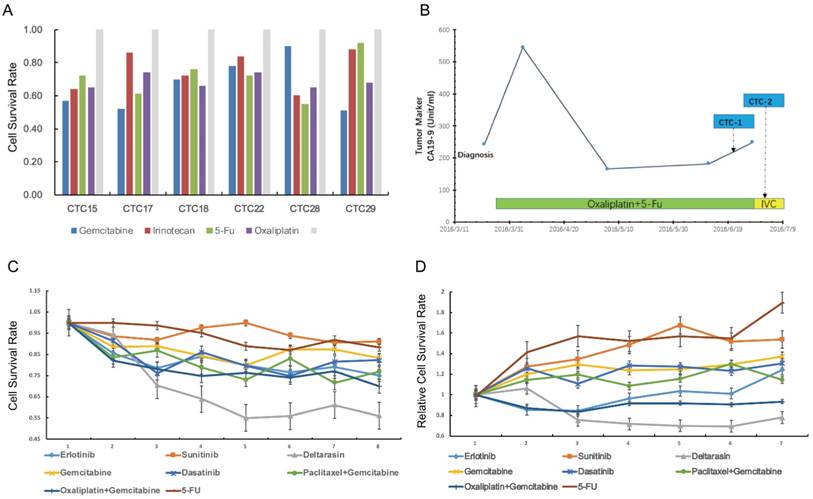 Next, we tried s to test drug sensitivity of CTCs and a panel of single or drug combinations were included. Yu et al first reported ex vivo culture of circulating breast tumor cells for individualized drug test [17]. Their results indicated that the cultured circulating breast tumor cells was resistant to the standard clinical regimens. Herein, our preliminary results also showed that circulating pancreatic tumor cells were highly resistant to gemcitabine and other common clinical regimens. Drug screening of CTCs derived-from portal circulation enable the identification of highly effective therapeutic drugs for prevention and treatment of intrahepatic metastases. Although the application of portal vein sampling and functional testing of CTCs for individualized treatment of pancreatic cancer is still in its infancy, here we demonstrated its feasibility.

Several major limitations of the study should be noted. First, sample size of the pilot study was relative small. Though portal vein CTCs counts was significant correlated with prognosis of advanced pancreatic cancer in the study, clinical studies with large sample size was still needed to further validate the hypothesis. Second, the relative high cost of portal vein blood collection, CTCs identification and drug test may limit the large-scale clinical study. Third, EpCAM or CK19 positive cells were considered as CTCs in our study, however studies have demonstrated that CTCs, especially the cancer stem cell like CTCs, may loss the epithelial markers due to epithelial-mesenchymal transition. The surface antigen markers of circulating pancreatic cancer cells still need further investigation.

In summary, we demonstrated that in patients with advanced pancreatic cancer, detention of CTCs in portal vein was safe and feasible taking the advantage of ultrasonography-guided transhepatic puncture. CTCs counts in portal vein was significantly higher than that in peripheral circulation, and overall survival was significant shorter in patients with portal vein CTCs over 150 per 7.5 ml. CTCs analysis provides a unique tool for studies of metastatic process of pancreatic cancer, as well as mechanisms of drug resistance.

This work was supported by the Rong-Chang Charity Fund of Shanghai Charity Foundation and Zhongshan Hospital Fund for Young Scholars (2015ZSQN31). We are grateful for all staff and subjects participating in the study.

XYL and YC drafted the manuscript and performed the statistical analyses; WXL, YC, CYL, LXL, JHL, TZY contributed to the sample collection and experiment; GPL, GQG, JMC and WHL contributed to clinical management and following-up of patients; GFZ and YZ assessed the radiographic parameters; WXL, YC and LXL conceived of and designed the study, contributed to manuscript revision and had primary responsibility for final content.

35. Baccelli I, Schneeweiss A, Riethdorf S, Stenzinger A, Schillert A, Vogel V. et al. Identification of a population of blood circulating tumor cells from breast cancer patients that initiates metastasis in a xenograft assay. Nature biotechnology. 2013;31:539-44